13 Shocking Examples Of Child Marriages Throughout The World And History

From the Middle Ages to the present, these photos reveal the often overlooked tragedy of child marriages. 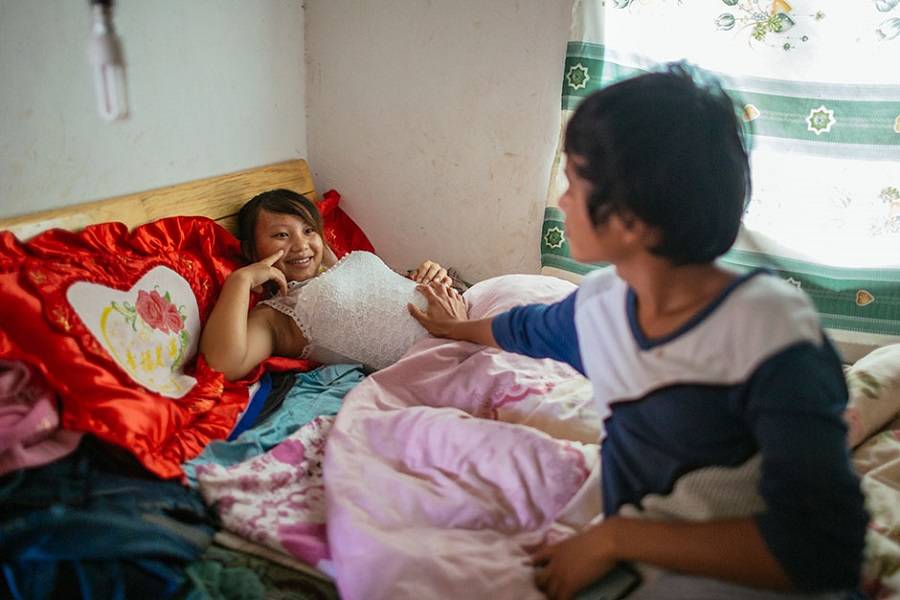 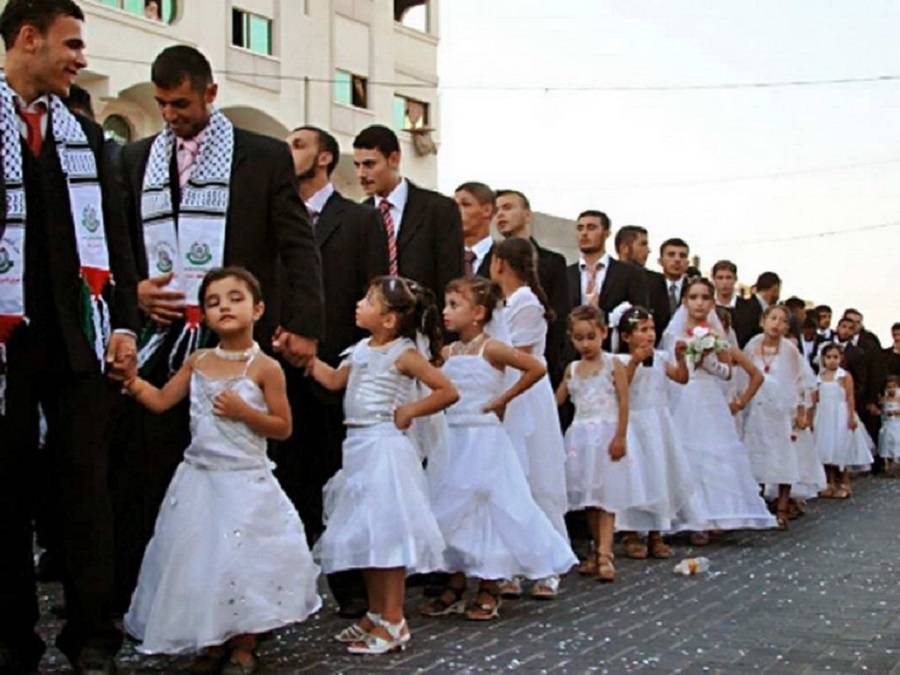 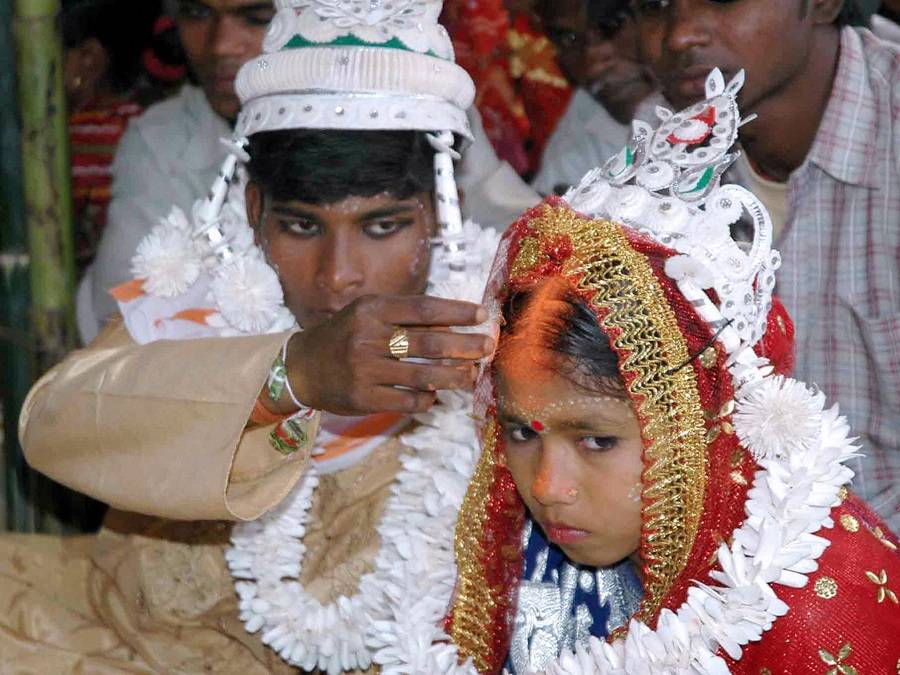 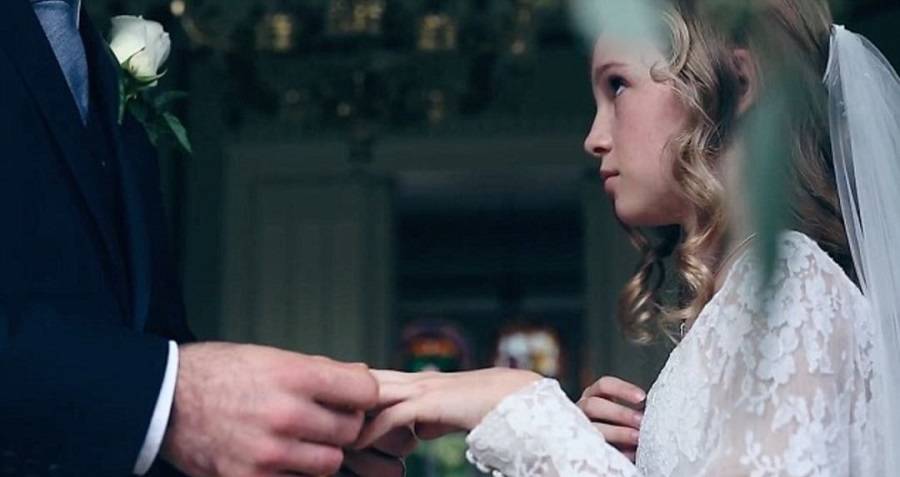 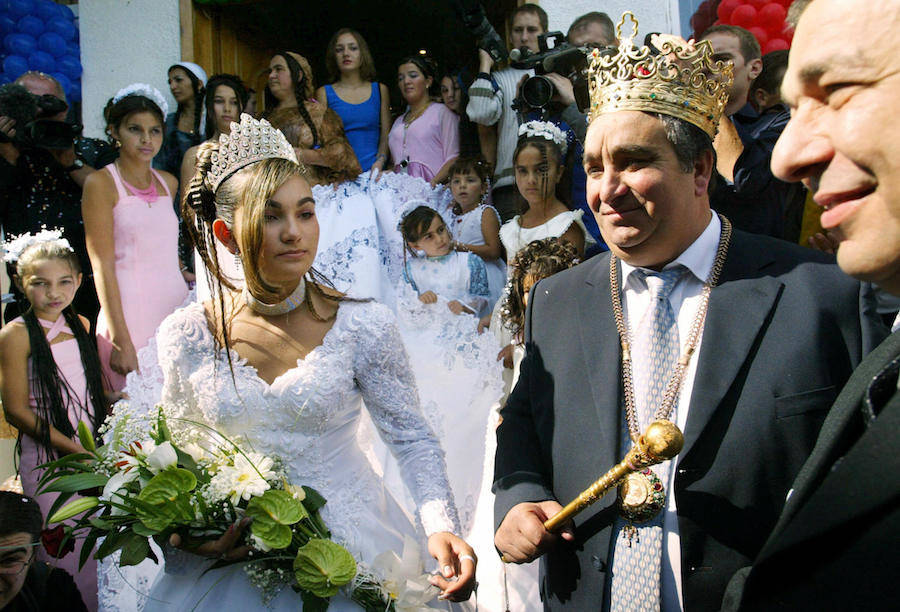 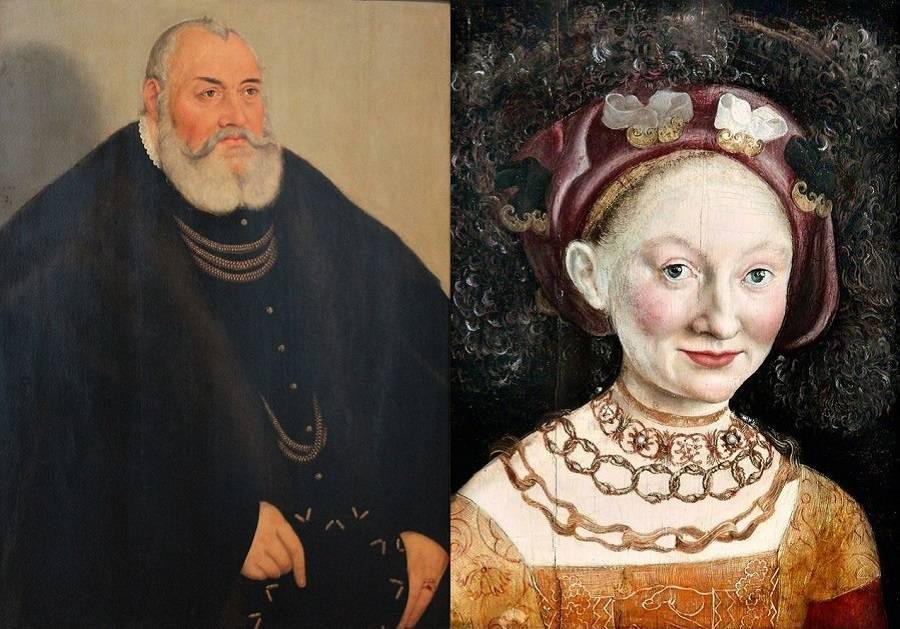 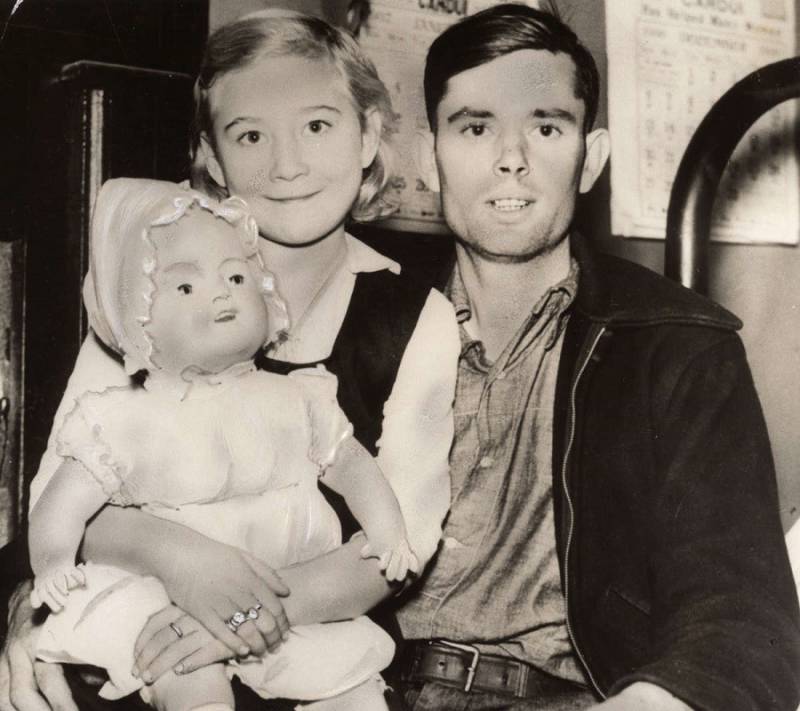 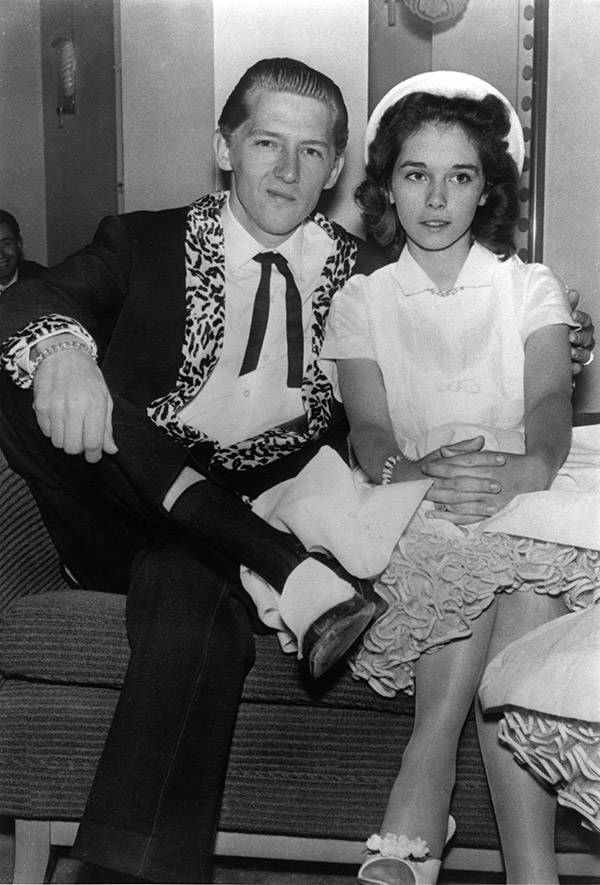 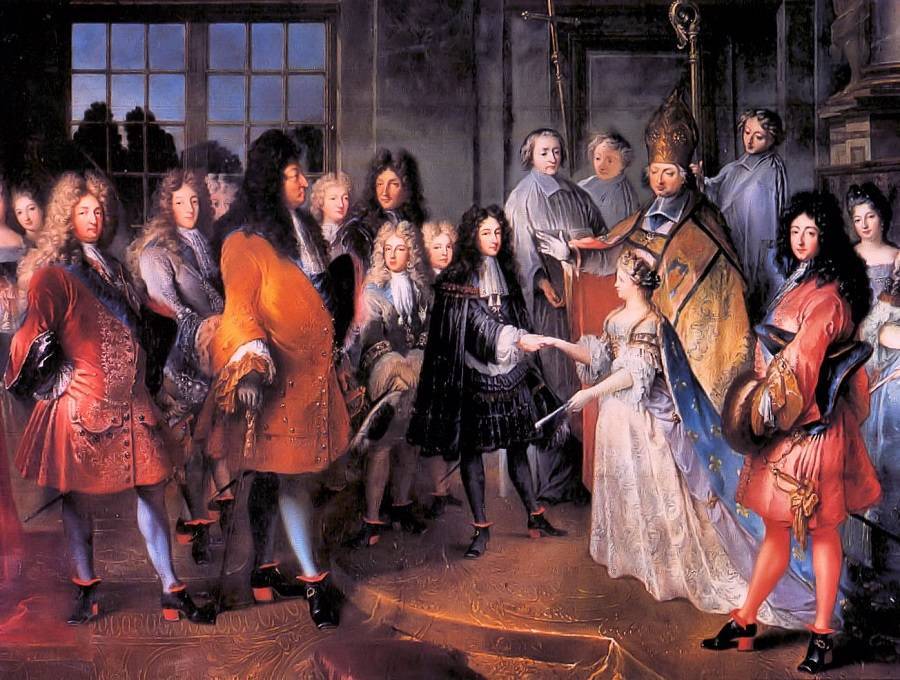 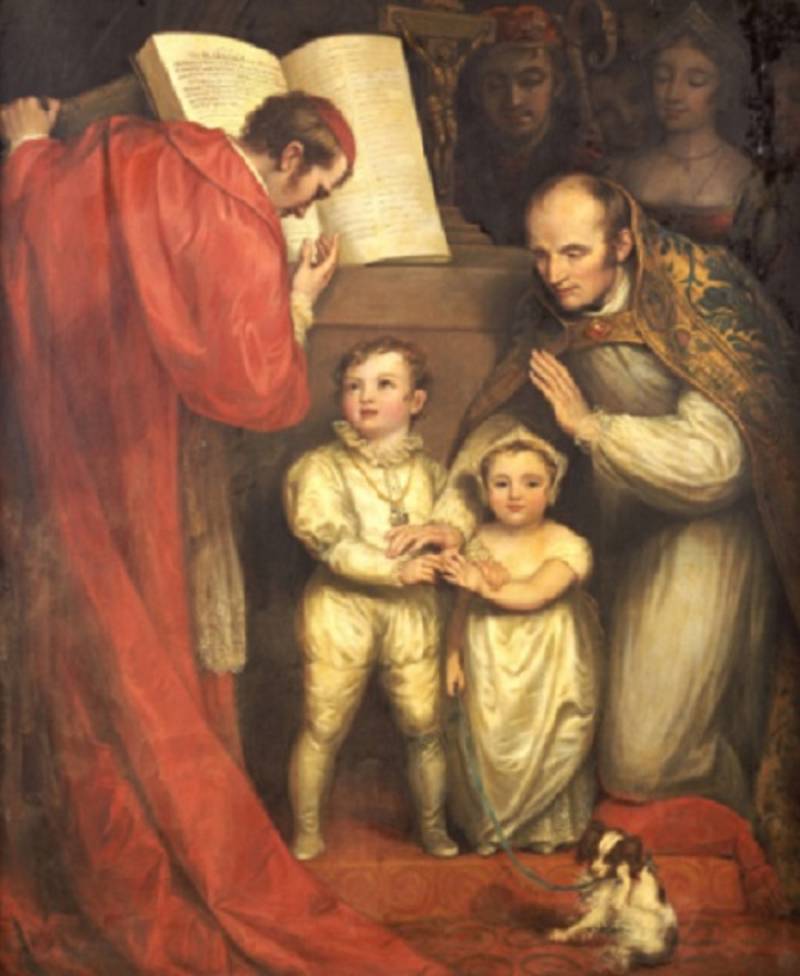 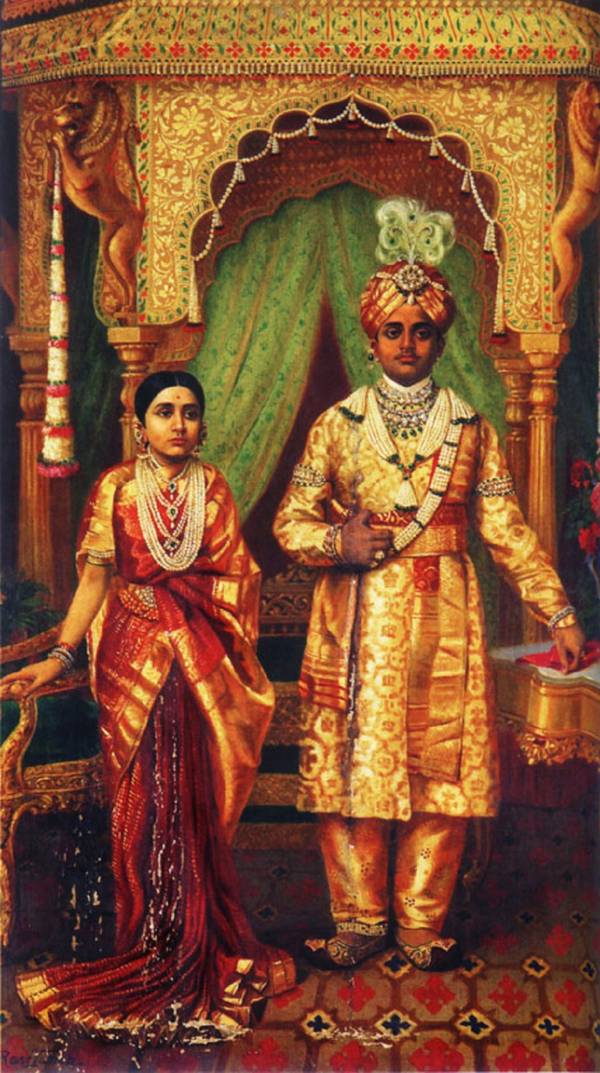 1 of 12
Age of consent laws in China are higher than anywhere else in the world. Women must wait until they are 20, while men must be 22. China heavily monitors these laws in cities. However, China is also home to hundreds of millions of very old-fashioned peasants who barely notice the official laws. In rural China, kids grow up early on the farm, and brides are commonly sold between the ages of 11 and 13. This hurts the bottom line and embarrasses the government, so authorities try to crack down on it when they can. Pictured: an 18-year-old man and his pregnant 13-year-old wife in Yunnan Province.Prioritet
2 of 12
The global standards that Islam sets for marriage age are flexible — because men make the rules in patriarchal cultures. In Yemen, for example, the age of consent is nine, with no restrictions on the age of the husband. Incidentally, this photo shows a mass marriage in Beit Lahiya, Gaza Strip, of 40 men associated with Hamas, who had just been released from prison in Israel. Those girls aren’t their brides, however, they’re relatives who get to dress like the bride according to local tradition. These men wound up marrying women in their late teens and twenties.ForoParalelo
3 of 12
It is believed that up to 12 million Hindu children under 10 years old are currently married in India. There is a clear correlation between illiteracy/lack of education and the likelihood that a boy or girl will be married at this early age. However, India is rapidly developing, and rustic customs like this have hurt economic productivity and are a source of embarrassment for the government. Under centralized authority and international pressure, many farming communities in India have abolished the practice on paper.Wikimedia Commons
4 of 12
Orthodox Judaism permits marriages involving girls that a secular government would probably consider underage. There are thousands of educated scholars who all disagree with each other over the details of the Talmud, but Kiddushin 41a authorizes a man to marry a “na’ara,” which is usually translated as “teen girl.” The verse forbids marriage with a child, but ultra-Orthodox girls still tend to marry very young. However, a 2013 change to Israeli law raised the age of consent to 18 and seems to have driven the practice underground. UNICEF
5 of 12
Among traditional Romani (Gypsies), children are to be married in brokered marriages as soon as puberty starts, which is about 13. British police routinely sweep through their 250,000-strong Gypsy community to find these wedded teenagers and remove them from their parents’ care. In a community that already struggles with literacy and school attendance, the prevalence of 14-year-old mothers who quit school for good has led to mass poverty and chronic unemployment. In this photo, the 14-year-old daughter of the “King of the Gypsies,” Florin Cioaba, is to be married to a 15-year-old boy.DANIEL MIHAILESCU/AFP/Getty Images
6 of 12
While child marriages are a worldwide problem today, the issue is nothing new. In 1533, for example, George the Pious, Margrave of Brandenburg-Ansbach, married the 16-year-old Princess Emilia of Saxony. He was 48 at the time. This was George’s third marriage and it produced four children in 10 years before he died. She outlived him by 48 years.Wikimedia Commons
7 of 12
Marriage rules have long been relaxed in rural mountain communities across the U.S., including the Tennessee area where Charlie and Eunice Johns lived as a couple. In 1937, then nine-year-old Eunice slipped away from her parents’ farm at night and ran away to 22-year-old Charlie’s nearby place. Taking advantage of a loophole in Tennessee law (since closed), they married. Charlie and Eunice had known each other and been friends for years, and they seem to have gotten married largely so that Eunice could quit school, where she had been flogged for disrupting class. The marriage produced a few children (years after the wedding) and lasted until Charlie’s death in the 1990s. Wikimedia Commons
8 of 12
In 1958, celebrated rock star Jerry Lee Lewis was discovered to have married his cousin, 13-year-old Myra Brown. It was the 23-year-old Lewis’ third marriage (he had, himself, first been married at 16), and it lasted until 1970. Public outrage over the relationship nearly destroyed Lewis’ career. He was blacklisted so much so that he dropped from making $10,000 a night in huge venues to maybe $250 in small clubs. Even an anonymous instrumental recording he did wound up getting pulled when people identified Lewis’ distinctive piano style in the big band arrangement. Keystone-France/Gamma-Keystone/Getty Images
9 of 12
Child marriage has an ancient history almost everywhere, and it has historically been common among wealthy and powerful families, who would often trade their children for political alliances. This scene commemorates the 1697 marriage of the 12-year-old Marie of Savoy to 15-year-old Louis XV of France. The union brought the houses of Savoy and Bourbon together and may have prevented war.Wikimedia Commons
10 of 12
During the Middle Ages in Italy and England, warring families routinely married off their very young children to make alliances. It was typical for these couples to “get engaged” at what we consider preschool age, and then to formalize the marriage before age 10. The kids would then return to their respective parents’ homes until they were ready to cohabit, around age 15 or 16. This image depicts the wedding of six-year-old Anne de Mowbray, 8th Countess of Norfolk to four-year-old Richard of Shrewsbury, Duke of York. Both died before their 10th birthdays in the War of the Roses. Wikimedia Commons
11 of 12
200 years after the wedding of Louis and Marie, 16-year-old Prince Krishnaraja Wadiyar IV married the 12-year-old Rana Prathap Kumari. Years later, the couple would be named King and Queen of Mysore, India.Wikimedia Commons
12 of 12 An unusual event took place in New York’s Times Square early in 2016. Inside a blocked-off area, behind a cordon of security personnel, a 65-year-old man in a tuxedo posed for a professional photo shoot with a 12-year-old girl in a wedding dress.

When onlookers asked what was going on, they were told that the pair were a newly married couple celebrating their wedding day. Gradually, the crowd grew angry and abusive, hurling insults at the man and with a few male bystanders trying to rush the barricades to get at the “groom.”

The scene rapidly became dangerous, and the photographer — who was actually 20-something YouTube prankster Coby Persin — eventually came clean and told the crowd that it was just a demonstration with a paid child actress.

What Persin was demonstrating, apart from reckless disregard for public safety, was the phenomenon of child marriages, in which girls as young as nine — and sometimes younger still — are betrothed to men many times their age.

UNICEF estimates that as many as 700 million women alive today were married to adults before they themselves were 18 and that 156 million men were married as underage boys. This practice is often particularly damaging to the girls, as their education and opportunities for work usually end with their marriage.

For very young brides, there is also the emotional trauma of early sexualization, as the grown man they’ve married consummates the relationship right away. Likewise, there is the medical danger of pregnancy at such a young age. 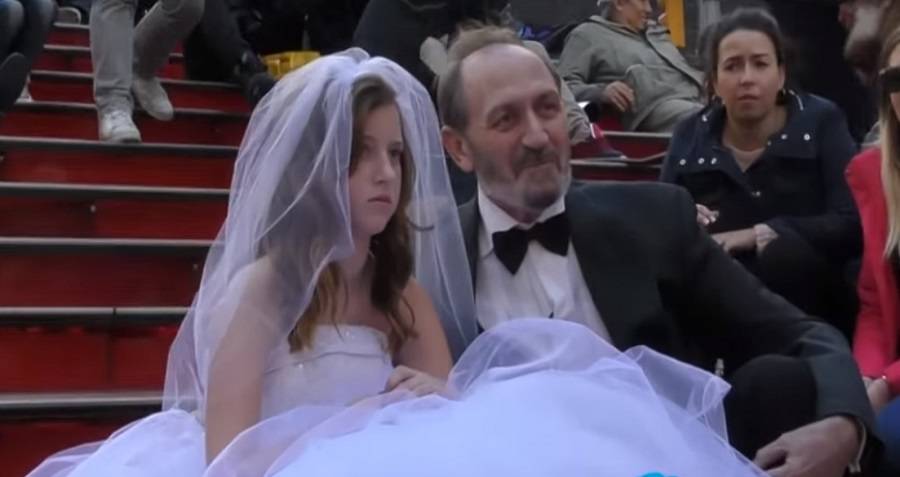 Despite these problems, child marriages remain common in many places around the world. In some cultures, child marriages are a venerable ancient tradition that brings families together and helps prevent violent conflicts, while for others, they are a sacred religious obligation.

Many communities regard girls’ education as a luxury or even as a waste of resources, and more than a few outright reject the idea that waiting for adulthood to marry is in the best interests of a girl.

On top of that, a seedy underground of child prostitution has grown up around the world, where young ladies are temporarily “married” to an older man, often one with an already-established family, and then discarded in a few weeks or months, when their “husbands” divorce them.

Above, in photos, is a look at child marriages around the world today and throughout history.

After this look at child marriages, read about wife selling, the 19th century alternative to divorce. Then, read about the weirdest wedding traditions around the globe.