Christina Whittaker vanished without a trace from her hometown of Hannibal, Missouri in November 2009 — and her mother believes human traffickers may be to blame.

On the night of Friday, November 13, 2009, Christina Whittaker went missing from Hannibal, Missouri. The historic town is known as the childhood home of author Mark Twain, but Whittaker’s mysterious disappearance brought the city into the public eye for far more sinister reasons.

Some even say the town itself holds secrets about the night the 21-year-old woman vanished. 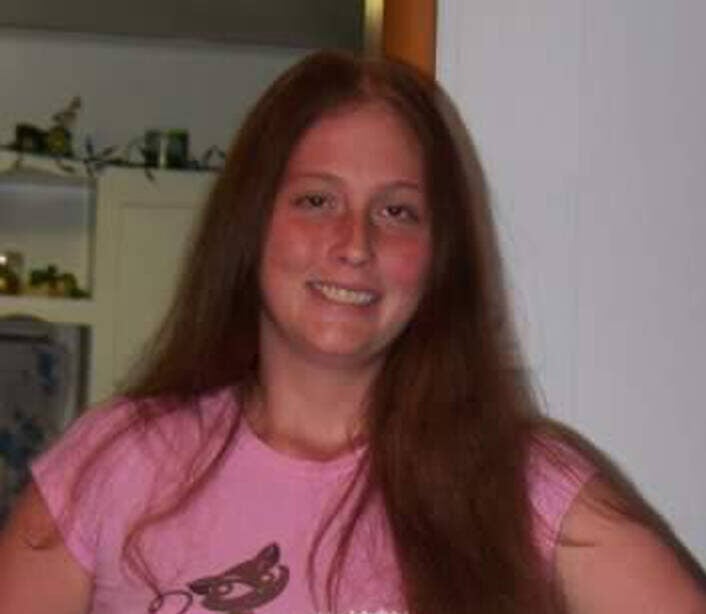 HelpFindChristinaWhittaker/FacebookChristina Whittaker before going missing in 2009.

Whittaker was a young mother to her newborn daughter, Alexandria. In preparation for her first night out after giving birth, she asked her boyfriend, Travis Blackwell, to watch the six-month-old girl at her mother’s house for the evening. He agreed and dropped Whittaker off at Rookie’s Sports Bar between 8:30 and 8:45 p.m. Her friends were there waiting for her.

From there, the story gets a little murkier. But by the end of the evening, Christina Whittaker had disappeared, and each theory about what happened to her that November night in Hannibal is stranger than the one before it.

The Disappearance Of Christina Whittaker

The first solid piece of evidence from Christina Whittaker’s fateful night out is a phone call. Records show that Whittaker called Blackwell at 10:30 p.m. and offered to bring him food later. She said she would be home around midnight and told him that she would call him back if she couldn’t find a ride.

According to Las Vegas World News, witnesses reported that Whittaker was kicked out of Rookie’s at 11:45 p.m. for belligerent behavior. Her friends refused to leave with her because, as one of them put it, they “didn’t need to go to jail.”

Patrons of other nearby bars then reported seeing Whittaker soon after. She entered River City Billiards and then Sportsman’s Bar to ask friends and strangers alike for a ride, but nobody offered to take her home.

The bartender at Sportsman’s Bar that night was Vanessa Swank, a Whittaker family friend. She recalled that Whittaker arrived at her establishment just as they were getting ready to close.

Swank claimed that Whittaker was arguing with someone on the phone. A couple of minutes later, she turned around to see Whittaker sobbing and running out the back door of the bar.

That was the last time anyone ever saw her.

The next morning, when Blackwell woke up and realized his girlfriend had never returned, he called her mom, Cindy Young. Young was out of town but immediately began heading home when she learned that her daughter was missing. Blackwell quickly arranged for a family member to watch baby Alexandria so he could go to work.

Sometime on Saturday morning, a man found Christina Whittaker’s cell phone on the sidewalk outside an apartment complex near Sportsman’s Bar. This is the only piece of physical evidence in the case, and unfortunately, it went through multiple sets of hands before it finally reached authorities. No useful evidence was recovered. 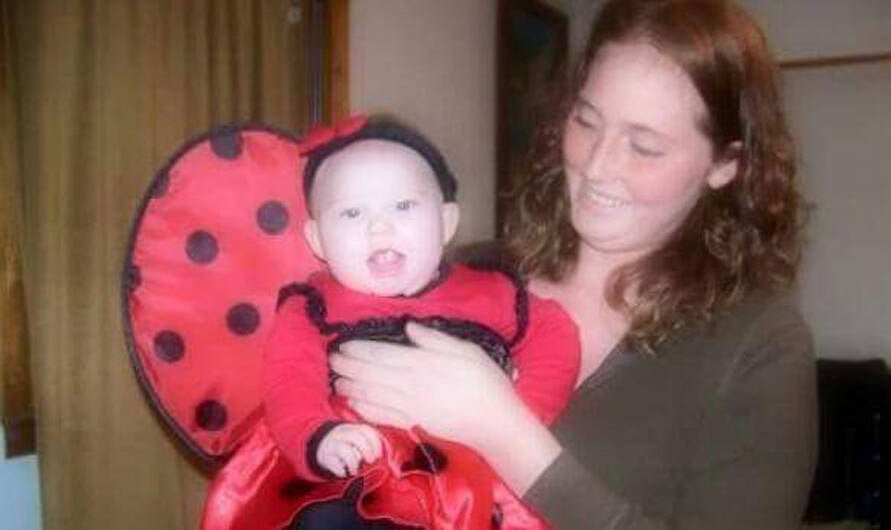 HelpFindChristinaWhittaker/FacebookChristina Whittaker with her daughter, Alexandria.

Many people find it strange that nobody reported Whittaker missing until Sunday, more than 24 hours after she disappeared.

Chellie Cervone with Las Vegas World News wrote, “A 21-year-old girl who is the mother of a six-month-old baby and who allegedly either speaks to or sees her mother daily just ups and disappears, but she wasn’t reported missing right away can, I’ll admit, seem strange.”

Captain Jim Hark of the Hannibal Police Department, though, says it’s not as odd as it may appear. “It’s not uncommon to have a person gone for a day or two, but after that, we start taking a hard look at what is going on.”

There are many unknowns surrounding the night Christina Whittaker vanished. According to Investigation Discovery, even reports of Whittaker’s exit from Rookie’s Sports Bar vary.

The bartender said Whittaker was becoming combative and was escorted out the back door. The bouncer claimed he saw her come back in briefly with another male. And yet another witness told police that Whittaker left the bar with three or four men.

Meanwhile, one of Whittaker’s friends said she saw Whittaker talking to two males in a dark car outside Rookie’s before she was asked to leave.

A docuseries called Relentless details the rumors that flew around Hannibal following Whittaker’s disappearance. Christina Fontana, the independent investigator and filmmaker behind the series, noted, “In Hannibal, Missouri, it seems like everyone’s got something to hide.”

There is talk Whittaker was mixed up with drugs, that she was operating as a confidential informant for a police department, and even that she was involved in a sexual relationship with police officers in Hannibal.

“There are also a lot of what-ifs flying around,” Fontana said according to Fox News. “Maybe she wanted to leave home because of certain things. Maybe people wanted to harm her because of certain activities that were going on in her life that we uncover in the show. This is a very small town of about 17,000 people. When you engage with the locals, they all have one thing in common to say — there are a lot of rumors in Hannibal. And nothing is what it seems.”

Whittaker’s friends had previously claimed that she and Blackwell had a history of domestic violence, and Steve Wilkos accused Blackwell of failing a polygraph test that had been performed before filming.

“I know he would never do anything to hurt her,” Young told the Herald-Whig. “He was here that night Christina disappeared. My son and his girlfriend were right across the hall. He was here.”

One theory Young does believe is that her daughter was a victim of human trafficking. Within two weeks of Whittaker’s disappearance, an informant told police that a group of men who dealt in sex work and drugs had kidnapped Whittaker and taken her to Peoria, Illinois, where she was being forced to work in the sex industry.

According to KHQA News, a store clerk in Peoria believes she saw Whittaker after she was reported missing. And a waitress in the city thinks she spotted her just days after she vanished from Hannibal. “It was definitely her. I’m 110 percent sure,” she said.

But the sightings don’t end there. Another woman claimed she spent time with Christina Whittaker in a local mental hospital, where Whittaker confided in her about her life as a forced sex worker. And even a member of Peoria’s police narcotics unit thinks he may have run into her in February 2010, but she ran away before he could confirm her identity.

Officer Doug Burgess of the Peoria Police Department said, “We don’t have any confirmation that she’s in the area,” but Young is still convinced otherwise.

Yet another theory suggests that Whittaker may have vanished on purpose. According to the Charley Project, Whittaker’s mother said her daughter took medication for bipolar disorder irregularly and had made suicidal statements before her disappearance.

Some believe her medications mixed poorly with the alcohol Whittaker drank and potentially caused extreme confusion. Did she accidentally fall into the nearby Mississippi River and drown? Did she try to walk home in the 39-degree weather and succumb to hypothermia? Despite extensive searches, no body ever has turned up. 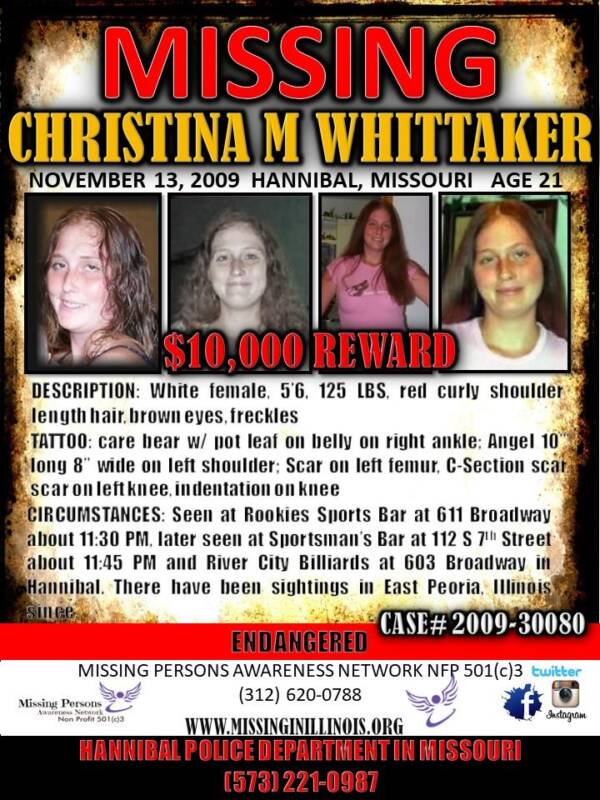 Cindy Young chooses to believe her daughter is alive, and she still travels to Peoria to look for her. “I know she was taken,” Young told the Hannibal Courier-Post. “She’s told different ones she is not allowed to see her family or come back to Hannibal… At that time she was not free.”

Though everyone in the small town of Hannibal has their own theory about Christina Whittaker’s mysterious disappearance, police are no closer to solving her case than they were the night she vanished nearly 15 years ago. At the time of publication, Whittaker is still missing, and anyone with knowledge of her whereabouts should contact authorities.

After reading about the disappearance of Christina Whittaker, find out how police found Paislee Shultis nearly three years after she was kidnapped. Then, read about the possible discovery of Johnny Gosch, one of the first children to appear on a milk carton.