Jackie Robinson Jr. tragically died at age 24 — just a year before his legendary father — in a horrific car accident in Connecticut on June 17, 1971. Jackie Robinson Jr., the firstborn of Baseball Hall of Fame player Jackie Robinson, met an untimely death on June 17, 1971, in a fatal car accident. Born just five months before his father made history and dying just a year before him, Jackie Robinson Jr.’s life embodied much of both the good and the bad of mid-20th century life in the United States.

Jackie Robinson Jr. Was Born Just Before His Dad Made History 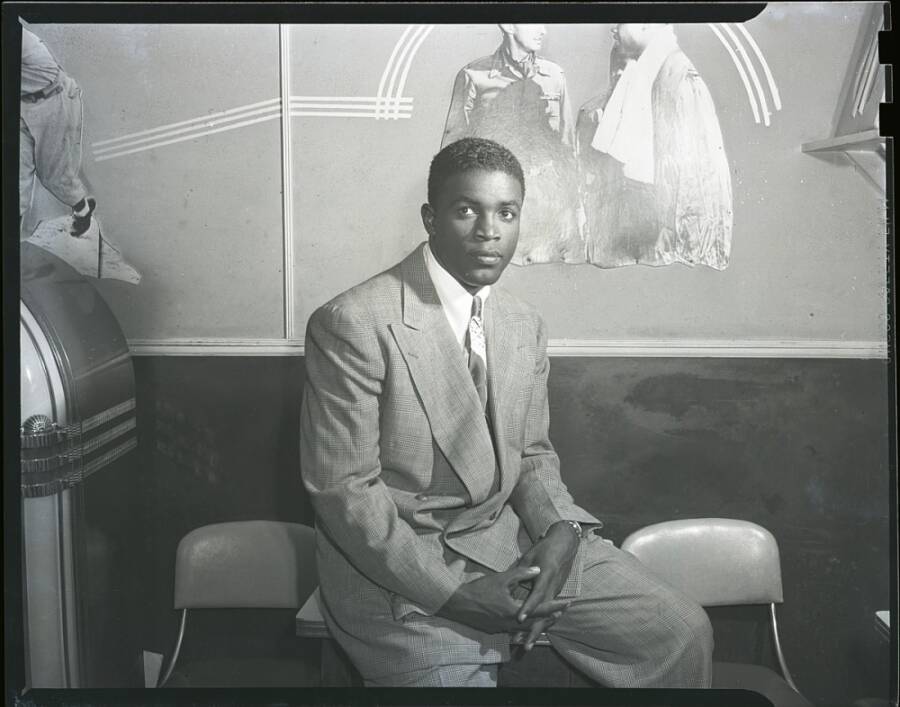 Jackie Robinson Jr. was born on Nov. 9, 1945 to Jackie and Rachel Robinson. By the time he was born, his father had broken countless records and had gained the attention of the big leagues. When Jackie Jr. was 5 months old, his father was drafted to the Brooklyn Dodgers, and the family made the cross-country move from Los Angeles to New York.

Jackie Jr. had some challenges as a child and his parents put him into a special education program to ensure he could have the best life possible. As he grew up, so too did his father’s career and the family. Robinson became an international sensation after breaking the color barrier in Major League Baseball, and soon was traveling with the Dodgers and for other events away from the family.

Though he succeeded academically, Jackie Robinson Jr. needed more structure in his life than his famous family could provide. He attended Rippowan High School in Stamford, Connecticut, for a short time before dropping out and enlisting in the army.

Life After Returning From Vietnam

The army provided the much-needed stability in Jackie Jr.’s life and he spent three years enlisted, with a good portion of that time in Vietnam. At the same time, his father publicly supported Lyndon B. Johnson, whose popularity had dropped substantially as the U.S. involvement in Vietnam grew.

While serving in Vietnam on Nov. 19, 1965, Jackie Jr. was wounded in action while saving a comrade under heavy fire and was struck by shrapnel. He sustained injuries from the debris and, unfortunately, his fellow soldier did not survive. Once he had healed enough to travel, he was discharged and came back home.

Like many soldiers who either enlisted or were drafted to fight in Vietnam, Jackie Jr.’s reception was not as welcoming as the previous generation’s homecoming had been. The war itself had largely fallen out of favor with the public. TV broadcasts brought the realities of war to people’s living rooms, and returning soldiers like Jackie Jr. often felt isolated or misjudged.

Though Jackie Jr. recovered from his injuries, he returned home in 1965 with a new set of challenges. Not unlike other soldiers in Vietnam, he was introduced to widely available drugs during his deployment. His family believed that he became addicted while enlisted. However, it was known that soldiers often sent drugs home and made them available to soldiers who had grown dependent on them.

Whether he returned home already struggling with his sobriety or if he began using when he came back home as a means to cope with his experience in Vietnam, Jackie Robinson Jr. quickly sought help for his addiction in 1965. He checked into the Daytop Village treatment facility in Seymour, Connecticut, just a short drive from his parents’ home in Stamford.

He spent two years at the facility, completing treatment in 1967 at 20 years old. Daytop Village had an important impact on his life and recovery, and he began working at the center. He often spoke to youth groups about the effects and dangers of drug use, drawing on his own addiction as an example.

In support, his father did the same using his notoriety to push anti-drug education.

Having found a place he belonged, Jackie Robinson Jr. soon became the assistant director of Daytop Village, working to impact his community for the better.

However, on June 17, 1971, he was traveling at high speed toward his parents’ home when he lost control and crashed through a fence and into a bridge near Route 123 on the Merritt Parkway.

He was pronounced dead at the scene. His brother David identified him at the nearby Norwalk Hospital. Jackie Robinson Jr. was just 24 years old.

Though he struggled to find a place to fit in for much of his life, Jackie Robinson Jr. persevered just like his namesake. Growing up in the limelight with a famous father, seeing the realities of war, and returning to a place that he could not quite call home led Jackie Jr. down a difficult path. Through much adversity, he was able to overcome addiction, war injury, and family struggle to carve out a space all his own.

After reading about Jackie Robinson, Jr., learn more about Louis Zamperini, the legendary Olympian who became a World War II hero. Then, read about Adelbert Waldron, the deadliest sniper of the Vietnam War