The Story Of Christine Keeler, The Showgirl Whose Affair With A Politician Shook Up Mid-Century Britain

In 1963, a British dancer named Christine Keeler found herself at the heart of a national debacle known as the Profumo Scandal — which nearly destroyed her life. 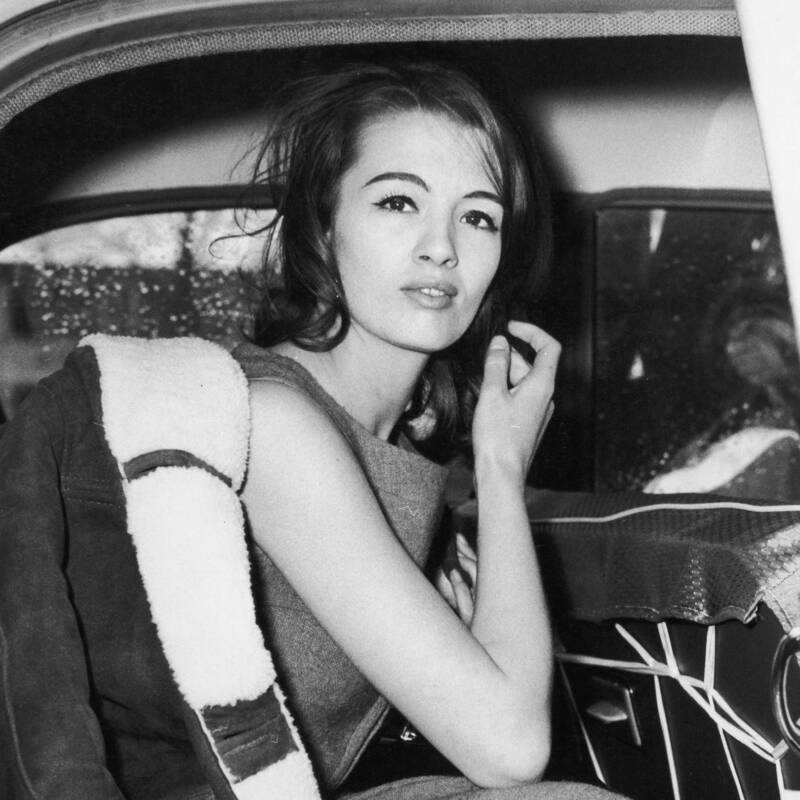 Getty ImagesChristine Keeler was a struggling dancer when she met one of Britain’s most powerful politicians, John Profumo.

At a pool party at a grand country estate outside of London in 1961, Britain’s Secretary of War John Profumo fatefully met Christine Keeler, a 19-year old showgirl and aspiring model.

What followed was an affair as short as it was intense, and though it ended just a few months later, it spelled ruin for both parties in the years to come.

Now known as the Profumo Affair, the cataclysmic summer fling defamed Profumo and catapulted Keeler to the center of British society, where she was deemed the 20th-century’s most notorious harlot. Though both struggled to rehabilitate their careers, they never did — and their brief scandal upended an entire political party.

How An Impoverished Dancer Fell In With High Society 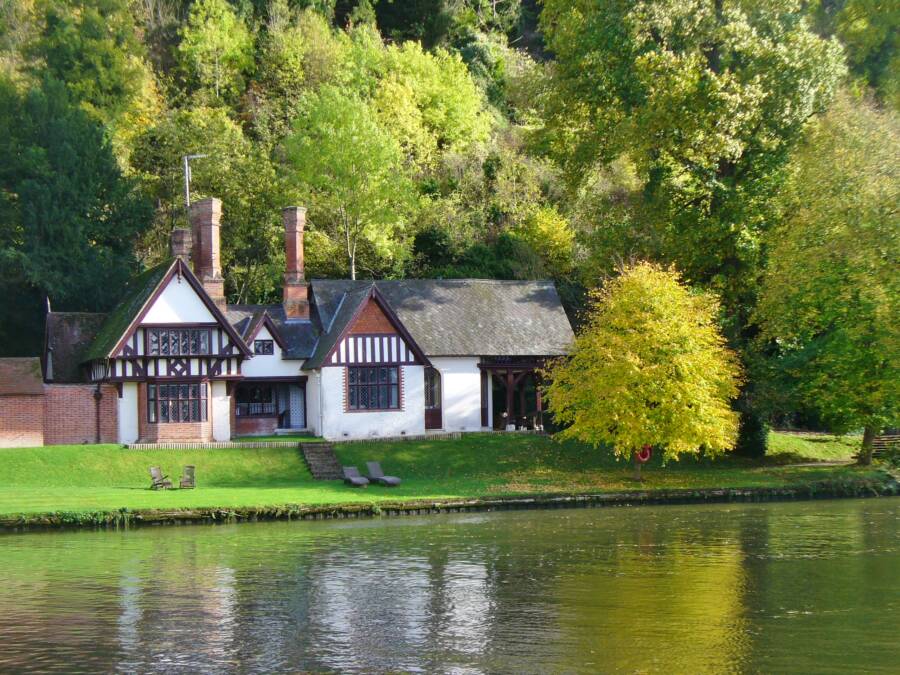 Wikimedia CommonsThe Spring Cottage at the Berkshire estate of Cliveden was leased to Stephen Ward for a nominal rent of one pound per year.

In 1957, Christine Keeler was working as a stage dancer at a Soho club when she caught the eye of Stephen Ward. An osteopath who reveled in fashionable society, art, and working-class girls.

Ward’s patients included many celebrities and powerful people of the day, including ex-Prime Ministers Winston Churchill and Anthony Eden, European royalty, and film stars such as Elizabeth Taylor and Frank Sinatra. But he was also a reputed pimp. He often invited young women to stay in his Notting Hill flat — or introduced them to the wealthier socialites he knew.

He claimed to never have sex with these women, but instead depended on them for company, having lived alone after his short marriage ended in 1949. Indeed, Keeler later described their relationship as “like brother and sister … I used to do more or less everything that he said. I thought I could never stand on my feet unless he was there and supporting me mentally.”

Keeler, on the other hand, had been raised in a pair of converted railway cars outside of London by her mother and sexually possessive stepfather. Vulnerable, longing for work as a model but stuck waitressing and dancing, she was just Ward’s type.

By 1960, Keeler had not only moved in with Ward, but was finding other women to do the same. She befriended 16-year-old fellow showgirl Mandy Rice-Davies, who soon after moved in with the pair. By night, the trio lived it up in London’s nightclubs, hobnobbing with friends both fashionable and seedy.

While Rice-Davies seemed content with her lot, Keeler reportedly began to dream of bigger and better things. 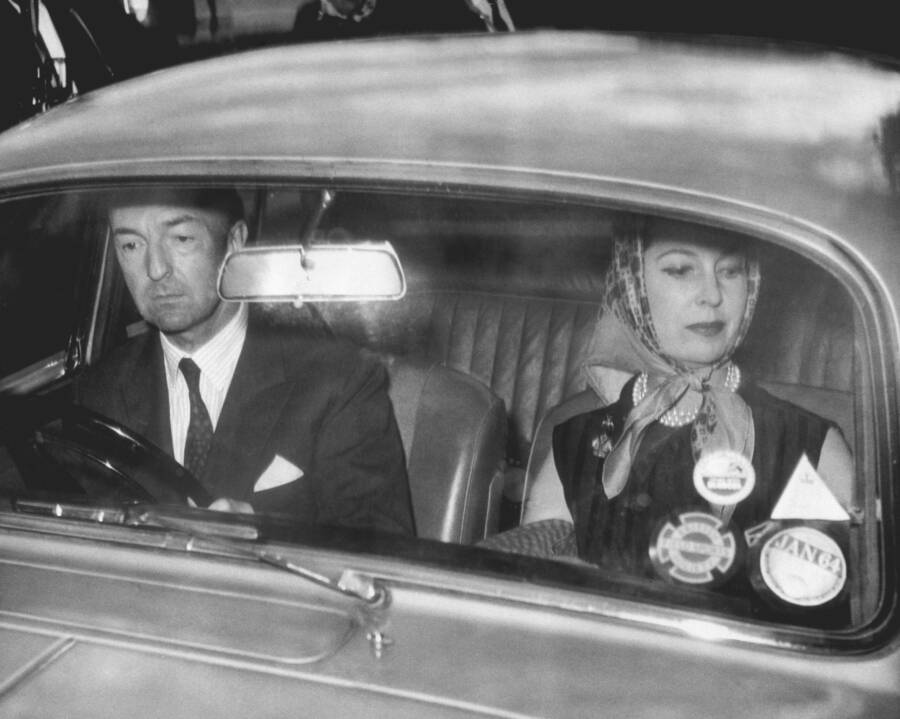 Getty ImagesJohn Profumo with his wife, Valerie Hobson, just after his resignation on June 18, 1963.

Keeler would get her chance at a lavish pool party in 1961.

The venue was supplied by one of Ward’s patients, Lord William Astor, heir to the famed American Astor family. The two hit it off, and Astor offered Ward the use of a cottage at Cliveden, his vast 18th-century manor in Buckinghamshire.

He also generously allowed Ward the use of the swimming pool there for parties.

And so on Saturday, July 8, 1961, one of these parties coincided with a formal diplomatic gathering at the main house. Present as representative of the government was John Profumo, the Secretary of State for War and a rising political star with a key role in the prime minister’s Conservative government.

That evening, as Lord and Lady Astor led their distinguished guests on a walk around the gardens, Profumo spotted Keeler, who’d lost part of her bathing suit in a prank. According to Profumo, Astor, by way of introduction, cheerfully slapped Keeler’s rear end and told him “Jack, this is Christine Keeler.”

Profumo felt an immediate attraction to her, despite later cruelly describing her as a “common tart.”

But at the same party was Yevgeny Ivanov, a Soviet naval attaché whom British counterintelligence wanted Ward to gather information from. Ivanov drove Keeler back to London that day where they presumably had sexual relations. Then on Monday, July 10, Ward called his MI5 handler and made his report.

Keeler’s relationship with Ivanov and Profumo would strike fear in the Parliament of a breach of national security. 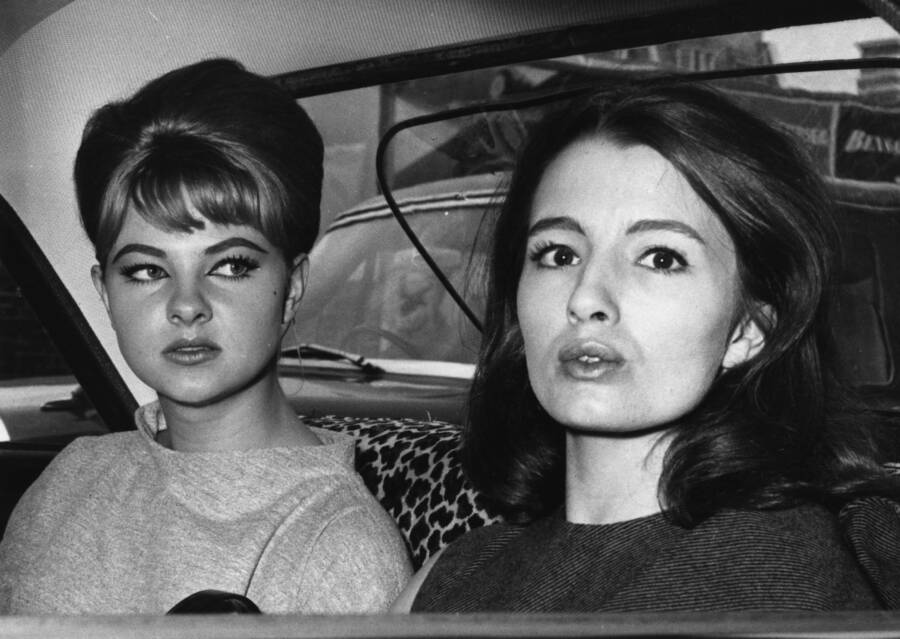 Just a week later while his wife, actress Valerie Hobson, was away, Profumo telephoned Keeler and arranged for a meeting.

That was the first of several encounters they had for sex, during which he gifted Keeler a cigarette lighter, £20 for her mother’s birthday, and some of his wife’s perfume to avoid rousing her suspicion.

As the relationship progressed, Profumo committed several blunders that would give away his affair in his efforts to impress Keeler. He borrowed a fellow Member of Parliament’s Bentley for a ride and sent her letters carelessly written on official War Office stationery.

The affair didn’t last long however, and both Keeler and Profumo offered differing accounts of when, exactly, it ended. Profumo claimed that he ended it by letter in August of 1961, while Keeler claimed that it carried on until October.

In either case, it ended quickly, and neither imagined that the affair would come back to haunt them. Keeler began to pick up small modeling jobs and felt hopeful about her future, even moving out of Ward’s home and into her own flat.

She even moved on romantically and started relationships with Antiguan jazz promoter Johnny Edgecombe and Jamaican-born singer Aloysius “Lucky” Gordon. However, the two men had an intensely jealous row over Keeler.

Keeler, meanwhile, suffered verbal and physical abuse from both boyfriends and abandoned Gordon for Edgecombe altogether, who eventually attacked Gordon with a knife in October 1962.

In December, Keeler left Edgecombe too, but he tracked her down when she went to visit Mandy Rice-Davies at Ward’s house — and fired several pistol rounds at the front door.

The Profumo Scandal Comes To Light 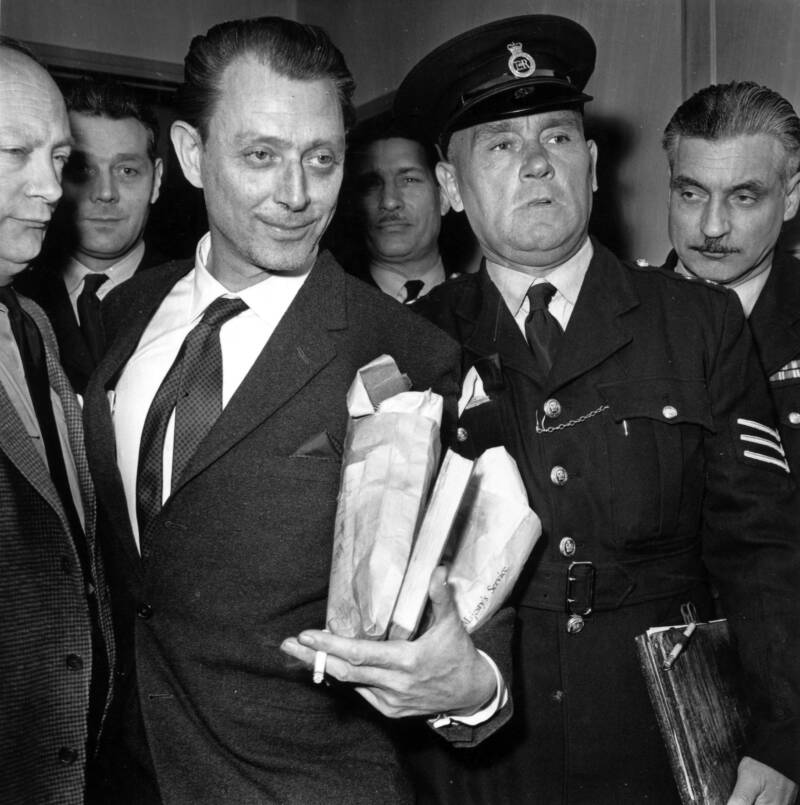 As Edgecombe and Gordon were consequently brought to trial for their scandal, police and tabloid journalists picked up on a much more salacious story. To her surprise, Keeler was asked about her relationship with Profumo during Gordon’s trial, and denied it on record.

In fact, celebrity rags had already published anonymous jokes about the minister and the showgirl, but none had had the nerve to print the story in full.

Then, Christine Keeler attempted to reveal her version of the events by selling the rights to the story to the Sunday Pictorial for about $30,000 in January 1963. Rice-Davies also began speaking to journalists, and although Profumo and Ward managed to nix their involvement in the scandal, the rumors started flying through government and press circles anyway.

Eventually, word of the scandal reached Prime Minister Harold Macmillan. To dispel the rumors, Profumo was forced to make a statement in the House of Commons on March 22, 1963:

“I last saw Miss Keeler in December, 1961, and I have not seen her since … Miss Keeler and I were on friendly terms. There was no impropriety whatsoever in my acquaintanceship with Miss Keeler … I shall not hesitate to issue writs for libel and slander if scandalous allegations are made or repeated outside the House.”

But the scandal didn’t end there. Politicians worried that the connection between Keeler, the Soviet naval attaché Ivanov, and Profumo might have been a serious breach of national security.

In an attempt to save Ivanov, Ward admitted several damning details to a politician who passed them onto the government. High-ranking members of the government met on March 27 and agreed that Stephen Ward made the perfect scapegoat to diffuse the situation.

Indeed, under the 1956 Sexual Offenses Act, any man who introduced a woman under the age of 21 to another man for sexual purposes was automatically guilty of causing prostitution.

Although Ward had indeed introduced Keeler, Rice-Davies, and several other young women to any number of men, there was no evidence that he’d acted as a pimp. But that didn’t stop prosecutors from attempting to pin the whole affair on him.

They thus argued that the money Profumo had gifted Keeler, which she consequently paid to Ward, constituted “immoral earnings.” 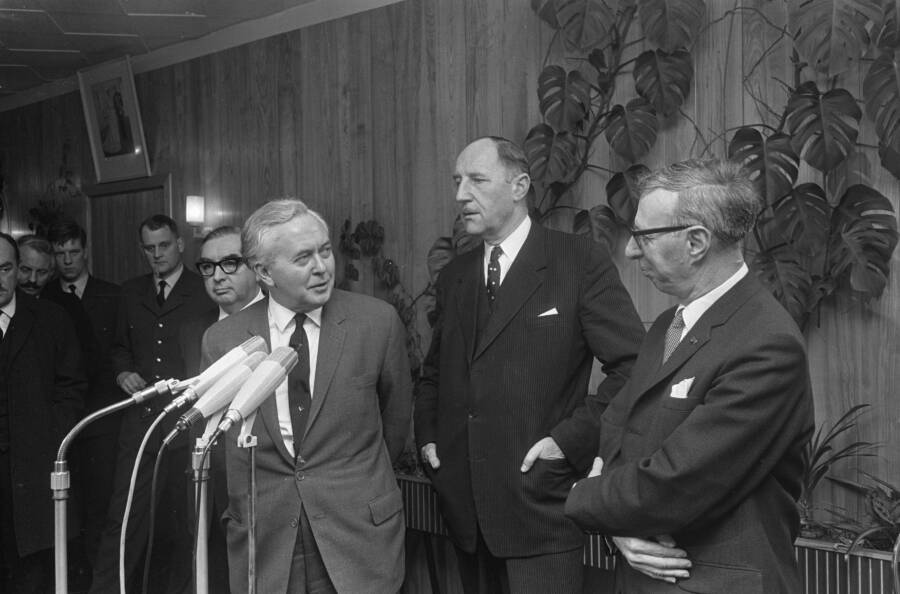 Profumo himself, under mounting pressure, was on a trip to Italy with his wife when he was summoned back to London. He admitted the truth to his wife and to Macmillan’s secretary back home and offered his resignation on June 4, 1963.

While recovering from an operation, Macmillan, under mounting pressure from his party, also stepped down in October 1963 — thus ending an entire cabinet with just one sexual scandal.

The Tragic Fallout Of The Profumo Scandal 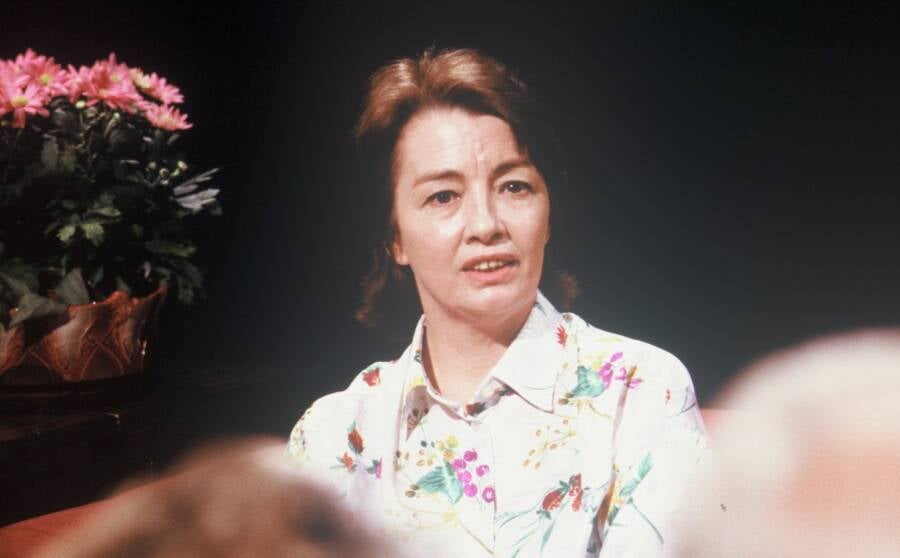 In 1988, after years of disgrace, Keeler appeared on the late-night talk show After Dark to explain her side of the Profumo Scandal.

Stephen Ward’s trial was turned into a circus by sensationalized press coverage which leaned heavily into the raciest aspects of the story.

Rice-Davies, when told as a witness in Ward’s trial that Lord Astor had denied ever meeting her, famously retorted, “Well he would, wouldn’t he?”

Ward was convicted of the immoral earnings charges despite earning the modern equivalent of over $163,000 from his practice alone. Days before his sentencing, Stephen Ward intentionally overdosed on barbiturates and died in the hospital, aged 50.

It would be years before the Conservative Party recovered from the damage of the affair. In the 1964 general election, the party lost narrowly to Harold Wilson of the Labour Party. There wouldn’t be another Conservative Prime Minister until Margaret Thatcher’s election in 1979.

During each of the trials, and in the House of Commons, Keeler suffered the most abuse. Branded an opportunist and derided as a prostitute, she was portrayed in the media as a greedy vamp who’d targeted a respectable public figure for her own gain.

John Profumo, perhaps unsurprisingly, was spared such hatred, and allowed to retreat from public life to work in an East London charity for the remainder of his life.

Both of them would later publish memoirs of their affair and its effects, although Keeler, unable to find work and vilified by the public, tended to offer up scandalous and often unreliable stories in an effort to secure a living.

She had two brief marriages and two children before dying on Dec. 4, 2017, aged 75. But her death didn’t end the strange saga, which looms large in British consciousness even today.

After learning about Christine Keeler and the Profumo Scandal, find out more about Harold Wilson, the surprisingly charismatic leader it brought to power. Then, see how another woman was brought down by a political agenda with the tragic story of Jean Seberg and the FBI’s hunt for her.