The Last American Slave Ship May Have Just Been Found

The discovery could be the long-lost Clotilda, the last known slave ship to bring live slaves to the U.S. 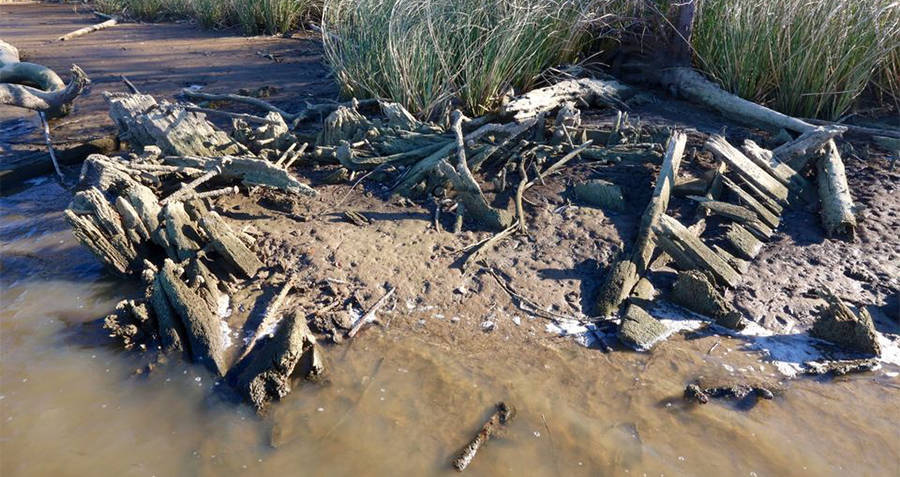 AL.comThe wreckage found by Ben Raines, who claims that it is the long lost Clotilda.

Thanks to a little amateur sleuthing, a local news reporter in Alabama may have uncovered a long-lost part of American history.

Ben Raines, a reporter with AL.com, spent hours listening to accounts from local old-timers and pouring over historical records in an attempt to locate the Clotilda, the last American slave ship known to have brought cargo – that is, living human beings like Cudjo Lewis – back to the U.S.

Ater hours of research, Raines narrowed down an area where the Clotilda was most likely to have come to rest. However, there he was at a dead end, as the area, the Mobile-Tensaw Delta, was entirely underwater.

Then last week, he finally got a break. Thanks to a series of fortunate events (brought on by the same weather system that caused the “Bomb Cyclone” in the northeast) the tide in the Mobile-Tensaw Delta went out. And over the course of a few hours, it continued to go out until the water level was a full two-and-a-half feet below normal.

Taking advantage of the extremely low tied, Raines trekked out to the swampy area and found what he had been looking for – the remains of a ship.

The hull was tipped to the side, almost entirely buried in mud, but the starboard side remained exposed. Immediately, Raines brought in archeologists from the University of West Florida to help him confirm his find.

Their conclusion, though avoiding complete confirmation, did lend evidence to the ship’s authenticity.

All of the archeologists concluded that the ship had been built sometime between 1850 and 1880. The Clotilda was reportedly built in 1855. The construction of the ship was also consistent with slave ships built at the time, which were built wide and shallow, making them better for hauling heavy cargo in shallow water.

Furthermore, the ship’s remains showed signs of being burned, as the slavers of the Clotilda claim they had done to their ship to hide evidence of their human trafficking.

“There is nothing here to say this isn’t the Clotilda and several things that say it might be,” said one of the archeologists on the dig.

“You can definitely say maybe, and maybe even a little bit stronger because the location is right, the construction seems to be right, from the proper time period, it appears to be burnt. So I’d say very compelling, for sure,” said another.

Though, all of the archeologists were quick to point out that thus far the investigation has been strictly visual. No attempts have been made to pull any pieces of the ship out, or investigate its contents. The archeologists say that the only way to make a conclusive determination as to whether or not the ship is the Clotilda is to examine the artifacts in the hold.