Rescuers called off the mission after a day due to its futility. 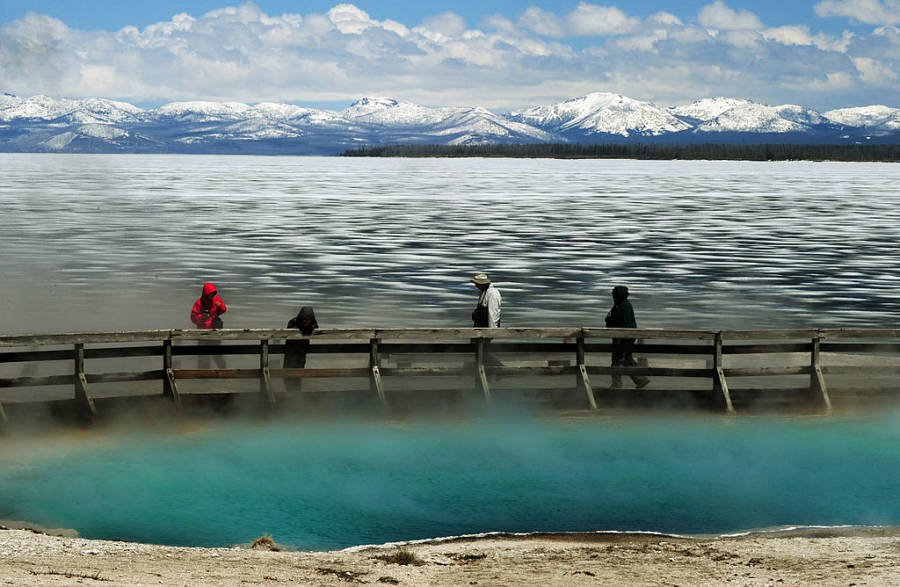 MARK RALSTON/AFP/Getty ImagesTourists walk beside a hot spring and the partially frozen Yellowstone Lake at the West Thumb Geyser Basin in the Yellowstone National Park.

A 23-year-old man by the name of Colin Scott learned that the hard way on Tuesday when he took a tumble headfirst into a scalding hot spring at Yellowstone. His remains — other than a pair of flip-flops — were never found.

His sister, Sable Scott, had been filming Colin as he tripped and fell into the spring. Officials won’t release the footage because of its traumatic nature but said it showed Sable attempting to rescue her brother.

From Oregon, the two siblings were exploring the Norris Geyser Basin, the oldest and hottest thermal area in the park, when they decided to leave the safety of the boardwalk and take their adventure off-road. The pair had been trying to find “a place that they could potentially get into and soak,” according to the Associated Press.

The boardwalk hovers above the crystal-clear pools, letting visitors enjoy the brilliant shades of blue, green, orange and yellow that bubbling from underneath in safety.

The two siblings walked approximately 225 yards away from the boardwalk, according to park officials, and into an isolated area where only a thin layer of dirt separated them from the bath of death churning below their feet.

After Colin fell into the spring, his sister immediately called for help. Due to a lightning storm and despite Colin’s body floating to the top of the pool the day of the accident, search and rescue rangers were unable to recover it — presumably because it dissolved.

Park officials put an end to the recovery mission Wednesday, “due to the extreme nature and futility of it all,” said park spokeswoman Charissa Reid to the Associated Press. The water is simply too acidic, Reid said, leaving “no remains left to recover.”

This marks the first thermal-related death in 16 years in Yellowstone National Park. The park has more than 10,000 thermal features, including geysers, hot springs, mud pots, and steam vents.

Next, look at the stunning yet salty art of Yellowstone National Park, before reading about the baby buffalo park rangers were forced to kill after tourists placed it in their car.