What Happens If The President-Elect Dies?

For better or worse, many have posed the question following Trump's Election Day victory. 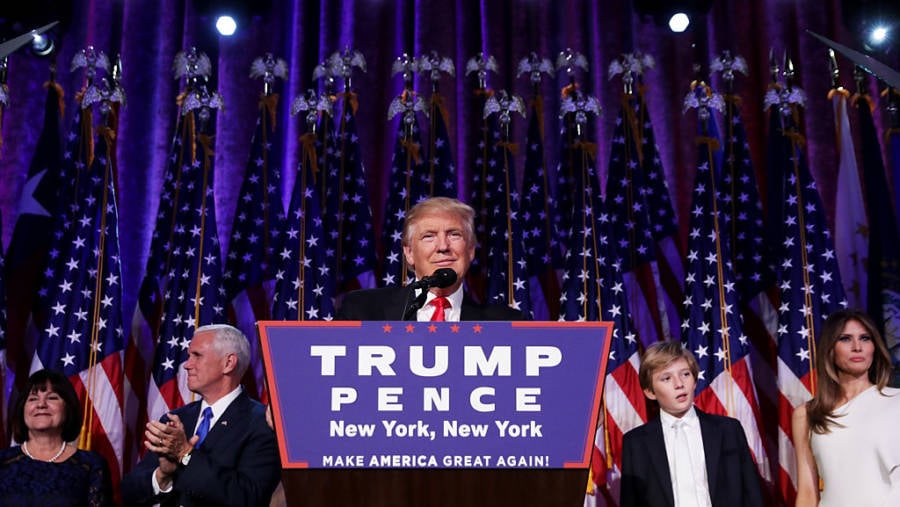 The 2016 election has left the country exhausted, and the presidency is sure to exhaust 70-year-old Donald Trump even more. Born less than a year after World War II ended, Trump is now the oldest person ever elected president.

This has caused many to wonder just what would happen if the president-elect dies between now and the inauguration date of January 20, 2017.

Here’s what we know:

After The Electoral Votes Have Been Cast

First off, it’s important to note that the general election does not literally mark the “end” of a presidential election cycle, but the beginning of a centuries-old procedure in bringing the Electoral College victor into the White House.

After the general election determines which candidates the members of the Electoral College will pledge their votes to, the Electors meet on December 19 to cast their votes. Then, Congress counts these votes on January 6, which actually determines the winner. Finally, on January 20, the presidential inauguration ceremony takes place.

If the president-elect dies after Congress counts the votes and before the inauguration, the 20th Amendment would take care of things. It states that the vice president-elect, i.e. former Indiana Governor Mike Pence, would step into Trump’s shoes and assume the role of president-elect. As for whom Pence would pick as his new veep, both Houses of Congress would have to confirm that after the swearing in ceremony.

However, the 20th Amendment only directly addresses what happens if the president-elect were to die, not if the individual voluntarily withdrew — say, because he or she committed a crime and a court found him or her guilty of it.

Given the lawsuit Trump faces regarding his university, this scenario isn’t entirely out of the realm of possibility. Still, nothing changes in a legal sense if a court convicts a president-elect of a crime, as the Constitution says nothing about a criminal record disqualifying a man or woman from the presidency.

If Trump were to withdraw, experts say it’s likely that he would do so after Inauguration Day on January 20, as Article 2 of the 25th Amendment makes it clear that, at that point, the vice president would simply become president.

Before The Electoral College Has Met

Quite a few states — including Arizona, Arkansas, Georgia, Indiana, Iowa, Kansas, Kentucky, Louisiana, Missouri, North Dakota, Pennsylvania, Tennessee, Texas, Utah and West Virginia — do not have laws binding their electors, which means that in the event that the president-elect dies, those electors could cast their vote for someone else.

As far as the 29 remaining states (plus Washington, D.C.) are concerned, federal law does not dictate that they must continue to cast their vote for the deceased president-elect. Nor does it say that these 29 states must vote for the vice president-elect in the president-elect’s stead. Technically, these electors could vote for whomever they wanted — and that’s where some serious questions arise.

As legal scholar Richard Pildes told The Washington Post, in this circumstance “the issue is how an elector should or can cast their vote. Should the elector vote for the dead winner of the election, if the elector otherwise would be obligated to do so? Should he or she vote for the vice-presidential candidate of that party instead? How would these votes be tallied in Congress?”

If that sounds muddy, that’s because it is — and thankfully, this has only happened once in history before. In 1872, Republican candidate Horace Greeley died after the general election but before the meeting of the electors. The electors slated to vote for Greeley ended up splitting their votes up between four Republican presidential hopefuls and eight vice president candidates. Some even voted for Greeley, despite his condition.

Unfortunately for “Zombie” Greeley, the House passed a resolution that discounted Greeley’s posthumous support. His opponent, Ulysses S. Grant, who had already won the popular vote in a landslide as well, ventured on to the White House.

Bottom line: Trump has won, and the systems we have in place make it such that not even death can change it.

Next, find out whether Abraham Lincoln was the first gay president, before checking these 29 photos showing how cool, handsome, and bad ass some American presidents were as young men.