Geologists say that the enormous fissure will only continue to grow.

A two-mile-long fissure has spontaneously opened up in one of America’s most barren deserts, and geologists say it will more than likely continue to grow.

Situated in Pinal County, Arizona, between Casa Grande and Tucson, the crack was recently revealed in all its enormity by a flyover from an Arizona Geological Survey drone.

The recent footage shows a huge gash splitting the earth, as the people walking alongside its edge look like ants in the face of its breadth.

The crack is shallow in the north while extending down tens of feet into the ground in the south. This disparity is because the northern part of the break is older and partially filled in, according to Joseph Cook, a geologist with the Arizona Geological Survey (AZGS).

“Some areas are about 10 feet [3 meters] across and up to 25-30 feet [7.5 to 9 m] deep (tapering crack, narrowing with depth), while others are a narrow surface crack less than an inch across,” Cook told Live Science. “These narrow sections sometimes have open voids underground, so a collapse of the overlying material is possible — this is how the deep open portions of the fissure formed.” 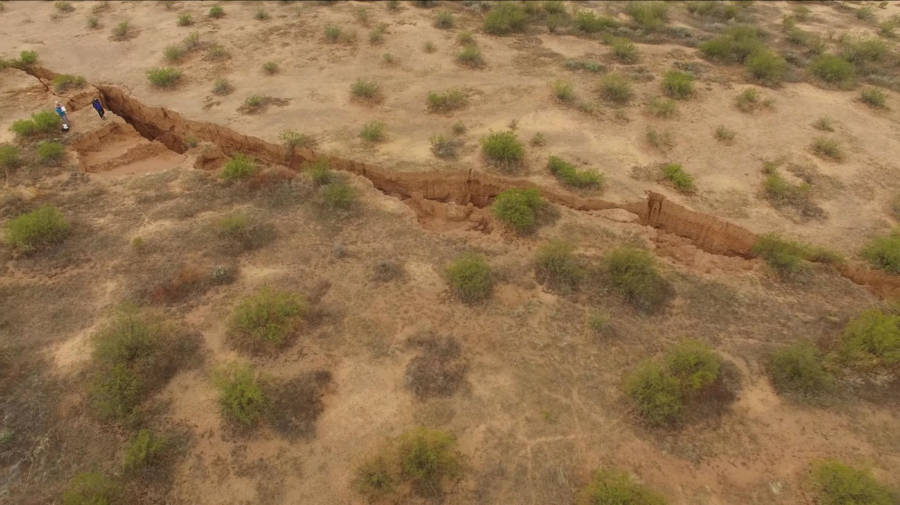 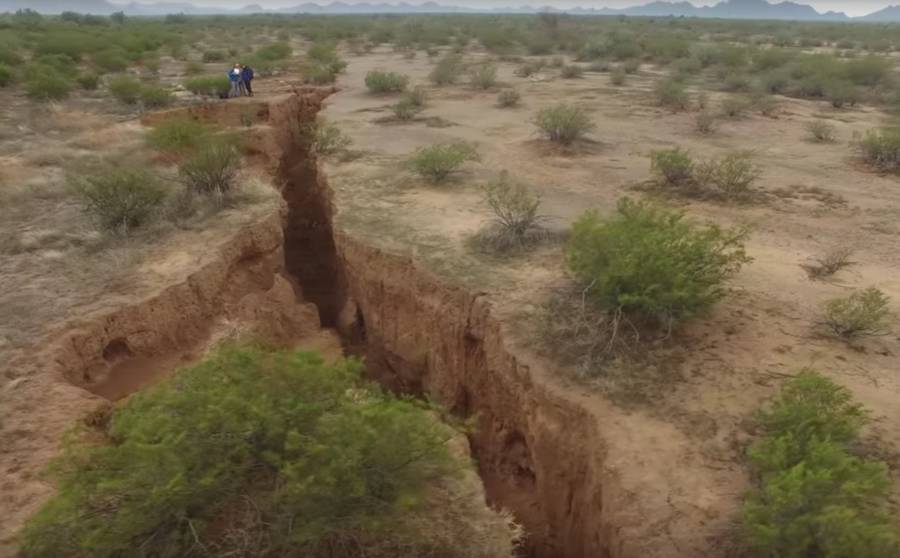 Cook first discovered the fissure when he was playing around on Google Earth in December 2014.

"When I went out to map the fissure, I realized the fissure was much longer than what was apparent in the Google imagery, almost 2 miles [3 kilometers] long in total," Cook said. After mapping the fissure using GPS, the geological team went back for another look using a drone.

According to Cook, agricultural water withdrawal is what is causing the crack to grow. As water leaves the ground, a buried cavity eventually gets filled in with the land above it.

The AZGS is monitoring 26 locations with a total of 170 miles (275 km) of fissures. Cook expects them to keep growing, as the surface cracks are only the tip of the iceberg fissure heading beneath the ground.

"I am sure the length of this fissure will increase over time, we are only seeing the surface crack of what collapsed," Cook said, "the underlying fissure is longer."

Next, read about how an enormous sinkhole swallowed up an entire street in Japan, before checking out these amazing pictures of a sinkhole that ate $5 million worth of classic cars.