The boy smuggling the liquid meth told the agents that it was merely "juice." Soon after they asked him to prove it by taking a drink, he died. 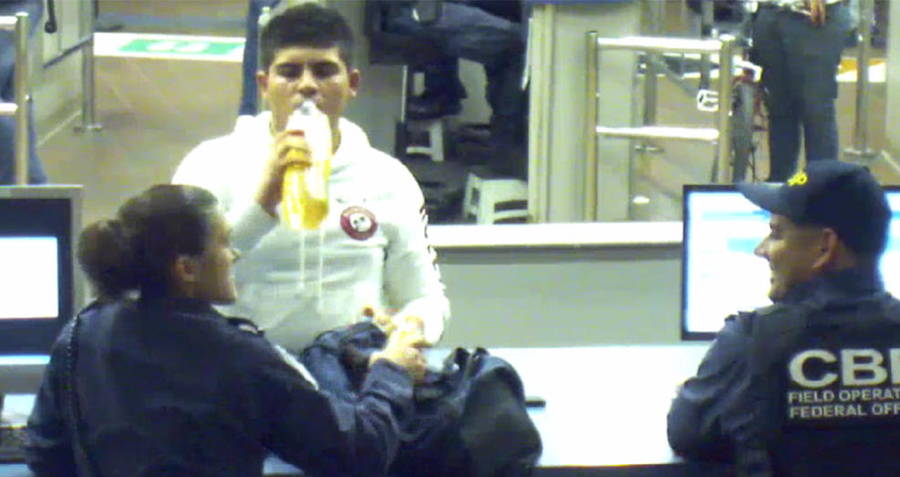 NBCCruz Marcelino Velazquez Acevedo drinks liquid methamphetamine at the San Ysidro Port of Entry from Mexico into the United States on November 18, 2013.

On November 18, 2013, 16-year-old Cruz Marcelino Velazquez Acevedo crossed the border from Tijuana, Mexico into the United States. Then, U.S. Customs and Border Protection officers at the San Ysidro Port of Entry spotted two bottles of amber liquid in Acevedo’s possession.

Acevedo complied and took four sips. Soon he started sweating as his temperature rose to 105 degrees Fahrenheit and his heart rate quickened to 220 beats per minute. He clenched his fists and began screaming “My heart! My heart!”

Tests would soon reveal that the amber substance was liquid methamphetamine, and within two hours of drinking it, Acevedo was dead.

Now, surveillance footage of the incident obtained by ABC News has brought to light all the harrowing details of Acevedo’s demise:

The footage shows one of the officers, Valerie Baird, motioning for Acevedo to drink. Once he does, the other officer involved, Adrian Perallon, makes another gesture urging Acevedo to drink more.

While both of these officers remain on the job today, and neither received any official disciplinary action, some believe that Baird and Perallon are very much at fault.

For one, the officers ignored protocol in asking Acevedo to drink, according to James Tomsheck, a former head of internal affairs at U.S. Customs and Border Protection, in his statements to ABC.

“If they truly suspected there was a controlled substance in the bottle,” Tomsheck said, “they should’ve conducted a field test.”

For his part, Perallon claimed that Acevedo volunteered to drink and the whole ordeal simply went down as an “accident” in the official report.

Despite admitting no wrongdoing, the U.S. government paid Acevedo’s family $1 million in order to settle the lawsuit that they’d filed on the matter.

But now, especially with the surveillance footage in the news, Acevedo’s family and their lawyer in the suit, have continued to express their outrage.

“How can the government allow that? It’s like, OK you can kill someone,” said Reyna Velazquez, Cruz’s sister, to ABC News. “They took him as a fool, as who cares. Well, that fool, he was the greatest person I ever knew.”

As Eugene Iredale, the family’s attorney, told The Washington Post:

He was basically a good boy, he had no record, but he did something stupid. In any event, the worst that would’ve happened to him is that he would’ve been arrested and put in a juvenile facility for some period of time… It wasn’t a death penalty case. To cause him to die in a horrible way that he did is something that is execrable.

Now, lawmakers have joined in as well. As Rep. Zoe Lofgren of California, the ranking member on the House Subcommittee on Immigration and Border Security, told ABC, “Drug smuggling is wrong and is a crime, but this teenage boy did not deserve a death sentence. For CBP officers to inflict a summary death sentence is not only immoral, but also illegal.”

Next, read up on five of the craziest ways that people have been caught smuggling drugs. Then, see the $1 million worth of meth-laced lollipops recently seized by Texas police.