We always knew spinach was healthy, but this discovery takes "super food" to a whole new level. 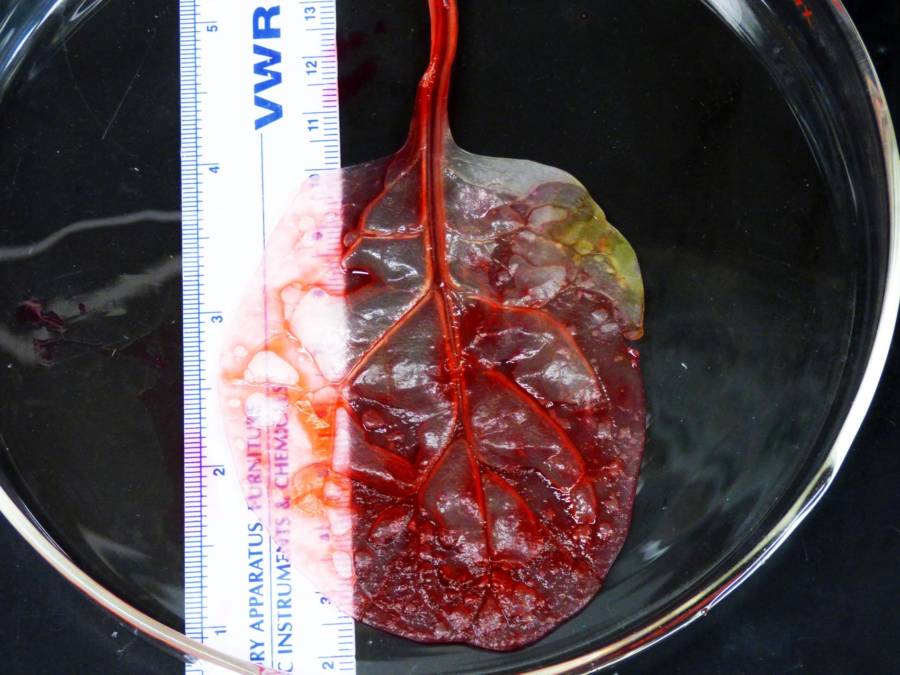 If you look closely at the small veins stretching out from the stem of any spinach leaf in your salad, you’ll notice that they’re small and delicate — not unlike those that pump blood through our hearts.

Scientists from the Worcester Polytechnic Institute in Massachusetts have now used these similarities in an effort to overcome one of the main barriers to creating large-scale human tissue.

“The main limiting factor for tissue engineering…is the lack of a vascular network,” Joshua Gershlak, a co-author of a study published in March in the Biomaterials journal, told National Geographic. “Without that vascular network, you get a lot of tissue death.”

Most everyday plants have that fragile network already built in, which made Gershlak and his team wonder if scientists really have to start from scratch at all.

To find out, they removed all of the plant cells from a spinach leaf — leaving behind a frame of cellulose, a biocompatible substance that’s already used to heal wounds and generate cartilage.

They then took that frame of veins — used by the plants to deliver water and nutrients to their cells — and bathed it in living human cells.

The cells latched on to the spinach frame and grew into something resembling a chunk of human heart.

To test their theory, researchers then pumped a red, blood-like fluid and microbeads through the veins.

“We have a lot more work to do, but so far this is very promising,” Glenn Gaudette, another study author, said in a press release. “Adapting abundant plants that farmers have been cultivating for thousands of years for use in tissue engineering could solve a host of problems limiting the field.”

The next step is to figure out a way to replace damaged tissue in heart attack patients with these plant-based structures. The spinach-y veins in the tissue implant will hopefully deliver oxygen to the replacement tissue (which can be generated using a 3D printer) so that new heart matter can form.

The same technique might also apply to other plants. Wood, for example, could maybe be used to fix broken bones.

“To be able to just take something as simple as a spinach leaf and actually turn that into a tissue that has the potential for blood to flow through it is very, very exciting,” Gaudette said. “We hope it’s going to be a significant advancement in the field.”

Next, read about how “mass-produced” blood could be a new thing. Then, see how 3D bioprinters have made human skin “printable.”