A 2008 study led by the Smithsonian Institute found that likely all the 13 life-size quartz crystal skulls are likely fakes. 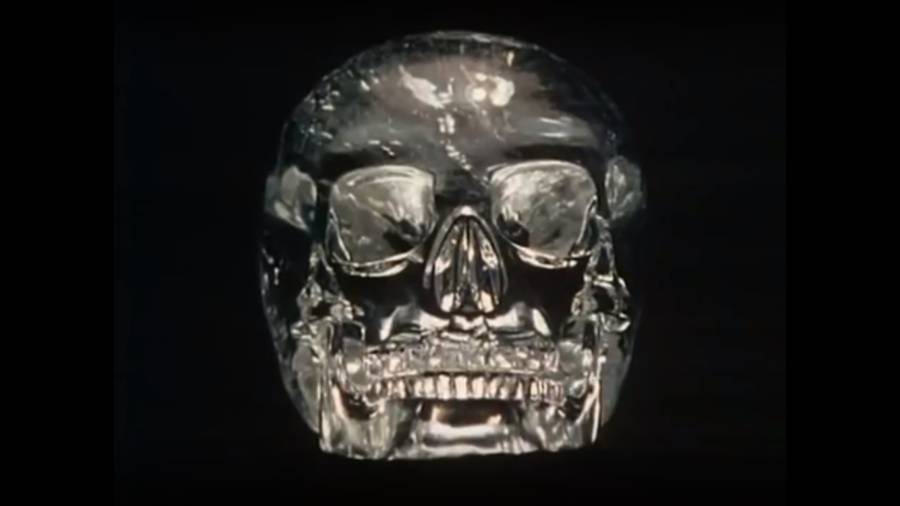 YoutubeThe legend of the crystal skulls started with the 1924 Mitchell-Hedges Skull, a.k.a. the “Skull of Doom.”

In 1924, British adventurer Frederick Mitchell-Hedges led an expedition to Lubaantun, an ancient Mayan city deep within the Yucatan jungle in modern-day Belize. There inside a Mayan pyramid, his adopted daughter, Anna, found one of the most mysterious objects in archaeology: a crystal skull fashioned out of a single solid piece of clear quartz.

Since the discovery of the Mitchell-Hedges skull, as it is called, an origin story of supernatural powers and legendary civilizations has developed. But can any of these legends be trusted?

Frederick Mitchell-Hedges, who was known to embellish his adventures, wrote of the skull in his 1954 memoir Danger My Ally and claimed it was a relic of the Mayans. He dubbed it the “skull of doom” and that “several people who have cynically laughed at it have died, others have been stricken and become seriously ill.” Finally, he cryptically added: “how it came into my possession I have reason for not revealing.”

After his death, Anna Mitchell-Hedges spent decades spreading the skull’s mythos globally on international tours and through appearances on television shows such as Arthur C. Clarke’s Mysterious World. To an audience, she reported that the Mayans told her that the skull was used to “will death.”

Other so-called magical crystal skulls from private collections came out of the woodwork with exotic sounding names such as Sha Na Ra, and Amar, the name of a “Tibetan” crystal skull. Another was simply called Max the crystal skull.

These crystal skulls became part of a larger, allegedly Native American, prophecy which claimed that when 13 of them were finally reunited, the skulls would disseminate universal knowledge and secrets critical to humanity’s survival. But only when humanity was ready.

The presence of similar skulls in the collections of the Musee du Quai Branly in Paris and the British Museum in London seemed only to legitimize these fanciful stories. However, while anthropologists and scientists from both these prestigious museums dismissed the possibility of the crystal skulls originating from Atlantis or outer space, many were curious about the true origins and purpose of these exotic, and macabre objects.

Where Are They Really From? 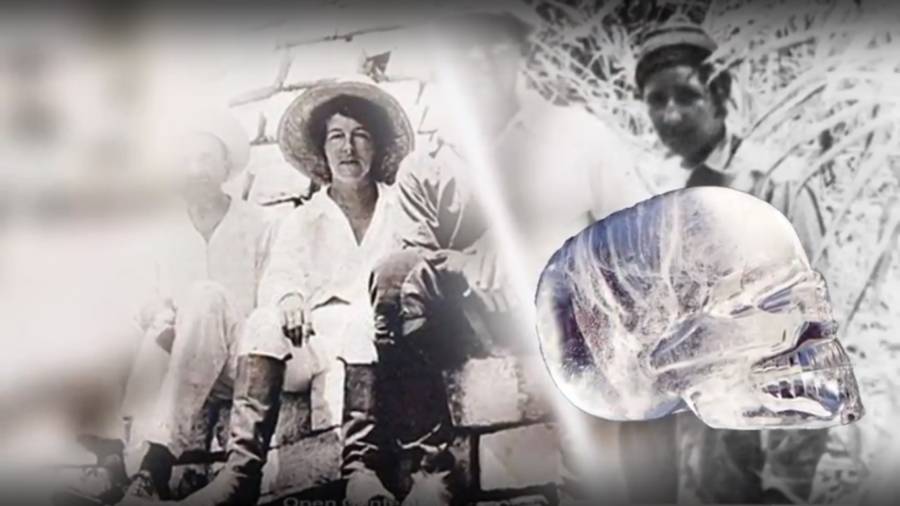 YoutubeAnna Mitchell-Hedges toured worldwide with the “Skull of Doom” and gave lectures on its purported psychic powers and mythic past.

Both museums had displayed their crystal skulls as Mesoamerican Aztec artifacts for over 100 years, though their authenticity was questioned long before the 20th century even begun. Still, it wasn’t until a milky-white rock crystal skull was delivered anonymously to the Smithsonian Institute in Washington D.C. in 1992 that the mystery of the crystal skulls’ origins would finally be unraveled.

The only evidence that accompanied it was an unsigned note which read: “This Aztec skull…was purchased in Mexico in 1960…” With Mexico as the only lead, researching the skull fell to Jane McLaren Walsh, an expert in Mexican archaeology at the Smithsonian. With little information to go on, Walsh compared the skulls from other museums, researched museum archives and employed scientific research to find answers. Eventually, her quest would lead to the Mitchell-Hedges skull.

One of the first things Walsh noticed was the stylistic differences between the crystal skulls and those depicted in Mesoamerican art. Skulls were a recurring motif in pre-Colombian iconography, but Mesoamerican skulls were almost always carved out of basalt and were crudely carved. In addition, quartz was rarely used in pre-Colombian artifacts, and no crystal skulls had ever been found in any documented archaeological excavation.

With the design of the crystal skulls remaining an enigma, Walsh turned her attention to the skull’s documented record of ownership. She traced both the British and Paris skulls to a 19th-century amateur archaeologist and French antiquities dealer named Eugene Boban. Boban, who specialized in Aztec artifacts, frequently traveled to Mexico to purchase antiquities and take them back to Paris to sell in his shop.

Boban had a record of selling fakes, but neither museum had bought the skulls directly from him. Boban had originally sold the skull to Alphonse Pinart, an explorer, who it seems off-loaded the skull to another museum in 1878 after the Exposition Universelle noted that “the [skull’s] authenticity appears doubtful.”

20 years later, in 1898, the British Museum bought their skull from Tiffany and Co. The jewelry store had bought the skull directly from Boban sometime after he left Mexico for New York. Boban had left Mexico in a hurry after trying to sell the same crystal skull to the National Museum of Mexico under the false claim that it was an Aztec artifact unearthed in a Mexican archaeological site.

Do Crystal Skulls Have Powers? 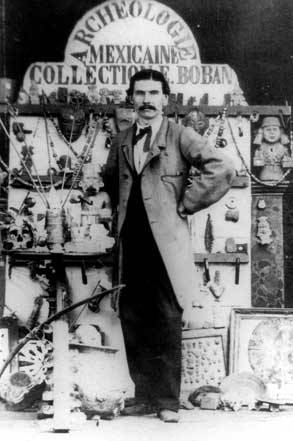 With the crystal skulls’ pre-Colombian origin in doubt, Walsh turned to science to determine when and where they were made. Under a collaborative programme set up in 1996 between the Smithsonian and British museums, Walsh received help from Margaret Sax, a conservation scientist from the British Museum.

The scientific studies focused exclusively on the skulls in their museums. Radiocarbon dating, one of the most common tests used to determine the age of an object, was ruled out because it cannot date quartz. Instead, other forms of analysis were used to determine the biography of the British and Smithsonian skulls.

Using light and scanning electron microscopy (SEM), Walsh and Sax compared the surfaces of the skulls with the surface of a genuine Mesoamerican crystal goblet, which is one of the few pre-Colombian crystal objects.

Next, raman spectroscopic analysis was used to determine the origin of the crystal. Crystal has specific impurities consistent with where they’re from. The impurities on the skull in the British Museum revealed that the quartz originated from Brazil or Madagascar and not Mexico.

In the late 19th century, Madagascar and Brazil exported rock crystal to France at the same time Boban was selling antiquities and fakes. Later, an independent test concluded that the crystal used for the Paris skull also came from either Brazil or Madagascar.

However, the Smithsonian skull yielded a different result entirely. Using X-Ray Diffraction Analysis, Sax discovered minute particles of silicate carbide, a sludgy substance used to coat a rotary wheel to give an object a smooth finish. But this substance only came into use during the 1950s, thus making the Smithsonian skull’s construction far more recent.

The results proved conclusively that all three skulls were too modern to be Mayan or Aztec, let alone from Atlantis. Now, only one skull remained – the Mitchell-Hedges skull.

The Mitchell-Hedges Skull In The Final Analysis

In her research, Walsh found irrefutable proof the Mitchell-Hedges skull was just as unremarkable as the other crystal skulls. In an article from the July 1936 edition of the British journal Man, a photograph quite clearly shows the same skull owned by Mitchell-Hedges except that it is referred to as the Burney skull.

It appears that in 1936, nine to 12 years after the Mitchell-Hedges family claimed to have discovered the crystal skull, a London art dealer named Sydney Burney owned it. Further research showed that Burney sold his crystal skull to Frederick Mitchell-Hedges in an auction at Sotheby’s. With no record of the skull found before 1934, it appears the supposed discovery at Lubaantun was a fraud.

That same year, Indiana Jones and The Kingdom of the Crystal Skull hit the theaters and features the title adventurer searching for an ancient artifact in Peru. The film naturally sparked further interest in the mythos of the crystal skull.

However, many still refuse to acknowledge that the skulls are without ancient origins. According to books written by alternative theorists, Sha Na Ra, and Max the crystal skull were both tested at the British Museum as well. It is alleged that Walsh was asked for the results of the scientific tests on Sha Na Ra and Max, and responded with “no comment.”

After this crash course in the origins of crystal skulls, check out these creepy legends with true origins. Then, read about La Noche Triste, when the Aztecs almost thwarted a Spanish takeover.