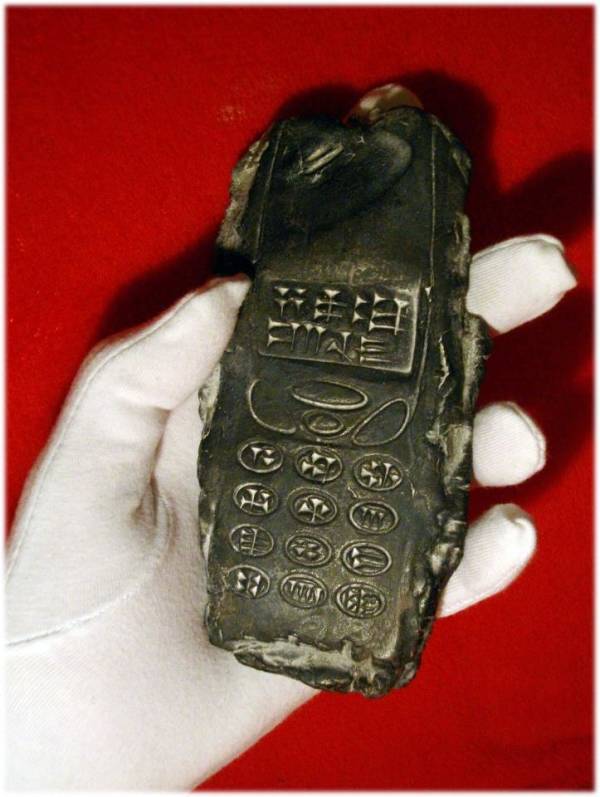 A few months ago, this sculpture, resembling an ancient cell phone with cuneiform lettering, set off a wave of theorizing across the Internet. Image Source: Art Replik / Facebook

Last December, the Internet was abuzz with a story claiming that archaeologists in Austria had unearthed what looked like an 800-year-old cell phone with cuneiform script on its “buttons.” As you’d guess, amateur conspiracy theorists from around the web — not to mention a bevy of at least moderately respectable news sites — ran with the story.

Many immediately smelled a hoax, but the shelf life on a story like this is short, so, by the time the truth — as puzzling in its own way as the hoax — was uncovered, we’d all moved on.

Two weeks after the original post was published (an eternity for a story like this), the truth emerged: the object in question was actually a clay sculpture made by German artist Karl Weingärtner all the way back in the deep, distant past of…2012.

Of course, Weingärtner hasn’t shied away from it, either. Literally every single public posting on his Facebook page since the hoax began has referenced the cuneiform cell phone in one way or another. It’s tough to blame him for benefitting — Karl Weingärtner didn’t invent the hoax industry.

And make no mistake, an industry is what it is.

CNN dubbed 2013 “the Web’s year of the hoax,” citing the extraordinary preponderance of not just popular hoaxes, but popular hoaxes that crossed thoroughly into the mainstream. The following year, The Washington Post proclaimed 2014 the year of the “fake news industry,” “a cynical (and profitable!) enterprise that churns out convincing hoax-news for clicks.”

If so many of us are aware that a) hoaxes are everywhere, and b) there’s an industry devoted to churning them out, then why do we keep falling for them?

As CNN said, some hoaxes are just too good to be true: “Some of us are so enamored of what the tale says about our world that we miss the warning signs.”

However, something else from CNN’s report runs even deeper and rings even truer: “As savvy as you’d think we’d be a decade after deposed Nigerian princes began e-mailing us with the promise of vast riches, 2013 has turned out to be the Year of the Online Hoax.”

Maybe that, right there, is the problem — after being so bombarded with hoaxes year after year, we’ve come to think that it’s made us savvy. The issue is not that we’re oblivious of the hoax industry — it’s that we’re convinced its existence has so finely tuned our bullshit detectors that we can never fall for it. Clearly, that’s not the case.

While we think we’ve been honing our hoax detection skills, of course, the hoax industry has been honing its hoax creation skills, integrating itself further into the increasingly hollow notion of reputable news media, and making big money all the while.

Next, discover some of history’s best hoaxes and check out some of the truly greatest mysteries of ancient history.