"We knew how important the violin is to Dagmar, so it was vital that we preserved function in the delicate areas of her brain that allowed her to play." 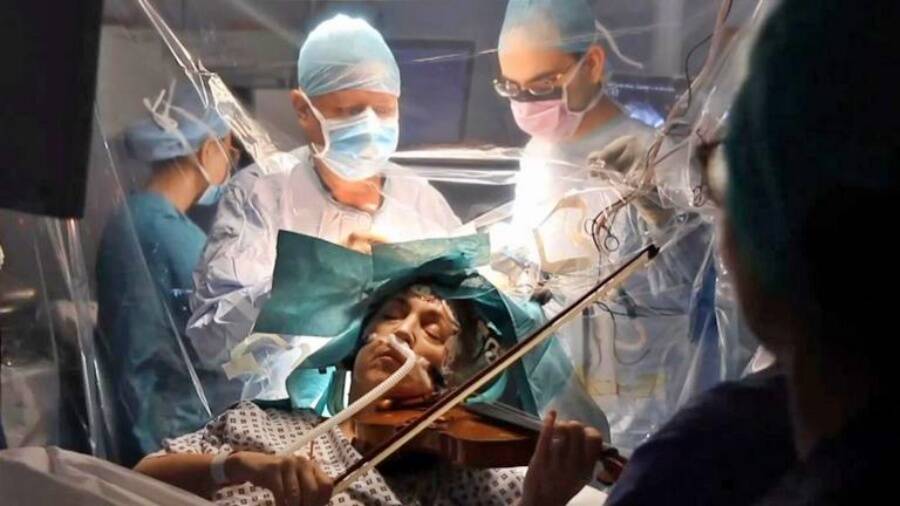 When doctors first told musician Dagmar Turner that she needed surgery to remove the tumor in her brain, the first thing she thought of was whether she would still be able to play her violin. Turner, 53, was terrified she might lose her musical ability if something were to go wrong during the procedure.

But her operation went well. Now, Turner is making headlines after footage of her peacefully playing her violin while under the knife has circulated on the internet.

According to the Associated Press, before the procedure neurosurgeon Keyoumars Ashkan and his team made an effort to map out the different parts of Turner’s brain. The tumor they needed to operate on was located in the right frontal lobe which is in close proximity to an area that controls the movements of the left hand.

It was indeed a risky surgery, especially for a practicing musician like Turner, who has been playing the violin since she was 10. The team spent two hours mapping out the parts of her brain that were active when she played and — using their mapping as a guide — were able to take extra caution to avoid the vulnerable areas of her brain.

“We knew how important the violin is to Dagmar, so it was vital that we preserved function in the delicate areas of her brain that allowed her to play,” Ashkan said. “We managed to remove over 90 percent of the tumor, including all the areas suspicious of aggressive activity, while retaining full function in her left hand.”

Violinist Dagmar Turner played some music tunes while doctors operated on her brain.

In the middle of Turner’s big brain surgery, the neurosurgeon asked the life-long violinist to play her music. It was to “ensure the surgeons did not damage any crucial areas of the brain that controlled Dagmar’s delicate hand movements,” read a statement released by the King’s College Hospital in London where Turner’s procedure was performed.

In the video of Turner’s surgery room music performance, the violinist — donning patient scrubs and medical sheets wrapped around her head as the doctors worked on her open brain — is seen with both eyes closed. Yet, her arms move gracefully as she plays her violin.

Some of the doctors and nurses in the room listened to the tune coming out of her violin and gave words of encouragement while Turner continued to play without any issues.

At one point, Ashkan can be heard saying, “Amazing, carry on, darling,” as he worked to remove the tumor from her brain.

Turner was first diagnosed with a brain tumor in 2013 after she had suffered a seizure during a symphony performance.

Since her scary operation was successfully completed, Turner, who is a musician with the Isle of Wight Symphony Orchestra, has recovered well. She left the hospital three days after and is eager to return to her orchestra.

“The thought of losing my ability to play was heart-breaking but, being a musician himself, Prof. Ashkan understood my concerns,” Turner said. “He and the team at King’s went out of their way to plan the operation – from mapping my brain to planning the position I needed to be in to play.” 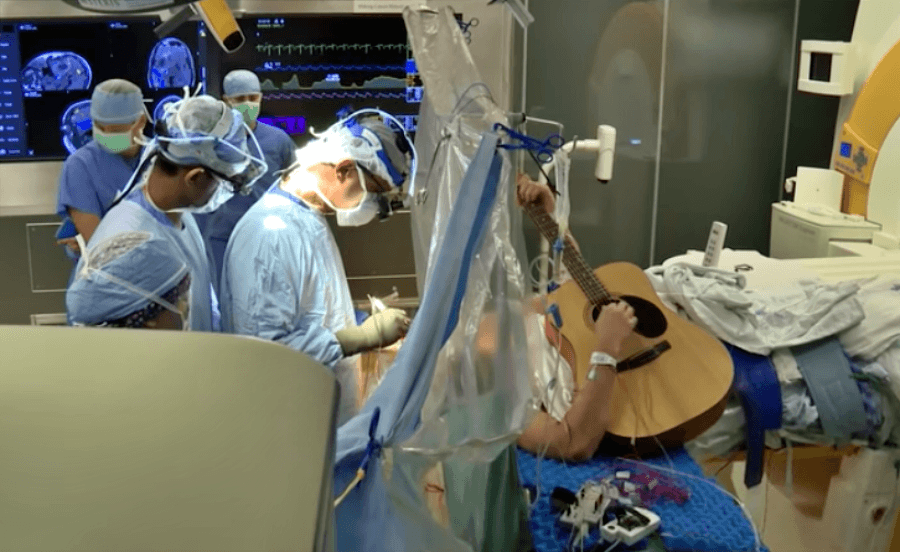 MD Anderson Cancer Center/YouTubeIn 2018, Robert Alvarez was awaken so that he could test playing his guitar while undergoing brain tumor removal surgery.

There are an estimated 400 brain tumor removal surgeries performed by doctors at the hospital every year.

During such surgeries, patients are often woken up so doctors can make sure their speech hasn’t been affected by having them do a quick language test while in surgery. The procedure is known as an awake craniotomy. But having a musical patient play their instrument as a test was a first for the hospital.

“This was the first time I’ve had a patient play an instrument,” Ashkan said.

These types of motor function tests are becoming increasingly common in the surgery room.

In 2018, Robert Alvarez was captured on the surgical table playing his guitar. He played the song “Creep” by Radiohead as the surgeons at the MD Anderson Cancer Center at the University of Texas removed his brain tumor. They successfully removed 90 percent of his brain tumor which Alvarez followed up with radiation therapy.

“I could see that he wanted to preserve that function… especially his ability to sing, recall his memory, his motor functions or dexterity, which is critical,” Sujit Prabhu, the neurosurgeon who led Alvarez’s tumor operation, explained. “We are really on the path where we’re going to personalize the type of testing we do in the operating room.”

Next, learn how scientists connected three separate brains together and they successfully shared their thoughts with each other, and read about the surgery of a man born without testicles who received an implant from his twin so he could have biological children.