Atlas Obscura on the Gilbert U-238 Atomic Energy Lab.

Baby Boomers who came of age during the Cold War often played with toys with a science theme. Shockingly, the atomic age would see consumer products containing actual uranium.

The boring chemistry sets of yesteryear got a little edgier in 1950, with the introduction of the Gilbert U-238 Atomic Energy Lab for children. For one brief year, this “toy” was gifted to kids. The problem? It came with four types of uranium ore — which can be more dangerous than a choking hazard.

Produced by the A.C. Gilbert Company and developed by Dr. Grace Langdon, the set sold for around $50 and seemed like an educational toy that would spark a love of science. However, it was rightfully yanked from the shelves by 1952. 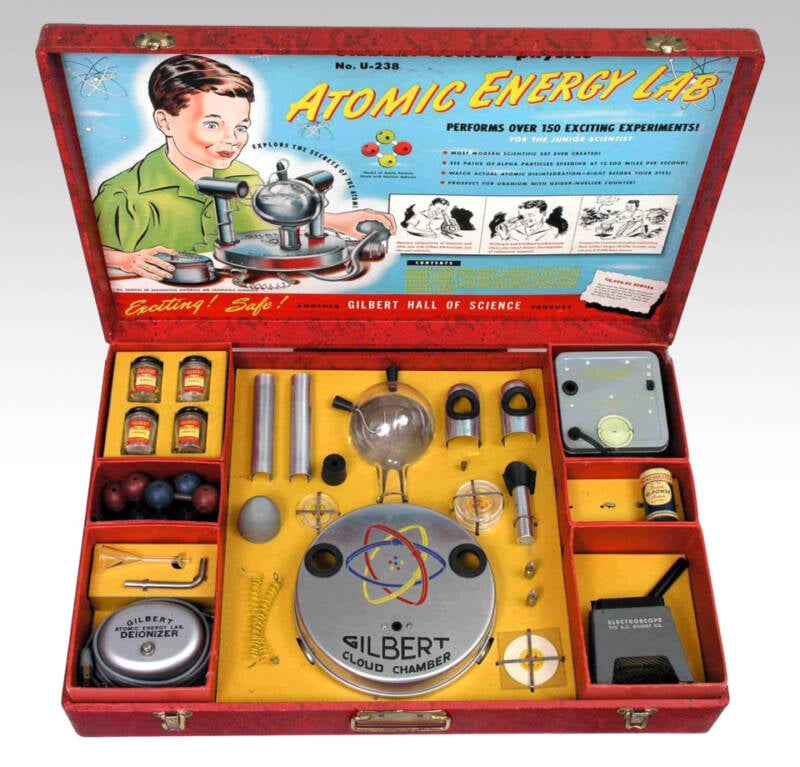 Alongside the uranium, the set came with a beta-alpha source, a pure beta source, a gamma source, a spinthariscope, a cloud chamber with its own alpha source, an electroscope, a Geiger counter, a manual, and a comic book.

While the comic “Dagwood Splits the Atom” told a neat little story of discovering nuclear fission with cameos from Popeye and Blondie, the “Prospecting for Uranium” manual encouraged kids to contribute to America’s scientific prowess. Critics soon expressed their shock. But Dr. Langdon was defensive.

“It stresses the peace-time role of atomic energy,” she said. “Not a hint of the A-bomb in the whole kit.”

It’s unclear if parents were reassured to hear that this toy was incapable of producing mushroom clouds. However, the included Geiger counter — an instrument which detects and measures radiation — may have pleased any families constructing a bomb shelter in their basement. 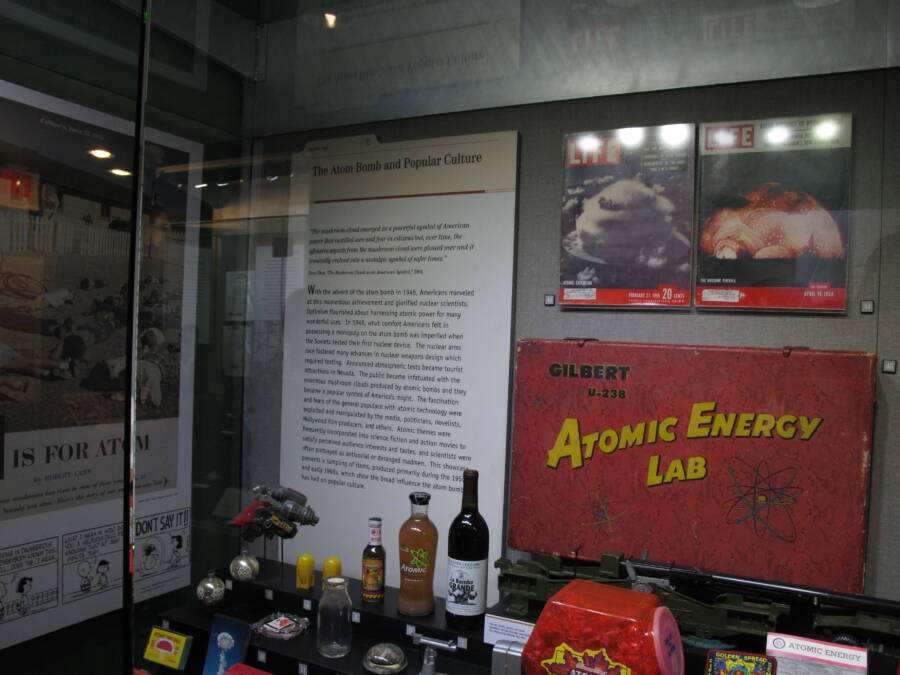 The very first editions of the Gilbert U-238 Atomic Energy Lab kit remain the rarest. Produced in 1950, they came in a tan case and were supplanted by an updated variety in a red case the following year. The contents were largely the same — including the assortment of uranium.

Ultimately, health and safety concerns led the A.C. Gilbert Company to remove the U-238 Atomic Energy Lab set from its Gilbert Toys American Flyer Trains catalog in 1952. The No. 11 Gilbert Chemistry Atomic Energy Lab set was sold in its stead, though advertisements for the former remained in print until 1953.

Furthermore, the dangerous toy’s replacement wasn’t that much better — it still contained uranium ore samples to play with, albeit in smaller quantities.

These vintage toys are now coveted collector’s items that go for as much as $5,000 online.