Not only is it 30 times larger than other isopod species, but it's also the first new giant isopod species found in over a decade. 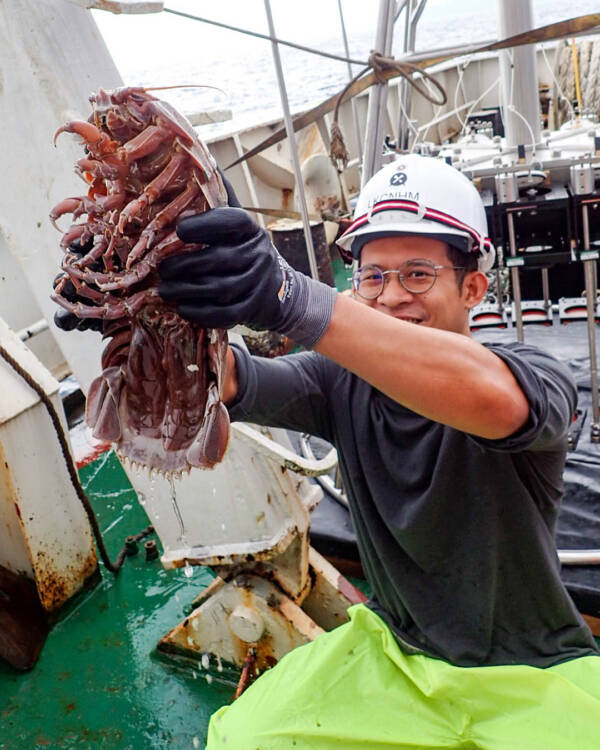 LKCNHM/InstagramThe Bathynomus raksasa is the largest known giant isopod species in the world.

If you happen to be a fan of the popular video game Animal Crossing, then you’ll know that giant isopods are alien-like deep-sea crustaceans that resemble large underwater cockroaches. But there are also “supergiant” isopods, which can grow up to 20 inches — and a team of biologists have recently identified what they believe to be the largest known species of supergiant isopods in the world.

Reaching a formidable 13 inches in length on average, this isopod is the first new giant isopod species to be described by scientists in more than a decade. Researchers have fittingly nicknamed this eerie beast the “Darth Vader Isopod,” in reference to its spacesuit-like appearance which vaguely resembles the Star Wars villain. 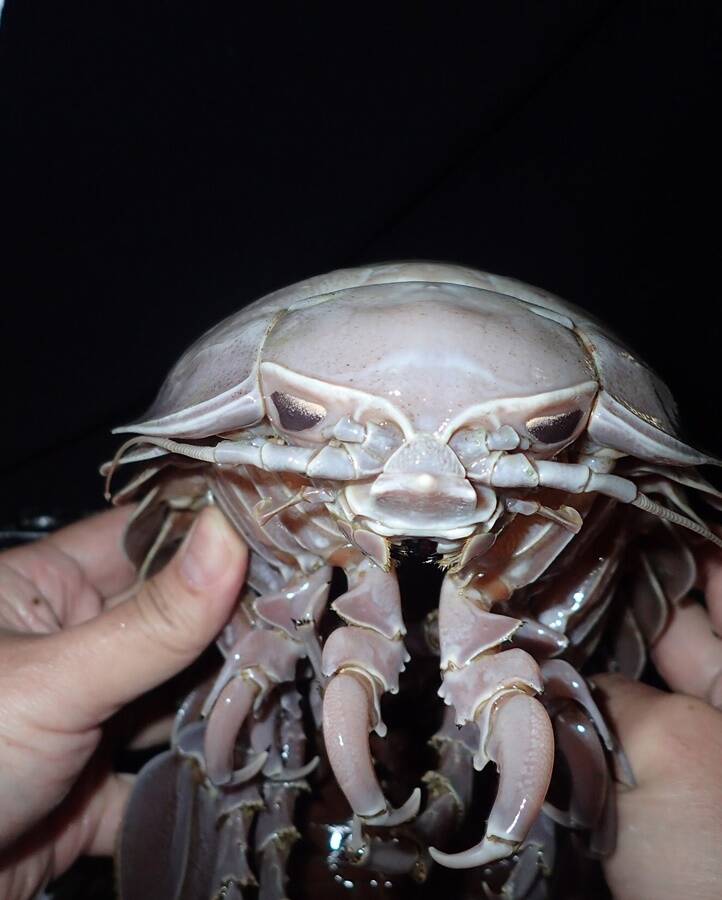 LKCNHM/InstagramThe supergiant “raksasa” isopod has been officially classified as a species of supergiant isopod all its own. Specimens in this species can grow up to 20 inches long.

The new species was formally named Bathynomus raksasa, which comes from the Indonesian word “rakasa” or “giant.” According to Live Science, researchers first captured the new species from the depths of the Indian Ocean off the coast of Southern Java in Indonesia back in 2018.

Photos of the supergiant isopod were first shared on social media by the Lee Kong Chian Natural History Museum (LKCNHM), which was involved in the research expedition that found the new species. In one photo, the museum’s Collections Specialist Muhammad Dzaki Bin Safaruan is seen holding one of the specimens while onboard the Indonesian research vessel Baruna Jaya VIII.

“One of the animals that we hoped to find was a deep-sea cockroach affectionately known as Darth Vader Isopod,” the museum captioned their post. “The staff on our expedition team could not contain their excitement when they finally saw one.”

There are about 10,000 species of isopods that live along the ocean floor and they can be as small as a few millimeters long. Giant isopods can measure up to roughly between seven-and-a-half and 14.2 inches long. B. rakasa is by far the largest species of isopod researchers have yet found.

According to a new study published in the journal ZooKeys, researchers were able to classify B. rakasa as a unique species of isopod due to its head shape and the features of its shield, abdominal segments, and spine. 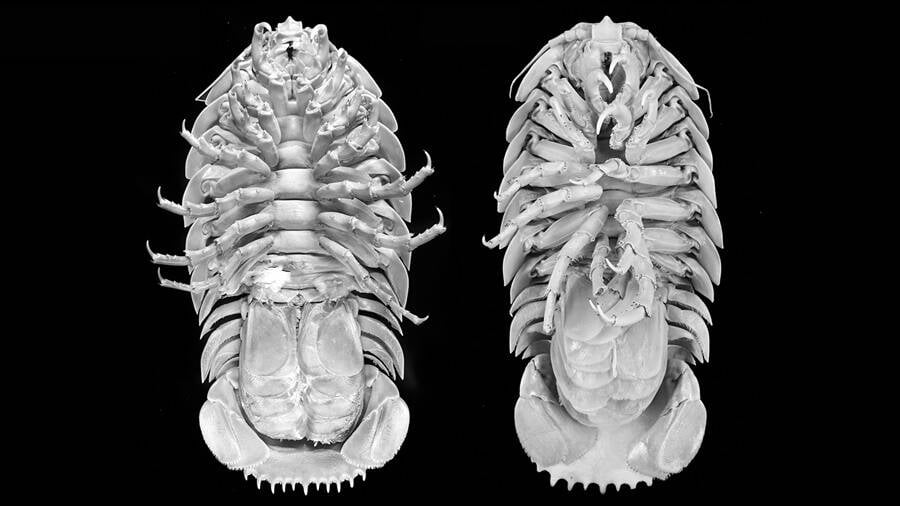 Size aside, all isopods share some of the same features including four sets of jaws, two sets of antennae, and a segmented body cut in seven sections. They are related to shrimp, crabs, and land-dwelling isopods like pillbugs and wood lice.

The two Darth Vader isopods used in this latest study, one male and one female, were collected off the southern coast of Java on an expedition that included scientists from the LKCNHM, the Tropical Marine Science Institute (TMSI) in Singapore, and the Institute of Sciences (LIPI) in Indonesia.

The team was led by Conni Sidabalok of the Research Center for Biology of LIPI and they recovered the two isopods from a depth of between 3,000 and and 4,100 feet. Other studies have found giant isopods at even greater depths of up to 8,500 feet, however. 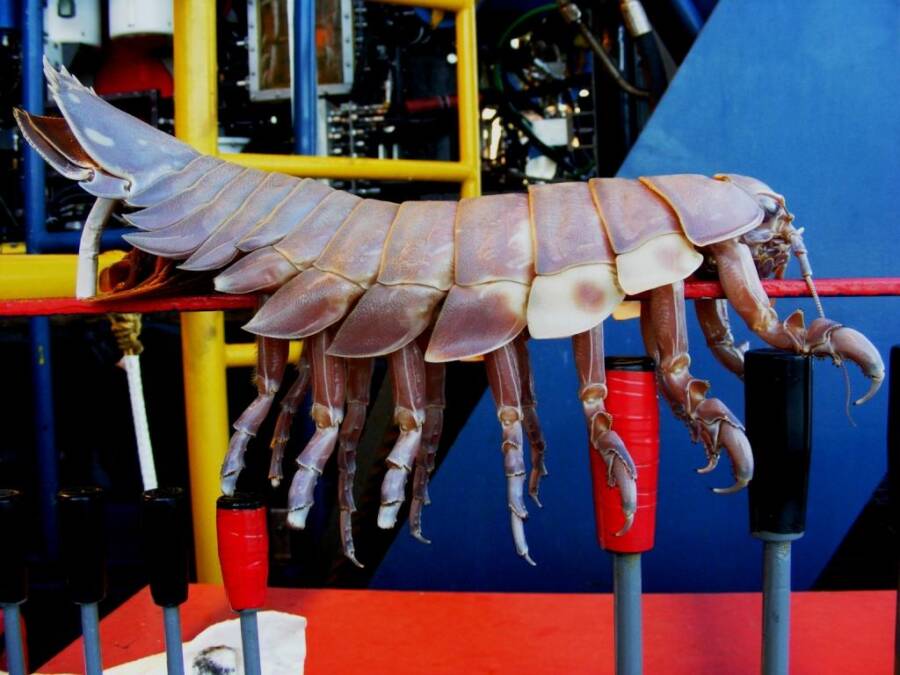 Deep Sea NewsOne of the largest supergiant isopods captured on record before the Darth Vader isopod was this two-and-a-half-foot-long behemoth from the Gulf of Mexico.

The discovery is also the first instance of a supergiant isopod species to have been found in Indonesia. So far, supergiant isopods have been retrieved in other parts of the globe including the Gulf of Mexico, the Coral Sea, and the South China Sea.

The Darth Vader supergiant isopod is a great example of the biodiversity long-known to exist in our oceans. It’s also a testament to just how much of our vast world is still left to be discovered.

“The identification of this new species is an indication of just how little we know about the oceans,” confirmed Helen Wong, a researcher with St. John’s Island National Marine Laboratory which is part of TMSI. “There is certainly more for us to explore in terms of biodiversity in the deep sea of our region.”

Next, read about this faceless fish that was caught in Australia for the first time in 140 years. Then, check out some of the world’s ugliest animals.