Magic tricks have long maintained their popularity because they offer observers a chance to escape from reality. But as the following stories show, sometimes the only “escape” that awaits those performing the tricks is death.

Balabrega And The Dancing Moths 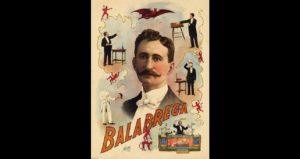 At the height of Vaudeville’s popularity in the early 1900s, Swedish magician Balabrega took his signature act on tour in Brazil. The captivating and elaborate trick involved six assistants dressed as moths, all of whom appeared to dance as flames engulfed them. Balabrega was so fascinated with the illusion he purchased the rights to it – effectively claiming it as his own.

The trick’s complexity would ultimately result in Balabrega’s death. One venue couldn’t accommodate the kind of gas Balabrega needed for the flames, and so the magician opted to use acetylene instead. The acetylene immediately ignited, and the magician and a nearby assistant were blown to bits in the resulting fireball. 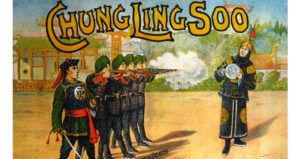 Magician Chung Ling Soo was actually a white man from Brooklyn. After finding only moderate success with his original act, William Ellsworth Robinson decided to cash in on the “yellowface” trend of the late 1800s — even going so far as to use the name of a popular and still working Chinese magician to bolster his appeal.

For a time it worked, and Ellsworth made his rounds doing the infamous bullet catch trick, which was originally performed in the 1580s. In this illusion, an audience member helps load a gun with a marked bullet; the gun is shot, and the magician acts stunned until ultimately emerging with the bullet in hand or teeth.

Illusionists have been known to use blanks, wax bullets, or even electric guns to pull off the act. For it to work, however, one has to not get shot with an actual bullet — and eventually that’s where Ellsworth messed up.

Over time Ellsworth got lazy, and gunpowder accumulated in the chamber of his seldom-cleaned gun. In a haphazard effort to save money, Ellsworth also neglected to shoot off an original and very real bullet, leaving it locked in the chamber. The trick went off as usual until the live bullet lodged itself directly into Ellsworth’s lung. His last words are said to be, “Something went wrong. Quick! Pull the curtain!”