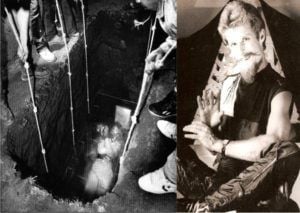 http://www.anehdidunia.com/Joseph Burrus seen being lowered to an early grave (left) and his headshot (right)

Joeseph W. Burrus’ idol worship would eventually kill him. Better known as Amazing Joe, the magician sought to emulate his hero, Harry Houdini, and on Halloween 1990 scheduled his largest spectacle yet. A chained-upBurrus was lowered seven feet into the ground as a cement truck unloaded its contents onto the see-through casket in which he was trapped. Onlookers at Blackbeard’s Family Fun Center in Fresno, Ca., eagerly awaited an emergence that would never come. The cement had crushed the coffin, suffocating Amazing Joe in the process.

Charles Rowan And The Speeding Car

In 1930, Charles Rowan was preparing for his signature stunt the way he always did: writing a letter of exoneration for his assistant in case of accidental death. This time, however, the assistant would need it.

In the trick, Rowan would attempt to escape from a straitjacket while a car barreled toward him at 45 miles per hour. The pure physics of the act meant that only one mishap or wasted second would result in instant death. When Rowan finally did slip up, the car ran right over him, severing his leg and ending his life in front of the mortified audience. The letter of exoneration proved little comfort for the driver, who had to live with the tragedy for the rest of his life.