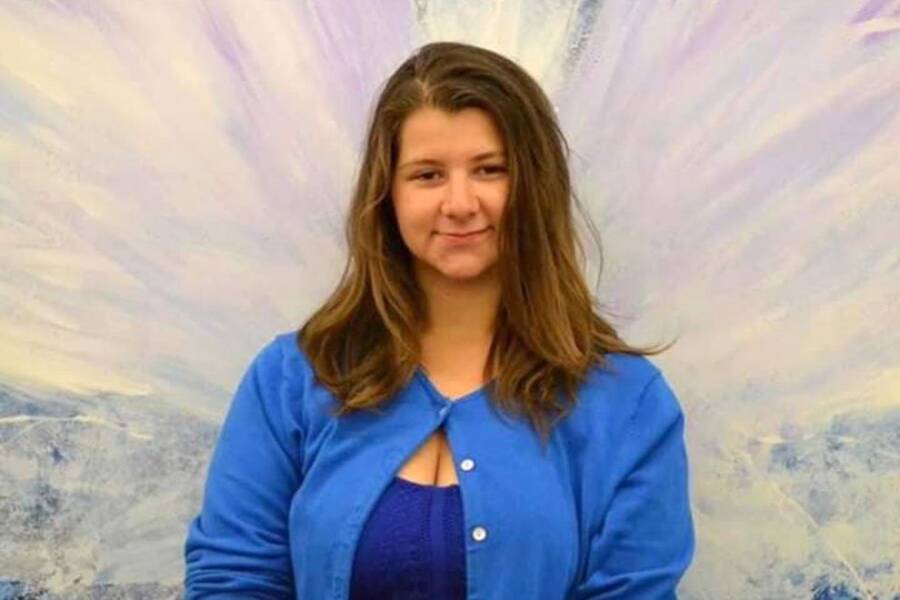 The Hoffman Family/HandoutCynthia Hoffman was 19 years old but her developmental disability kept her at a seventh-grade level.

Pretending to be a multimillionaire on the internet might seem like an innocuous, misguided strategy to impress potential love interests, but for two teenaged girls in Alaska, it proved to be far more sinister when 21-year-old Indiana resident Darin Schilmiller “catfished” one of them to murder the other.

According to The Daily Beast, Schilmiller, under the alias “Tyler” and using a fake profile photo, convinced Alaskan teenager Denali Brehmer from nearly 4,000 miles away to murder her best friend with the promise of $9 million.

On June 14, a grand jury indicted six people in the killing of 19-year-old Cynthia Hoffman. Police said Brehmer recruited four others to help her murder Hoffman. 16-year-old Kayden McIntosh invited Hoffman on a hike which soon went off the path. Hoffman was subsequently duct-taped before being shot in the head by McIntosh and dumped into a nearby river. The victim was described in charging documents as Brehmer’s best friend. Her body was found in a creek on June 4.

“Cynthia Hoffman, who was allegedly ‘best friends’ with Brehmer, was selected by the group as the murder victim,” the court papers confirmed.

He instructed her to assault a child and send him videos of the deed. He also told her to assault a 15-year-old. The footage was discovered when detectives subpoenaed Verizon for Schilmiller’s cell phone account. He’s currently in FBI custody and awaiting extradition to Alaska.

Brehmer and Schilmiller, meanwhile, received additional charges of solicitation to commit murder in the first degree. Brehmer was indicted on one count and McIntosh on four counts of tampering with physical evidence.

According to Alaska’s Department of Law, all of them face up to 99 years in prison for each of the murder and conspiracy charges, while Brehmer and McIntosh also face five years for each of the tampering charges.

The question at the root of this horrific story, of course, is obvious: how, exactly, does a seemingly normal teenager get convinced by a man she’s never met to murder her best friend? 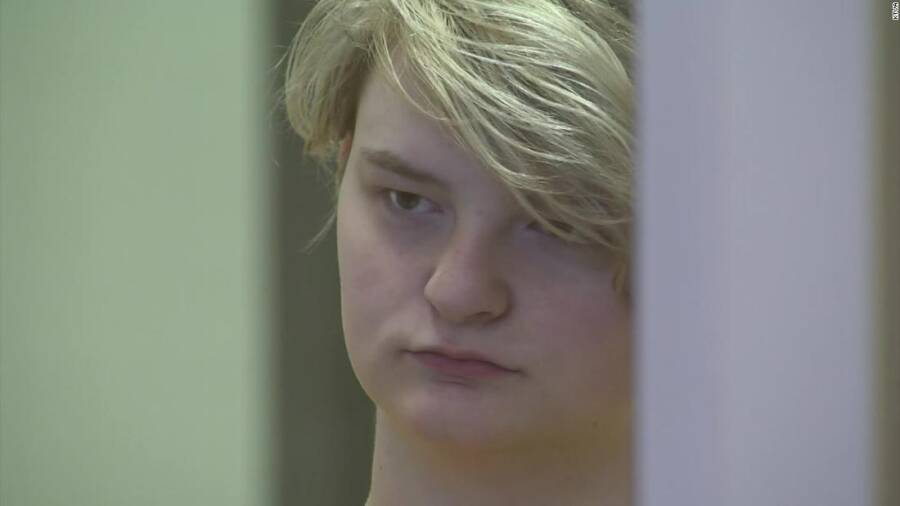 TwitterDenali Brehmer’s charges could land her in prison for the rest of her life. She claimed to regret her actions in a Snapchat video after the killing.

Oddly enough, it didn’t take long for the murder plot to come into focus after Schilmiller and Brehmer, who called herself “Angel” online, started their virtual relationship. “Tyler” first sent “Angel” a fake photo of himself from his New Salisbury, Indiana home.

“He does not look like the young man he portrayed himself to look like, he is not a millionaire, and he lives in Indiana,” the bail memorandum explained.

The initial plan that the two virtual lovers — who had never met in real life — agreed upon was that “Tyler” would pay “Angel” $9 million for the rape and murder of someone in Alaska, as long as she sent him photos and videos of the act. It’s unclear if either had become aware of the other’s real identity before the crime.

In a horrific twist of logic, Brehmer allegedly chose Hoffman for the crime because she was her closest friend. It would be easy to use her trust against her as luring a stranger into the woods is much harder, of course.

With four friends at her side, including two juvenile defendants only identified as Jane and Jone Doe thus far, the agreement to kill Hoffman and split the money was made in May or early June. 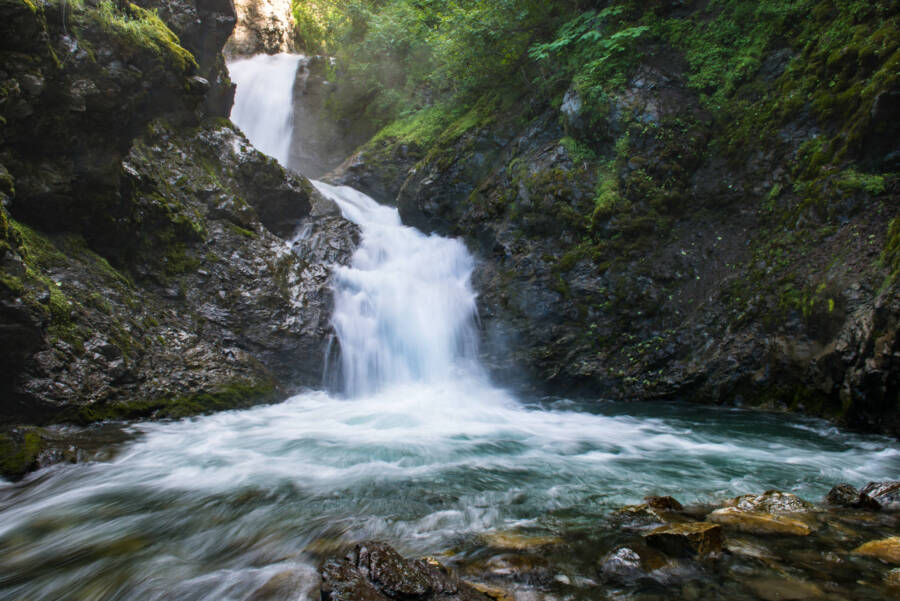 Alaska.OrgBrehmer and her accomplices lured Hoffman on a seemingly casual hike at Thunderbird Falls when they brutally murdered her.

Brehmer and McIntosh drove Hoffman out to the Thunderbird Falls trail along the Eklutna River on June 2 using Leyland’s car. They used duct tape to tie Hoffman’s hands and feet together and tape her mouth shut.

Throughout this terrifying display of indifference, Brehmer sent Schilmiller videos and photos.

When the 19-year-old had been fatally shot, Brehmer casually texted Hoffman’s family and claimed that she dropped her off Polar Bear Park in Anchorage. She then deleted all of her text messages with “Tyler,” seemingly convinced that swiping to the left and hitting “delete” would remove the digital trail of evidence.

The next day, Hoffman was reported missing. When her body was found on June 4, authorities began to dig deep — which didn’t take too much effort, frankly. After a search warrant for Brehmer’s phone, explicit images of children were found. They also discovered these were sent to “Babe.”

The mystery was essentially already unraveled at this point. During a police interview on June 7, Brehmer admitted that this mysterious “Babe” was a man named “Tyler” whom she believed lived in Kansas. Brehmer didn’t even know yet that she’d been duped. 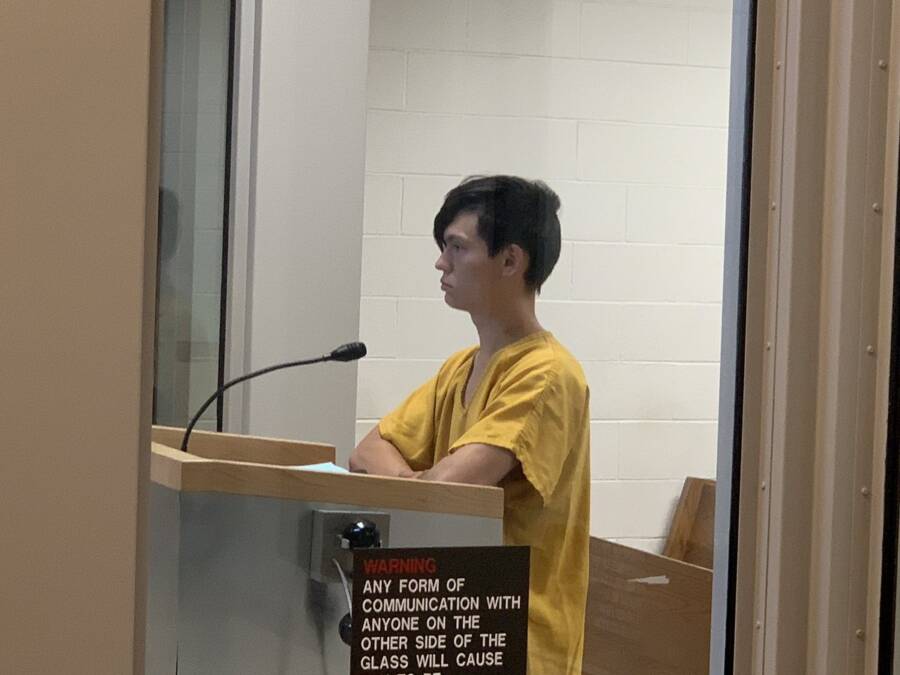 TwitterCaleb Leyland allowed Brehmer and McIntosh to use his car for the murder and now faces a second degree murder charge.

The FBI investigation found text messages between Schilmiller and Brehmer that outlined their plans to assault children: “So are you going to the 14 year old??” Schilmiller asked. “Gonna go buy weed first,” Brehmer replied. “I wanna get her high for it so she doesn’t fight me…I love you.”

An RTV6 News segment on Darin Schilmiller’s involvement in the murder.

Brehmer later texted him, “I wish I never made a deal with you in the first place…we can meet but once I see a cop I’m telling him or her that I made you rape people and killed cece,” and she did, at first, try to hide her involvement in the murder.

Brehmer initially told the police that she, Hoffman, and McIntosh were getting high and peacefully driving around Anchorage shortly before the murder. They stopped at a parking lot near the crime scene to play around in the forest — and duct-tape each other for fun, presumably to naturally introduce the idea to the victim.

“CeeCee was bound by her ankles and wrists with duct tape,” the court filing said. “She also had grey duct tape placed over her mouth. However, CeeCee started to panic.”

Perhaps reconsidering their plan, Brehmer and McIntosh ripped the tape off of Hoffman’s mouth and hands. The helpless girl, still bound by her feet, threatened her supposed friends that she’d call the cops if they didn’t let her go — that she’d say they kidnapped her and sexually assaulted her.

McIntosh then grabbed the 9mm pistol Brehmer was holding and shot Hoffman in the head. Brehmer recalled that she was still twitching when McIntosh dumped her into the creek. The message to Hoffman’s family was McIntosh’s idea, Brehmer claimed — which she only complied with out of fear.

McIntosh said he “blacked out” during the actual period of violence, which began with taping Hoffman up and taking photos of her. He said he wasn’t sure if the bullet in the head had killed her, or if she drowned. Nonetheless, the killers burned Hoffman’s purse, clothing, and ID in a distant neighborhood. 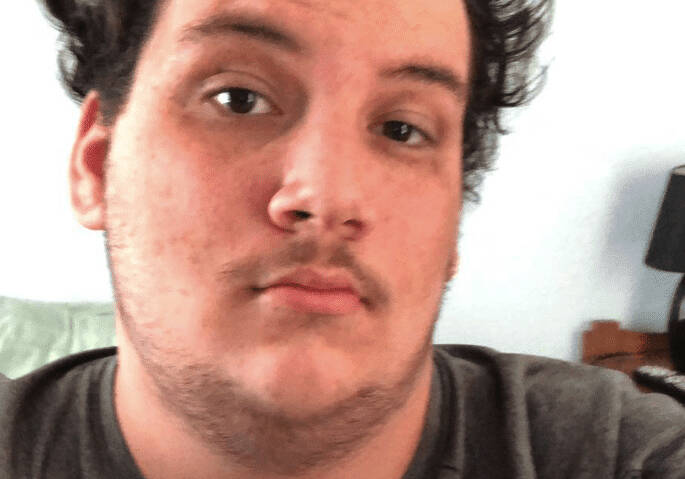 TwitterDarin Schilmiller faces child pornography charges in addition to conspiracy to commit murder. He is being extradited from Indiana to Alaska for due process.

Brehmer also at first denied knowing anything at all about the plans to kill Hoffman. She claimed they were just playing in the woods when McIntosh grabbed the gun and shot her. Of course, the teenager took a Snapchat video in which she confessed to the killing:

“I just want to thank everyone that’s been there for me my whole life and these past few years and everything,” she said. “I fucked up, I know I did, if I could take back what I’ve done, I can’t. I’m sorry everybody, my family, my friends…I guess you will hear from me when you hear from me, but I won’t be back for a long time. I’m sorry, I didn’t mean to do it. I didn’t mean to do it.”

The bail memorandum revealed that Schilmiller confessed to all main elements of the gruesome conspiracy. He said Brehmer sent him photos and videos throughout the incident and of Hoffman’s dead body afterward.

“He admitted to convincing Brehmer that he was a millionaire and that he would pay her millions of dollars to kill Hoffman,” the memorandum said. “Schilmiller further admitted he and Brehmer discussed murdering another person after Hoffman, but that the plan was ultimately abandoned.”

He also said he tried to blackmail Brehmer into raping people.

KTVA News footage of the funeral procession of Cynthia Hoffman.

Timothy Hoffman said that his daughter met Brehmer in high school and that they were best friends. His late daughter had a developmental disability, which made her vulnerable and presumably reduced some of her personal agency.

“Her disability just made her want to have friends,” he said. “That’s all she wanted, was just to be her friend.”

The grieving father added that Hoffman always tried her best to make him proud — that she was studying in a post-high school skills program, and was excited to get her driver’s permit soon. She was intellectually at a seventh-grade level but was resilient and confident to forge ahead.

Hoffman’s obituary said she “had worked in restaurants but truly enjoyed being her dad’s right-hand man in his handyman business. Cynthia had such a kind heart and was a friend too many people. She is truly going to be missed.”