Meet the Desert Rain Frog, The Squeaky Amphibian That Broke the Internet

At 2.5 inches with stubby legs and a squeaky-toy squeal, you've seen or heard nothing like the desert rain frog.

When wildlife photographer Dean Boshoff traveled to South Africa’s coastline, he wanted to capture its incredible sand dunes. What he shot instead was far better: the desert rain frog.

Boshoff was in Port Nolloth in the Northern Cape province of South Africa when he came across a whole lot of squeaking. “It alerted me to its presence with its fearsome war cry,” Boshoff wrote. His subsequent video went viral and nearly broke the internet in 2013 and now counts more than 17 million views — with good reason.

The desert rain frog, or Breviceps macrops, lives in the coastal areas of South Africa and Namibia. It faces threats of endangerment from habitat loss and diamond mines.

This frog only wanders out at night and munches on insects — which is typical of most frogs. Also like other frogs, this round little creature camouflages well into its environment: desert rain frogs are a yellow-and-brown color, which closely matches their native habitat. Even during daylight hours, it would be hard to spot one. The desert rain frog buries itself to stay hydrated under 10-20 cm of sand where it is moist.

Despite these normal frog characteristics, however, this cute little devil is far from ordinary.

YouTube/Dean Boshoff A desert rain frog, sitting proudly on the beach just after a nap.

For one thing, the isolated place in which this frog lives is remarkable. Unlike the majority of other frogs that live in forests or swamps, the desert rain frog stays buried in the sands on the Namaqualand coast of South Africa and coastal Namibia during the day.

Frogs need water on their skin to survive, which proves a difficult task in the desert rain frog’s habitat. But this frog manages to survive the harsh and arid conditions because sea fog regularly rolls in from the Atlantic ocean, which makes the area less dry.

Rather than stick out a tongue to get water, a transparent patch on their undersides of the frog absorbs moisture directly from the sand, which is why they bury themselves.

Instead of strong legs for jumping, these frogs have short, stubby legs with paddle-like flanges on their back feet. Instead of hopping, then, they walk. Their tiny feet act as diggers to quickly navigate the sandy beach. These frogs need to dig fast because they must dig deeper for water if it gets too dry.

‘The Battle Squeak Of The Desert Frog,’ by Dean Boshoff.

Normal frogs let out a loud ribbit or croaking sound when they try to attract mates or feel threatened, but that is not so for this rare frog. Instead, the desert rain frog squeaks and it sounds kind of like a dog’s chew toy. But only when the frog is angry. Perhaps this particular frog didn’t like Boshoff waking him up from a daytime nap, so he let him have it.

Unlike other African animals, this frog isn’t ferocious nor poisonous. Its bite is about on par with its bark.

Desert rain frogs grow to about 2.5 inches long and their bodies are round and chubby compared to their legs. 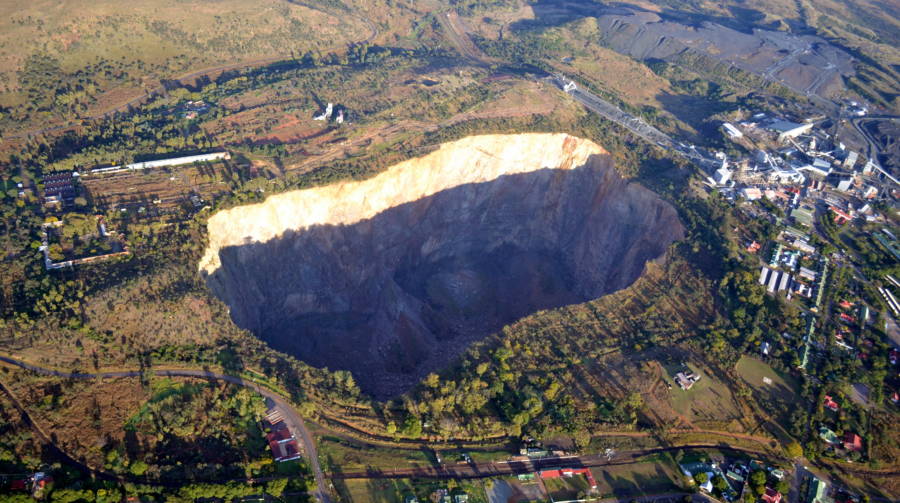 Wikimedia Commons Diamond mines like this one threaten the desert rain frog’s habitat.

When scientists studied the frog in 1977, they related that the species was abundant in the region. However, a 2011 study reported only finding the frog where sea fog was most frequent and now the frog’s habitat is reduced to a six-mile-wide coastal strip confirmed in 11 locations in a 400-km-radius. In particular, researchers discovered that desert rain frogs exist in areas that experience more than 100 fog-days per year.

Since the area is rich in diamond and copper deposit, the exploitation of those resources via extensive mining has polluted the area, which caused their numbers to dwindle. Pollution is not the only culprit, though: encroachment by humans, alongside housing developments, pose a threat to the habitat as well.

Hopefully, the chorus of those squeaking desert rain frogs becomes a raging cry for help to stop the diamond mines and keep the fogs rolling in.

For more froggy goodness, check out this gross species that looks like a pig. Or, take a look at this frog whose heart is visible through its chest.