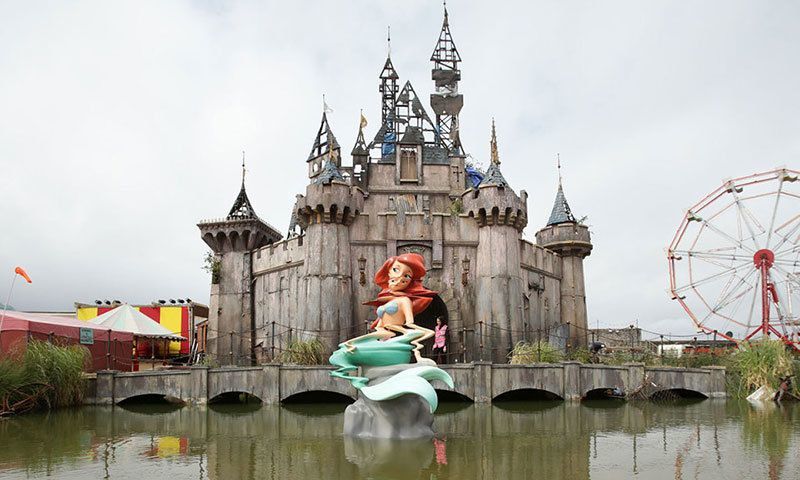 Dismaland, street artist Banksy’s most recent and most elaborate endeavor, contains everything you’d expect to find at an ordinary theme park—a ferris wheel, fair games, rides, and colorful attractions—and yet manages to circumvent any and all semblances of happiness. 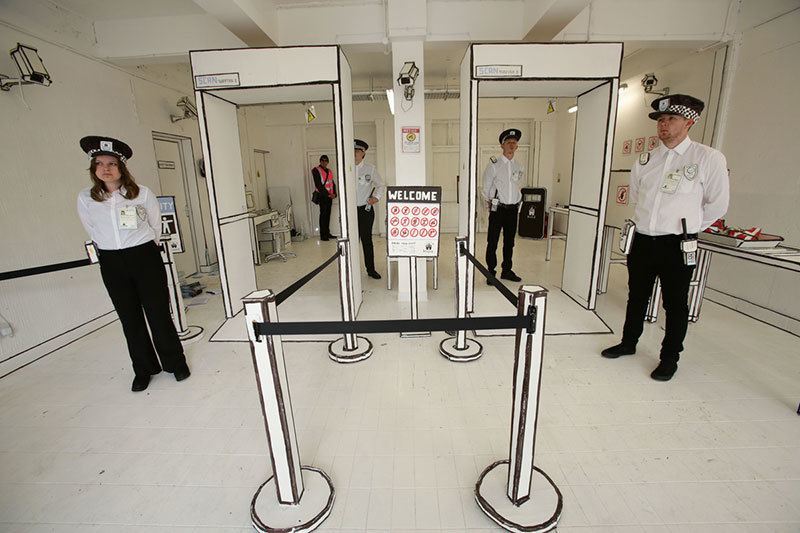 Banksy is best known for his street art, and his work at Dismaland explores the same themes he’s been working through in urban settings: war, revolution, political corruption, and economic inequality. In Dismaland, though, Banksy collaborated with other artists. The park’s three galleries feature work from 58 artists, representing 17 different cultures. Banksy himself unveiled 10 new pieces.

In spite—or perhaps because—of the park’s macabre appearance, Dismaland has been making waves worldwide. People can’t seem to get enough of Dismaland’s provocative art, anarchist bookstore and Mickey Mouse-eared attendants who are told to respond to all questions with a sullen response. Indeed, the park’s online ticketing system crashed within the first few days of operation, and a week’s worth of tickets—sold at $5 a pop—were sold within a single hour. 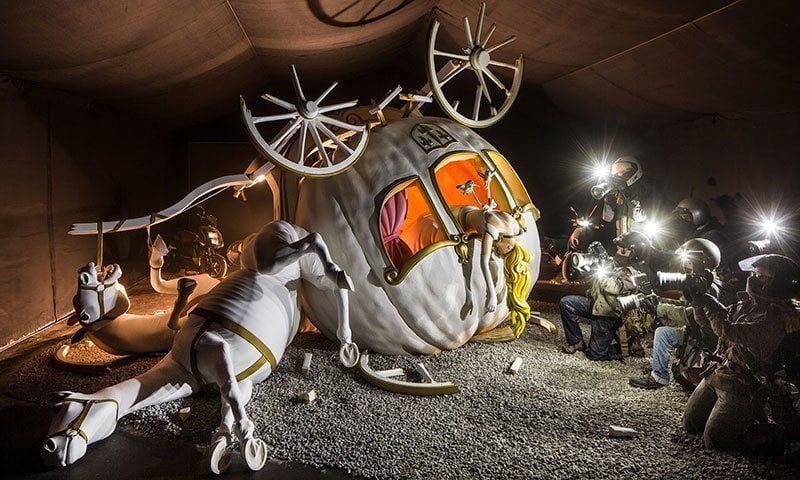 Evoking the death of Princess Diana (or the sickness of celebrity obsession in general), the sculpture of Cinderella’s crash is truly haunting. Source: Movie Pilot

According to Banksy, the theme park is a “festival of art, amusements and entry-level anarchism.” Get a glimpse of what all the hype is about in these images from the apocalyptic amusement park: 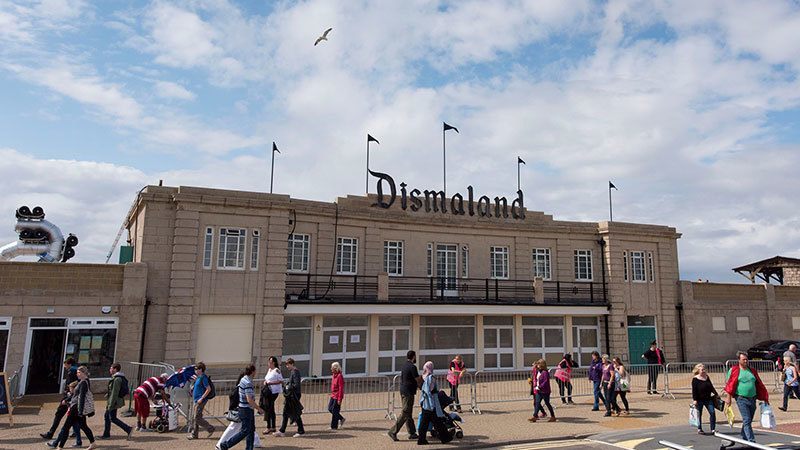 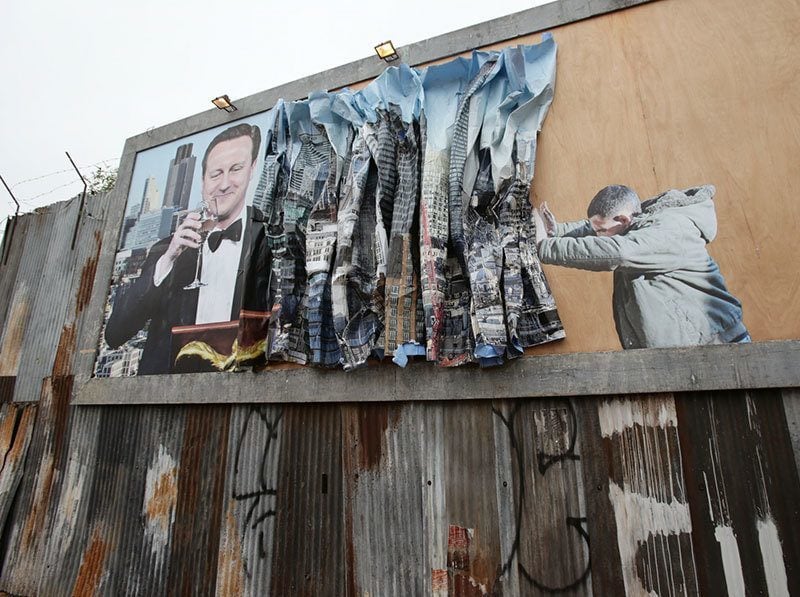 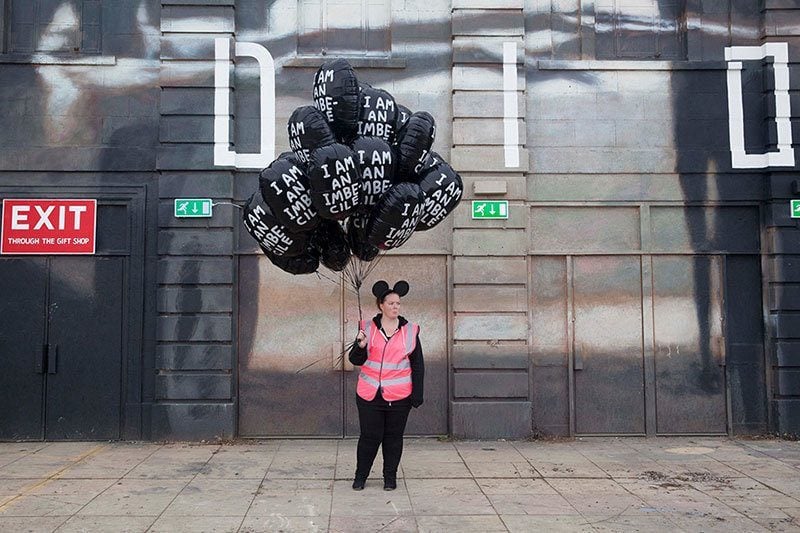 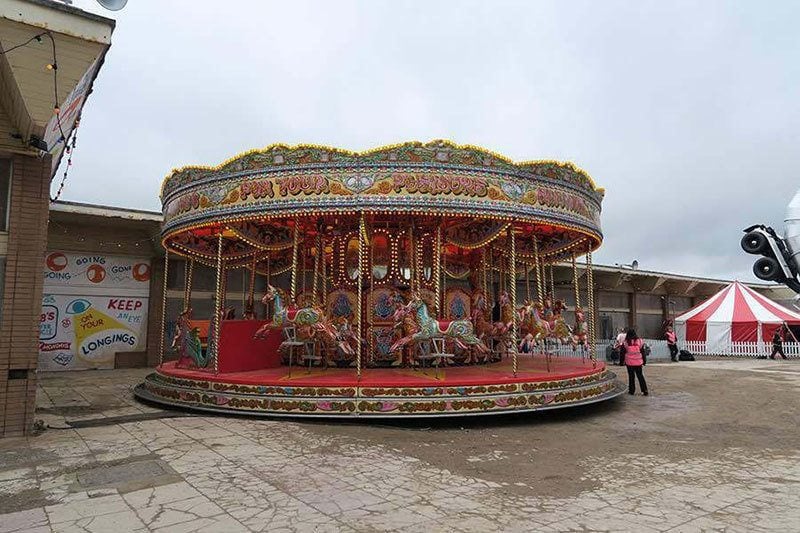 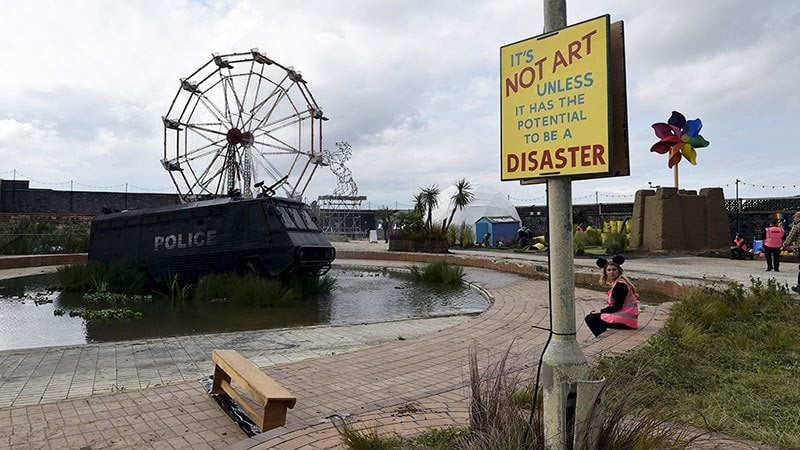 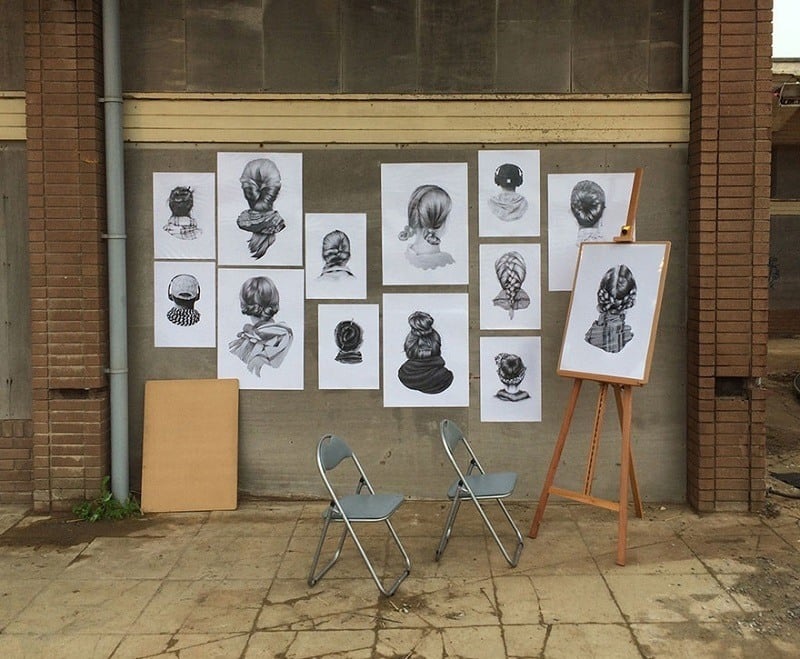 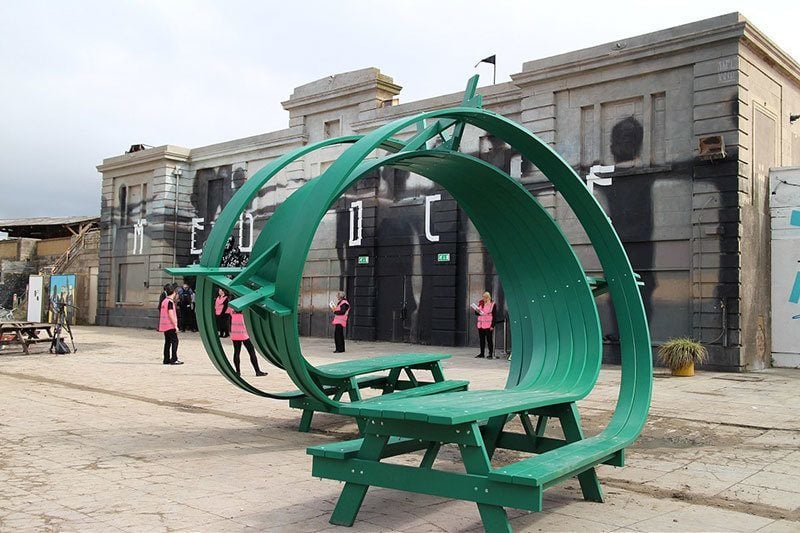 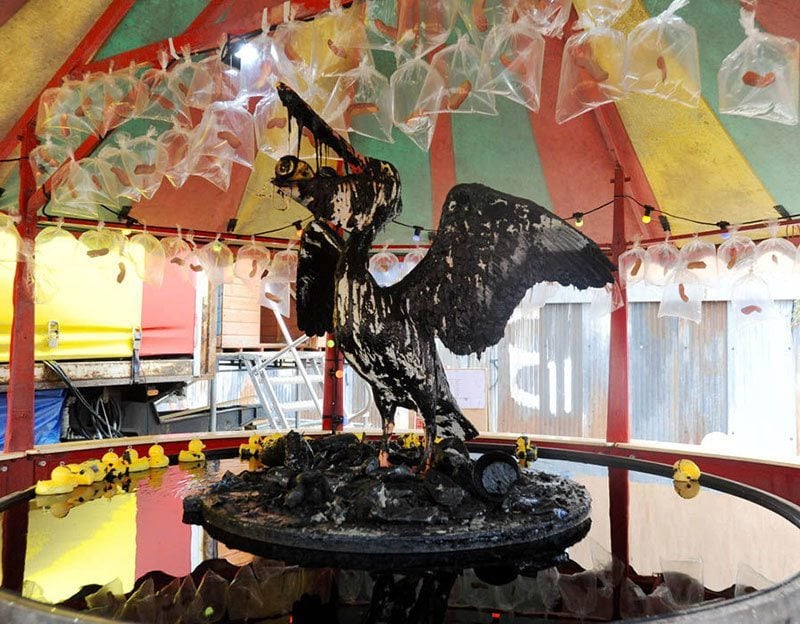 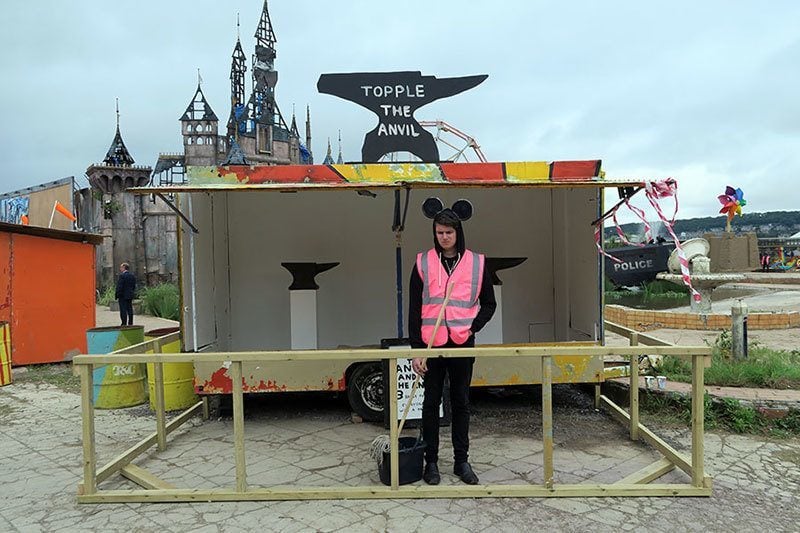 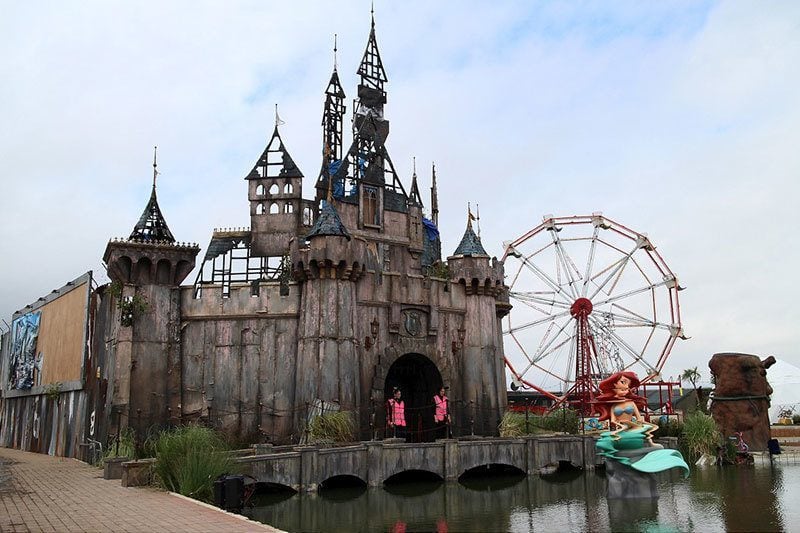 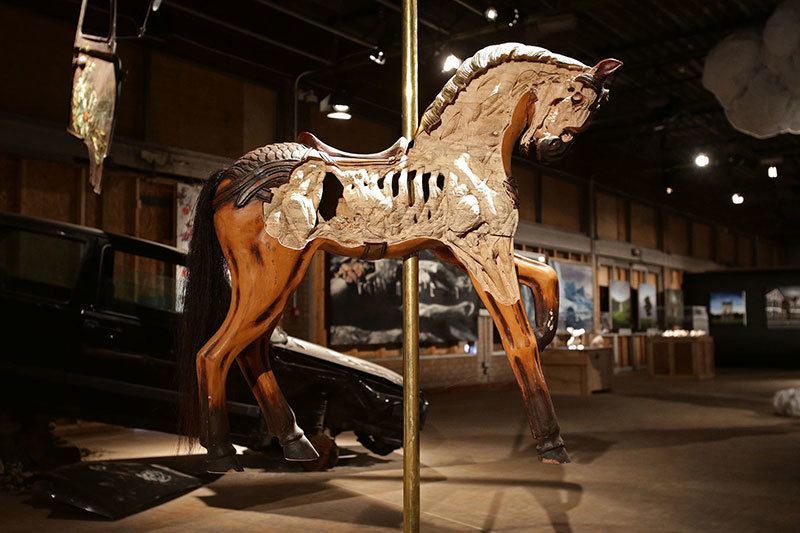 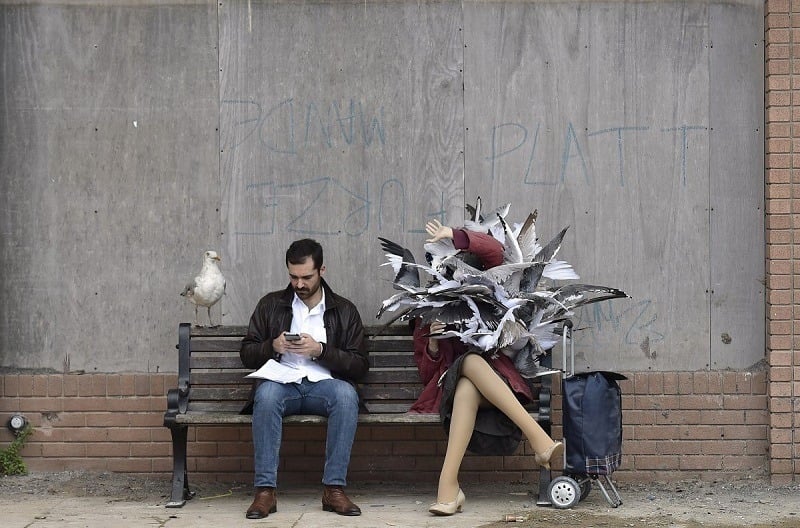 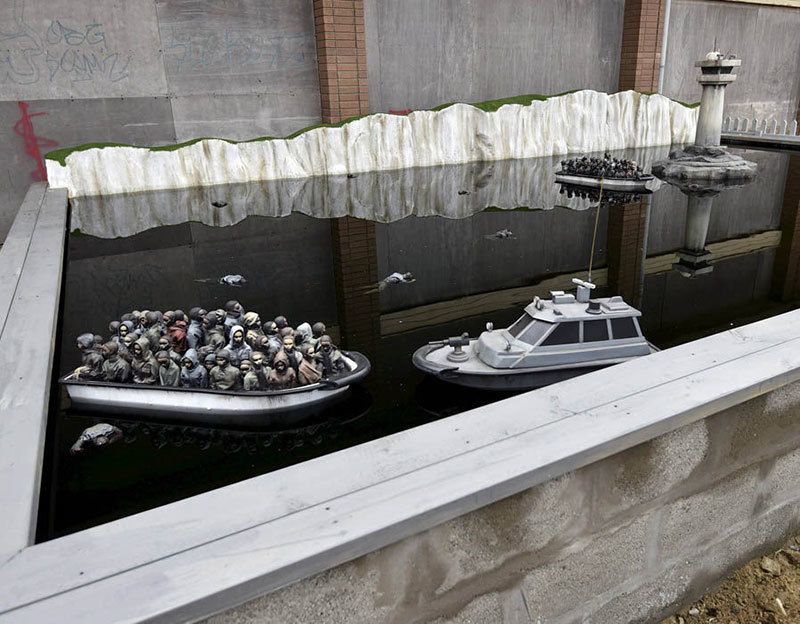 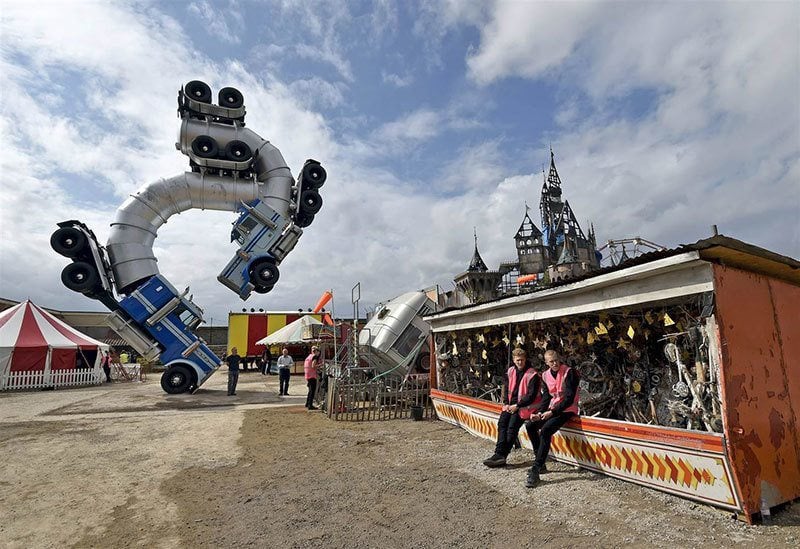 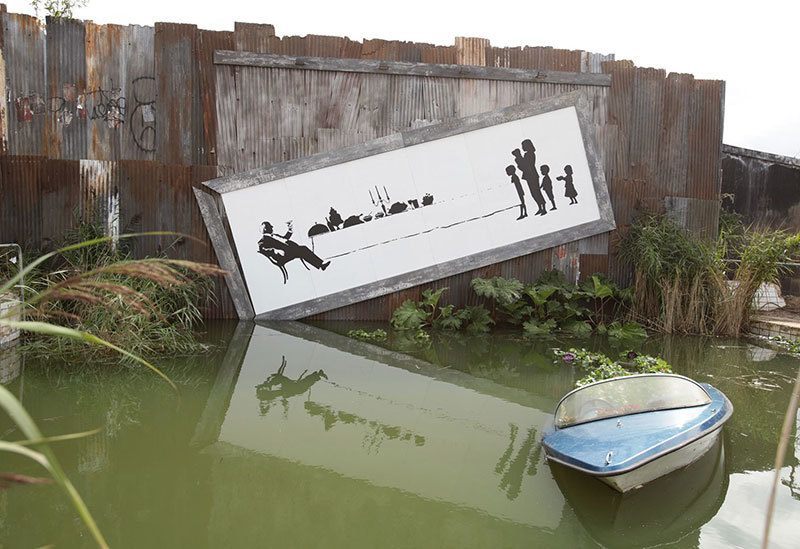 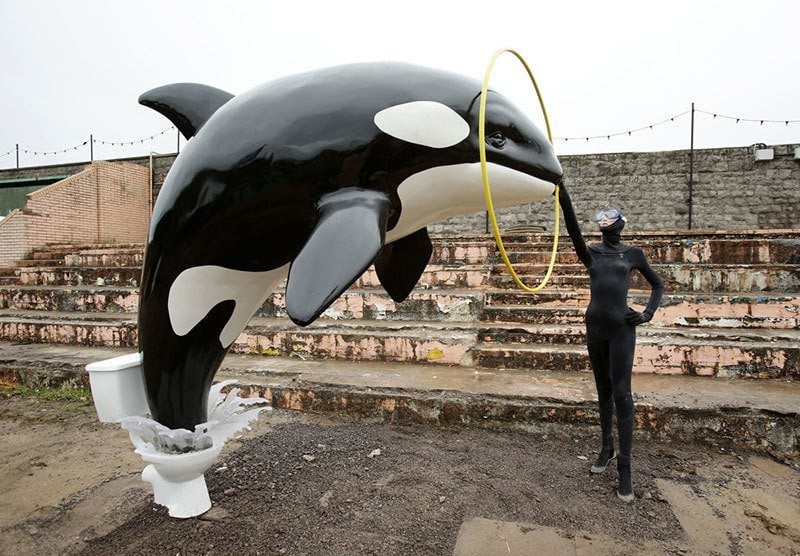 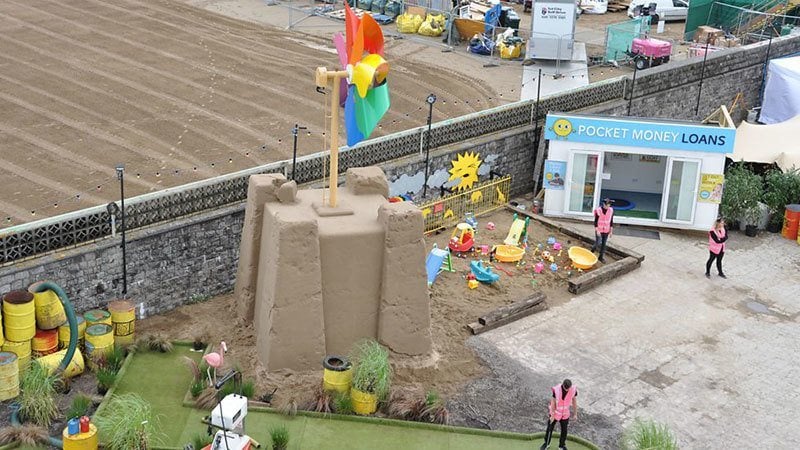 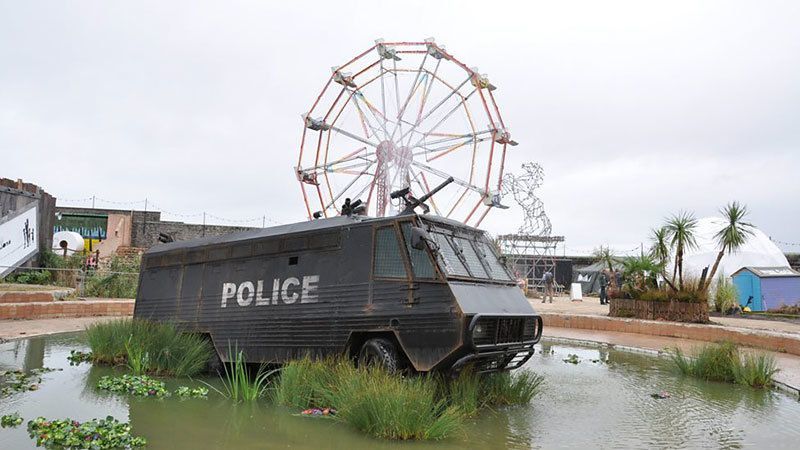 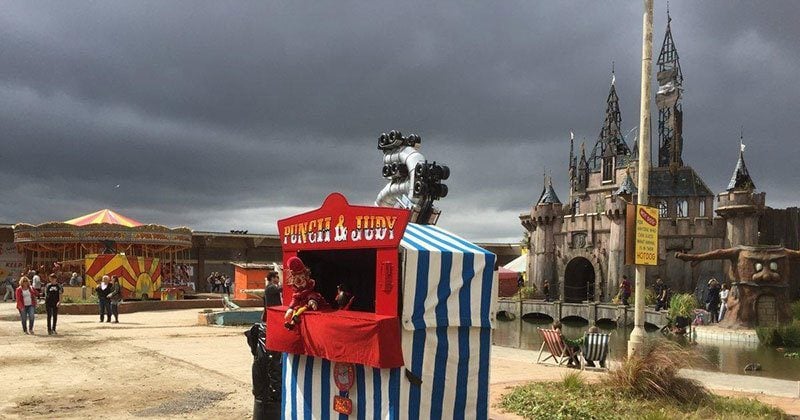 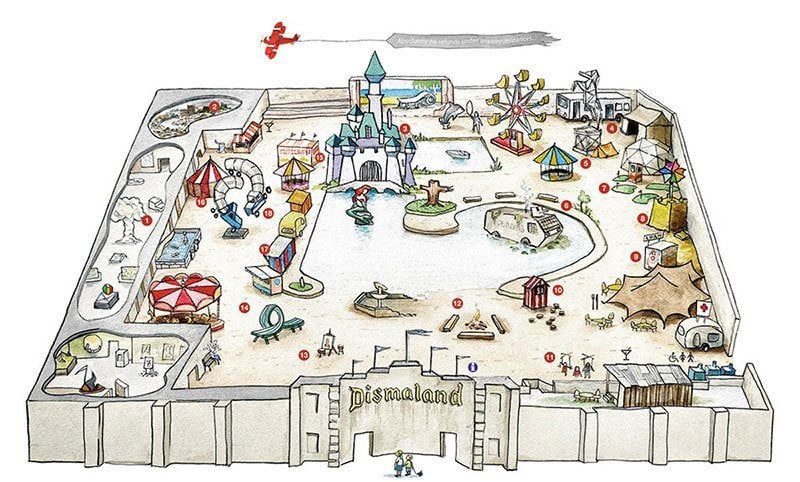 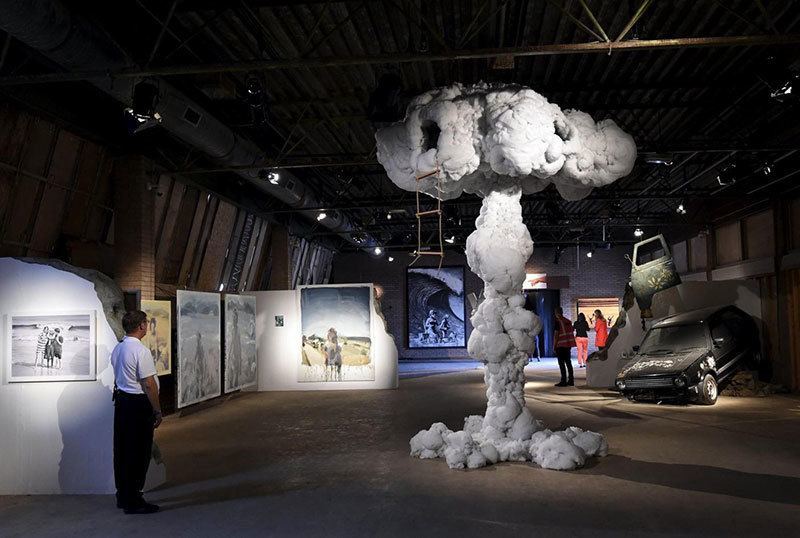 1 of 23
Source: Forbes
2 of 23
Source: Newsweek
3 of 23
Stern theme park employees parade around Dismaland wearing frowns and ironic mouse ears. Source: What the Hellz
4 of 23
Officially the creepiest theme part carnival. Source: Boing Boing
5 of 23
Evoking the death of Princess Diana (or the sickness of celebrity obsession in general), the sculpture of Cinderella's crash is truly haunting. Source: Movie Pilot
6 of 23
Source: The Times
7 of 23
Caricatures, Banksy style. Source: Viral Thread
8 of 23
Good luck eating at this warped picnic table. Source: Bizarre Beyond Belief
9 of 23
Dismaland offers its own spin on traditional fair games, as seen in this not-so-inviting stand. Source: Express
10 of 23
Would you pay to play this fair game? Source: Journal du Geek
11 of 23
Dismaland's decaying castle looks a whole lot like Disneyland's glittering castle...minus all the glam. Source: Arrested Motion
12 of 23
Source: Vogue
13 of 23
Source: Business Insider
14 of 23
In this piece by Banksy, migrants crowd together on boats, while bodies float in the water around them. Source: Express
15 of 23
Source: NBC News
16 of 23
Unlike the crystal clear waters of most theme parks, Dismaland ends up looking like an abandoned swamp. Source: Dazed Digital
17 of 23
Source: Baltimore Sun
18 of 23
Dismaland's take on the sand pit. Source: BBC
19 of 23
Source: BBC
20 of 23
Another unfriendly fair game, Punch Judy. Source: NY Daily News
21 of 23
Dismaland legend. Source: This Is Colossal
22 of 23
Source: IlFatto Quotidiano
23 of 23 In this case, pictures are worth a thousand rather depressing words, but nothing can quite capture Dismaland's essence like this advertisement for the "family theme park unsuitable for children":