"To find copies of the Divan of great quality…is rare enough, but this is also signed by a famous calligrapher with beautiful quality illumination, and dedicated to a key figure in the Persian and Islamic arts of the book." 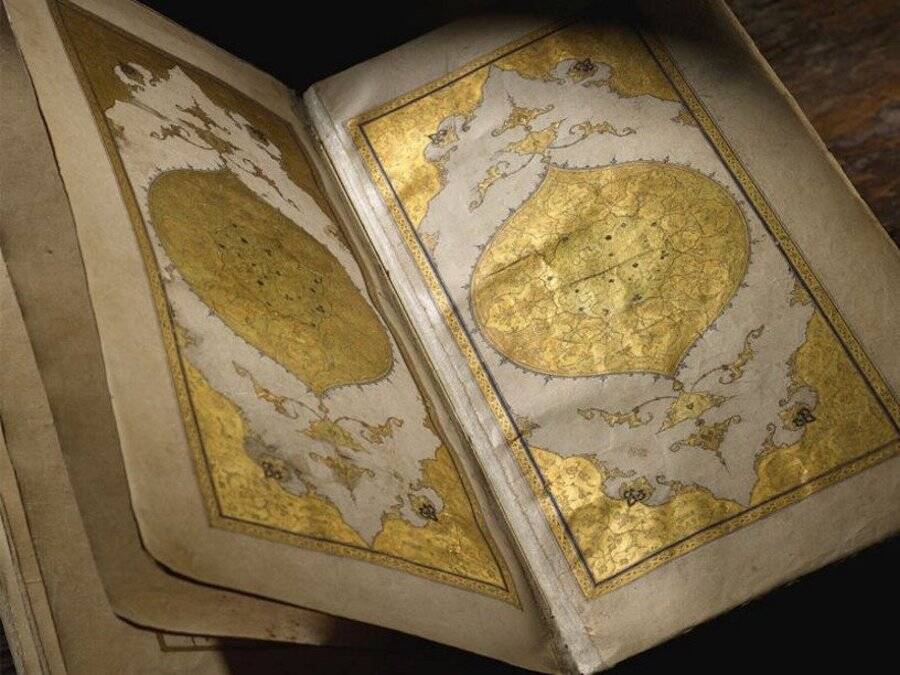 Sotheby’sThe philosophical and mystical work is filled with beautifully elaborate designs and in “magnificent” condition.

One of the earliest copies of Divan — a historic work of poetry by world-renowned 14th-century Persian author Hafez — is officially set to be auctioned in April 2020. The gold-illuminated manuscript is dated to 1462 and described as being in “magnificent” condition, but was almost lost forever.

According to The Guardian, the coveted copy had been part of Islamic art collector Jafar Ghazi’s collection. When he died in Germany in 2007, however, his family realized that it had been stolen — alongside hundreds of other books in his possession.

Police were able to recover 175 of them in 2011, but the Divan was nowhere to be found. As financial rewards are often the most productive incentives, German police offered anyone able to track it down $54,000 (€50,000).

According to Smithsonian, that’s when the “Indiana Jones of the art world” came into the picture. 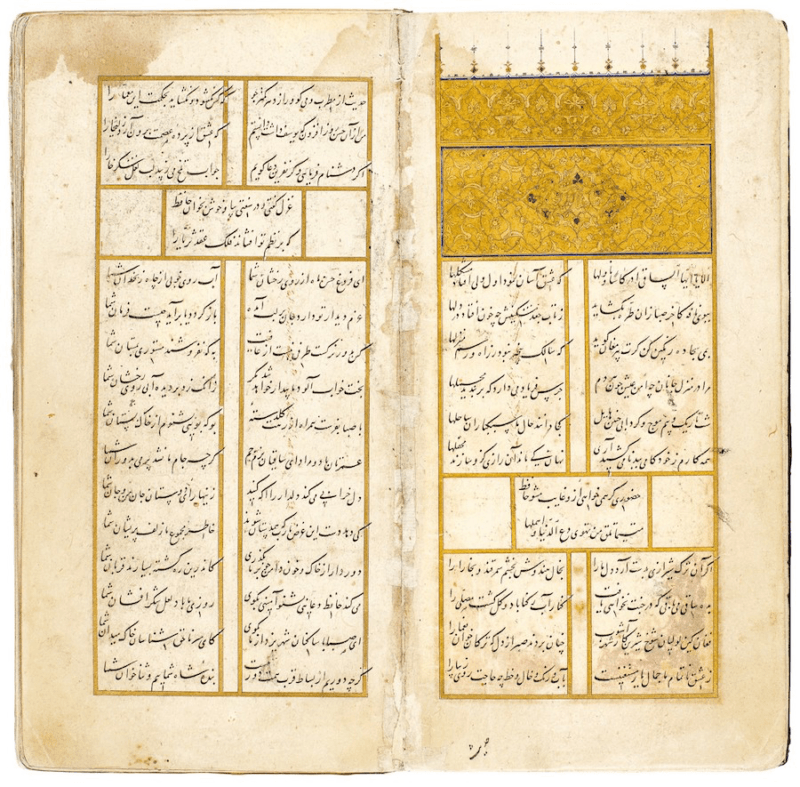 Sotheby’sArt detective Arthur Brand, who previously located a pair of bronze horses sculpted for Adolf Hitler and a stolen Picasso, managed to track the stolen manuscript down.

Arthur Brand’s résumé speaks for itself. Not only has he previously located a pair of bronze horses sculpted for Adolf Hitler, himself, but he was able to retrieve a stolen Picasso, as well. As such, he was certainly up to the task of finding the Divan of Hafez.

The process was nonetheless something right out of a movie — with intrigue, deception, and ultimately, triumph, rounding out the investigation. Brand said he was initially contacted in 2018 by an Iranian art dealer whom Iranian embassy officials approached for help.

In a cinematic race against the clock, Brand flew to London and to find a man who’d unknowingly purchased the stolen work.

“The buyer was shocked and furious,” said Brand. “After all, he was sold a stolen book and now everyone was searching for it, including the Iranian government.”

Fortunately, Brand was able to persuade the man not to travel to Paris to confront those who had wronged him. The man was adamant about getting his money back — until Brand convinced him to first return the manuscript to German authorities. 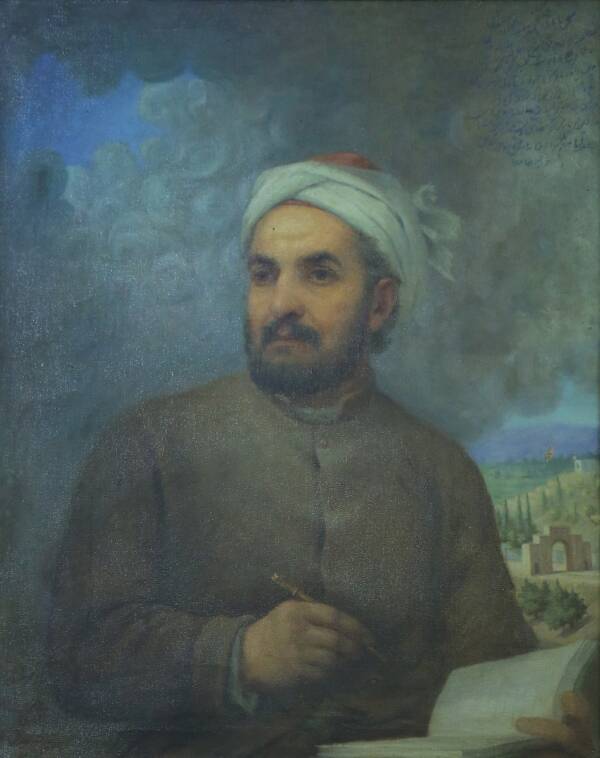 Wikimedia CommonsHafez is revered as one of Iran’s most significant poets to this day, partly due to his mastery of the ghazal, a form of Arabic verse centered on love and loss.

“If he had succeeded, the Divan would disappear again and probably forever,” said Brand. “He had bought a book without knowing that it was stolen but by trying to hand it back to the fence, he would incriminate himself.”

As recently as March 10, Ghazi’s heirs were set to auction the manuscript on April 1, though the global Coronavirus pandemic has likely delayed those plans for the foreseeable future. The book has an estimated value of between $93,000 and $140,000.

“There’s a huge reverence for Hafez in Iran and globally, said Sotheby’s specialist Benedict Carter. “To find copies of the Divan of great quality…is rare enough, but this is also signed by a famous calligrapher with beautiful quality illumination, and dedicated to a key figure in the Persian and Islamic arts of the book.”

Dedicated to the Qara Qoyunlu prince Pir Budaq, who was the eldest son of the ruler of Azerbaijan and most of Iran, the manuscript is just as historic as it is a coveted literary document. 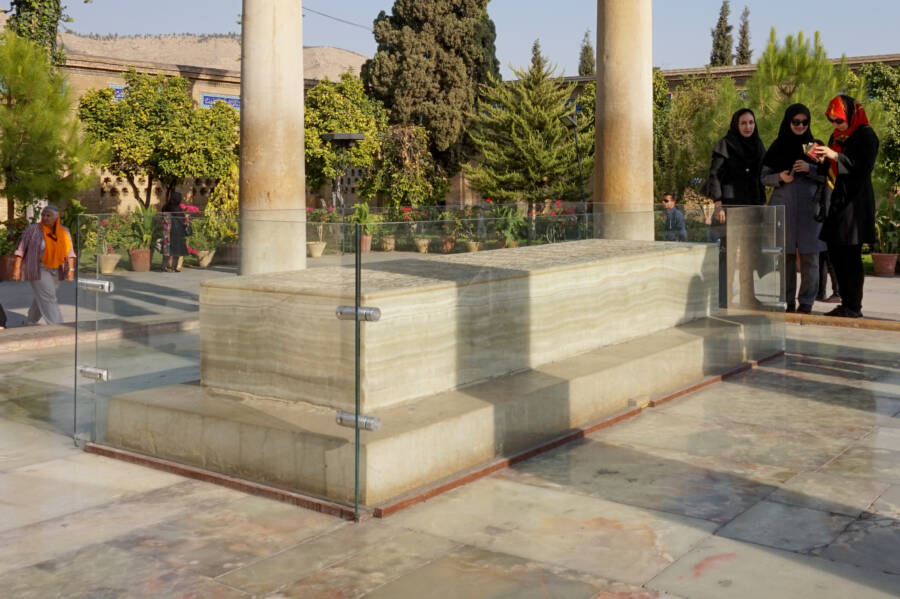 Wikimedia CommonsThe tomb of Hafez in Shiraz, Iran remains a popular destination for those familiar with his cultural and historic contributions to the literary world.

“His provenance is a sign of quality in itself because he had a great collection,” said Carter, adding that the book was “testament to Pir Budaq’s bibliophile pursuits and an important witness to the grandeur that must have been his library.”

As for Hafez, himself, the Shiraz-born poet remains one of Iran’s most highly-revered writers. Since his death in 1390, his tomb has become a popular destination for those familiar with his artistic contributions.

Perhaps most famously, Hafez mastered the ghazal — a type of Arabic verse revolving around love and loss. This, in addition to the work being dedicated to Budaq, who is commonly credited with turning Baghdad into a major cultural center, has elevated this book’s rediscovery into a serious win.

What could been seen by some as merely locating a stolen manuscript, is to a whole culture and academic field a historic and priceless triumph.

After learning about a stolen 15th-century copy of Iranian poet Hafez’s ‘Divan’ being found by the “Indiana Jones of the art world,” read about the Iranian man who spread a message of peace and victory before his execution. Then, learn about Bonnie and Clyde’s newly-surfaced poetry notebook being auctioned.