The Little-Known Story Of The Dixie Mafia, The ‘Cornbread Cosa Nostra’ Of The South

In the 1960s, the Dixie Mafia emerged as a loose confederation of crooks and con artists based in Biloxi, Mississippi. But years later, it became a terrifying criminal organization.

Often described as the “Cornbread Cosa Nostra,” the Dixie Mafia first emerged in the American South in the 1960s. Unlike the traditional Mafia, this group was not united by ethnic heritage and had no known hierarchy or oath. Instead, the Dixie Mafia was a rag-tag band of crooks — who were willing to do just about any crime if there was money involved.

From murdering authority figures to burning down buildings to creating elaborate extortion schemes, the Dixie Mafia was known far and wide as an “anything-for-a-buck gang.” While they were initially based out of Biloxi, Mississippi, it didn’t take long for their reach to spread all across the South. And members only had to obey one rule: “Thou shall not snitch to the cops.” 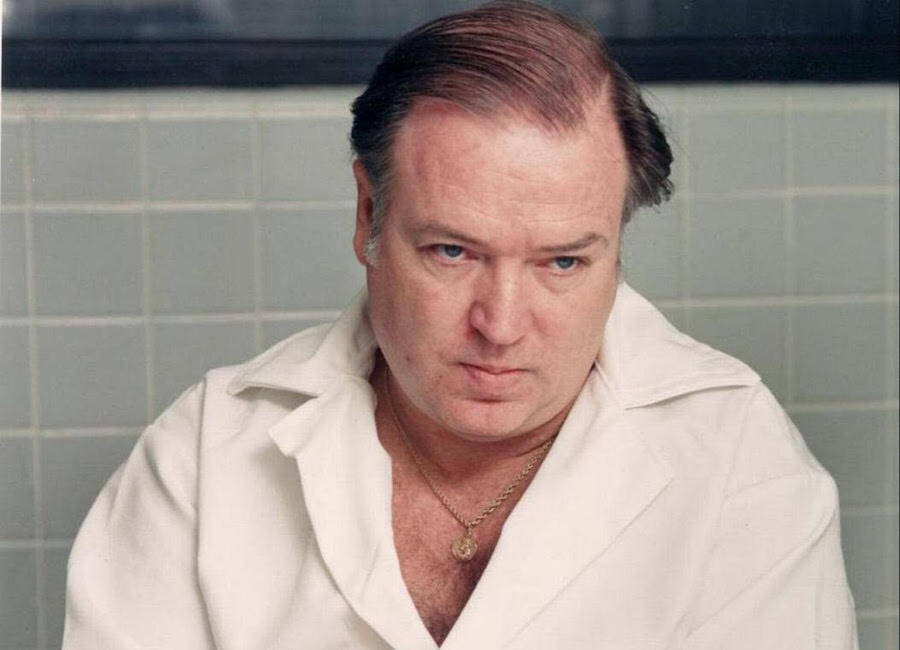 FacebookKirksey McCord Nix Jr., one of the notorious leaders of the Dixie Mafia.

For decades, this gang operated lawlessly and targeted anyone who stood in their way. But by the early 1990s, the syndicate had largely collapsed. One of the top leaders of the Dixie Mafia, Kirksey McCord Nix Jr., had been caught running a scam from prison and even ordering a mob hit from behind bars.

But despite the massive crackdown on former members that followed, many believe that the group is still secretly active today. This is the little-known story of the “Cornbread Cosa Nostra.”

What Is The Dixie Mafia? 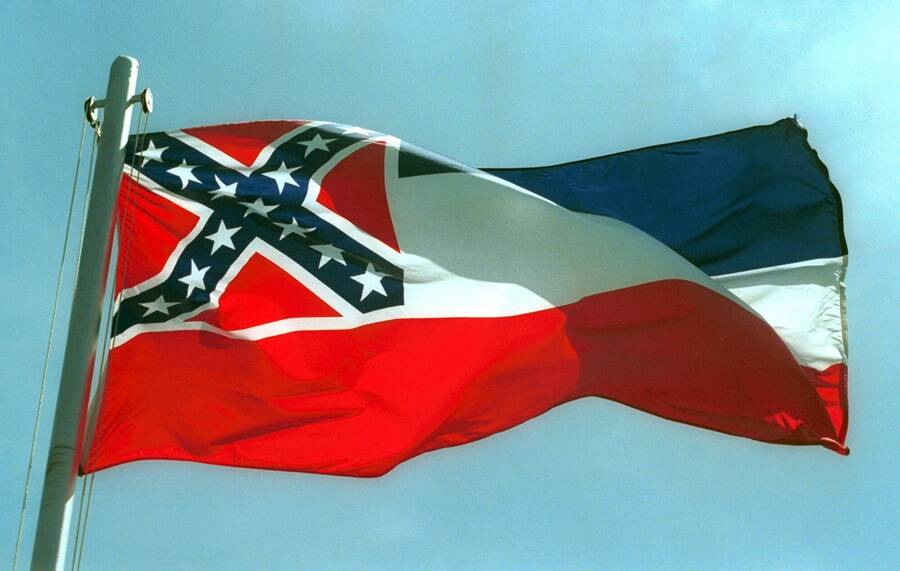 Bill Colgin/Getty ImagesThe Dixie Mafia’s territory stretched all over the South, from Georgia to Oklahoma.

During the 1960s, a group of criminals known as the Dixie Mafia began to creep across cities and towns in the South. Far from a sophisticated organization, this crime ring was a loose network of “thugs,” as the FBI called them. They primarily operated in Biloxi, Mississippi, but the group’s reach soon stretched from Atlanta, Georgia to Tulsa, Oklahoma.

In many ways, Biloxi was an ideal place for the Dixie Mafia’s stomping grounds. With a history of crime older than the United States itself, Biloxi had first gained a reputation as a haven for illicit gambling in the 17th century. This seedy history — and the ongoing corruption of local officials — made the city an attractive place for lawbreakers.

By the 1980s, the blurred lines between government officials and Dixie Mafia members had become so extreme that federal authorities designated the entire Harrison County Sheriff’s Office in Mississippi as a criminal enterprise.

Aside from forming alliances with some members of law enforcement, the Dixie Mafia also worked alongside fellow mobsters. While the Dixie Mafia had no formal ties to La Cosa Nostra, they did have an “understanding” with a notorious Italian-American Mafia mob boss named Carlos Marcello.

Marcello, one of the most powerful leaders in organized crime in America, operated in New Orleans around the same time that the Dixie Mafia was coming to power. Marcello tolerated the Dixie Mafia’s presence as long as they played by his rules and paid for his hospitality. Some Dixie Mafia members were allegedly hired to collect debts and carry out hits for him.

“They were doing anything and everything illegal down here,” said retired FBI Special Agent Keith Bell, who grew up on the Gulf Coast and worked on cases linked to the Dixie Mafia. “For money, the sheriff and officers loyal to him would release prisoners from the county jail, safeguard drug shipments, and hide fugitives. Anything you can think of, they were involved in.”

As one member of the Dixie Mafia put it: “What makes them so dangerous is they don’t think, they just act. They don’t draw a line, everything is fair game.”

The High-Stakes Crimes Of The Gang 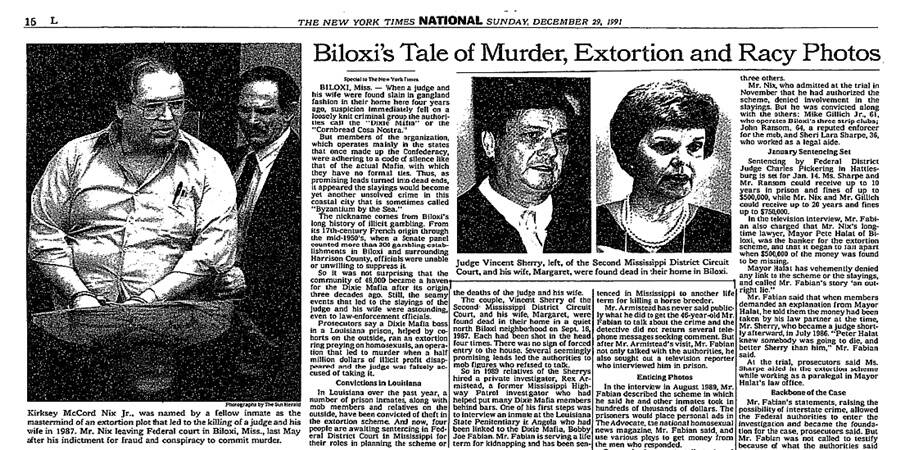 New York TimesA New York Times article on Kirksey McCord Nix Jr.’s conviction for the murder of a Mississippi judge and his wife.

Despite the loose structure that made up the Dixie Mafia network, the Southern crime syndicate was implicated in a number of high-profile cases.

In 1967, McNairy County Sheriff Buford Pusser and his wife were attacked in Tennessee — likely in retaliation for Pusser’s crackdown on the Dixie Mafia. Pusser ultimately survived the attack, but his wife Pauline was killed.

Kirksey McCord Nix Jr., one of the lead figures of the Dixie Mafia, was suspected to be one of the men behind the hit.

In the subsequent years, three suspects (not including Nix), suffered mysterious deaths that may have been caused by Pusser. The sheriff’s revenge story was later depicted in the 1973 film Walking Tall. 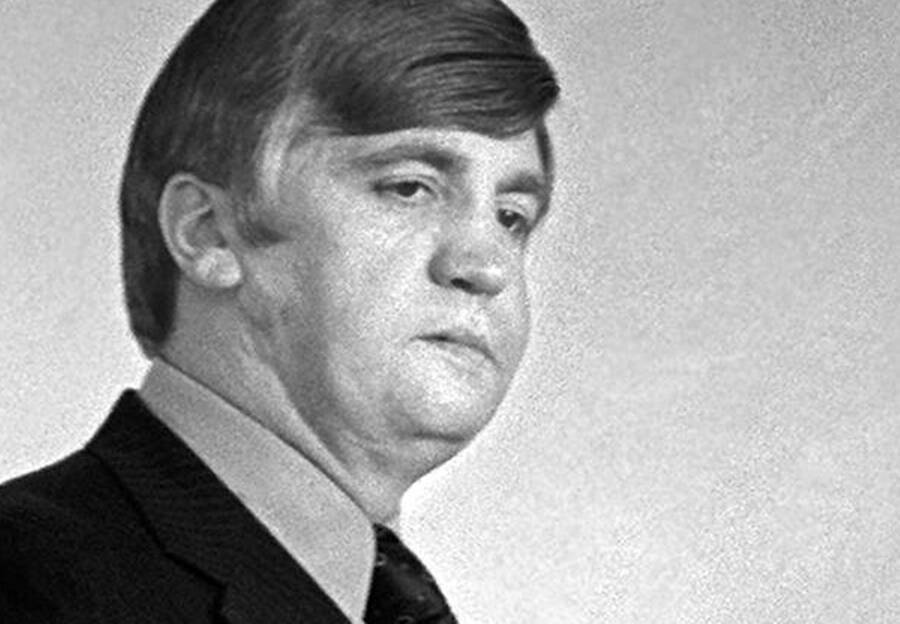 There was also the infamous “Gypsy Camp Murder” in Louisiana. On the night of February 18, 1969, at least five alleged members of the Dixie Mafia ransacked the Skeebow Trailer Court near Lake Pontchartrain, where traveling carnival employees had set up their camp.

Most of the carnival workers were busy manning concessions in the French Quarter of New Orleans that night. Twenty-four others, mostly women and children, had stayed behind at the campsite.

The assailants — who were masked and armed — ambushed the camp and used chains and padlocks to restrain their victims. The gang then broke into 10 trailers in search of valuables and cash. They collected roughly $12,000, although the victims may have underreported the theft to avoid tax troubles.

There were at least two casualties: Margie George, a 44-year-old fortune-teller who was hacked to death for refusing to reveal the location of a supposed safe, and Gary Elbert McDaniel, a known Dixie Mafia associate who turned up dead a month after the murder.

Authorities initially speculated that the gang members had killed McDaniel because they were afraid that he was an informant, but others suspected that he was actually taken out by Pusser.

The Demise Of The Dixie Mafia 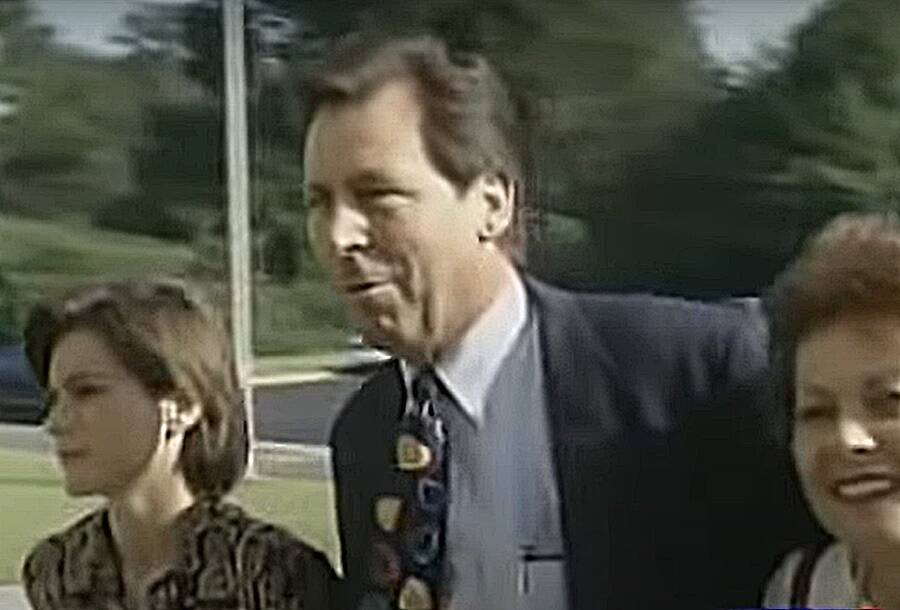 YouTubePete Halat, Kirksey McCord Nix’s former lawyer who once served as the mayor of Biloxi.

By the 1980s, many top members of the Dixie Mafia had found themselves in prison. But even incarceration couldn’t stop them from committing crimes.

Unbeknownst to authorities, Dixie Mafia leader Kirksey McCord Nix Jr. was orchestrating an elaborate extortion scheme from behind bars. At the time, Nix was already serving a life sentence for a 1972 murder (unrelated to the death of Buford Pusser’s wife). But he apparently believed that if he had enough money, he’d be able to get out of prison.

From his prison cell in the Louisiana State Penitentiary, Nix created a “lonely hearts scam” that targeted innocent gay men. He placed ads in gay publications posing as a young “stud” named Eddie Johnson to attract correspondence from unsuspecting readers.

When the victims got in touch, Nix duped them into sending the mob large sums of money to pay for his “legal defense.” Before long, other Dixie Mafia inmates got involved in the scam, placing more fake photos in gay publications and coming up with tall tales about why they needed more money before they could leave jail (or wherever else they claimed to be).

“A lot of money came flowing in,” said retired FBI Special Agent Keith Bell. “There were hundreds of victims. One guy in Kansas mortgaged his house and sent $30,000 to the scammers over a period of months.” To make matters worse, some of the prisoners eventually confessed the scheme to victims and threatened to out them if they told anyone. Meanwhile, the Dixie Mafia received hundreds of thousands of dollars during this time.

But the operation unraveled when half a million dollars suddenly went missing. Nix’s former lawyer Pete Halat, who later became mayor of Biloxi, blamed the missing money on his former law firm partner Vincent Sherry, who was then a judge of the Second Mississippi District Circuit Court.

After the mob apparently ordered a hit on the judge, Sherry and his wife were murdered in their Mississippi home in 1987. Nix and later Halat were both convicted in the conspiracy that led to the judge’s death. Halat was released from prison in 2012, while Nix continues serving a life sentence.

Since then, very little has been heard about the Cornbread Cosa Nostra. But did the Dixie Mafia’s grip on the American South really end in the 1990s? “We certainly hope this deals them a major blow,” said one attorney at the time. “But I don’t have any illusions that this is the end of the Dixie Mafia.”

After reading about the Dixie Mafia, meet Joe Valachi, the first mobster to expose the Mafia’s darkest secrets, and Frank Lucas, the real-life heroin kingpin who inspired the film ‘American Gangster.’