The Mysterious Case Of Dorothy Arnold, The Wealthy Socialite Who Vanished In Plain Sight 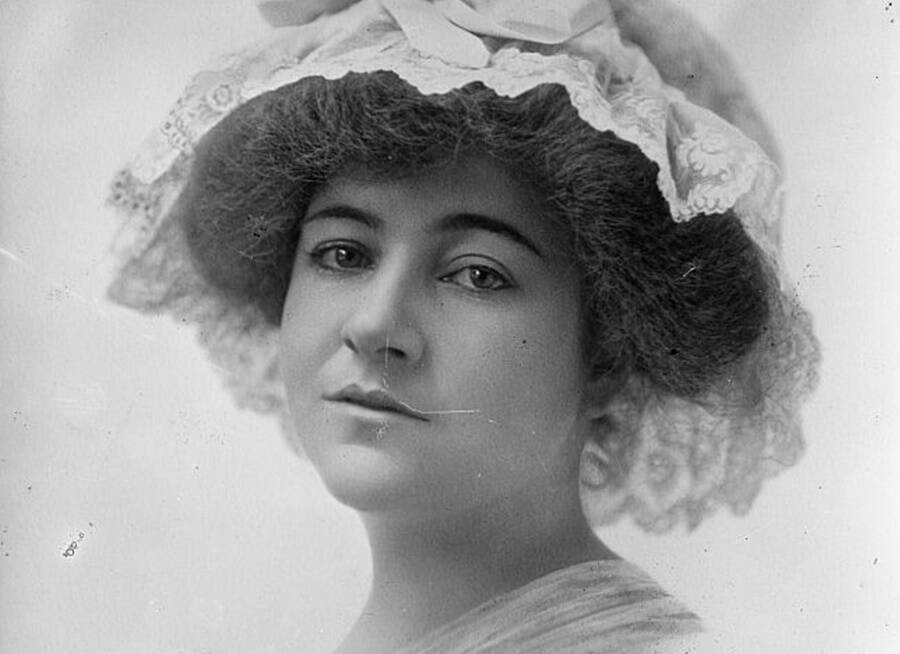 Shortly before Christmas 1910, the heiress to a perfume empire Dorothy Arnold vanished without a trace while shopping for an evening dress at a New York City department store.

Her maddening disappearance sent New York City into a tailspin of speculation, but her family’s extreme secrecy in handling the case was perhaps even more peculiar to onlookers. The Arnolds were reluctant to cooperate with police, which led them to clash with investigators and spawned a plethora of conspiracy theories.

Some speculated that Dorothy Arnold’s older, less prestigious boyfriend had ordered a hit on her after she refused his hand in marriage. Others whispered that she was the victim of a botched abortion. Or perhaps her family already found her and simply kept her in hiding due to shame.

To this day, the disappearance of Dorothy Arnold remains unsolved. 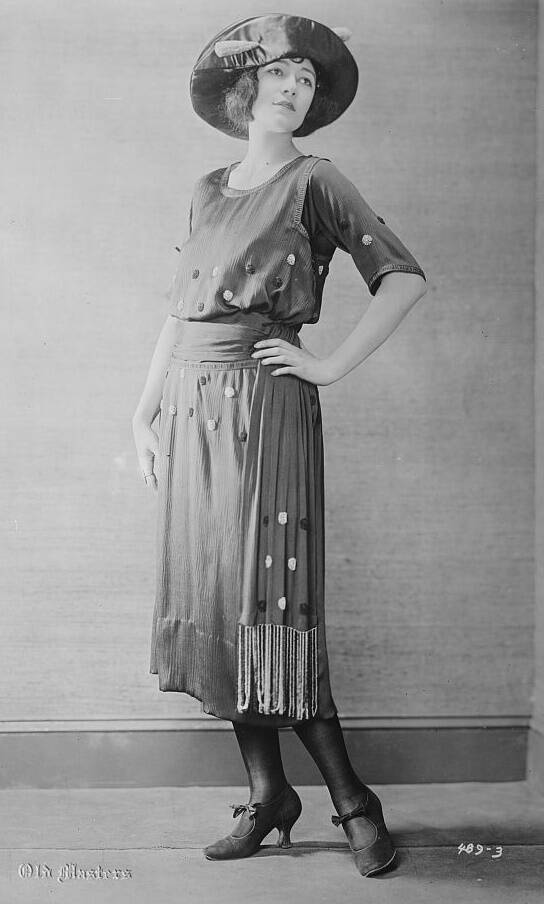 Library of CongressDorothy Arnold was an aspiring writer but her work was never published.

Before her mysterious disappearance, Dorothy Arnold lived a charmed life. She was born in 1885 in New York City as the second of four children to Mary Parks Arnold and Francis R. Arnold, a rich perfume importer.

Arnold’s uncle was the former U.S. Supreme Court Justice Rufus W. Peckham, and the Arnolds were generally regarded as “high-society” as one could get. They were on par with the Rothschilds, the Rockefellers, and the Zwirners of today, and their name was prominently featured in the Social Register, a publication whose origins date back to the 1880s and is considered the definitive guide to New York City’s richest families.

After graduating from Bryn Mawr College in Pennsylvania, Arnold began to pursue her ambitions to become a writer, though she was unsuccessful in getting anything published. Outside of work, Arnold mingled and garnered a reputation as a prestigious “society girl.”

On that fateful day, she left her family home in New York City by herself dressed in proper attire including a blue tailor-made suit, a black velvet hat, and lapis lazuli matching hatpin and earrings. She also had on a long blue coat and carried a black fox muff.

Arnold told her mother that she was headed out to buy an evening gown at a department store on Fifth Avenue. But based on police investigations, the heiress made a couple of detours along the way. 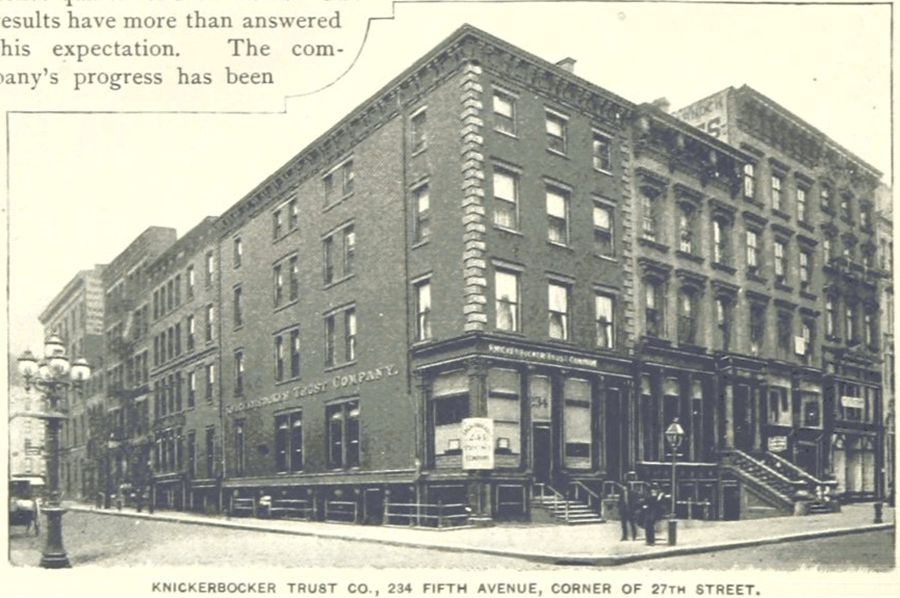 Wikimedia CommonsThe intersection on Fifth Avenue where the heiress was reportedly last seen.

She was seen purchasing candy at Park and Tilford on 59th Street and a humor book titled An Engaged Girl’s Sketches at Brentano’s. Her friend, Gladys King, bumped into Arnold as she was leaving a nearby book shop. That was the last time Dorothy Arnold was ever seen alive.

As nighttime fell and she failed to return home, Arnold’s family became worried. They began inquiring about her whereabouts among family friends. But strangely, after one friend called the family back asking if she had been found, the Arnolds lied and replied that yes, their daughter had safely returned home.

The next day, though, the Arnolds reached out to John Keith, a family friend, and attorney, for advice. Fearing that her disappearance would become a media spectacle and a source of shame for the family, the Arnolds didn’t report their daughter’s disappearance until six weeks after the last time she was seen alive.

But no matter how hard they wanted to keep her disappearance a secret, the truth eventually came out.

The Bizarre Investigation Into The Disappearance Of Dorothy Arnold 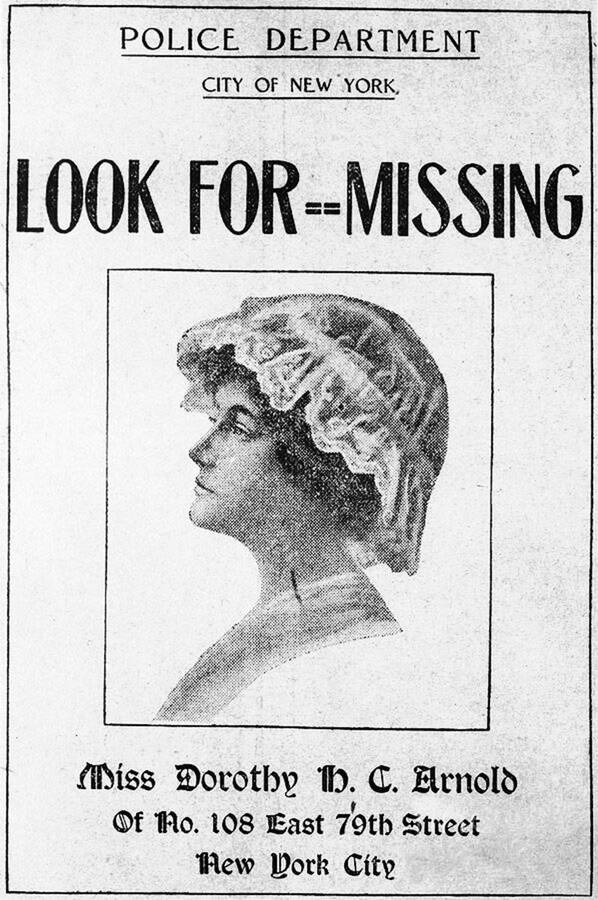 Even before alerting police, Dorothy Arnold’s family began to conduct investigations of their own. They hired private investigators, the notorious Pinkertons, who searched everywhere for the heiress: shops, hospitals, friends’ homes, and even the morgue.

When they searched her room for clues, they found “friendly” letters written by George C. Griscom Jr., a 42-year-old engineer who lived with his parents in Pittsburgh, Pennsylvania. The discovery of these letters revealed that Arnold and Griscom were in regular communication before she vanished, a communication she continued over her parents’ objections.

The pair had met when Arnold was still at Bryn Mawr, and Arnold once even lied about visiting an old college friend to meet with Griscom in secret. But her lie was uncovered when the family realized she’d pawned some jewelry to spend a week with Griscom at a Boston-area hotel.

The Edwardsville IntelligencerAn artist’s sketch of Dorothy Arnold on the day of her disappearance.

On Jan. 26, 1911, six weeks after she disappeared, Dorothy Arnold’s family made her case public. Despite the New York Police Department’s belief that Dorothy Arnold was still alive, her father filed an affidavit stating his belief that she was murdered.

“I am firmly convinced my daughter has been killed,” he said. “And I will spend every dollar I have in the world to avenge her death.”

He even told the press that he believed his daughter was murdered in Central Park, and that her body was thrown in the Central Park Reservoir.

This theory was immediately dismissed by police because it was 21 degrees Fahrenheit in New York City on the day Dorothy Arnold disappeared, which meant that the reservoir was frozen solid. When the reservoir subsequently thawed, police went searching for Arnold’s body and came up empty-handed. 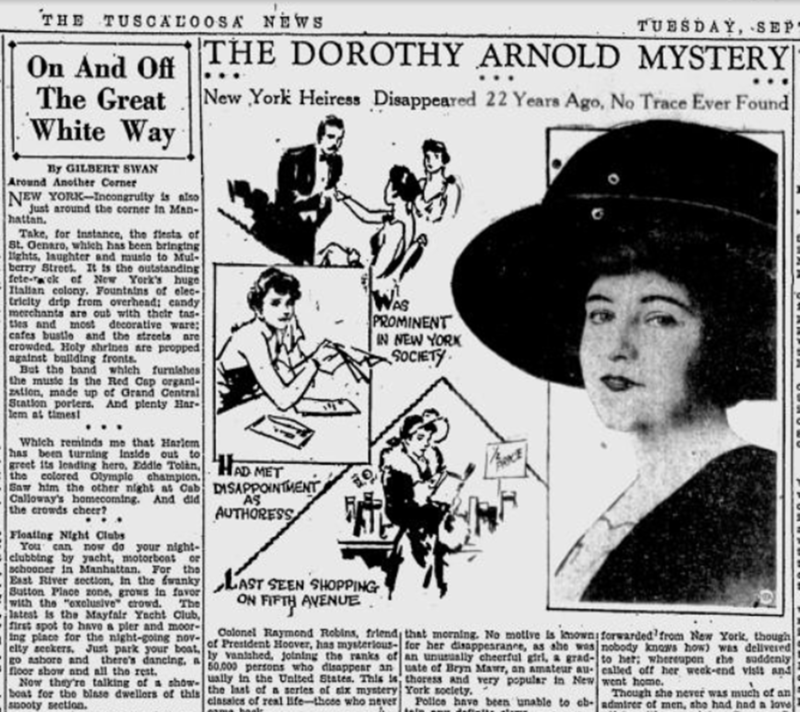 Since Dorothy Arnold’s disappearance, reported sightings of the heiress cropped up nearly every year afterward and many imposters claimed to be her in a bid to attain her fortune.

Conspiracies around what actually happened to Dorothy Arnold spread like wildfire. One theory suggested that the heiress had either run away or committed suicide after becoming bereft from receiving constant rejections from publishers.

Another theory suggested that she had become pregnant — possibly with Griscom’s child — and died during an underground abortion. This theory was supported by a doctor who ran an underground women’s clinic known as the “House.” He claimed to have performed a procedure on Dorothy Arnold and that a surgical complication had caused her death.

There were also suspicions of murder. Six years after her disappearance, an inmate at the Rhode Island State Penitentiary named Edward Glennorris claimed he helped bury a body that matched Dorothy Arnold’s description. Some suspected the man had been hired by Griscom, but when investigators searched the attic where Glenmorris said her body had been kept they found nothing.

By April 1921, Arnold’s parents had spent over $100,000 to find her and the case officially went cold. But then that same year, a shocking statement came out of the police department: the case had been solved.

“All that I can say is that it has been solved by the department,” Police Captain John H. Ayers, the head of the Missing Persons Bureau, told the press. “Dorothy Arnold is no longer listed as a missing person.”

Captain Ayers gave no more details but added, “Her parents, relatives, and friends, who had been led to follow in all directions clues sent in multitudes of letters, suddenly ceased their activity.”

A lawyer for the family denied the case had been cracked, stating that “Captain Ayers seems to intimate that the mystery of Dorothy Arnold’s disappearance has been solved and that the family for some reason has kept the solution a secret… the whole thing is a damned lie.”

The conflict between the police and her family over the case fueled even more speculation around her disappearance. But the mystery was never truly solved.

Sadly, the story of Dorothy Arnold’s disappearance remains one of the biggest and perhaps most tragic mysteries in New York City’s history.

Now that you’ve uncovered the bizarre investigation into the disappearance of Dorothy Arnold, learn about the odd 11-day saga of crime novelist Agatha Christie’s disappearance. Then, dive into the secret life of Roald Dahl, a fighter pilot and spy who became a beloved children’s author.