The Fascinating History Of The Drinking Horn, The Thirst-Quenching Vessel Of Viking Legend

Though it's most often associated with the Vikings, the drinking horn has a long history that actually started more than 1,000 years before the vicious warriors ever left Scandinavia.

When most people think of a drinking horn, they picture Vikings dressed in fur clothing and battle helmets guzzling mead after a day of raiding villages. While the Norsemen did use drinking horns, the history of the vessel is far more varied — and begins over 1,000 years prior to the Viking Age.

Known as the keras or rhyton in ancient Greece, the drinking horn was used in many regions over the years, and it’s still an important part of some cultures to this day. From the Scythians to modern-day Georgians, the people who utilized the vessel were as varied as the areas in which examples have been found. 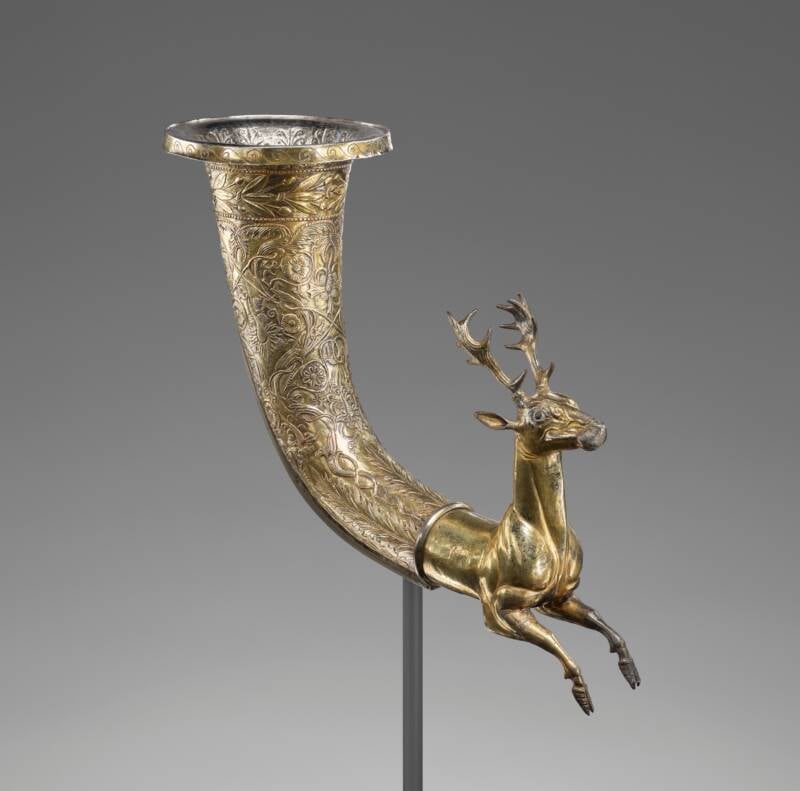 And though the earliest specimens were indeed crafted from actual horns of bulls or rams, the materials used to make them varied greatly as well. Even the type of container ranged from those designed for daily use to decorative or ceremonial vessels.

So while the Viking drinking horn may be the first to come to mind, the actual history of the accessory is far more diverse.

The History Of The Drinking Horn, From The Scythians To The Greeks

Some of the first known cultures to use the drinking horn were the Thracians and the Scythians. While the Scythians lived in what is now Kazakhstan and southern Siberia, the Thracians resided in the modern-day Balkans. Both began using hollowed-out horns from goats, rams, and bulls to drink their various libations.

An ancient account from the Greek historian Xenophon of the Thracian leader Seuthes around the fourth century B.C.E. suggests that the horn was part and parcel of the Thracian way of life. The words Xenophon used to describe its use were “kata ton Thrakion nomon” or “after the Thracian fashion.” 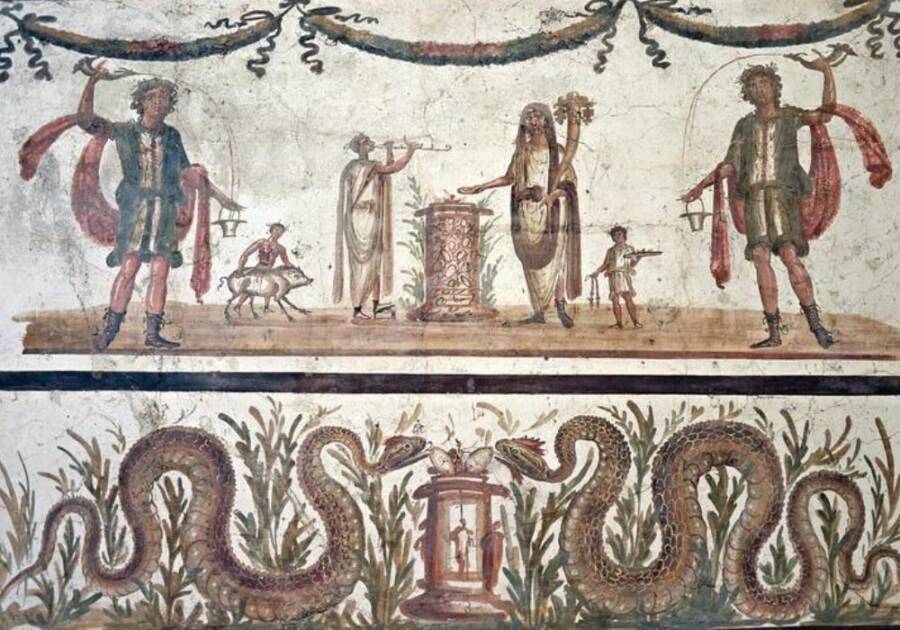 “Seuthes directed Xenophon to come in, with any two men he might choose to bring with him. As soon as they were inside, they first greeted one another and drank healths after the Thracian fashion in horns of wine,” Xenophon wrote in his work Anabasis.

Meanwhile, drinking horns have been found in Scythian graves dating as early as the seventh century B.C.E., many of them crafted from the horns of the now-extinct aurochs. And in the fifth century B.C.E., the ancient culture began burying vessels fitted with precious metals with their warriors.

Romans began using their own version of the drinking horn around the same time. Rather than the more primitive animal horns or the metal vessels adorned with the carved heads of animals that the Greeks preferred, the Romans made their version out of beautiful, decorative glass, according to The Vintage News.

The Rise Of The Viking Drinking Horn

While the Vikings weren’t the only people to use the drinking horn, their version is the most well-known. It was even enshrined in their mythology. According to the Prose Edda, an Old Norse mythology textbook from the 13th century, Thor unknowingly drank from a horn that was full of all the seas of the Earth after a giant named Útgarða-Loki challenged him to.

“Then Thor became wroth, set the horn to his mouth and drank with all his might and kept on as long as he could, and when he looked into it its contents had indeed visibly diminished, but he gave back the horn and would not drink any more,” the legend reads.

The next morning, Útgarða-Loki said to him, “When you drank from the horn, and thought that it diminished so little, then, by my troth, it was a great wonder, which I never could have deemed possible. One end of the horn stood in the sea, but that you did not see. When you come to the sea−shore you will discover how much the sea has sunk by your drinking; that is now called the ebb.”

Thus, in Viking legend, Thor and his drinking horn were the cause of the ocean tides.

It wasn’t uncommon, then, for Vikings to drink mead and beer out of horns, according to the Norse Tradesman. What’s more, these horns were often carved with various decorations and runes and passed down through the generations. 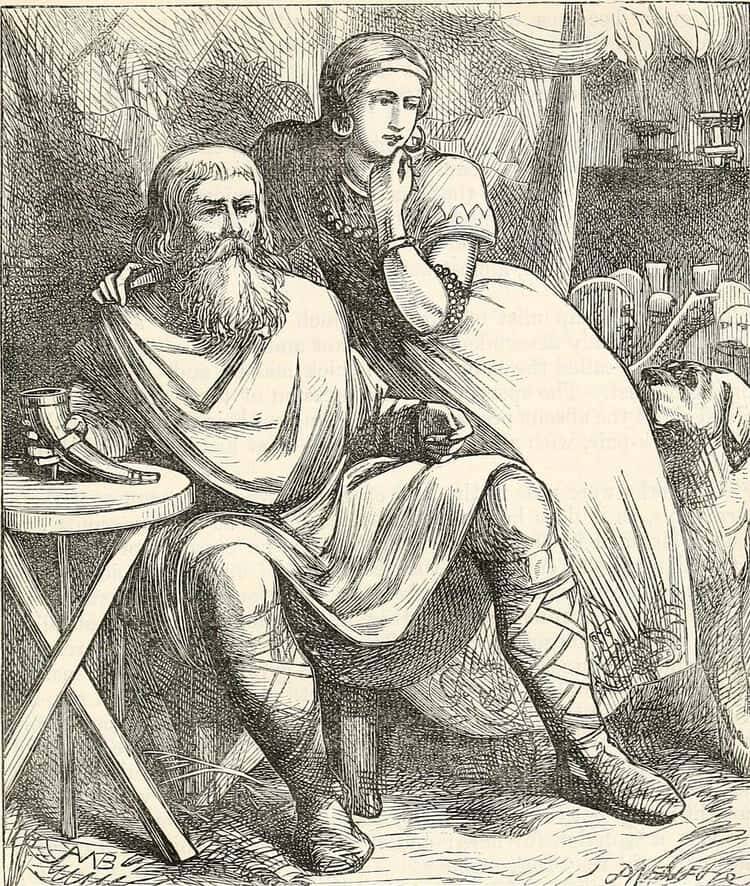 Wikimedia CommonsA 19th-century illustration of a Viking couple from Hans Christian Andersen’s Stories for the Household.

Norse legend even says that when fallen Viking warriors entered Valhalla, a valkyrie would greet them with a drinking horn to take with them into Odin’s hall, where they drank, feasted, and fought to the death — only to be resurrected and do it all over again the next night.

The Legacy Of This Viking Drinking Vessel To This Day

Though it originated in antiquity, the drinking horn didn’t remain in the past. In the 19th and 20th centuries, lavish vessels made of ivory, gold, and porcelain emerged as decorative luxuries in Austria and Germany.

Even today, people in the country of Georgia use vessels called khantsi for ritual toasting. According to Atlas Obscura, a highly-polished goat or ram horn decorated with silver cuffing and a chain is used during the formal dinner feast called a supra. Whoever toasts with the horn must drink its entire contents, and they cannot set it down until it’s empty,

With such a diverse history, it’s clear that the Viking drinking horn is so much more than that. A storied item found in countless cultures throughout the centuries, the intoxicating vessel can still be seen today in museums and at dinner tables around the world.

Now that you’ve read the true story of the drinking horn, discover 32 more facts about the Vikings. Then, learn about six fascinating drinking rituals from around the world.