Police say that Emily Noble was brutally beaten and strangled to death, and that Matheau Moore staged her murder scene to make it look like she had died by suicide. 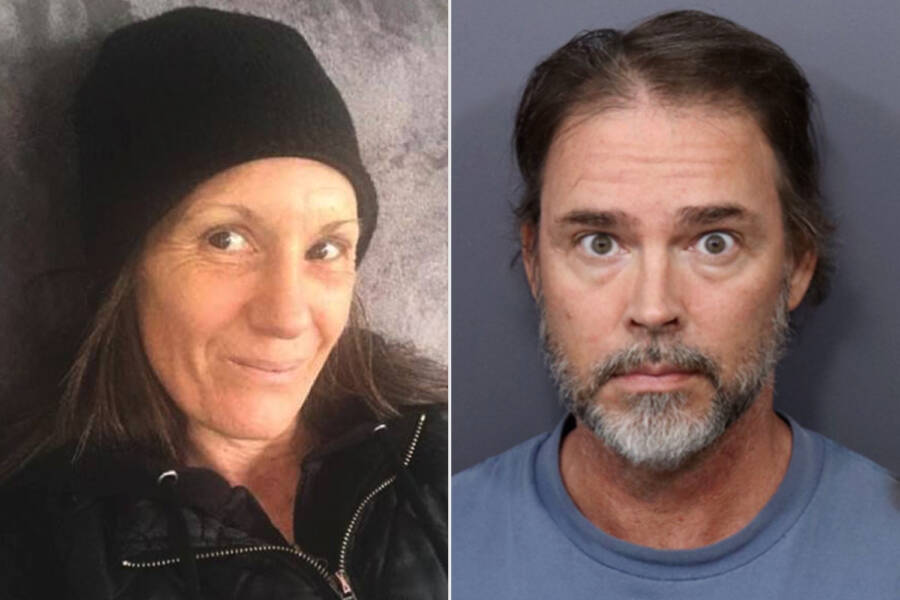 On May 25, 2020, Matheau Moore reported his wife, Emily Noble, missing. But now, months after detailing that traumatizing incident on a podcast that showcases missing persons cases, he has been charged with her murder.

“This has been a very, very long journey for all of us involved in this investigation,” said Westerville Police Department Lieutenant Justin Alloway.

“It took a lot of time and effort of different people. It was frustrating for the family and friends of Emily, and frustrating for us at times, as how long everything took.”

Emily Noble was found in the woods not far from the couple’s home on Sept. 16, 2020. Detectives were forced to rely on dental records to identify her, as she was badly decomposed after months of exposure to the elements.

A strangulation expert was still able to find the face and neck fractures indicative of homicide. The scene itself, meanwhile, had been crudely staged to make Noble’s death look like a suicide by hanging. 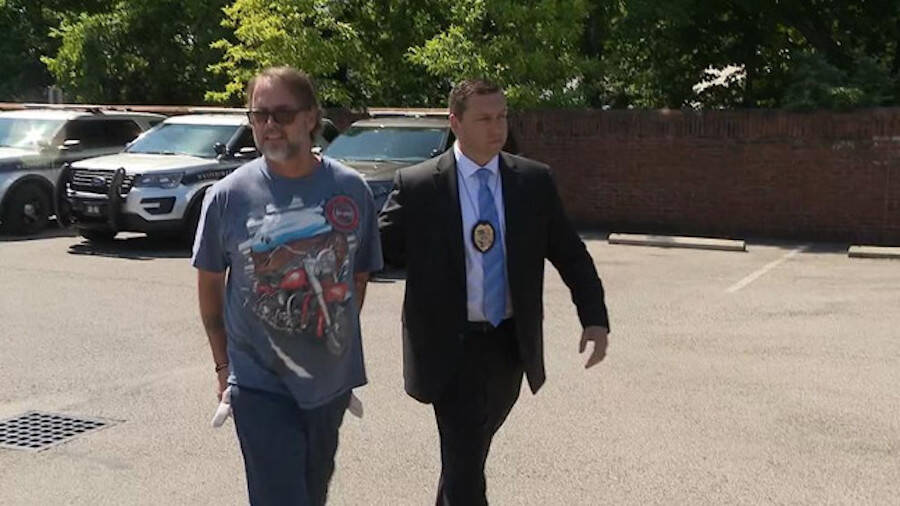 “He said this was clearly a homicide based on the injuries that were sustained and the mechanism of those injuries. He also gave his opinion that her body was staged to appears as though it was suicide and, in his opinion, that was absolutely not the case.”

Emily Noble and Matheau Moore married in 2018, and on the night of the murder, they were out celebrating Noble’s 52nd birthday. Security cameras caught them entering a restaurant for dinner before hitting two nearby bars for drinks after that, leaving around 7:30 p.m.

Then, police say, Moore killed her. And almost as soon as he had, he tried hard to curate the image of a worried husband. In the morning, Moore first phoned a friend to ask if they had seen her.

And in June, he pleaded with producers of The Vanished Podcast to feature Emily Noble’s story. They did in an episode that aired in September 2020. What followed was one of the most bizarre interviews the producers had ever encountered. 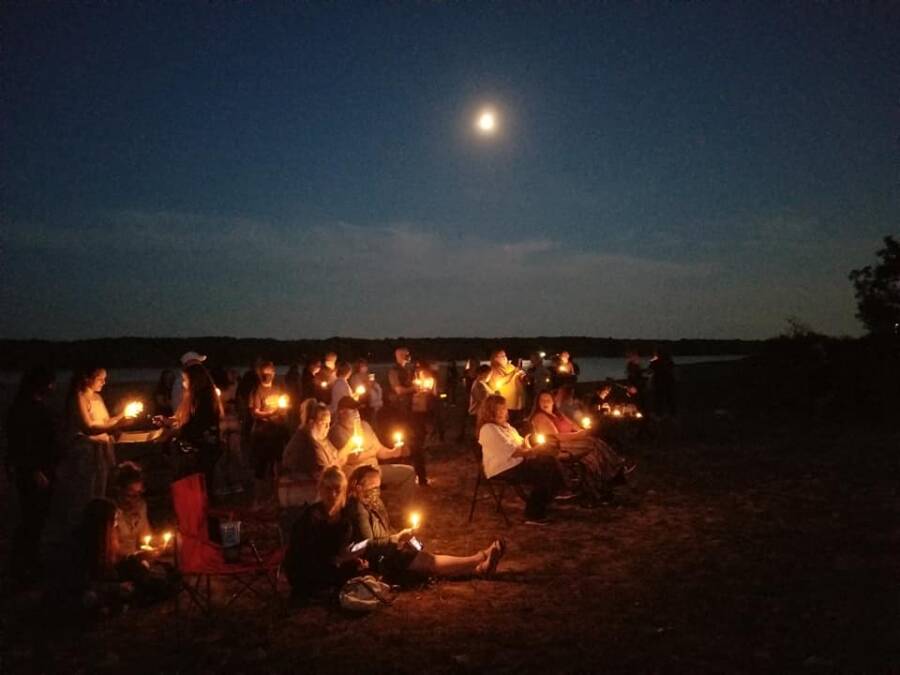 FacebookA candlelight vigil for Noble was held in September.

When asked to describe Emily Noble during the podcast, Moore said, “I never saw her get on the scale. She’s very small, like 100 pounds… Pretty legs, great arms.”

“My internal immediate reaction was ‘Oh my gosh,'” said Coleman.

“She was very, very, very thin,” Moore continued. “Not, like, druggie thin.”

He kept going: “Like, she’s not smiling. She’ll have a look on her face that’s very, like, there’s something wrong. It’s just how she is.”

Furthermore, Moore’s narrative of events seemed odd to those who knew him and Emily Noble. 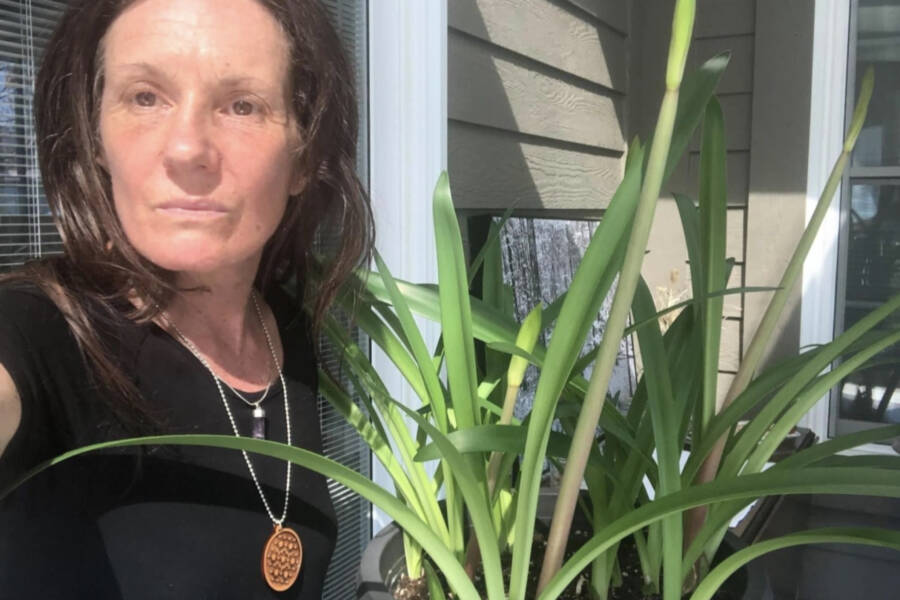 GoFundMeA GoFundMe campaign for Noble raised $1,000 before her body was found.

Moore claimed he and Noble had gone to bed, but that he had woken up in the middle of the night to use the restroom and then decided to sleep in a guest room in order not to wake her. He said he only noticed her missing around 10 a.m. the following morning.

“It wasn’t just — it was crazy,” Moore’s friend Jeff told The Vanished Podcast. “The fact that she went missing and there was no one that saw her leaving, the fact that Matt couldn’t even say that he saw her leave cause in the middle of the night he went to the bathroom and didn’t want to go back to bed, because he didn’t want to wake her up.”

“I’ve lived with women. When I go to the bathroom, I come back to bed, because I know even if they wake up, they go right back to sleep. That’s the most ridiculous thing I’ve ever heard.”

“He said maybe she went off with the Amish people, maybe she was kidnapped,” said Sue Kelly, Moore’s neighbor. “He kept throwing out these crazy scenarios.”

Ultimately, authorities made sure to have enough evidence of Moore’s guilt to arrest and charge him with two counts of murder and one count of felonious assault. He was detained in front of his condo following a traffic stop and immediately denied having killed his wife.

“They’re making a mistake,” he yelled. “This is a mistake. I am innocent.”

Moore pleaded not guilty and remains in custody on a $2.5 million bond.

After reading about the husband charged with his wife’s murder after appearing on a podcast asking for help, learn about Dalia Dippolito and her murder-for-hire plot gone wrong. Then, read the chilling case of Stephen McDaniel, who was interviewed as a witness about a murder that he committed.