Emma Walker, The High School Cheerleader Who Was Murdered By Her Ex While She Was Asleep In Her Bed

After 16-year-old Emma Walker broke up with her boyfriend Riley Gaul, he eventually grew enraged enough to kill her — then posted a message on Twitter to cover his tracks.

In 2016, 16-year-old Emma Walker seemed to be living her teenage dream. She was a cheerleader at Central High School in Knoxville, Tennessee, she was surrounded by loving friends, and she was even dating a boy on the football team. But that fall, everything came crashing down when she broke up with 18-year-old Riley Gaul — and he killed her because of it. 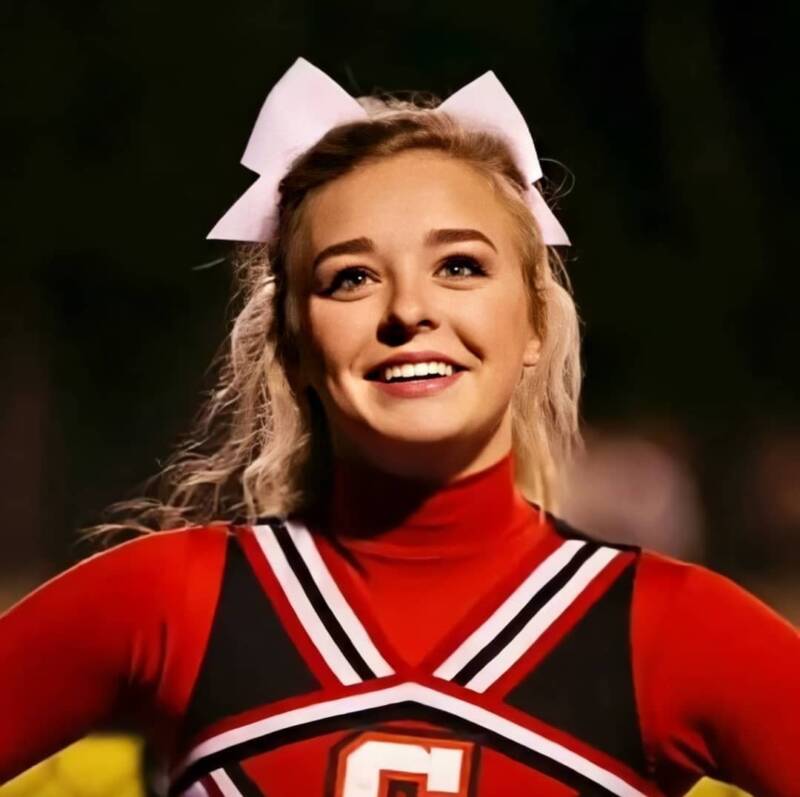 Facebook/In Loving Memory of Emma WalkerEmma Walker was just 16 years old when she was murdered by her ex-boyfriend, Riley Gaul, in November 2016.

Gaul and Walker had started dating two years prior when Gaul was a junior and Walker was a freshman. As their relationship progressed, however, Walker’s friends and family noticed that Gaul was becoming more controlling.

Not long after Gaul started college in 2016, Walker decided to end their relationship — but Gaul didn’t take it well. He took drastic measures to get Walker’s attention, including faking his own kidnapping.

Then, in the early morning hours of Nov. 21, 2016, Gaul crept up outside of Walker’s house and fired two shots through the wall of her bedroom. Her mother found her dead the next morning, and she immediately told investigators that she suspected Gaul. However, it wasn’t until two of Gaul’s friends helped the police carry out a sting operation that the unhinged ex-boyfriend was brought to justice.

Riley Gaul, a wide receiver on the Central High School football team, first caught Emma Walker’s eye when she started cheering during her freshman year. According to ABC News, he wasn’t a “classic jock” but a funny, intelligent young man who loved playing video games and had a “nerdy” side. 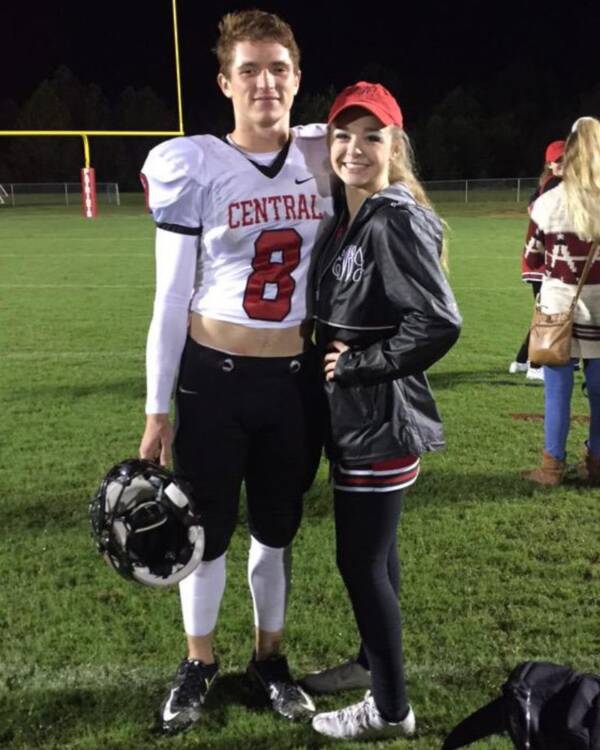 Twitter/Emma WalkerRiley Gaul was a wide receiver on the Central High School football team, while Emma Walker was a cheerleader.

Mark and Jill Walker, Emma’s parents, thought he was a great fit for their daughter at first. Jill said he was “very likable,” and Mark recalled that “he was a very nice looking young man, well-mannered.”

But Walker’s friends and family soon began to realize that Gaul had a controlling side. Lauren Hutton, one of Walker’s classmates, said, “He got more possessive and more clingy toward her and wouldn’t let her do certain things.”

Over the two years they dated, Gaul and Walker frequently broke up and got back together, often having “really dramatic” fights. At one point, Gaul sent her Snapchat messages that read, “I hate you I hate everything about you” and “you’re dead to me… I’ll check the obituary… f— you.”

When Walker’s parents saw these messages, they immediately banned Gaul from their home and took their daughter’s cell phone away, but Gaul gave her an iPod Touch so they could still stay in contact. 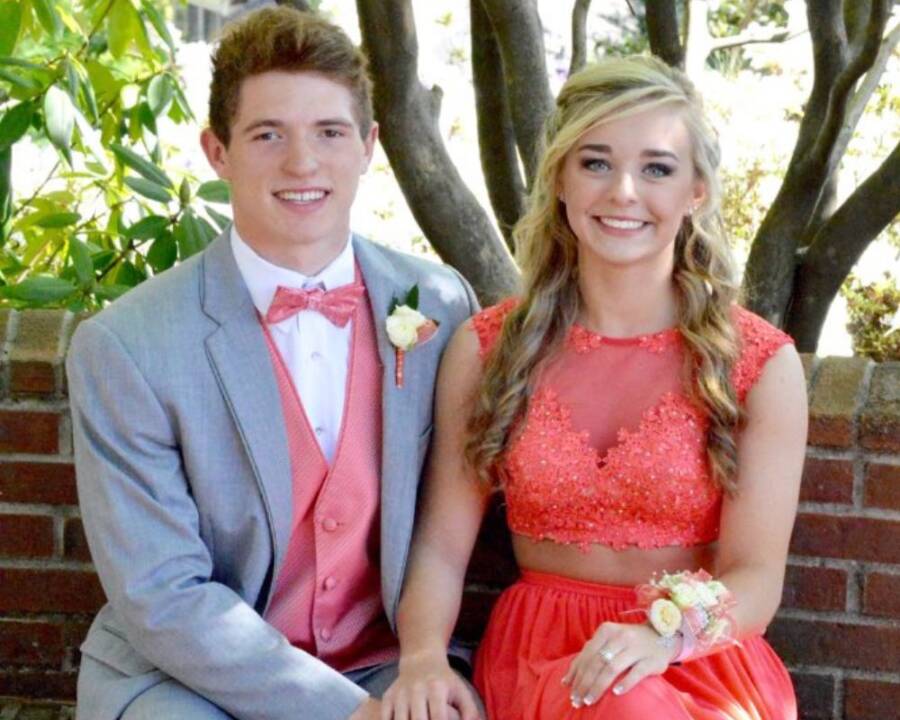 Twitter/Emma WalkerRiley Gaul and Emma Walker before prom in April 2016, just seven months before her murder.

Finally, around Halloween of 2016, Walker ended things with Gaul for good. Mark Walker noted, “She did become like her old self again. She would come out of her room, eat dinner with us, and socialize with us.”

Tragically, Emma Walker would only be able to enjoy her newfound freedom for a few short weeks before Gaul snatched it from her forever.

On Nov. 18, 2016, just a few weeks after breaking up with Gaul, Emma Walker attended a party at her friend’s house. According to the Knoxville News Sentinel, around 11:30 p.m. she received a text message from an anonymous number that read, “Go to your car with your keys. Go alone… I’ve got someone you love. If you don’t comply I will hurt them.”

Walker suspected the texts were from her ex, so she and a group of her friends walked outside — and found Riley Gaul lying facedown in a ditch. He claimed he’d been kidnapped and couldn’t remember anything because his captives had hit him in the head, but Walker didn’t believe him and walked away.

The very next day, Walker saw an eerie stranger dressed in black outside her house. ABC News reports that she texted her friends, “I’m home alone and somebody in all black walked down my street and came to my door and rang the doorbell over and over again. I thought I was going to die.” 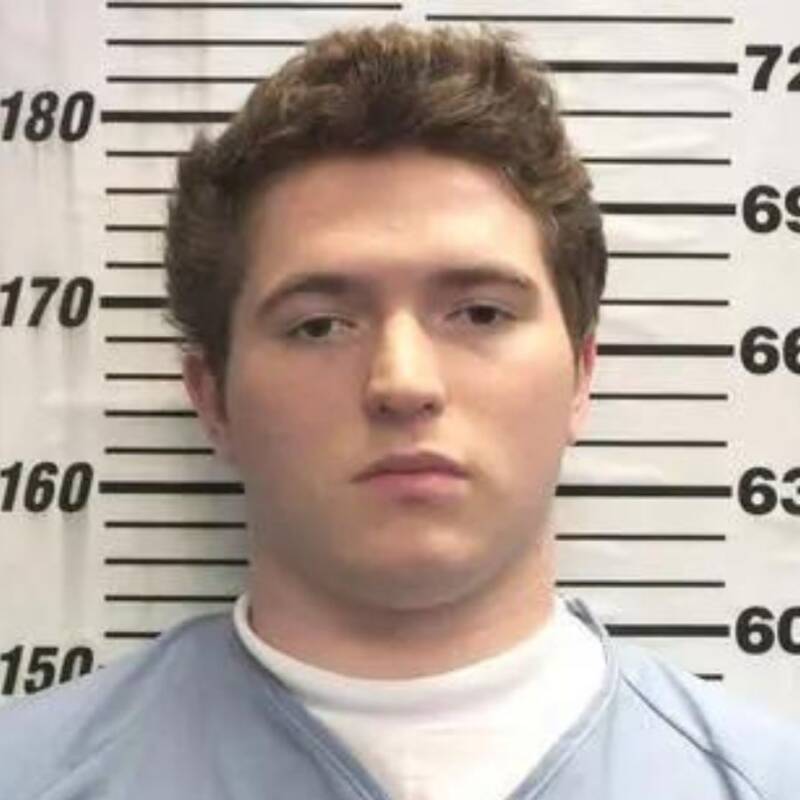 Public DomainRiley Gaul is currently serving a life sentence for the murder of Emma Walker.

Terrified, she reached out to the only person she could think of at the moment — Riley Gaul. She told him, “I hate you but I need you right now,” and he replied, “I’m coming… I’m speeding just give me a minute.”

When Walker’s mother arrived home shortly thereafter and saw her daughter outside with Gaul, she was livid. She asked him to leave and told Walker that the stranger in black had probably been Gaul all along.

The next day, Sunday, Nov. 20, Walker’s parents followed her to work and back home to ensure that she was safe. Around 12 a.m., she went to bed — and that was the last time they saw her alive.

Emma Walker’s Death And The Startling Investigation That Followed

At 6 a.m. on Monday, Nov. 21, 2016, Jill Walker went into her daughter’s room to wake her up for school and found her unresponsive.

She immediately called the police, who rushed to the home to investigate. At first, they believed Walker may have taken her own life, but then they spotted a strange hole in her bedroom wall.

Knox County Sheriff’s Deputy Nikki Bules recalled to ABC News, “There was a hole in the wall… It appeared to be a bullet hole. At that point, I knew that it probably was not a suicide.”

Further investigation revealed a second hole in the wall and two bullet casings in the yard outside. There was just a small amount of blood on Walker’s pillow, but it was clear that she’d been fatally shot behind her left ear.

Another officer on the case, Lieutenant Allen Merritt, started interviewing friends and family members — and noted that the same name came up over and over again. “Everybody kept giving us the name Riley Gaul because of their relationship, because they had seen the way that Riley had treated her, the way he’d talked to her,” Merritt said.

Meanwhile, Gaul was busy crafting posts on Facebook and Twitter about Walker’s death. “Rest easy now sweetheart,” he wrote in one tweet. “I love you forever and always.” 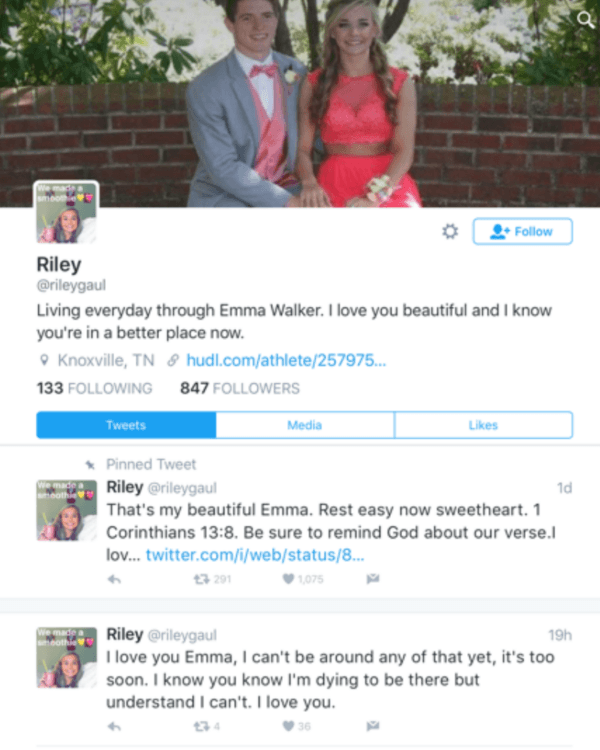 Despite Gaul’s mournful messages, investigators quickly brought him in for questioning about Emma Walker’s death. Detective James Hurst told ABC News, “When I first met him, I thought he might’ve been a grieving boyfriend. When we got into the interview room and sat down, I felt like there was a dark side. He didn’t have a whole lot of passion or concern.”

Gaul told police that Walker had blocked his number the night of her death after they had yet another argument over the phone, and he’d cried in his car for two or three hours before going to bed. The whole time, however, he never referred to Emma Walker by her name, referring to her only as “the girl.”

Although the interview was suspicious, police had no solid evidence they could use to charge Gaul with Walker’s murder — until two of his close friends came forward to help.

Riley Gaul Comes Under Scrutiny And Goes On Trial

Two of Riley Gaul’s friends from college, Alex McCarty and Noah Walton, quickly told investigators that Gaul had displayed some concerning actions since his breakup with Walker.

Soon after the relationship ended, Gaul had taken a handful of Vicodin and washed it down with alcohol in an apparent suicide attempt.

On Saturday, Nov. 19 — the day after Gaul’s supposed kidnapping — he’d told McCarty that he’d stolen his grandfather’s gun in order to protect himself. He then asked Walton how to get fingerprints off of a gun, and he eventually asked both of his friends to help him dispose of the weapon.

According to Oxygen, Gaul swore to his friends that he hadn’t killed Walker, but he wanted to toss the gun into the Tennessee River because he was worried the police would unfairly connect him to the crime if they learned he had it. 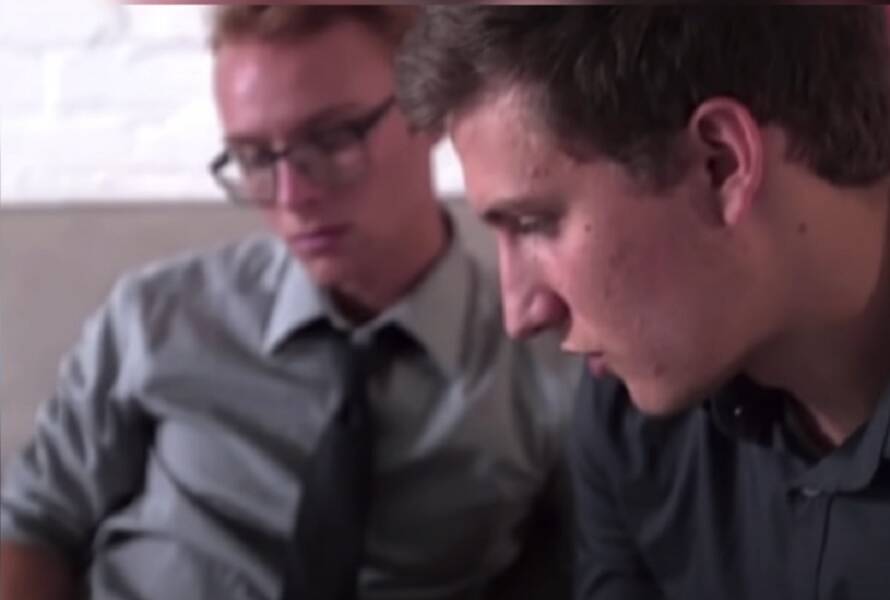 Truly Criminal/YouTubeAlex McCarty and Noah Watson agreed to participate in a sting operation to discover the truth about Emma Walker’s death.

Suspicious of Gaul’s true motives, McCarty and Walton teamed up with investigators to reveal the truth. They were fitted with cameras and microphones as they accompanied Gaul to dump the gun that he’d used to kill Walker.

Thanks to McCarty and Walton, the police swooped in just in time to find Gaul in possession of the murder weapon, gloves, and black clothing — the same kind Walker had seen the stranger outside her house wearing.

At his trial, Riley Gaul was found guilty of first-degree murder, stalking, theft, reckless endangerment, and possession of a firearm during a felony, earning him an automatic life sentence. To the end, though, he maintained that he never meant to harm Emma Walker.

“I wanted to scare her,” Gaul told Walker’s family at his sentencing hearing. “I never meant to take Emma’s life.”

After reading about the death of Emma Walker, go inside the full story of Adnan Syed, the high school student who was charged with the murder of his girlfriend Hae Min Lee. Then, learn about the infamous murder of Travis Alexander at the hands of his ex-girlfriend Jodi Arias.