In 1938, a judge, a rabbi, and a Jewish gangster got together and came up with a plan to beat up America’s Nazi sympathizers whenever and wherever they tried to march. 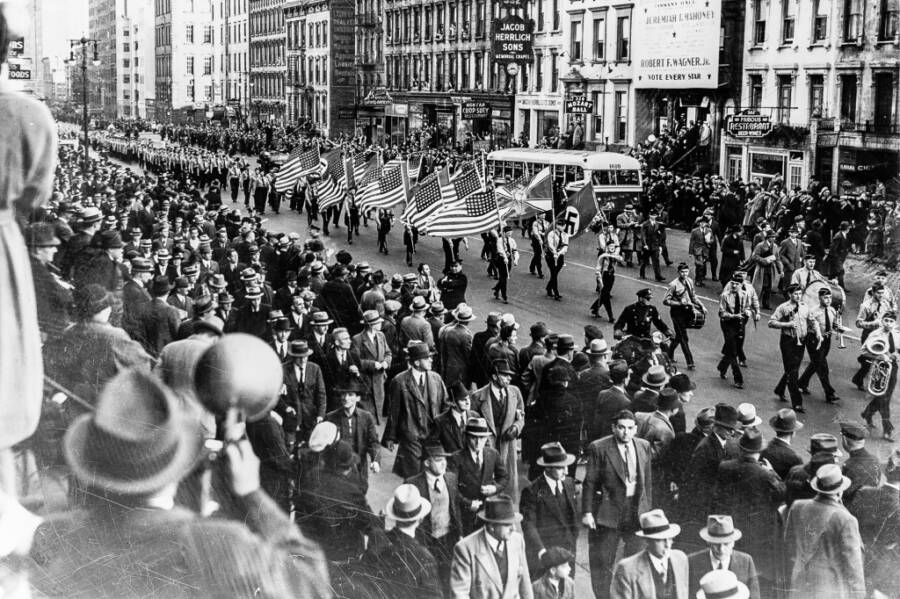 In 1938, American Nazis and their recruiting platform, the German American Bund, posed a very real threat to U.S. sovereignty. But a New York judge and some patriotic Jewish mobsters came on the scene to stop them. That year became the opening salvo in the fight between America’s Jewish mob and Nazis.

On April 20, 1938, the German American Bund goose-stepped its way towards the Yorkville Casino on Manhattan’s Upper East Side in honor of Hitler’s 49th birthday. Their leader, Fritz Kuhn, was due to speak in a ballroom decorated with swastikas and spread Jewish hate. On stage, he often imitated Hitler in full “Sieg Heil” spit mode.

However, little did Kuhn know that a group of Jewish mobsters, led by Meyer Lansky and secretly contracted by judge Nathan D. Perlman, were waiting. Armed with baseball bats and pool cues, Lansky’s crew had split up into three groups, covering every exit point. Then, when all members of the Bund were present, the gangsters attacked.

Within minutes, New York’s Jewish mob routed the Nazis. And although it was the first time that the mobsters disrupted an anti-American meeting of Nazis, it wouldn’t be the last.

The Insidious Rise Of Nazism In America

A rise of fascism took hold in America in the late 1930s, replicating Adolf Hitler’s rise to power in Germany. 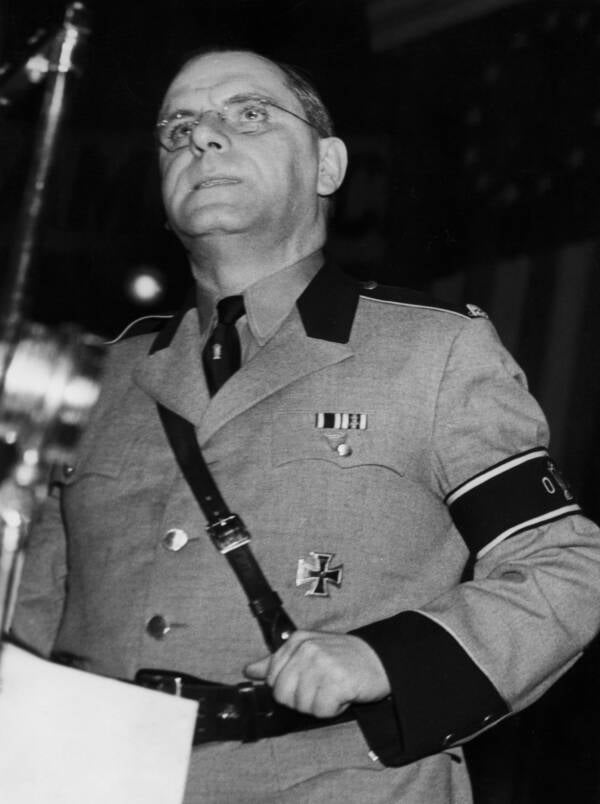 Keystone-France/Gamma-Rapho via Getty ImagesFritz Kuhn, the leader of the German American Bund at a rally at Madison Square Garden, February 20, 1939.

By 1938, America had the third highest German population in the world. The German American Bund, led by fascist Fritz Kuhn, took full advantage, holding regular gatherings and marches celebrating Hitler and the Third Reich. They pledged total allegiance to Germany.

Kuhn and the Bund espoused hate on the “Jewish problem.” He said that Jews were communists who supposedly held all the money in America. Hitler knew of the Bund’s existence and approved of it. He hoped to brainwash the country into supporting him rather than face Germany in war again.

The Bund presented itself as Germany-loving Americans. In reality, they goose-stepped, “Sieg-Heiled,” and spittled their antisemitic rhetoric across the U.S. And they were more or less free to do so because laws against hate speech didn’t exist yet in the 1930s.

Yorkville, in Upper Manhattan, had the highest congregation of Germans in New York, and East 86th Street was nicknamed “Sauerkraut Boulevard.” The Bund was brazen. They held massive rallies along the streets in brown-shirted swastika uniforms.

New York judge and former Congressman Nathan D. Perlman became concerned with the Bund’s growing presence in New York. He knew the Bund had freedoms of assembly and speech afforded them under the U.S. Constitution’s First Amendment.

As author Michael Benson recounts in his book, Gangsters Vs. Nazi’s: How Jewish Mobsters Battled Nazis in Wartime America, Perlman formulated a creative plan over a cocktail — fight fire with fire. 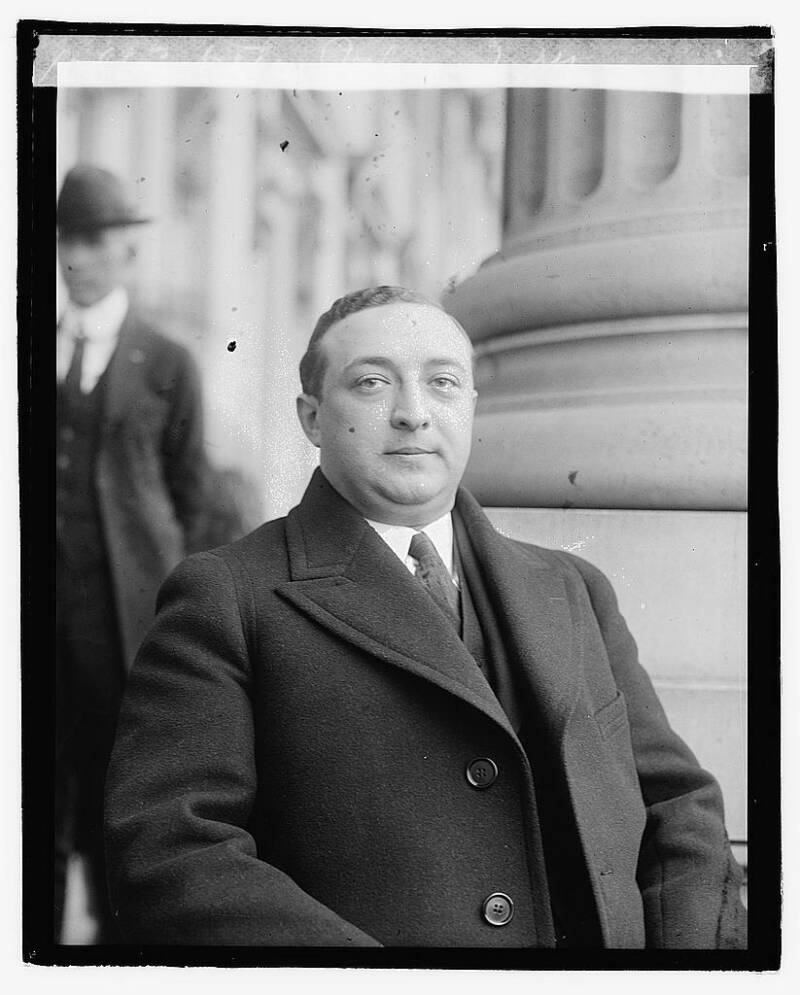 “What those Nazis need is a good ass-whipping,” Perlman said. And he knew just the man for the job: mobster Meyer Lansky. According to Benson, it’s still unclear exactly how Perlman knew Lansky, but it may have been outside the arena of the justice system. Perlman called Lansky and asked him point-blank, “You got some boys who might want to punch a Nazi?”

Meyer Lansky, the foremost Jewish racketeer and mob gambling czar, was highly respected across the underworld. He had a team of Jewish killers at his disposal, dubbed Murder Inc, a Brooklyn-based crew that served as the enforcement arm of the Italian and Jewish mobs. As Benson writes, Lansky’s reply to Perlman implied his power: “Respectfully, you understand we can do better than punch?”

In early 1938, Nathan D. Perlman, Meyer Lansky, and rabbi Stephen Wise met to discuss the plan. Lansky’s had one request for the rabbi: no negative press comments from Jewish community leaders. He agreed. Lansky had his Brownsville boys trained by boxers for maximum effect. The April 20 Bund march at Yorkville Casino awaited.

As Benson recounts, Perlman had offered Lansky compensation for the work, but Lansky refused. “I need no pay, Judge,” he said.

How The Jewish Mob Won The ‘Battle Of Yorkville’

Although far outnumbered by the more than 3,000 Nazis, the Jewish mobsters dished out their version of justice on April 20, 1938. The Bund presented the external illusion of strength through Nazi imagery, but they were cowardly inside. And they were no match for the Jewish gangsters’ fists and baseball bats.

Afterward, Lansky and his men made their escape, but not after dropping their weapons and the American Legion hats they had worn for subterfuge. In the bloody aftermath, many of the Nazi’s lay unconscious, others suffered compound fractures of the limbs, according to The New York Post. 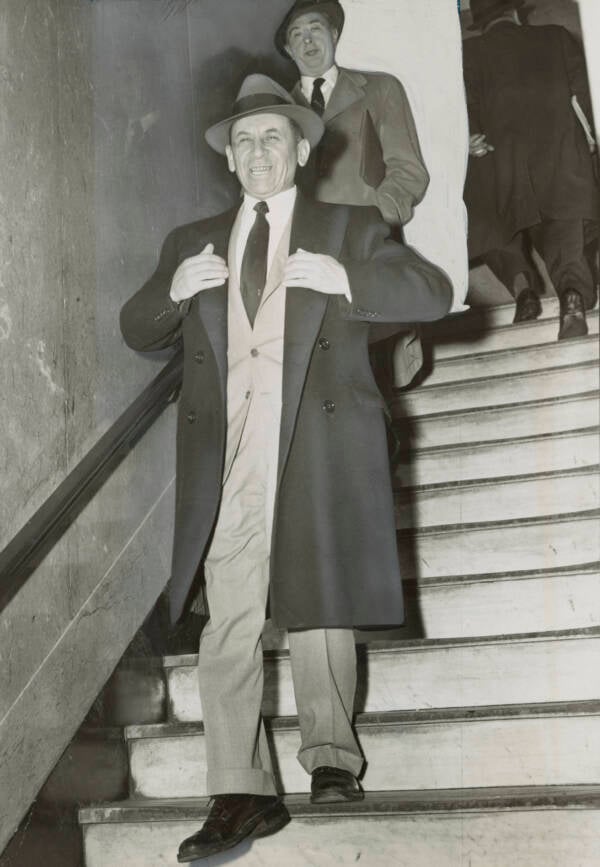 Buyenlarge/Getty ImagesMobster Meyer Lansky, who enlisted a dozen men to break up a pro-Nazi rally in New York.

The waves made by the “Battle of Yorkville” would ripple across America, starting a movement, pitting gangsters against Nazis. And the Bund was about to see how tough Jews could be elsewhere, too.

In cities with strong Jewish mob representation, the gangsters were only too pleased to receive Lansky’s and Perlman’s blessings.

Shortly after the Yorkville incident, New York City banned the Bund from wearing their uniforms in the city, so they hopped across the Hudson River to Newark, New Jersey. But there, Lansky had the “Al Capone of Newark,” Abner “Longie” Zwillman, waiting. Zwillman recruited an under-ground band of boxers dubbed the “Newark Minutemen” to take them on.

Zwillman chose former Jewish professional boxer Nat Arno, “The Fighting Hebrew,” as commander of the Minutemen. Their mission was to physically challenge the Bund at every meeting. The Minutemen soon numbered in the thousands, according to The Times of Israel. 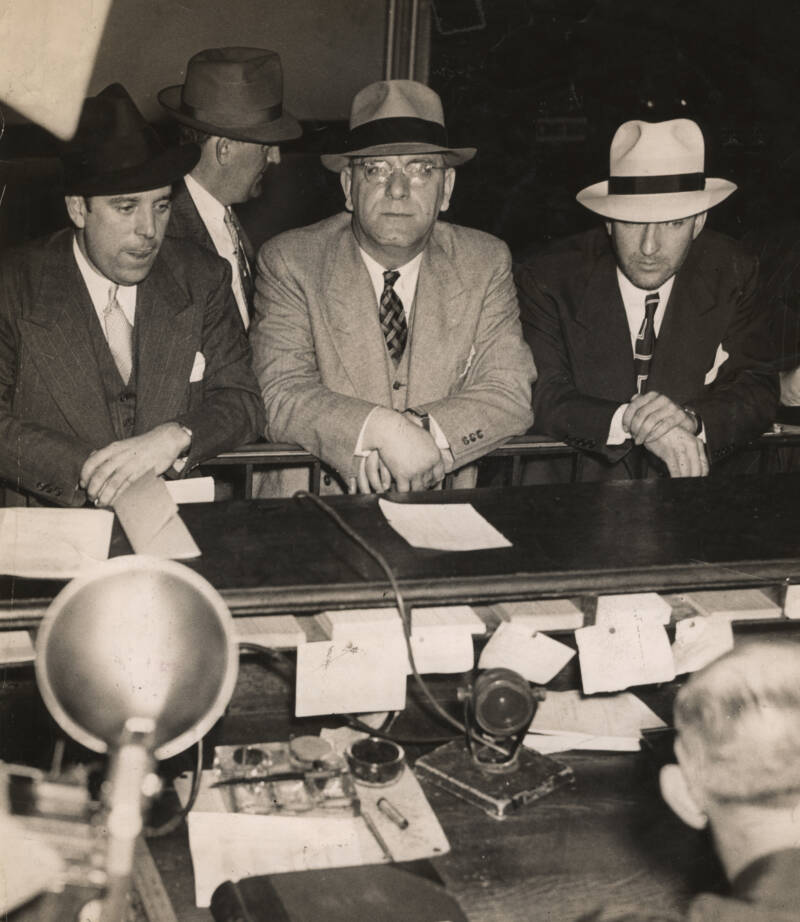 Arthur Fellig/International Center of Photography/Getty ImagesFritz Kuhn (center) was arrested in 1939 and convicted of tax evasion and embezzlement before he was eventually deported to Germany after World War II.

In Chicago, the mob’s Jewish financier and political fixer Jake “Greasy Thumb” Guzik got the call from Perlman and Lansky. Father Charles Coughlin, a Catholic priest, was the chief instigator of antisemitic diatribes. Through his national radio platform, he spread his message of hatred against the Jewish community. Guzik assembled his group of Jewish boxers to take them on.

In Detroit and Cleveland, the Jewish mob was also more than happy to dish out a good old-fashioned Nazi whomping. It was their patriotic duty as American Jews.

The fight even made it as far as Los Angeles, where Jewish gangster Mickey Cohen found himself in a police station with men wearing uniforms of the Bund, according to Tablet magazine. When officers left the room, Cohen stood up, approached the Nazis, and banged their heads together. The men screamed, jumping onto the bars of the nearby holding cell in an attempt to climb away.

By 1939 Perlman’s plan of directing Jewish mobsters to create Nazi intimidation groups was working. Then, Pearl Harbor changed everything.

The German American Bund could no longer hide behind the Constitution. Any speeches, marches, and gatherings were now considered sedition. U.S. citizens took up the challenge themselves, and German American Bund members could now no longer apply for ship-building jobs, preventing potential sabotage during the war.

In the battle of gangsters vs. Nazis, the gangsters won.

After learning about the pre-World War II battle between gangsters and American Nazis, read about how Italian mobster Lucky Luciano helped make the allied invasion of Sicily possible with Operation Husky. Then, go inside the failed German plot to assassinate Hitler during Operation Valkyrie.