Known throughout the criminal underworld as a financial genius, Meyer Lansky used Swiss bank accounts and shell companies to launder money and hide the Mafia's vast wealth from the FBI. Hulton Archive/Getty ImagesMeyer Lansky at Mount Olive in Jerusalem with the Dome of the Rock visible in the background, August 1971.

The 1920s and 1930s saw organized crime shift from a street game to a streamlined method of business. Meyer Lansky, also known as the “mob’s accountant,” was a key figure in that transition.

Lansky helped to establish the association of multi-ethnic criminal organizations that the press dubbed the “National Crime Syndicate” in 1934.

His work precedes the Prohibition days when he formed early friendships with gangsters like Bugsy Siegel and Charlie “Lucky” Luciano.

Known for his business savvy, Meyer Lansky built profitable casino ventures in the U.S. and abroad. He was physically small, well-composed, and incredibly clever. And although he was heavily involved in organized crime for nearly half a century, according to the FBI, the most serious thing he was ever convicted of was illegal gambling in 1953 — which landed him in jail for two months.

Meyer Lansky was born in 1902 in Grodno, which was then part of the Russian Empire and is in present-day Belarus. This was not an ideal place for Jews at the time. Antisemitism was mounting, so the Schowlański family felt obligated to immigrate to the United States. Lansky arrived in New York with his mother and siblings in 1911 to join his father, who’d come over a few years prior.

His birth name was Maier Suchowljansky (sometimes spelled Meier Schowlański), which he later changed to “Meyer Lansky” once in the U.S. According to The New York Times, when he arrived, his parents couldn’t remember his exact birthdate, so an immigration official assigned him a fittingly American one: July 4.

Manhattan’s Lower East Side, where Lansky was raised, was at the time packed with different cultures all crammed into one compact neighborhood. This is where Lansky’s seeds of organized crime were first planted, and how he was able to form multi-ethnic partnerships.

One of the first friends Meyer Lansky made was mobster Bugsy Siegel, who would later become Lansky’s bootlegging partner. 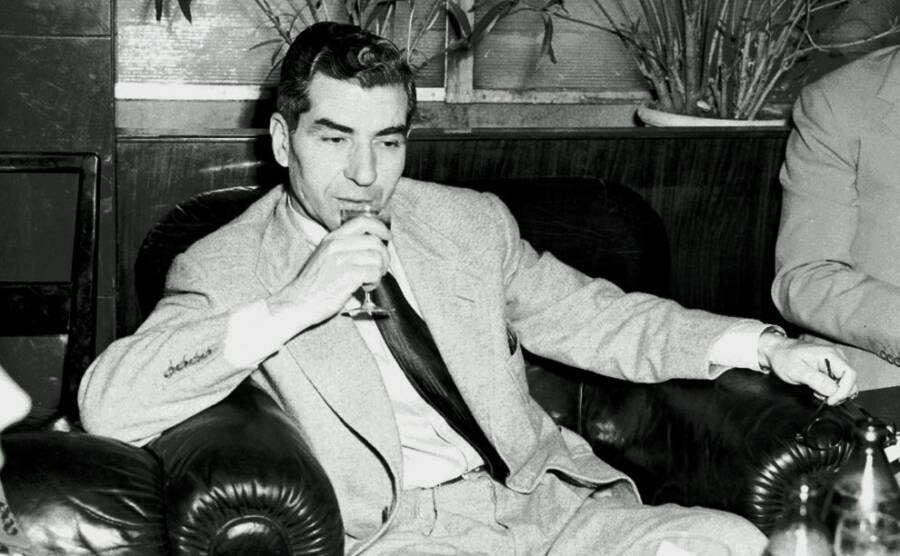 Then, Lansky met Lucky Luciano when they were teenagers. Luciano ran a small Sicilian gang that extorted money from Jewish kids, according to Organized Crime. Luciano was impressed with Lansky’s defiance against his threats.

Lanksy excelled at math and used his natural talents to start some backroom gambling games in the neighborhood. Just as his reputation around New York began to grow, so did prohibition. And with it, the start of the golden age of organized crime.

The Financial Genius Of The “Mob’s Accountant”

When prohibition began officially in 1920, Meyer Lansky told Bugsy Siegel that they had to organize in the same way the Irish and Italian gangs had. Together, they formed the Bugs and Meyer Mob, which later became one of the most well-known Prohibition gangs and lucrative rum-running operations. Francis Miller/The LIFE Picture Collection/Getty ImagesMeyer Lansky and an unidentified woman leaving the cashier’s office of the Riviera Hotel and Casino in Las Vegas in 1958.

According to Crime Reads, he also established an organization of Italian and Jewish gunmen for hire that would later become known as Murder Inc. and was headed by gangsters like Albert Anastasia and Louis Capone.

But Lansky managed to evolve this group of criminals into what, on the face of it, looked and ran like a legitimate business.

He also evolved with the times. When prohibition ended in 1933, Lansky turned back to his beginnings: gambling. He managed to open successful gambling casinos in New York, New Orleans, and Florida, all covertly.

He was able to build a gambling empire on two principles. The first was that unlike other gambling operations, which were usually rigged, Lansky insisted on honest gaming. He had genuine mathematical skills that he used to effectively figure out the odds of the most popular wagering games.

The second principle that kept his business intact was that he did not, ironically enough, use violence. Instead, he utilized mob protection and bribes against law enforcement. This ensured that the establishments were secure from other crime figures and the police alike.

To protect himself from prosecution, Lansky transferred illegal earnings from the casino empire to a Swiss bank account, because the 1934 Swiss Banking Act allowed anonymity. He went on to buy his own offshore bank in Switzerland so that he could launder money through it.

The Mobster Who Became A Nazi Hunter

Before and during World War II, Meyer Lansky’s organization of Italian and Jewish gunmen often put their skills to use against Nazi sympathizers in the United States. Lansky was therefore prepared when the American government approached him to join the World War II effort. 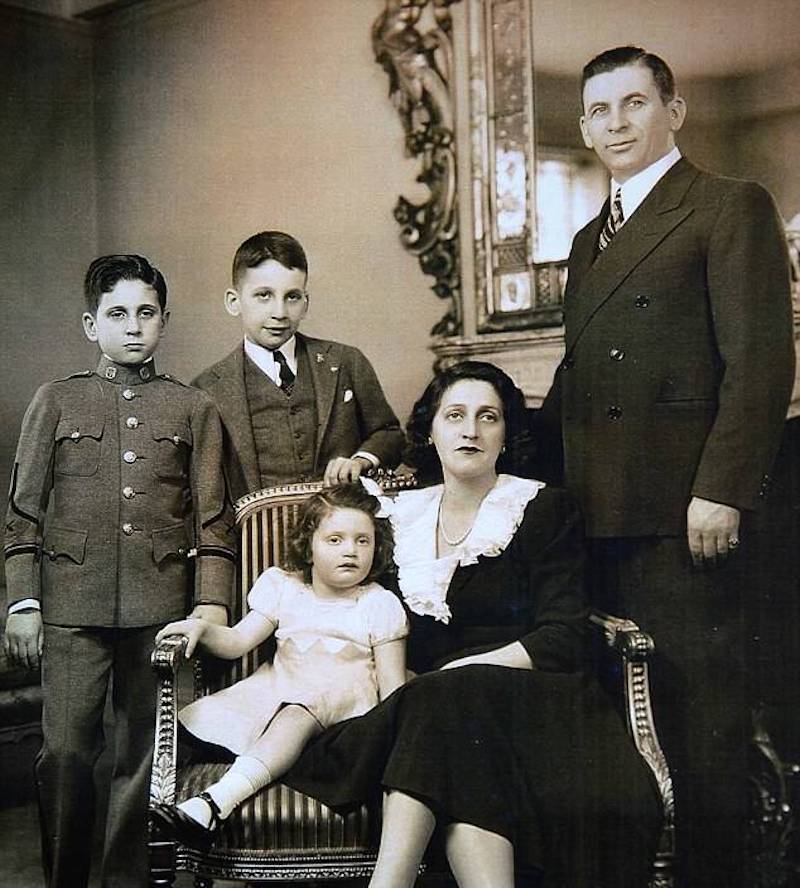 Lansky FamilyMeyer Lansky poses with his first wife and three children, circa 1940.

Lansky was too old and small by 1941 to enlist, which he had attempted, but the U.S. Naval Forces had another job waiting for him.

Lansky and his group of gunmen, who had by now created a reputation as Nazi hunters on the streets of Manhattan, followed up on tips from the Navy and the FBI, which concerned potential Reich sympathizers in a mission known fittingly as Operation Underworld.

No one outside of the FBI knows what happened to the individuals noted in those tips. But it’s safe to assume that Lansky’s war efforts on the streets proved successful.

But ever ambitious, Meyer Lansky turned his attention to Havana, Cuba, when the war ended.

Why Meyer Lansky Sets His Sights On Cuba 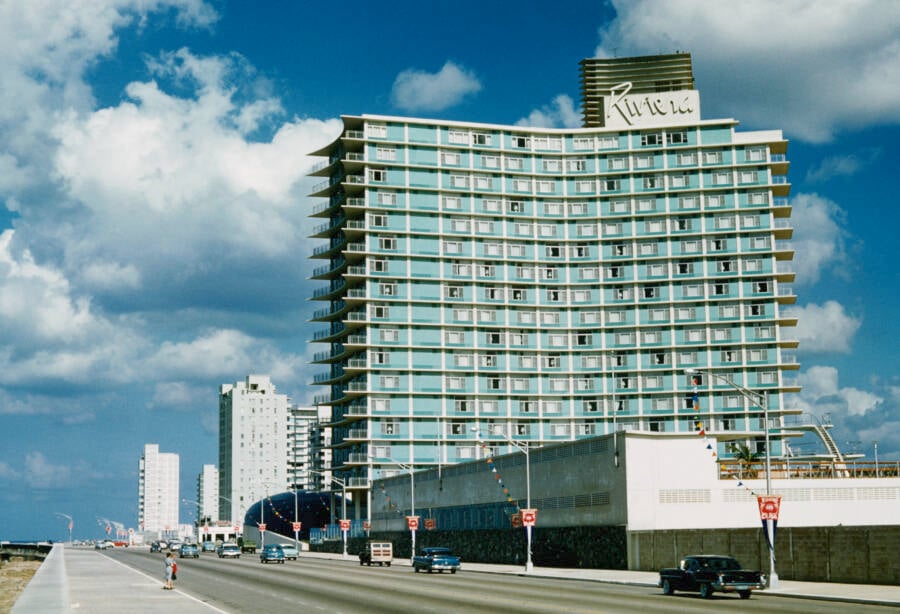 But then Meyer Lansky stepped in and formed his own business relationship with Batista. The agreement was that, in exchange for large sums of money, Batista would give Lansky control over Havana’s racetracks and casinos, opening the city to large-scale gambling. Batista also said his government would match any hotel investment over $1 million.

On Dec. 22, 1946, Lansky held the Havana Conference at the Hotel Nacional. According to The Mob Museum, all the major American leaders of the criminal underworld met there. Lansky shared his vision for a new Havana for whoever wanted to invest in it. It’s also speculated that the assassination of Bugsy Siegel was planned here, put forth by Lansky himself.

He then invested a huge sum of money into the casinos in Cuba and even built his own. Meanwhile, Batista enjoyed the kickbacks he received from Lansky’s success.

It’s estimated that by the end of the 1960s, Meyer Lansky’s net worth was over $300,000,000. But, due to his careful and clever bookkeeping, on paper Lansky was worth almost nothing.

It took the communist revolution in Cuba to bring down Meyer Lansky’s Havana businesses. The revolutionaries led to Batista’s removal and Fidel Castro’s rise to power, which resulted in Lansky’s expulsion from Cuba and his fortune seized by their government, according to The Mob Mudeum. 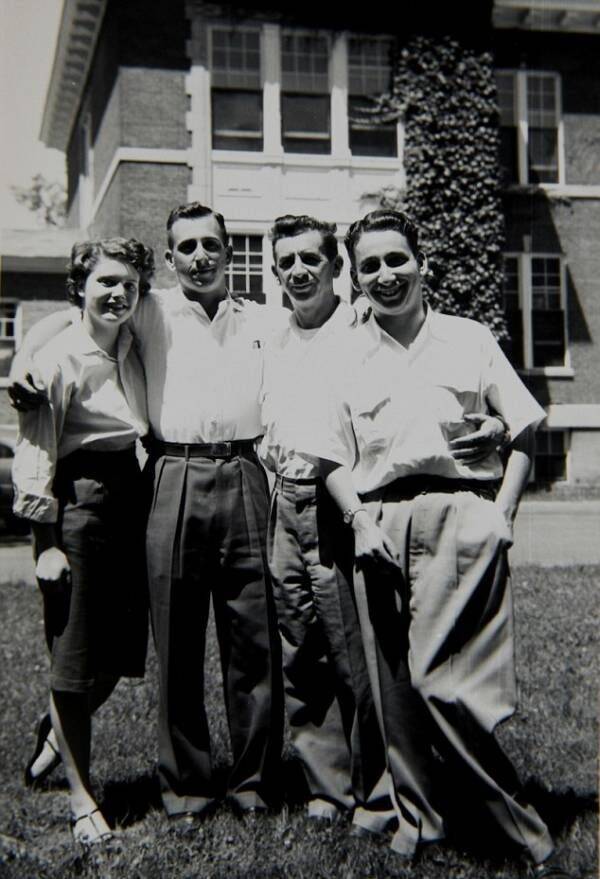 Lansky FamilyMeyer Lansky is visited by his daughter and two sons while imprisoned for 60 days in 1953, the only time he ever spent in jail.

However, Lansky continued to profit through the 1960s through loanshark ventures and numbers rackets for a time, undaunted.

In 1970, Lansky faced tax evasion charges. He attempted to escape to Israel under the Law of Return, which gave Israeli citizenship to anyone of Jewish heritage. However, Lansky was denied permanent residency due to his criminal past and deported back to the U.S. in 1972.

Meanwhile, the FBI had closely monitored Lansky for years. But they could find no evidence that linked him to major crime. He was convicted of contempt charges, but by that time he was in poor health due to lung cancer and the decision was overturned.

He spent his last years quietly at his Miami Beach home. On Jan. 15, 1983, Meyer Lansky died at 81. He was survived by his wife and three children and buried in Mt. Nebo Cemetery in Miami.

According to Lansky’s New York Times obituary, an FBI agent once admitted with “grudging admiration” that “He would have been chairman of the board of General Motors if he’d gone into legitimate business.” The paper also noted that “Mr. Lansky once boasted to an underworld associate: ‘We’re bigger than U.S. Steel.'” Six months after his death, an associate, Vincent “Jimmy Blue Eyes” showed up at Lansky’s apartment to collect the last of an outstanding debt that was owed to him. He found some jewelry, a few other valuable possessions, and some stocks and bonds, but not much else.

Likewise, his family was shocked to find out that his estate was only worth $57,000. To this day, his family does not know where all his fortune went.

Lansky kept a notebook in his desk drawer. In it, he wrote, “Take the responsibility on your shoulders and it will leave no room for chips.”

After reading about Meyer Lanksy, learn about the real life mobsters behind the movie Goodfellas. Then, read up on the world’s largest crime organizations.