The Bloody Rise And Fall Of Bugsy Siegel, From Murder Inc. Hitman To The Building Of Las Vegas

Legendary Jewish-American mobster Benjamin "Bugsy" Siegel helped develop the Las Vegas Strip — before he was brutally gunned down in 1947.

In the 1930s and 1940s, Bugsy Siegel thrived as one of America’s most notorious gangsters. He ran gambling and bootleg rackets in New York, rubbed shoulders with movie stars in Los Angeles, and poured money into building hotels in Las Vegas. But his violent delights had violent ends.

More than anything, Siegel is famous not for how he lived — but for how he died. After establishing himself as a formidable criminal presence on both coasts, Siegel had turned his gaze to the Las Vegas desert, where a smattering of casinos and hotels seemed to herald future riches for him.

After convincing his underworld associates to help him revive the construction of a hotel called the Flamingo, Siegel poured their millions into the project. But just six months after the Flamingo opened its doors, Siegel met a shocking, bloody end in his girlfriend’s Beverly Hills home.

This is the story of Bugsy Siegel’s life — and his violent death.

Inside Bugsy Siegel’s Rise To Power 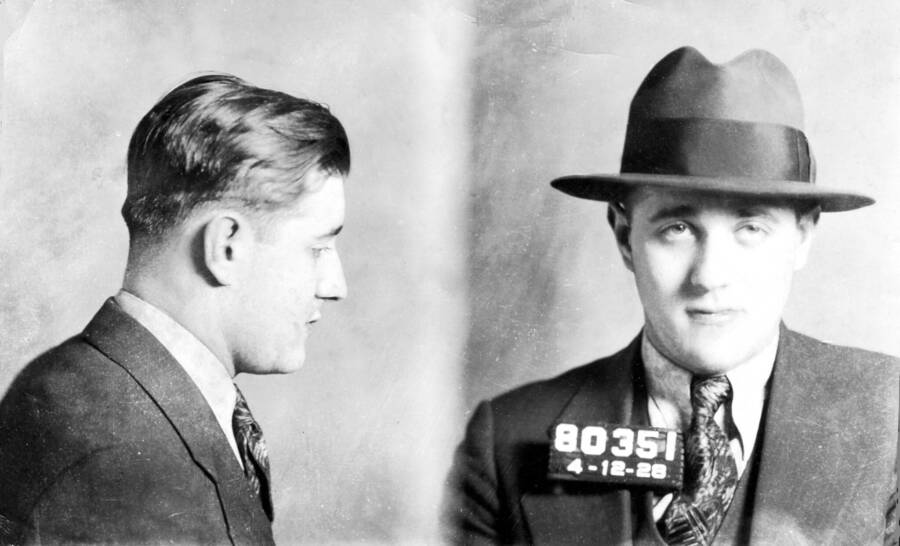 Born on February 28, 1906, to Jewish immigrants, Benjamin “Bugsy” Siegel grew up in New York City. Raised in a poor family, Siegel quickly drifted toward a life of crime as a way to make money and support himself.

He dabbled in burglary, extorted Jewish pushcart peddlers on the Lower East Side of Manhattan, and met like-minded friends, including future crime boss Meyer Lansky. Siegel and Lansky formed the “Bugs and Meyers Mob,” bootlegged liquor alongside mobsters, and even ran a murder-for-hire operation that eventually became the infamous “Murder Inc.”

Meanwhile, Siegel gained a reputation for his temper and mood swings, which caused friends to describe him as “crazy as a bedbug.” According to the History Channel, however, Siegel hated his famous nickname.

“My friends call me Ben,” he once said. “Strangers call me Mr. Siegel, and guys I don’t like call me Bugsy, but not to my face.”

But whatever he was called, it soon became clear that Siegel was playing for the big leagues. Working with Mafia boss Charles “Lucky” Luciano, as well as Frank Costello, Albert Anastasia, and Vito Genovese, Siegel was likely one of four men who killed Giuseppe “Joe the Boss” Masseria in 1931.

Siegel made sure that he looked the part, too. Flush with cash, he wore expensive clothes, frequented exclusive clubs, and even bought an apartment in Manhattan’s luxurious Waldorf Astoria Towers.

By 1937, Bugsy Siegel had more or less conquered New York. Then, the mob sent him to Los Angeles to do the same on the West Coast.

From Los Angeles To Las Vegas 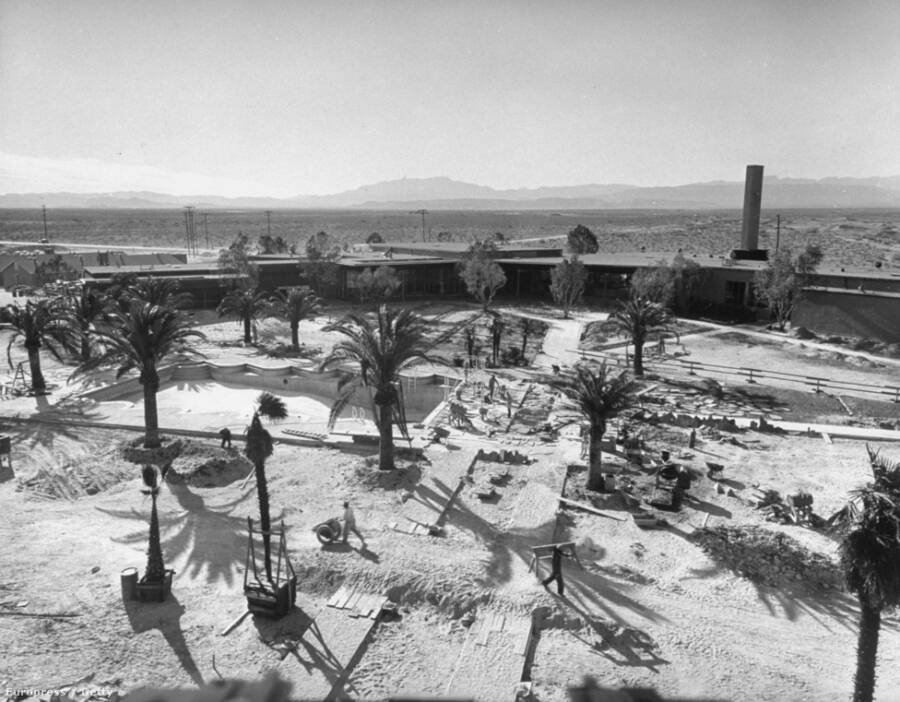 In Los Angeles, Bugsy Siegel thrived. According to Britannica, he set up gambling dens and offshore gambling ships, drug shipments — he may have established the narcotics trade between the U.S. and Mexico — and other criminal enterprises. When he wasn’t busy with building his “business,” Siegel also took out mobster informant Harry Greenberg and his own brother-in-law Whitey Krakow, who knew too much about the Greenberg hit.

Siegel also liked life in L.A., where he made friends with movie stars like Clark Gable, Cary Grant, Frank Sinatra, and Jean Harlow. Some say that Siegel may have entertained the idea of becoming an actor himself.

But Siegel ultimately had his eye on the bottom line. Around 1946, he heard about a business opportunity in Las Vegas, a hotel and casino under construction called the Flamingo that had run out of cash.

According to the Las Vegas Sun, Siegel admired how well a resort called El Rancho Vegas — located on today’s Vegas Strip — was doing. He decided that he could do the same with the Flamingo. He just needed the capital.

So, Bugsy Siegel reached out to his mob connections, including his old friend Meyer Lansky. Fatefully, he told the mobsters that the hotel could be completed for just $1 million over its original $1.2 million budget.

But construction costs soon soared for the Flamingo. Siegel’s mismanagement, and the steady theft of funds by his girlfriend, Virginia Hill, meant that the Flamingo took a whopping $6 million to build.

To make matters worse, a downpour on the Flamingo’s opening day meant that it was a subdued affair, with none of Siegel’s Hollywood friends in attendance. And the gamblers who did show seemed to have been especially lucky, winning some $300,000 in the hotel’s first two weeks.

Though Bugsy Siegel eventually managed to turn things around — by the spring of 1947, the Flamingo was making a profit — mobsters were allegedly furious about how much the hotel cost. In their eyes, Siegel had made a fatal error. And, some claim, they’d make him pay for it with his life.

The Brutal Death Of Bugsy Siegel 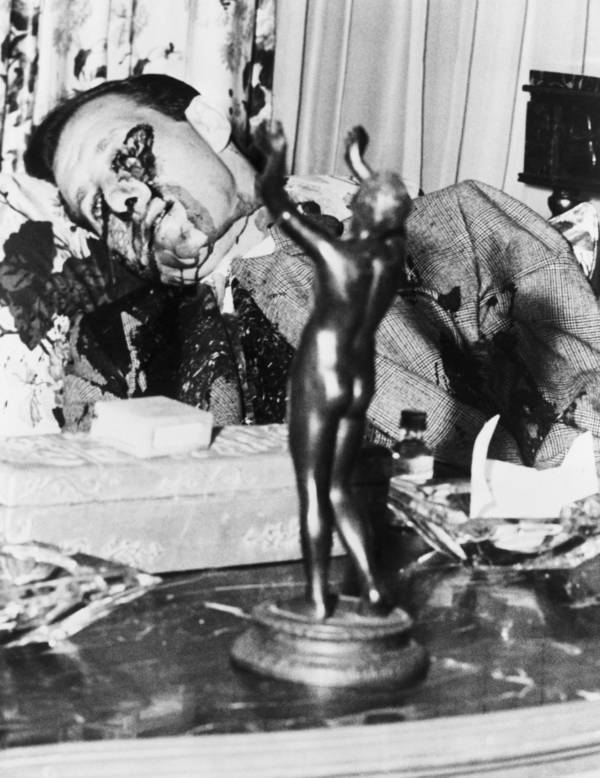 Bettmann/Getty Images Bugsy Siegel’s body as it was found after his death.

On June 20, 1947, Bugsy Siegel was at Virginia Hill’s Beverly Hills home, peacefully reading a newspaper, when a hail of bullets suddenly came through the window. An unidentified gunman fired nine shots with a .30 carbine, hitting Siegel four times and knocking an eye out of its socket.

Who killed Bugsy Siegel? To this day, no one knows for sure who took the gangster out. Some sources, like the Las Vegas Sun, suggest that irate mobsters met in Havana, Cuba, to decide Siegel’s fate. The men, including Siegel’s friend Lansky, voted to take him out early in 1947.

For them, his mismanagement of the Flamingo, and the millions of dollars he had cost them, was too big a sin to ignore. The Las Vegas Sun suggests that they sent hitmen Frankie Carbo and Frankie Carranzo to do the job.

But not everyone believes that the mob was behind Bugsy Siegel’s death. A 2014 article in LA Mag put forward a different theory — one that had more to do with a love triangle than Siegel’s infuriated associates.

This theory states that a truck driver named Mathew “Moose” Pandza killed Siegel. Why? He was in love with the wife of mobster Moe Sedway, who was tasked with keeping an eye on the Flamingo’s construction costs. Siegel was said to have hated the oversight and wanted to take Sedway out.

“I’ll have Moe shot, chop up his body and feed it to the Flamingo Hotel’s garbage disposal,” Siegel allegedly said.

When Sedway’s wife, Bee, heard about this, she went to Pandza for help. According to hours of interviews with the Sedway family, Pandza agreed. He bought a gun, practiced firing it in the desert, and crept up the driveway of Hill’s house, where he shot the mobster through the window.

But Beverly Hills Police Department spokesman Sgt. Max Lubin told People that the case was still ongoing. “We’re not releasing any information about it because it’s still an open case,” Lubin said. “It’s never been closed.”

In the end, perhaps Bugsy Siegel’s greatest legacy is Las Vegas itself. He wasn’t the first — or last — person to try to build a hotel in the desert. But Siegel’s shocking murder may have solidified the dark and thrilling reputation of Sin City as the Las Vegas Strip took shape.

“Ben Siegel did not invent the luxury resort-casino,” explained Meyer Lansky biographer Robert Lacey. “He did not found the Las Vegas Strip. He did not buy the land or first conceive the project that became the Flamingo. But by his death, he made them all famous.”

After reading about Bugsy Siegel, discover the story of boxer Mickey Cohen, who became the most powerful mobster in Los Angeles. Then, learn about the real gangs of New York that roamed the city in the 19th century.