Mickey Cohen took over for Bugsy Siegel and controlled virtually all the vice on the West Coast in the late 1940s and 1950s — and did it all while schmoozing with celebrities like Frank Sinatra.

When you think of organized crime in America, you probably think of the Mafia, right? And when you think of the Mafia, you certainly imagine it as full of Italian-American gangsters. But what you might not know is that Jewish-American gangsters actually played an enormous role in the history of organized crime — and none was flashier or more notorious than Mickey Cohen, the so-called “King of Los Angeles.” 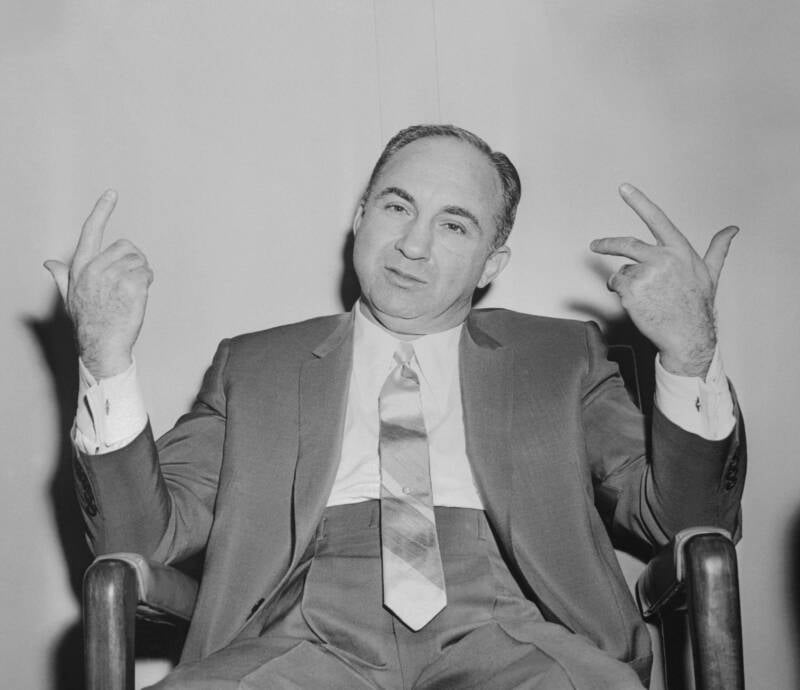 Bettmann/Getty ImagesLos Angeles mobster Mickey Cohen is seen speaking with reporters in 1959 shortly after being booked on suspicion of murder.

Cohen ruled all vice on the West Coast with an iron fist, all while surviving multiple attempts on his life. And though Cohen would later be portrayed by big-name actors like Sean Penn and Harvey Keitel on-screen, he spent his off-time schmoozing with even bigger old-Hollywood celebrities like Frank Sinatra.

And, much like the infamous Al Capone, it wouldn’t be murder, mayhem, or betting rackets that finally sent Mickey Cohen away and ended his empire — but tax evasion.

Mickey Cohen Seemed Destined For A Life Of Crime 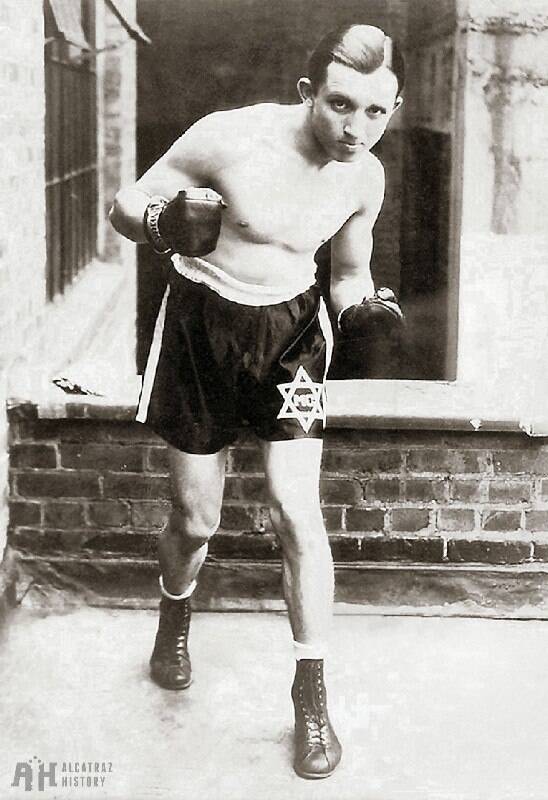 Olaudah Equiano/TwitterMickey Cohen in his early days as a boxer, circa 1930.

Born Meyer Harris Cohen on September 4, 1913, in New York City, by the time Mickey Cohen was a teenager, his mother moved the family across the country to Los Angeles. Like many poor kids, Cohen quickly fell into a life of petty crime there.

But soon, Cohen found another passion in amateur boxing, fighting in illegal underground boxing matches in L.A. When he was 15, he moved to Ohio to pursue a career as a professional fighter. However, Cohen still found himself unable to stay away from crime.

During Prohibition, Cohen worked on the side as an enforcer for the Chicago mob. There, he found an outlet for his violent tendencies. After briefly being arrested on suspicion of several murders of gangland associates, Cohen began running illegal betting operations in Chicago. In 1933, Cohen gave up his boxing career to focus full-time on organized crime.

Soon, he got another offer from another prominent Jewish gangster, none other than Bugsy Siegel, to move back to Los Angeles and work for him. There he served as muscle for Siegel, killing anyone who got in the way of his profits while also playing a major role in organizing gambling operations for Siegel.

And with a natural charm and capacity for violence, Cohen moved into the movie business, exerting control over unions and demanding cuts of studio profits from producers.

The ‘King Of Los Angeles’ Throws His Weight Around

Mickey Cohen soon partnered with Siegel’s associates, Meyer Lansky and Frank Costello, to gain control over organized crime on the West Coast. And Cohen wasn’t shy about killing anyone who threatened that control. Soon, he was becoming a major force in the crime world in his own right — and according to Biography, he even hired a private tutor to give him etiquette lessons so he could better fit in with the upper crust.

Cohen also helped run Siegel’s hotel in Las Vegas, the Flamingo, playing a significant role in setting up sports betting in Las Vegas. But Cohen’s help wasn’t enough to save the Flamingo from disaster.

Thanks to Siegel’s skimming of funds, the Flamingo was rapidly losing money. In 1947, the legendary mobster was gunned down and other gangsters, who were heavily invested in the casino, soon arranged for Siegel’s assassination.

Cohen, in his typical style, stormed into a hotel where he thought Siegel’s murderers were staying and fired a pair of .45 handguns into the ceiling. He demanded that the murderers come outside to meet him in the street. It was around this time that LAPD’s new and secret Gangster Squad was surveying criminal operations in the city. So when the cops were called, Cohen fled.

Mickey Cohen increasingly became a major figure in underground crime after Siegel’s death. But soon, his violent ways were beginning to catch up with him.

Not only were the police beginning to take a closer look at Cohen’s activities, but he had made a number of very dangerous enemies inside of organized crime. 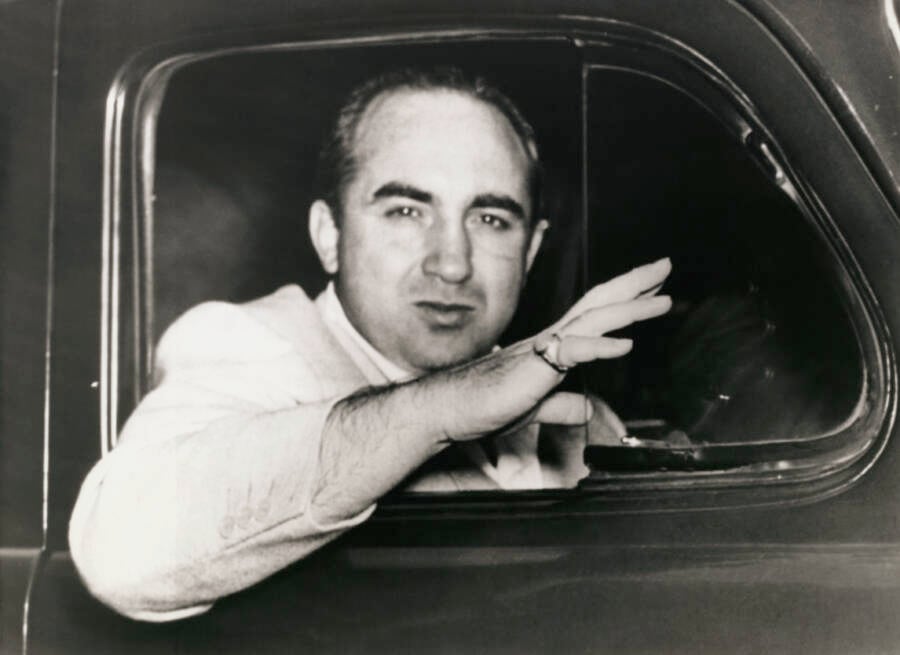 Around 1950, Mickey Cohen’s home in the posh neighborhood of Brentwood was bombed by a rival, despite the fact that he’d spent a small fortune to “gang proof” it. And Cohen was reportedly most upset that a number of his 200-some tailor-made suits were destroyed in the explosion.

After his house was bombed, Cohen turned his home into a veritable fortress equipped with floodlights, alarms, and an arsenal of weapons. He then dared his enemies to come get him. In all, Cohen would survive 11 assassination attempts and constant harassment from police.

Ultimately, it was the law that got Cohen. In 1951, he was sentenced to four years in federal prison for income tax evasion, much like Capone. But, despite his involvement in many murders over his career, the police couldn’t get enough evidence to charge Cohen with a single killing.

After his release, Cohen ran a number of different businesses. But he was arrested and charged — once again — with tax evasion in 1961 and sent to Alcatraz. After being bailed out from “the rock,” he would spend the next 12 years at a federal prison in Atlanta, Georgia after his appeals failed, according to the Crime Museum.

Mickey Cohen was finally released in 1972 and spent the remainder of his years making television appearances — and, miraculously, avoiding ever being tied officially to organized crime.

However, back in 1957, between prison sentences, Cohen gave an infamous interview on ABC with journalist Mike Wallace, according to TIME. Cohen made no bones about the violence he oversaw as gangland boss of Los Angeles.

“I killed nobody that didn’t deserve killing,” Cohen said. “In all of these here killings there was no alternative. You couldn’t call them cold-blooded killings. It was either my life or theirs.

Mickey Cohen died just four years after his release from prison in Georgia, of stomach cancer.

Enjoy this look at Mickey Cohen? Next, read how “Little Caesar” Salvatore Maranzano created the American Mafia. Then discover how Joe Masseria’s murder gave rise to the Mafia’s golden age.