Inside The Criminal Life Of Tilly Devine, One Of The Most Notorious Women In Australian History

Tilly Devine started out as an impoverished sex worker in the London slums before she moved to Australia, opened a string of successful brothels, and became one of the most violent crime bosses in Sydney.

In the early 20th century, Tilly Devine was one of the most powerful women in Sydney, Australia. But she wasn’t a politician or even a successful media mogul — she was a brothel owner and an organized crime boss. 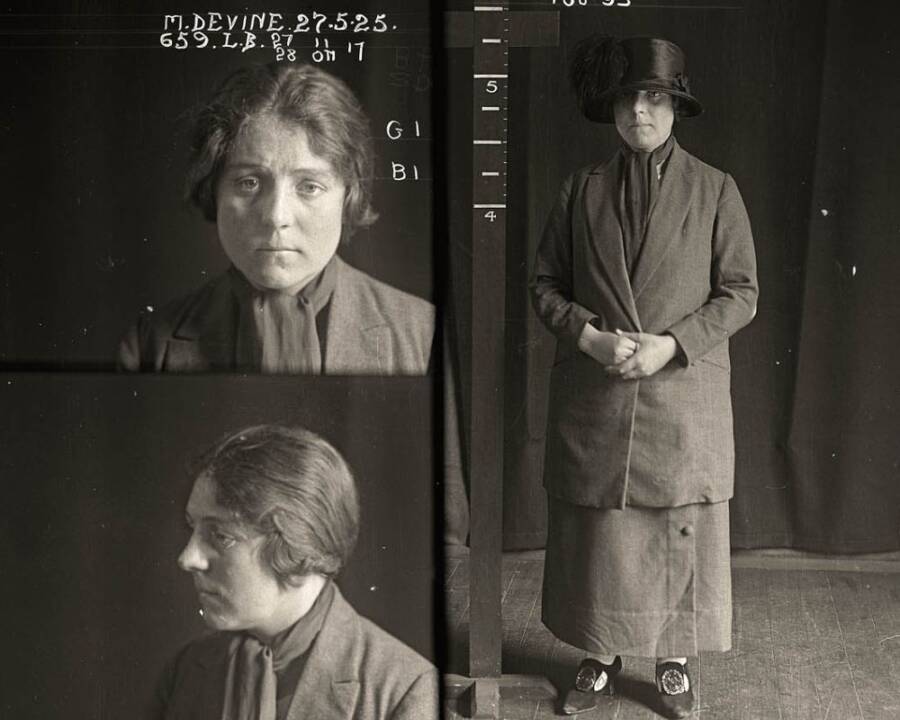 Wikimedia CommonsPhotos taken of Tilly Devine by police after one of her many arrests in 1925.

Devine began her career as a sex worker in the slums of London, but she moved to Australia with her husband, “Big Jim” Devine, in 1920. Due to a loophole in the law, Tilly Devine found that she could legally open a brothel in Sydney, and she was soon running a successful chain of bordellos in the city.

Her husband contributed to the business by selling drugs like opium and cocaine, and Devine quickly became a powerful name in Sydney’s criminal underworld. Her illicit line of work and her violent rivalry with another female gang leader, Kate Leigh, earned Devine a nasty reputation.

Devine was arrested more than 200 times over the course of her criminal career, but the final years of her life were much quieter than the earlier decades. She was forced to sell off all but one of her properties, and she died alone and in poverty in 1970. This is the story of the “Worst Woman in Sydney.”

The Early Life Of Tilly Devine And Her Move To Australia

Tilly Devine was born Matilda Mary Twiss in South London on Sept. 8, 1900, according to the Dictionary of Sydney. Her family was poor, and she dropped out of school at the age of 12 to begin working in a factory. Determined to rise above her humble station, however, Devine decided to go into sex work, and she began walking the streets of London’s glamorous West End.

Around the time she turned 16, Tilly Devine met James Edward “Big Jim” Devine, a soldier with the Australian Imperial Force who was stationed in London during World War I. They were married just before Devine’s 17th birthday, and they welcomed a son shortly after. 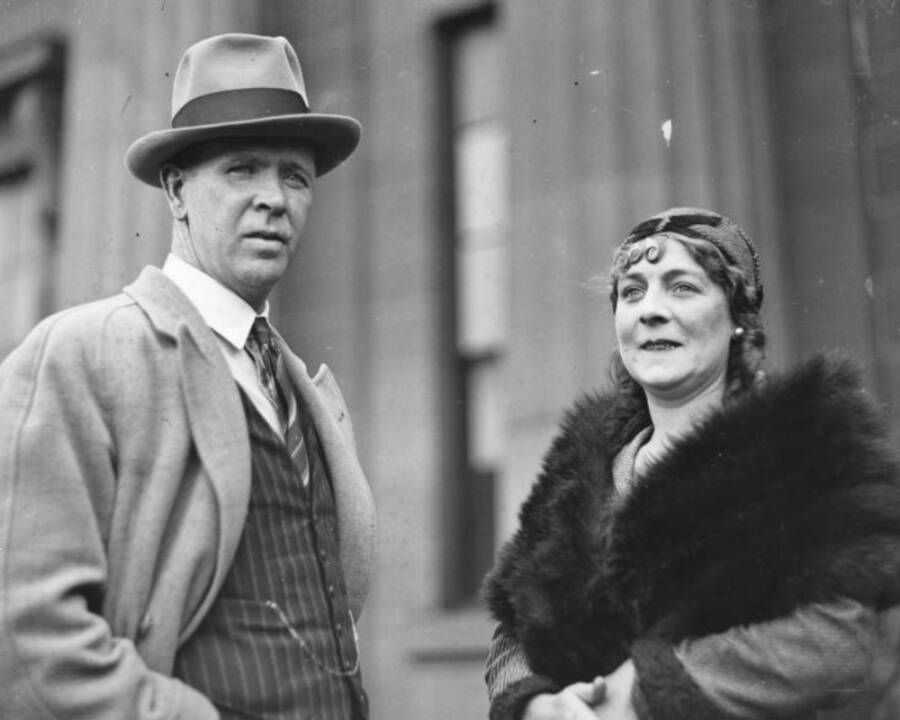 Australian War Memorial“Big Jim” and Tilly Devine, pictured together in 1930.

The newlyweds’ relationship was turbulent from the beginning. They were verbally and physically abusive toward each other, which was only exacerbated by the fact that both of them drank heavily. Despite the fact that she was now a married woman, Devine continued her career in sex work because it paid so well, and Big Jim even supported her, acting as her protector.

When World World I ended, Big Jim was sent back to Australia, and Devine left their son with her parents and followed him on the Waimana “war bride” ship, according to the New South Wales State Archives and Records. She arrived in Sydney on Jan. 13, 1920 — and she quickly began making a name for herself.

How Tilly Devine Became Known As The ‘Worst Woman In Sydney’

After arriving in Australia, Tilly Devine once again picked up sex work, charging the high price of 10 shillings per encounter. Her husband worked as her pimp, chauffeur, and “getaway man,” and he also started selling opium and cocaine to bring in extra money.

During this time, Devine was in trouble with the law more often than not. Between 1921 and 1925, she was arrested at least 79 times on charges related to sex work, indecent language, and violence. Police described her as “a prostitute of the worst type and an associate of the worst types of prostitutes, vagrants, and criminals.”

Soon, Tilly Devine and Big Jim started looking for other ways to make a living that would keep them both out of jail. That’s when they learned about the Police Offences Act of 1908. 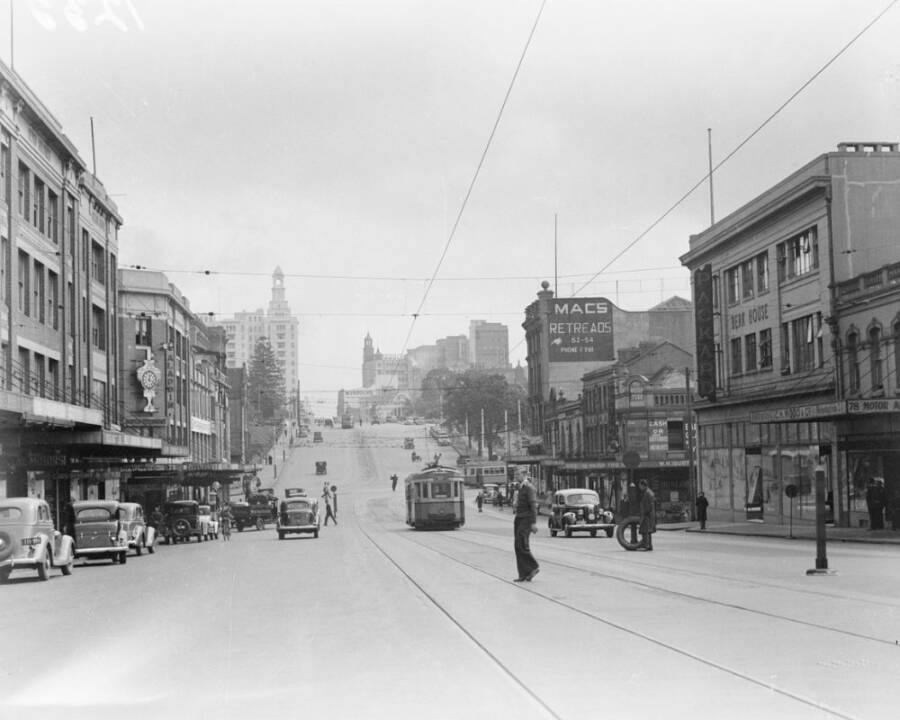 NSW Police Forensic Photography Archive, Justice and Police Museum, Sydney Living MuseumsA street in the Sydney, Australia neighborhood of Woolloomooloo circa the 1920s, when Tilly Devine and her razor gang ruled the streets.

The law had made it illegal for men to run a brothel or profit from the earnings of a sex worker — but it said nothing about women. In fact, the loophole made it perfectly acceptable for Devine to become a madam.

By the late 1920s, Devine was the proud owner of numerous brothels throughout Sydney. She employed a gang of criminals to act as bodyguards for her workers, and she achieved such success that she became known as the “Queen of Woolloomooloo,” the area of the city in which she primarily operated.

Unsurprisingly, Devine made many enemies while running her business — and her most notorious adversary was Kate Leigh.

The Vicious Rivalry Between Kate Leigh And Tilly Devine

Kate Leigh, widely known as the Queen of Surry Hills, was well-established by the time Devine became a successful madam. Leigh had also made her fortune through a life of crime, but in a very different business — liquor sales.

Australian law prevented alcohol sales after 6 p.m., so Leigh created a successful underground market selling liquor in the evening. Though most of her money was made through bootlegging, she also owned a number of brothels and sold drugs. It was rumored that while she made her money off of illegal vices, she was actually a teetotaler.

The two crime bosses crossed paths many times because they dealt in the same illicit trades. Indeed, their rivalry grew so violent that they even personally fought in the streets on several occasions. And their razor gangs — so called because of the cut-throat razors that members used as weapons — were so notorious that their antics became known as the “razor gang wars.”

According to Atlas Obscura, in 1929, Devine reportedly had an altercation with Leigh’s friend Vera Lewis. A newspaper stated at the time, “Lewis alleged that Devine scratched her… and getting her teeth on her little finger would not let go until the police intervened.” 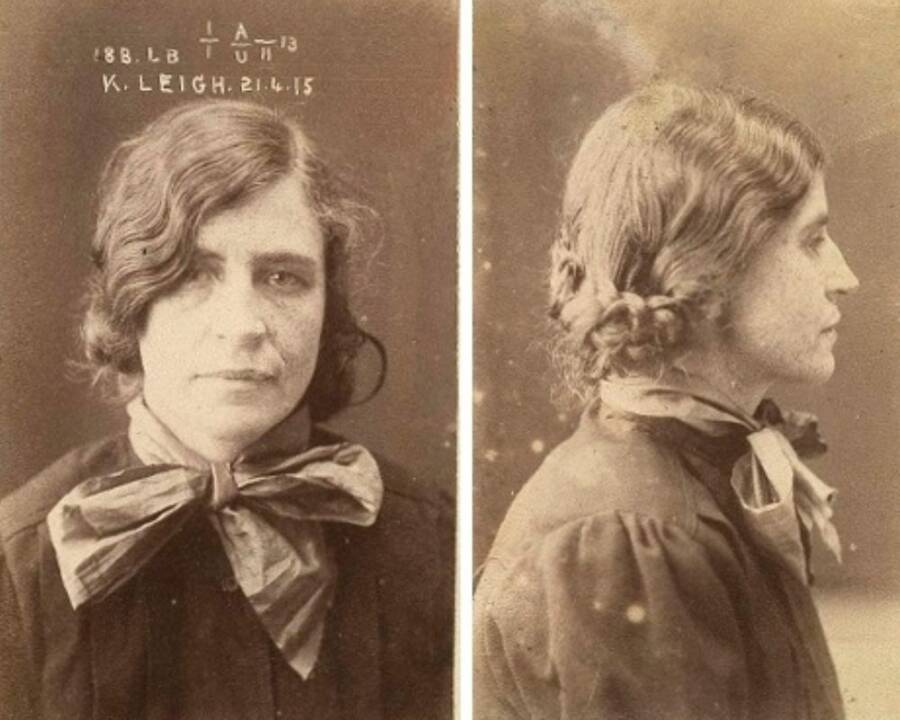 That same year, Leigh’s gang ambushed two of Devine’s men, who fled to the Devine home to await another attack that they knew was coming. When Leigh’s gang returned at midnight, Big Jim fatally shot George Gaffney, one of Leigh’s best men. He was found not guilty of murder since he was protecting his property, but the incident only served to strengthen the rivalry between Tilly Devine and Kate Leigh.

By 1936, the violence between the women’s two razor gangs was such an issue that Sydney police commissioner William MacKay made a deal with Leigh and Devine: If they stopped the bloody battles on the streets, the police would turn a blind eye to their other illegal endeavors.

The women agreed, but although Devine continued to operate her various businesses without police interference, her career eventually took a downturn for other reasons.

The Tumultuous Downfall Of The ‘Queen of Woolloomooloo’

In 1943, Tilly Devine filed for divorce from Big Jim on the grounds of cruelty. Their 27 years of marriage had been marked by violence — Big Jim had even been charged with attempting to murder Devine after she caught him in an affair in the 1930s — and she finally decided she’d had enough.

She quickly fell in love with a man named Eric Parsons, but their marriage was also plagued by domestic violence. Just a short time before their wedding, she shot him during a drunken argument, but charges were dropped when Parsons refused to testify against her. Undeterred, he married her anyway in May 1945, and they remained together until his death 13 years later.

In 1955, Tilly Devine was ordered to come up with $20,000 in unpaid taxes. In order to comply, she was forced to sell off all but one of her properties. She went from one of the wealthiest women in Sydney to nearly destitute in a matter of years, and her last remaining brothel closed in 1968 after her competitors firebombed it. 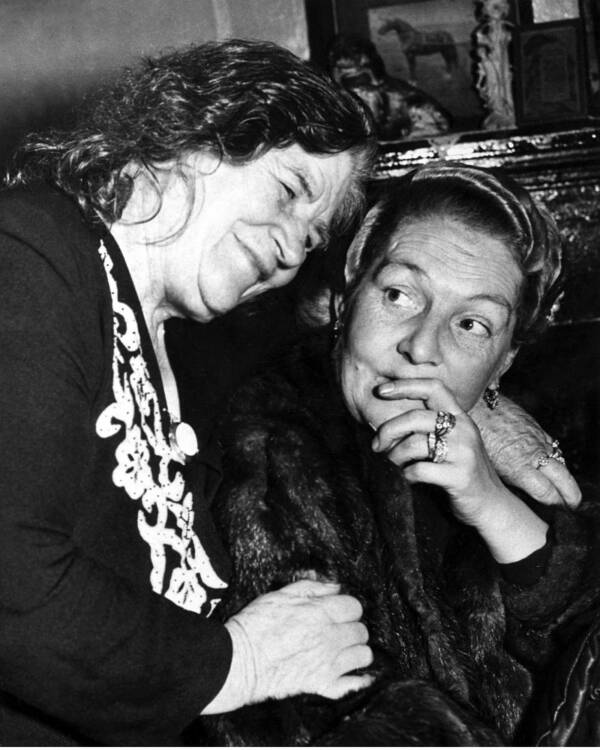 Fairfax Media via Getty ImagesDespite their fierce and often violent rivalry throughout the 1920s and ’30s, Kate Leigh (left) and Tilly Devine made up later in life.

Tilly Devine died shortly after, on Nov. 24, 1970, after a battle with chronic bronchitis and cancer. Once one of the most notorious women in all of Australia, Devine’s death was barely recognized by the public. Few attended her funeral, and when one woman proposed a toast in her memory at a local bar, nobody bothered to drink.

Her obituary in the Daily Telegraph read: “A vicious, grasping, high-priestess of savagery, venery, obscenity and whoredom… She died friendless and alone, and for that she must be pitied. But if they hold a wake for her the sorrow will be slobber and crocodile tears. She was a wretched woman.”

Tilly Devine had a much different take on her own life in an obituary she wrote for herself, as reported by the Daily Mirror. “Give a dog a bad name and it sticks,” Devine said. “I wasn’t as bad as I was painted. There’s lots in Sydney who will miss me — even coppers.”

After learning about the criminal life of Tilly Devine, go inside the story of Ned Kelly, the Australian outlaw who became a folk hero. Then, read about Calamity Jane, the Wild West’s most notorious frontierswoman.