Two emus named Kevin and Carol were previously banned from the Yaraka Hotel for bad behavior. 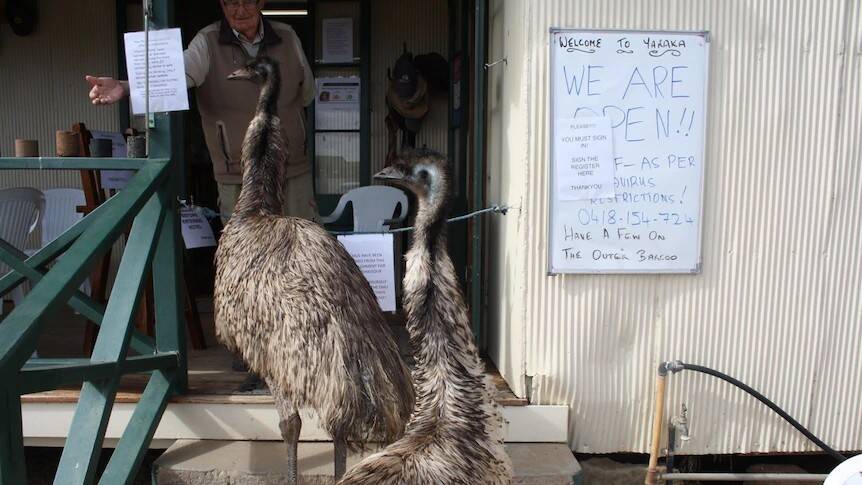 FacebookThe Yaraka Hotel was forced to create an “emu barrier” at the entrance to the pub in order to keep Kevin and Carol out.

A few years back, Kevin and Carol of small-town Yaraka, Australia gained a reputation as local menaces — so much so, in fact, that they were banned from a neighborhood pub for bad behavior. They’re also emus.

The rowdy flightless birds had been frequent visitors to the Yaraka Hotel, the sole pub in a town with a population of about 20 people, according to ABC News.

Yaraka sits two and a half hours south of Longreach in Queensland, Australia. It’s a dot on a dot on a dot on a map, in terms of size, and would have likely stayed out of the headlines had the Yaraka Hotel not made international news in 2020 for banning Kevin and Carol from the establishment, largely for stealing food, drinks, and car keys from tourists visiting the pub.

Of course, the emus’ droppings played a role too — understandable, considering that a full-grown adult emu can weigh up to 132 pounds.

Still, the emus’ caretaker, Leanne Byrne, said that despite their mischievous behavior, Kevin and Carol “love cuddles.” The emus were known to be particularly comfortable around humans, even confident, which made them popular around town and among tourists. In fact, the town even sells merchandise featuring the two.

But at a certain point, it seems, their mischief simply became too much for the owners of the Yaraka Hotel.

“They handled it,” Byrne said. “[Kevin and Carol] used to try and get up the stairs and stuff, but they did put a chain across there to stop them. It doesn’t stop all the people from coming to see them, though.” 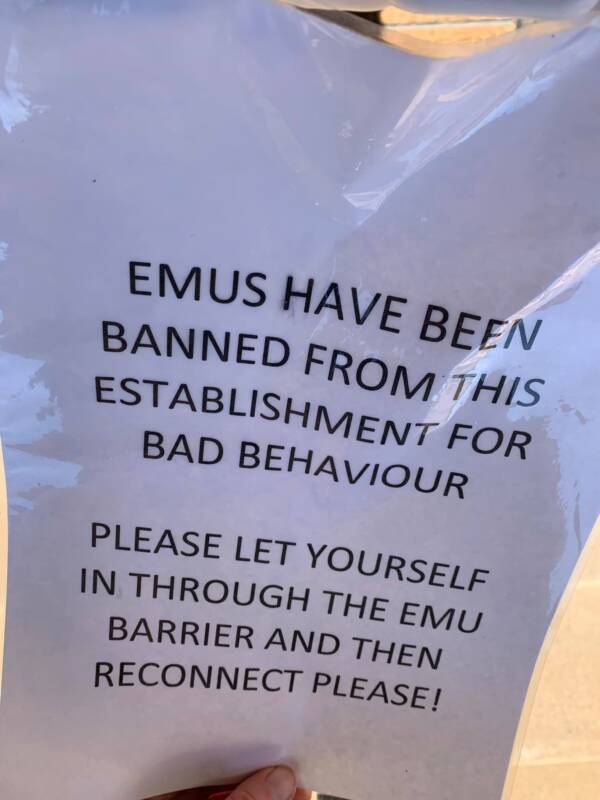 FacebookA sign put up by the Yaraka Hotel informing visitors of the ban on emus.

Byrne had likewise earned a reputation in the small town, as the “Yaraka Mother of Dragons,” in reference to Daenerys Targaryen from Game of Thrones. Like the character, Byrne’s claim to fame was hatching eggs — though, in this case, they were the emu eggs that grew up to be Kevin and Carol.

“They’re not my pets,” Byrne said. “They just tended to stay, and everyone looked after them type thing. They’re still wild animals.”

Each year, Byrne travels for a few months to work, taking her away from her home in Yaraka. Usually, when Byrne traveled, Kevin and Carol would venture off into the wilderness and return when Byrne did.

This past January, however, they didn’t.

Naturally, this caused concern among the locals, who worried that something might have happened to the beloved, if troublesome, emus.

Byrne did some investigating and discovered that while Kevin and Carol haven’t hung out much around town, they are still local to the area. 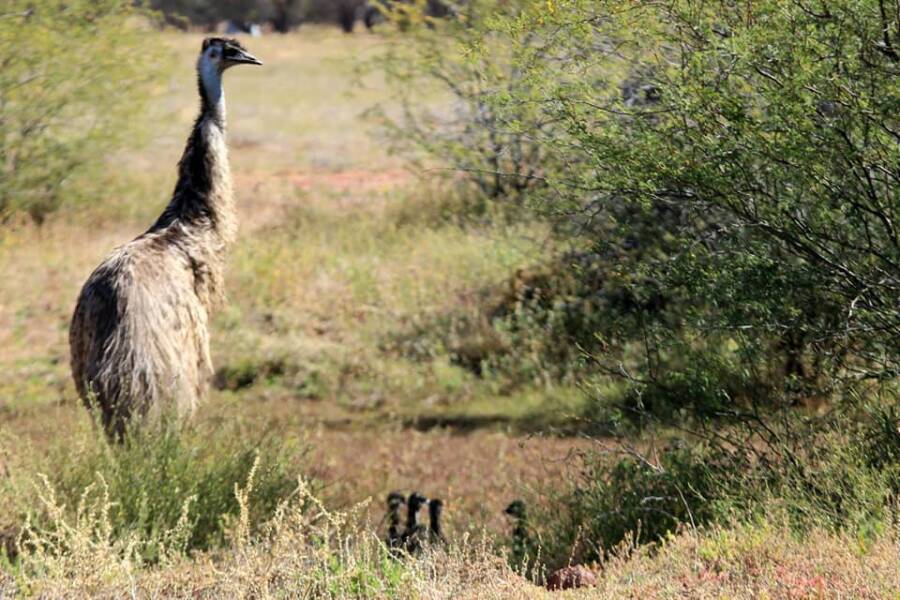 FacebookLocals have spotted Kevin and Carol with their four baby chicks in multiple areas around town, meaning they are alive and well.

Speaking with news.com.au, she said, “Some gentlemen were cutting some wood, and they came up behind them and tapped them on the shoulder and said, ‘Hi.'”

What’s more, Kevin and Carol weren’t spotted alone in town. They had four baby chicks with them. “And they’re brother and sister,” Byrne said, “so we’ll just leave that alone.”

She explained that when Kevin and Carol were younger, there was a drought that made it difficult for the emus to find drinking water and food, which could explain why they stayed in town as often as they did — and why they favored the Yaraka Hotel in particular.

But now that the drought has ended, there are plenty of watering holes for the emus and their chicks to drink from.

That hasn’t stopped townsfolk from calling Byrne whenever there’s a sighting, though. 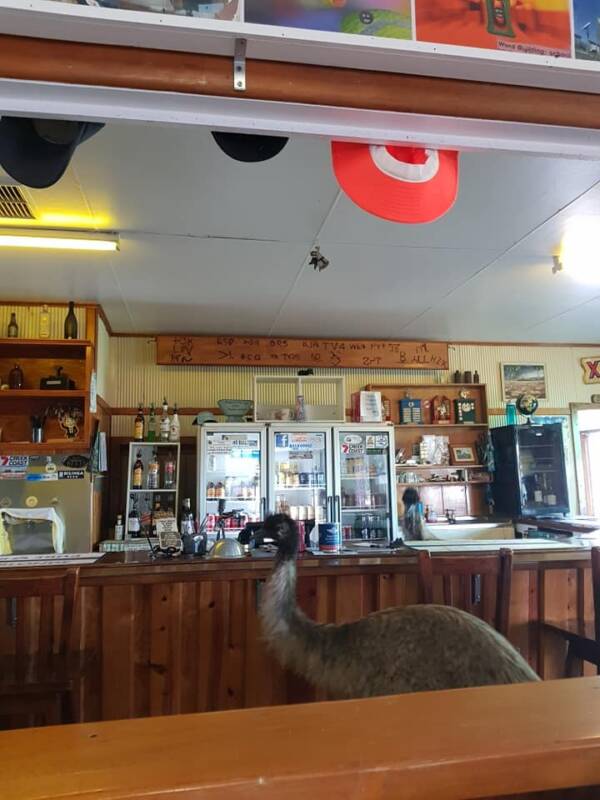 FacebookBefore the ban, Kevin and Carol used to let themselves in and walk about the Yaraka Hotel.

“A lot of townsfolk ring me straight away and say, ‘I think Kevin and Carol are down near the dump,’ and I rush down there and can’t see them, or, ‘I think they’re up near the airstrip,’ and nope I can’t see them,” she said.

Byrne also said that Carol will still swing by for a cuddle and to rest her head on Byrne’s shoulder, however. And for what it’s worth, Byrne actually prefers that Kevin and Carol don’t spend as much time in town with their chicks.

When Byrne was given the eggs that hatched into Kevin and Carol, they were in fact only two of a total of nine.

The other seven, unfortunately, never made it to adulthood. Most of them became the victims of automobile accidents, and Byrne hopes that Kevin and Carol stay away from traffic in town to keep their babies from the same fate.

“I hope when they’re a bit older, they’ll come back with their chicks,” Byrne said.

Kevin and Carol are hardly the first emus to cause trouble in Australia. In fact, back in 1932, the emu population was so out of control, Australian farmers fought a war against them. And earlier this year, an Australian town was terrorized by another group of animals: kangaroos.