Inside The Devastating Death Of Ernest Hemingway, The Author Whose Work Defined America’s ‘Lost Generation’

Ernest Hemingway famously struggled with alcoholism and mental illness for decades before taking his own life in 1961. 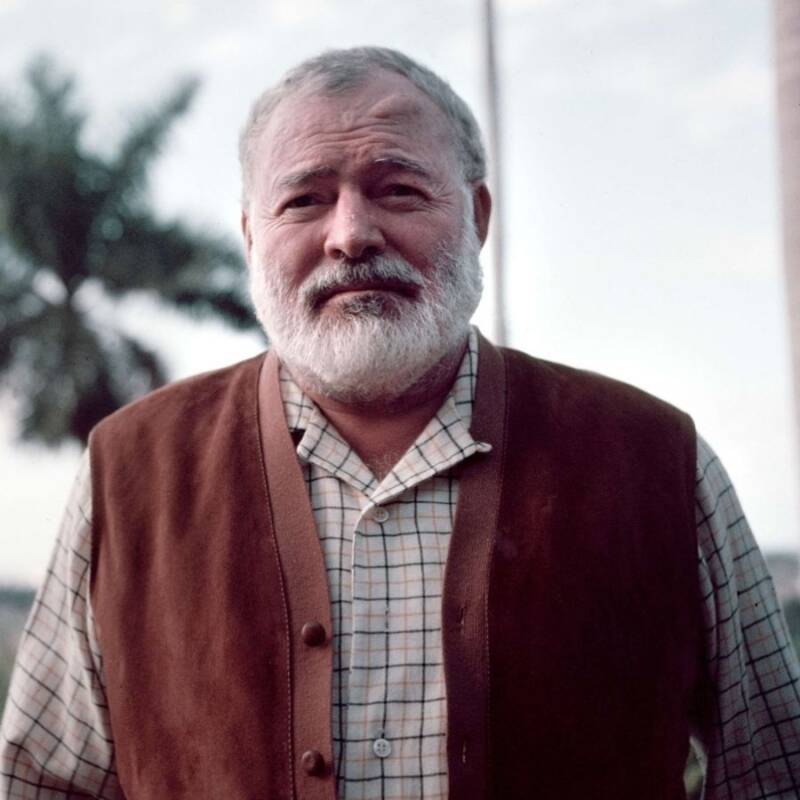 Public DomainErnest Hemingway in Cuba in 1954.

Ernest Hemingway was one of the most celebrated writers of the 20th century. With his novels such as The Sun Also Rises and The Old Man and the Sea still studied in classrooms across America today, Hemingway’s legacy continues to inspire generations of readers. But the controversy surrounding his death lives on as well.

On July 2, 1961, Ernest Hemingway died at his home in Ketchum, Idaho. The New York Times reported that he accidentally shot himself, and Blaine County Sheriff Frank Hewitt initially said that no foul play was suspected.

But just two days prior, Hemingway had been released from the Mayo Clinic in Rochester, Minnesota, where he’d been treated for depression and other mental health struggles. People soon began wondering whether the famed author’s death was truly an accident.

Hemingway’s wife, Mary, later admitted to the press that he had indeed taken his own life. And in the decades following his demise, multiple members of his family died by suicide as well — sparking rumors of a mysterious “Hemingway curse.”

The Volatile Life Of Ernest Hemingway

Although Ernest Hemingway was a prolific author who won both the Pulitzer Prize and the Nobel Prize in Literature for his work, he led a life full of tragedy and frequently struggled with his mental health.

According to the Los Angeles Times, Hemingway’s mother, Grace, was a controlling woman who dressed him as a little girl when he was a child. She wanted him to match his older sister because she was disappointed she hadn’t had twins. 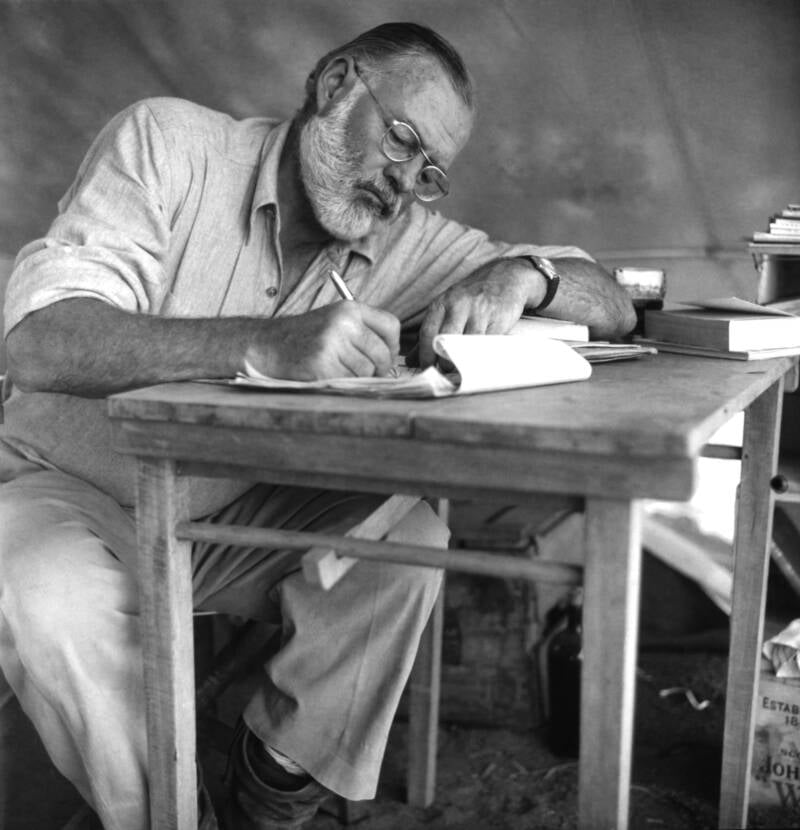 Earl Theisen/Getty ImagesErnest Hemingway published seven novels and six collections of short stories over the course of his illustrious career.

Meanwhile, his father, Clarence, was manic-depressive and had the tendency to become violent. When Hemingway was 29, Clarence died by suicide. According to Biography, the author blamed his father’s death on his mother.

Hemingway’s third wife, Martha Gellhorn, once wrote, “Deep in Ernest, due to his mother, going back to the indestructible first memories of childhood, was mistrust and fear of women.” She claimed that it was because of Grace that Hemingway had issues with abandonment and infidelity.

When Hemingway was injured while volunteering as an ambulance driver in Italy during World War I, he reportedly fell in love with his nurse and spiraled into a depression when she rejected him.

And when his marriage with his first wife, Hadley Richardson, ended in divorce because Hemingway was unfaithful, he carried his regret and anguish with him for the rest of his life.

Hemingway had just married his second wife, Pauline Pfeiffer, at the time of his father’s death, and his struggle with mental illness and alcoholism quickly began to worsen. The author wrote in a letter to Pfeiffer’s mother about his father’s suicide, “I’ll probably go the same way.”

Unfortunately, 33 years later, he did.

According to the Independent, Ernest Hemingway told a friend after his father’s death, “My life was more or less shot out from under me, and I was drinking much too much entirely through my own fault.”

Despite several doctors telling him to stop drinking because he’d developed liver damage as early as 1937, when he was just 38 years old, Hemingway continued his unhealthy relationship with alcohol. 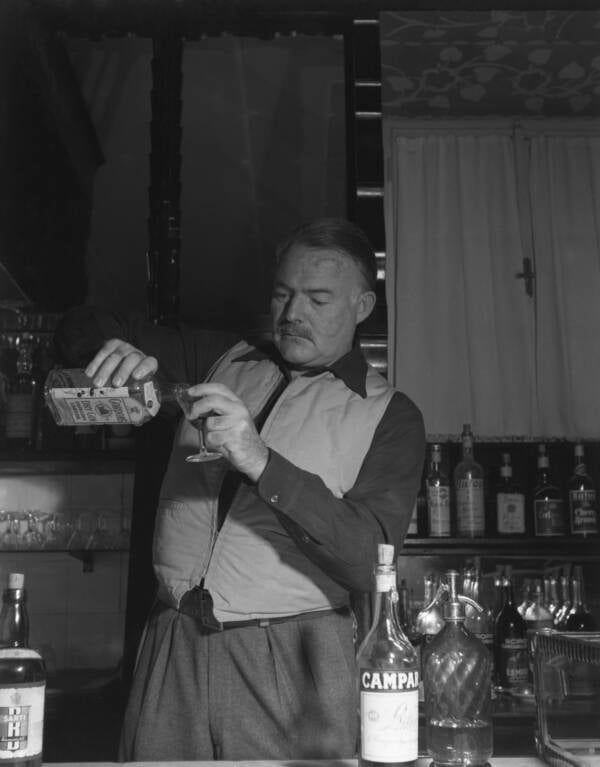 Hemingway also had a strange fascination with death, and he gravitated toward gory activities like fishing, hunting, and watching bull fights. He even told actress Ava Gardner in 1954, “I spend a hell of a lot of time killing animals and fish so I won’t kill myself.”

That same year, he survived two plane crashes while hunting in Africa. He suffered serious injuries in the second, including two cracked vertebrae, a fractured skull, and a ruptured liver. The event took a toll on both his physical and mental health, and he continued to drink copious amounts of alcohol while he was bedbound during his recovery.

As the author grew older, his friends and family members noticed that he began acting disoriented and paranoid. He believed the FBI was surveilling him — but he turned out to be right.

According to PBS, the FBI had been tapping Hemingway’s phones and filing reports on him since the 1940s, because they were suspicious about his activities in Cuba.

Hemingway also began struggling to write. He tried to work on a memoir of his time in Paris, but he had a difficult time doing so. And when he was asked to write a short piece for John F. Kennedy’s inauguration, he wept and said, “It just won’t come any more.”

By late 1960, Hemingway’s mental health had deteriorated to the point that his fourth wife, Mary, had him admitted to Mayo Clinic for treatment. She later told The New York Times, “When he went to the Mayo Clinic in November of 1960, his blood pressure was very high. But his real trouble was a serious, very serious breakdown. He was so depressed I cannot even say when he started to feel so depressed.”

Hemingway was released in January 1961, but when Mary found him holding a shotgun just three months later, he was immediately readmitted.

The Death Of Ernest Hemingway And Its Controversial Aftermath

In April 1961, Hemingway boarded a small plane to travel from his home in Idaho to the Mayo Clinic in Minnesota. According to PBS, when the plane stopped in South Dakota to refuel, Hemingway reportedly tried to walk straight into the propeller — but the pilot cut it off just in time.

During his second two-month stay at the clinic, Hemingway underwent at least 15 rounds of electroconvulsive shock therapy and was prescribed a new drug called Librium. This caused the author to have short-term memory issues without providing much relief for his depression, but he was discharged at the end of June anyway.

When he arrived back in Ketchum, Idaho, he spoke with his longtime friend and local motel owner Chuck Atkinson. After Hemingway’s death, Atkinson told The New York Times, “He seemed to be in good spirits. We didn’t talk about anything in particular.” 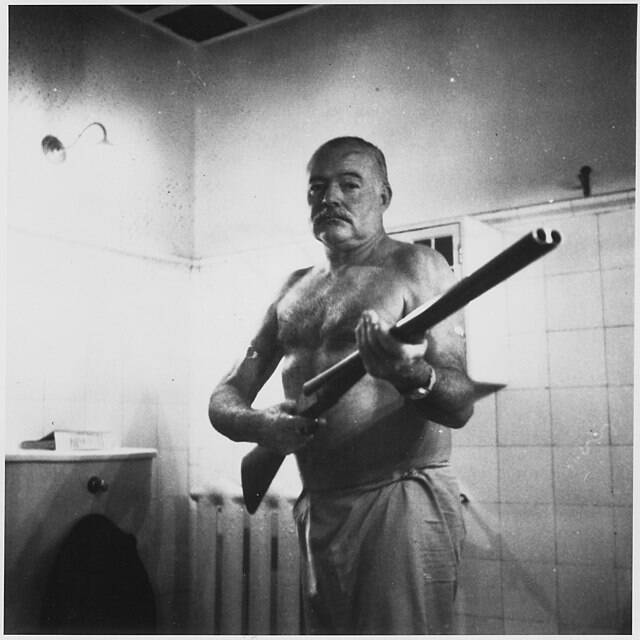 Public DomainErnest Hemingway holding a shotgun in his Cuba home. Circa 1950s.

Yet, the very next morning, just two days after returning home from the Mayo Clinic, Hemingway got out of bed around 7 a.m., put on his favorite robe, found the key to the gun cabinet his wife had tried to hide from him, took out a double-barrelled shotgun he used to hunt birds, and shot himself in the forehead.

The gunshot woke Mary, who rushed downstairs and found Ernest Hemingway dead in the foyer. She called the police and told them that the gun had unexpectedly gone off while Hemingway was cleaning it, and initial reports about his death framed it as a tragic accident.

However, there was controversial speculation that the author had died by suicide from the beginning. He had been a skilled hunter, so he knew how to handle guns, and it was unlikely he would have accidentally discharged one.

Years later, these suspicions were confirmed when Mary told The New York Times, “No, he shot himself. Shot himself. Just that. And nothing else.”

Inside The Devastating “Hemingway Curse”

In the decades following Ernest Hemingway’s suicide, multiple other members of his family took their own lives, as well. According to Biography, his sister Ursula deliberately overdosed on pills in 1966, his brother Leicester shot himself in 1982, and his granddaughter Margaux, a successful supermodel, took a fatal dose of a sedative in 1996.

Another granddaughter of Hemingway’s, Margaux’s sister Mariel, dubbed this string of mental illness and suicides the “Hemingway curse.” And in more recent years, doctors and scientists have tried to pinpoint its exact cause. 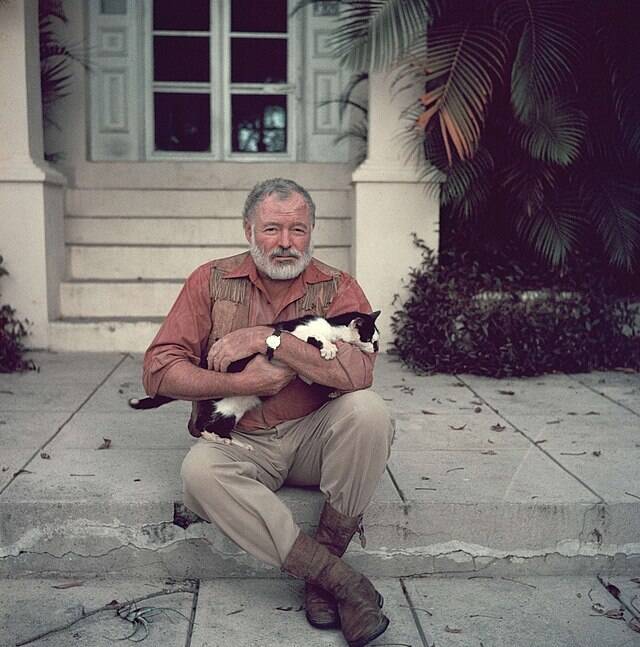 Public DomainErnest Hemingway holds one of his beloved cats, whose descendants can still be seen today at the author’s Key West, Florida home.

In 2006, psychiatrist Dr. Christopher D. Martin published a study in the Psychiatry journal stating that Ernest Hemingway had a genetic predisposition to mental illness from his parents as well as unresolved trauma and anger from his childhood.

Martin analyzed medical records, letters that Hemingway wrote over the years, and interviews by the author and his loved ones before and after his death and determined that he exhibited signs of “bipolar disorder, alcohol dependence, traumatic brain injury, and probably borderline and narcissistic personality traits.”

In 2017, as reported by Biography, another psychiatrist named Andrew Farah argued that Hemingway’s symptoms resembled chronic traumatic encephalopathy (CTE) — the same disease that plagues many football players. The author suffered multiple head injuries throughout his life, and Farah claimed that these could have contributed to his self-destructive behavior.

And yet another theory says that Hemingway suffered from hemochromatosis, a rare genetic disorder that can cause fatigue, memory loss, depression, and diabetes — all of which Hemingway struggled with. His father and brother had diabetes as well, and Leicester Hemingway even reportedly took his own life because he was facing the possibility of losing his legs from the disease.

Regardless of the reason behind Ernest Hemingway’s suicide, the author’s death was a devastating loss to the literary community and to everyone who loved him. Fans still leave bottles of alcohol on his grave in Ketchum, Idaho, and his Florida home is one of the most popular tourist attractions in Key West. Through his lauded works of literature and the descendants of his beloved polydactyl cats, the legacy of “Papa” lives on to this day.

After learning about the devastating death of Ernest Hemingway, go inside the tragic life of Gregory Hemingway, the author’s transgender son. Then, read through these 21 quotes from Hemingway’s famous works.