Scientists Just Found An Alien-Like ‘E.T. Sponge’ In The Pacific Ocean’s ‘Forest Of The Weird’

Officially named Advhena magnifica, or magnificent alien, this new glass sponge species found in the deep Pacific Ocean looks a lot like an alien from a Hollywood movie. 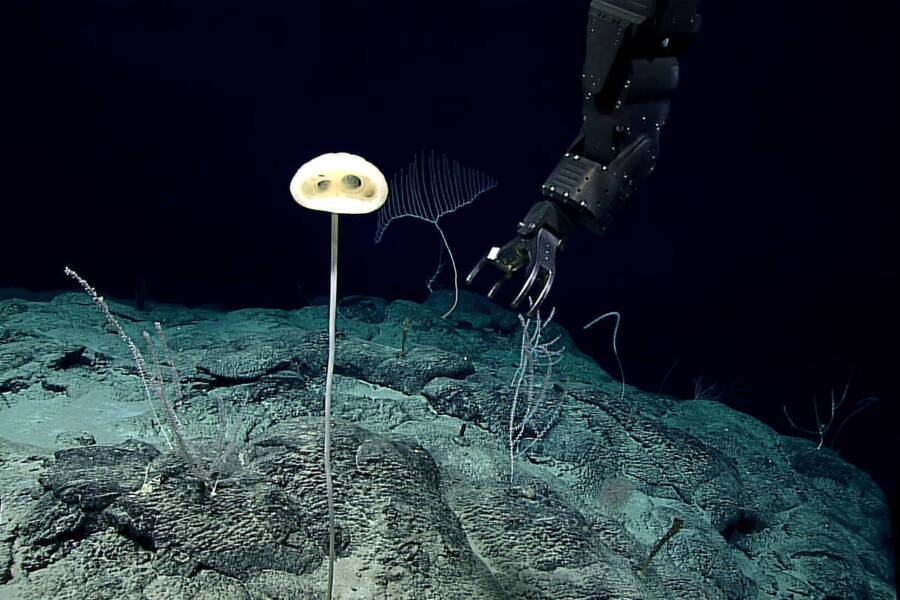 NOAAThe glass sponge Advhena magnifica which means ‘magnificent alien,’ in its natural habitat in the Pacific.

Miles into the depths of the Pacific Ocean, off the southwest coast of Hawaii, marine biologists encountered a being that looked as if it had come from space rather than the ocean floor.

A team of explorers in 2016 collected a biological sample of the peculiar sea creature which appeared to be some type of glass sponge or hexactinellid, animals that attach themselves to hard surfaces and prey on small bacteria and plankton that pass by in the waters.

But this glass sponge was especially unusual. It had an elongated thin body like a beanstalk and a bulbous head. The head had holes in the middle that looked like a pair of alien eyes.

As it turned out, it was an entirely new species and genus of glass sponge. Although the alien-like animal was given the official moniker of Advhena magnifica, its extraterrestrial appearance has scientists calling it the “E.T. sponge.”

Glass Sponge Discovered In The ‘Forest Of The Weird’ 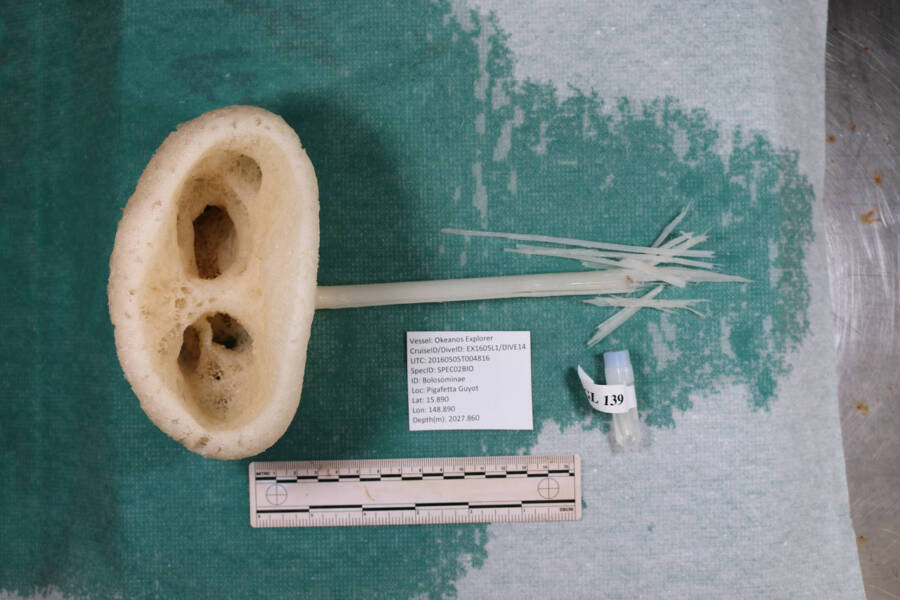 NMNHThe alien-looking hexactinellid has been nicknamed the “E.T. sponge” because it reminded scientists of the popular film.

It all began during a 2017 expedition by the National Oceanic and Atmospheric Administration (NOAA) aboard the Okeanos Explorer ship. A team of deep-ocean explorers examined a prehistoric area stretching 1.5 miles across the eastern Pacific Ocean seafloor right off the coast of Hawaii.

The landscape dates back to the Cretaceous Period between 65.5 to 145.5 million years ago and is a seabed of extraordinary species largely unknown to humans. During the expedition, the team used remotely operated vehicle (ROV) dives and performed seafloor mapping operations to better understand the underwater ecosystem.

In addition to the geological mapping of the seabed, the team also collected a wide variety of biological specimens from corals, anemones, sea stars, amphipods, and more. Among the 73 biological samples they collected, the team found roughly 44 of the specimens were likely previously unidentified species.

Forest of the Weird

While exploring "Ridge" Seamount during the 2017 Laulima O Ka Moana: Exploring Deep Monument Waters Around Johnston Atoll expedition, NOAA's remotely operated vehicle Deep Discoverer encountered this space-alien-like community composed almost exclusively of glass sponges with their concave sides directed towards the current. ..Amongst these sponges was a sponge that bore a striking resemblance to the alien from the movie, E.T.: The Extra-Terrestrial. This beautiful "E.T. sponge" has been discovered by NOAA Fisheries Service scientists to be a new genus and species: Advhena magnifica, Latin for “magnificent alien.” ..Read about the discovery here: https://oceanexplorer.noaa.gov/news/oer-updates/2020/sponge-discovery.html

The vast biodiversity that the ship’s team encountered also included a community of strange sponge-like creatures that covered the seabed. Chris Mah of the Smithsonian National Museum of Natural History (NMNH) dubbed the unusual sponge-laden seascape the “Forest of the Weird.”

These stalky sea sponges that looked eerily similar to the alien character in the film E.T. would later be identified as glass sponges and were found 7,875 feet below the ocean’s surface.

But the 2017 expedition wasn’t the first time scientists had come upon the sponge creatures. In fact, a researcher had been studying an A. magnifica sample since a year before. 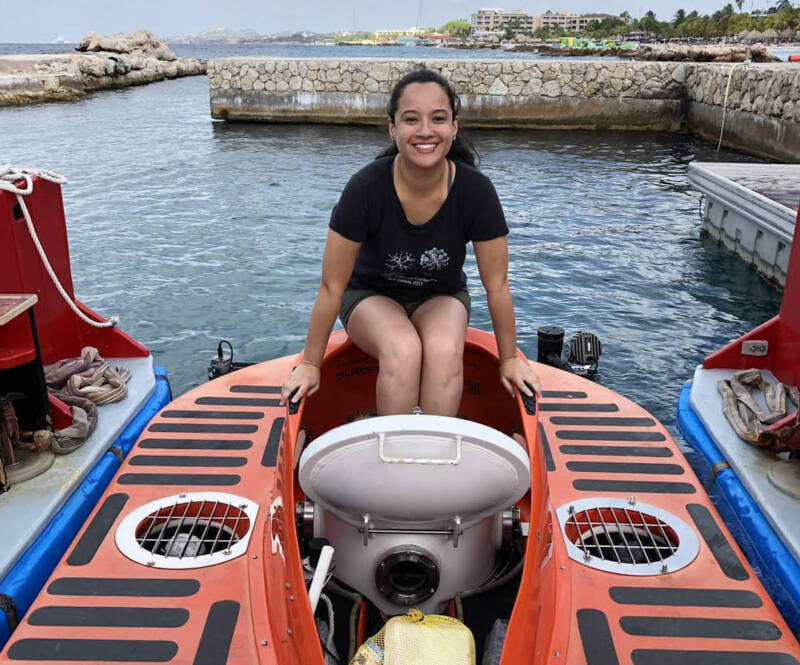 In 2016, a five-hour deep-sea expedition located miles to the west near the Mariana Trench had collected a sample of the glass sponge creature.

It was sent to the Smithsonian National Museum of Natural History (NMNH) for preservation and further study by researchers. Among the experts examining the expedition’s bounty of samples was Cristiana Castello Branco, a postdoctoral researcher working under the NOAA Fisheries National Systematics Laboratory at NMNH.

Branco was credited with the discovery of A. magnifica which many have lovingly dubbed the “E.T. sponge.”

In its natural habitat, the E.T. sponge latches onto the seafloor as if it is growing out like a bean sprout. It has a long stalky body topped off by a head featuring cavernous holes that look like eyes peering back at the observer.

Like other glass sponges, the E.T. sponge’s body contains glass-like structures called spicules that are made out of silica. These structures form a kind of outer-skeleton and give the sponges their unique, sculptural appearance.

SEM image courtesy of Cristiana Castello Branco; illustration by Nick Bezio.Using an electron microscope, scientists created the image on the left showing the sponge’s spicules in detail. Because the spicules can be very delicate, an artist created the rendering on the right to flesh out the full structure.

Branco said she first came upon the unidentified hexactinellid species while researching various Bolosoma, a type of genus that was the focus of her postdoctoral thesis. But she quickly realized that the peculiar-looking sponge sample bore no resemblance to any other known hexactinellid species.

After it was confirmed to be a new species and new genus of glass sponge, Branco had the honor of naming the creature. The new species was announced in July 2020.

“We usually try to associate the name to something unique about that species, or we can honor someone, the expedition name, or a locality,” Branco explained of her name choice. “In the case of Advhena magnifica, the shape of this sponge is reminiscent of an alien, like in the movies, with what looks like a long thin neck, an elongated head, and huge eyes.”

Advhena, Branco explained, was from the Latin word advena which means alien but in the sense of a visiting stranger or foreign being rather than extraterrestrial, though the creature’s appearance certainly lives up to that definition as well. Thus, the remarkable sea creature was named “magnificent alien.”

“While we haven’t ‘officially’ given it a common name in our paper, ‘E.T. sponge’ seems to fit,” Branco said.

Now that you’ve learned about this fascinating new hexactinellid species, check out the ‘hairy sea monster’ with no head or eyes that washed up on a Russian beach and take a look at this mind-bending jellyfish species captured shape-shifting at 2,500 feet below the Pacific.