From 1943 to 1945, a civilian task force of 345 Allied academics known as the Monuments Men managed to save 5 million cultural relics.

During World War II, countless artifacts, paintings, and sculptures from European history’s most prominent creators were seized by the Nazis. Fortunately, many of those stolen works — which are worth billions of dollars — were recovered through the courageous efforts of a civilian-military unit known as the Monuments Men.

The Monuments, Fine Arts, and Archives corps was a small collaboration of Allied historians, architects, museum curators, and professors, most of who were middle-aged men with no experience in war. Yet, they worked tirelessly through covert and highly dangerous mission to retrieve millions of priceless relics.

Their courageous efforts were celebrated in the 2014 film, Monuments Men, which depicted how this ragtag crew of academics managed to salvage masterpieces held hostage by the Nazis. This is their unbelievable true story.

The Rise Of The Reich And Art Theft 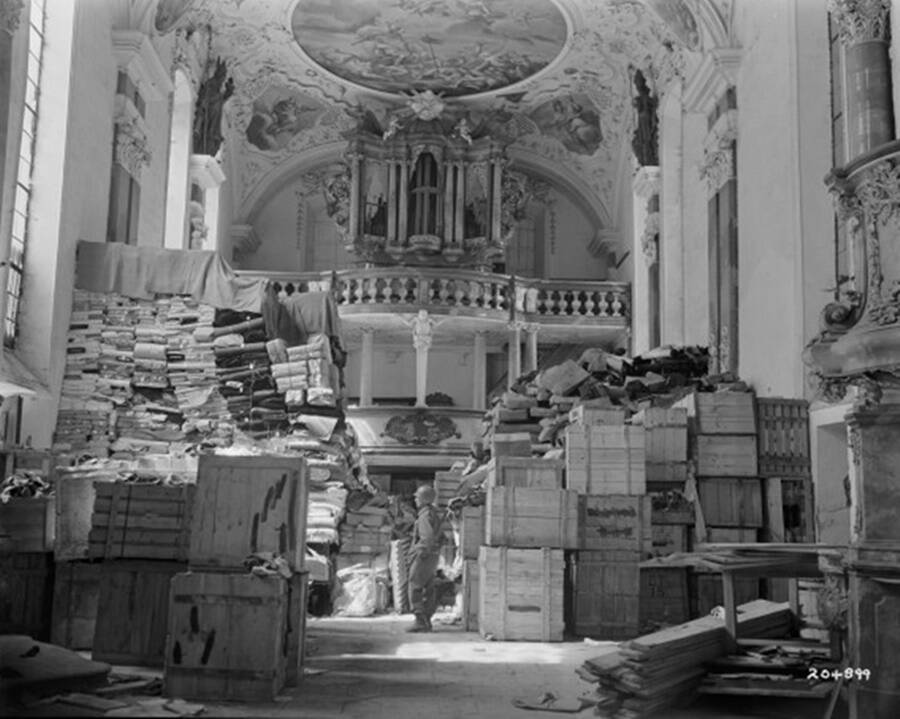 National ArchivesNazi-looted artworks that were stashed inside a church in Ellingen, Germany.

Destruction and chaos descended upon Europe on Sept. 1, 1939, as Nazi Germany invaded Poland. France and the United Kingdom declared war on Germany as the Nazis efficiently plundered every inch of Europe. By 1941, the continent was largely under the control of Germany and its allies Italy and Japan.

Among the dead, destroyed, and deported, were precious artworks. Bombing had destroyed museums, galleries, and moreover, the rightful owners of these historic pieces. The Nazis did not hesitate to loot and steal them.

Before he became the tyrannical leader of Germany, Adolf Hitler was an aspiring artist. Though he was rejected from an art school as a young man, he continued to admire art and to paint on his own.

He wanted to build a private museum called the Führermuseum to house the world’s most valuable works right in his hometown of Linz, Austria. So confident was he about amassing a renowned art collection that he listed the Führermuseum — which was yet to be realized — as the heir to his own artworks in the event of his death. 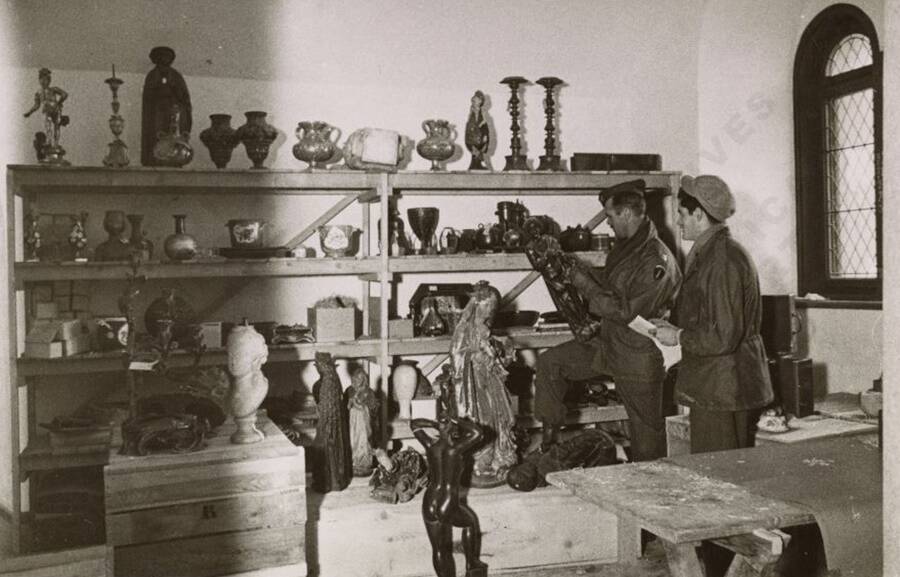 Thomas Carr Howe/Archives of American ArtArtifacts stolen by the Nazis discovered in the famous Neuschwanstein Castle in Germany.

As World War II raged, Hitler’s commanding generals began to steal art en masse. They formed the Einsatzstab Reichsleiter Rosenberg (ERR), an outfit that was explicitly tasked with the systematic looting of art and cultural artifacts across Europe.

The Parisian museum, Galerie Nationale du Jeu de Paume, was designated as the central storage unit for all the treasures that the Nazis plundered. But the Nazis also hid their loot in salt mines across Germany and Austria.

Their precious booty included works by master artists Rembrandt, Picasso, Matisse, Johannes Vermeer, Van Gogh, and countless others. The collection even included famed works like Michelangelo’s sculpture, Madonna and Child. They were all pillaged from city museums, public galleries, and private collections.

Hermann Göring, Hitler’s right-hand, visited the Jeu de Paume in Paris 20 times to shop for the masterpieces he desired most. He wound up taking two railroad cars full of art for himself alone. 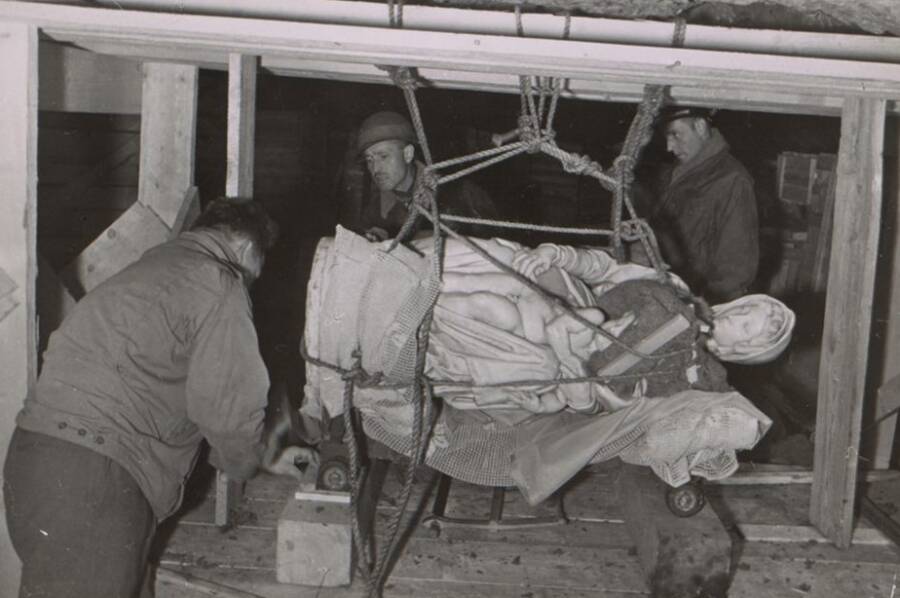 Thomas Carr Howe/Archives of American ArtMonuments Men carefully prepare Michelangelo’s “Madonna and Child” sculpture to be transported out of the salt mines in which it was stashed.

In order to protect cultural artifacts from the ravages of the war, a special task force was formed called the Monuments, Fine Arts & Archives Section (MFAA) of the Allied Expeditionary Forces.

Nicknamed the Monuments Men, the unit was responsible for protecting cultural relics like churches and museums, assessing damaged art inside demolished cities, and initiating restoration projects. This was the first time in history that a brigade was arranged with the specific aim to protect the world’s art.

The Monuments Men were not trained soldiers. They were art curators, collectors, academics, and historians who committed their lives to the recovery of Europe’s artwork — two of them were even killed in combat while protecting artwork.

As the war progressed, however, their duties expanded to documenting and retrieving those works stolen by the Nazis or preventing their capture in the first place. One of their biggest successes was keeping the Mona Lisa” from falling into Nazi hands by expertly hiding it across various homes in the French countryside. 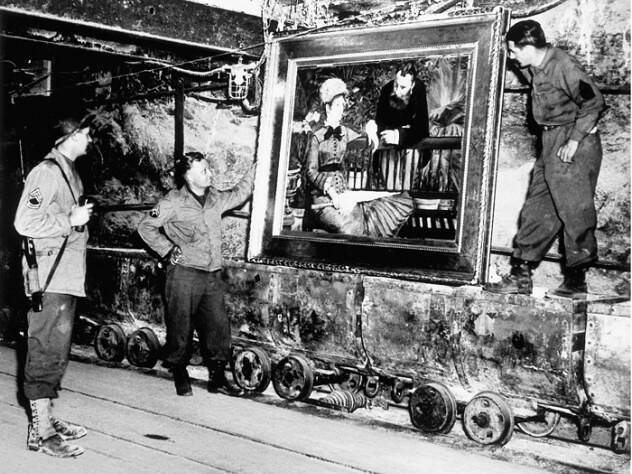 FlickrAmong the masterpieces recovered by the MFAA was Édouard Manet’s In The Conservatory, seen here as it was found in a German salt mine in 1945.

“We were charged with much more than we could encompass,” Sgt. Harry Ettlinger said during an interview for the 2007 documentary adaptation of the book Rape Of Europa.

“We had no trucks, no jeeps. Nothing but our shoes. And no support of any kind from officialdom.”

As Charles Parkhurst, Deputy Chief of the Monuments Men, explained of their mission: “There was lots of German art hidden where they thought it would be safe during the fighting… And it was our duty to search, and find, and save.”

Among the group’s most notable members was Rose Valland, an art curator and the only member of the staff at the Parisian Jeu de Paume museum that the Nazis kept on after they took it over.

The Nazis were unaware that Valland was fluent in German and that she eavesdropped on them. She’d then pass along their plans to the French resistance. She also worked closely with the Monuments Men to identify artworks stolen from France. 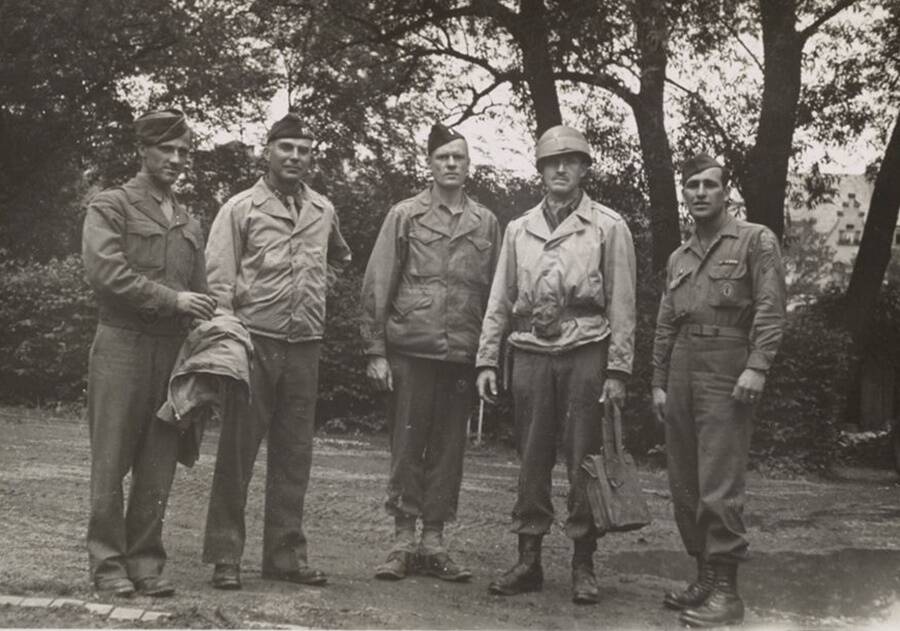 Thomas Carr Howe/Archives of American ArtGeorge Stout (third from left) poses with other members of the Allied art rescue unit.

Another invaluable member of the Monuments Men was George Stout, a World War I veteran and Harvard art conservator who pioneered new techniques of conservation.

Stout joined the Monuments Men in December 1944 and was involved in one of the biggest operations they performed: the art rescue at Altaussee.

Between 1943 and 1945, the Nazis cached their extensive collection of stolen art in a network of mines across Germany and Austria in Altaussee, Merkers, and Siegen.

The Allied forces caught wind of the cache on a chance tip dropped by a German soldier who had worked under Göring while transporting stolen art to the mines.

Temperature conditions in the mines were consistently between 40 and 47 degrees Fahrenheit with 65 percent humidity, making them the perfect environment in which to hide valuable art.

The Nazi treasure trove was enormous. In the Mekers salt mine alone, U.S. officials found 30 miles of galleries and over one billion euros in Nazi gold. In the Altaussee mine were at least 6,577 paintings, 2,300 drawings, 954 prints, and 137 sculptures. Among these were Michelangelo’s sculpture, “Madonna and Child,” and Jan van Eyck’s “The Adoration of the Lamb.” 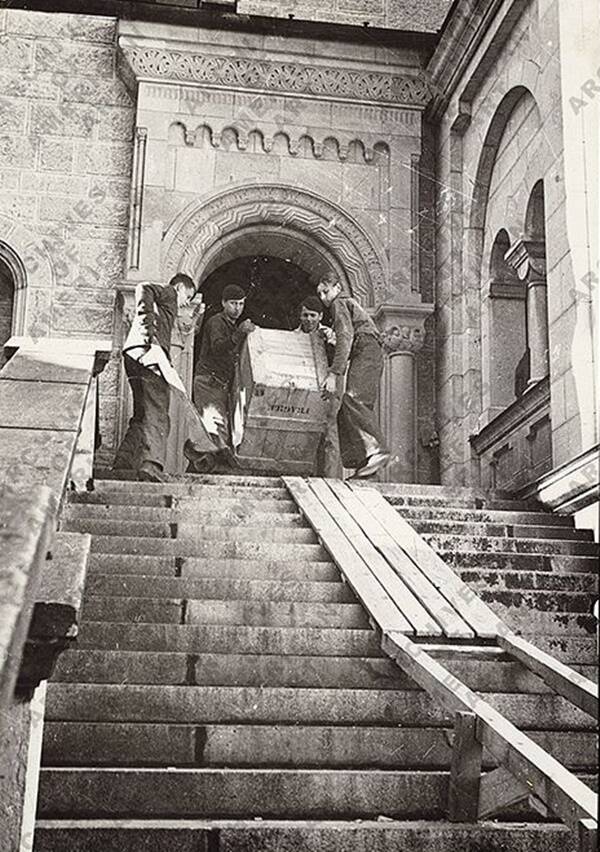 Pfc. Lincoln Kirstein later wrote of his surreal experience seeing Van Eyck’s masterpiece inside a salt mine, “The miraculous jewels of the Crowned Virgin seemed to attract the light from our flickering acetylene lamps… Calm and beautiful, the altarpiece was, quite simply, there.”

In total, the Monuments Men recovered $3.5 billion worth of art from the Altaussee salt mine alone.

The Legacy Of The Monuments Men 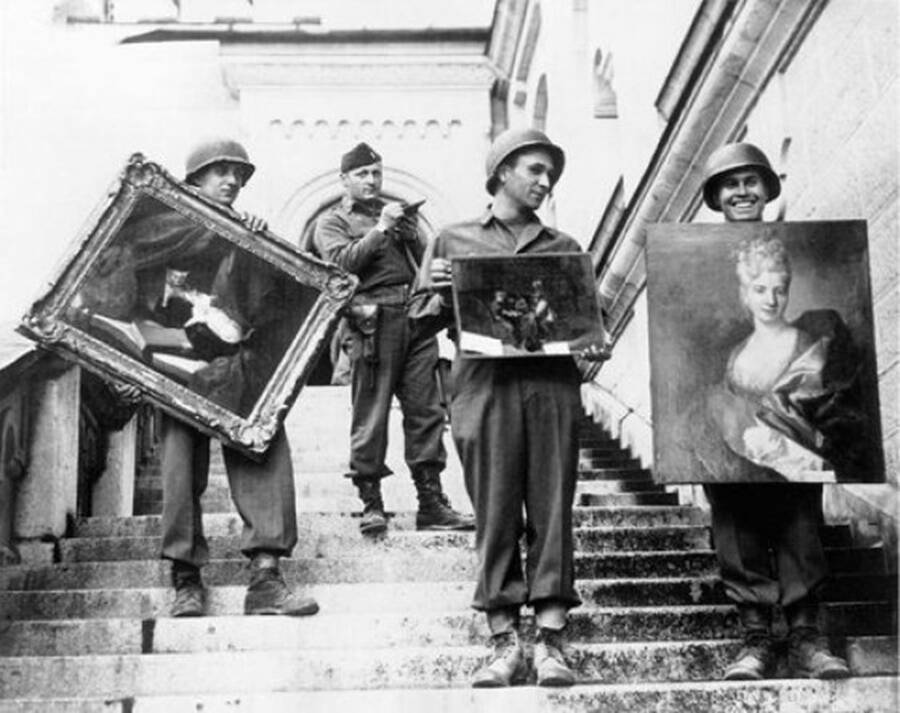 Despite the work of the Monuments Men through the end of the war, there are still thousands of priceless pieces missing today. These historical artifacts were most likely destroyed in the war though some of them possibly remain hidden away.

Raphael’s Portrait Of A Young Man painting, estimated to be worth hundreds of millions of dollars, is among the valuables still missing. 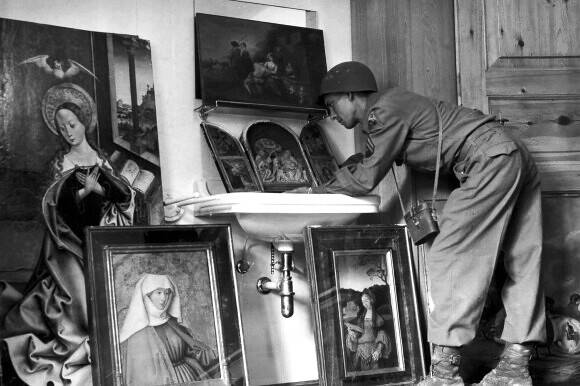 FlickrA Monuments Man leans over a collection of recovered paintings.

The work of the Monuments Men went nearly forgotten among mainstream consciousness until 2014’s action-comedy, The Monuments Men. The film starred George Clooney, who also signed on as the director, Bill Murray, and Cate Blanchett. The movie received worldwide attention from modern audiences, many of who were introduced to the Monuments Men for the first time.

The movie was written based on the book, The Monuments Men: Allied Heroes, Nazi Thieves, and the Greatest Hunt in History, by Robert M. Edsel. The film takes a number of artistic liberties, however. 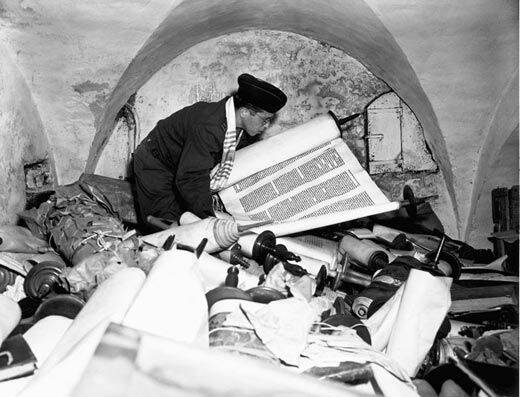 National ArchivesA Monuments Man rifles through a collection of stolen Torahs at the Offenbach Collecting Point.

Chief among them is how the Monuments Men came to be. According to the movie, the special unit was conceived following the urging of Frank Stokes, Clooney’s character who is based on the real-life figure of George Stout.

Although Stout is considered one of the first to campaign for a task force to protect art during the war, the formation of the original unit was eventually done without his direct input. 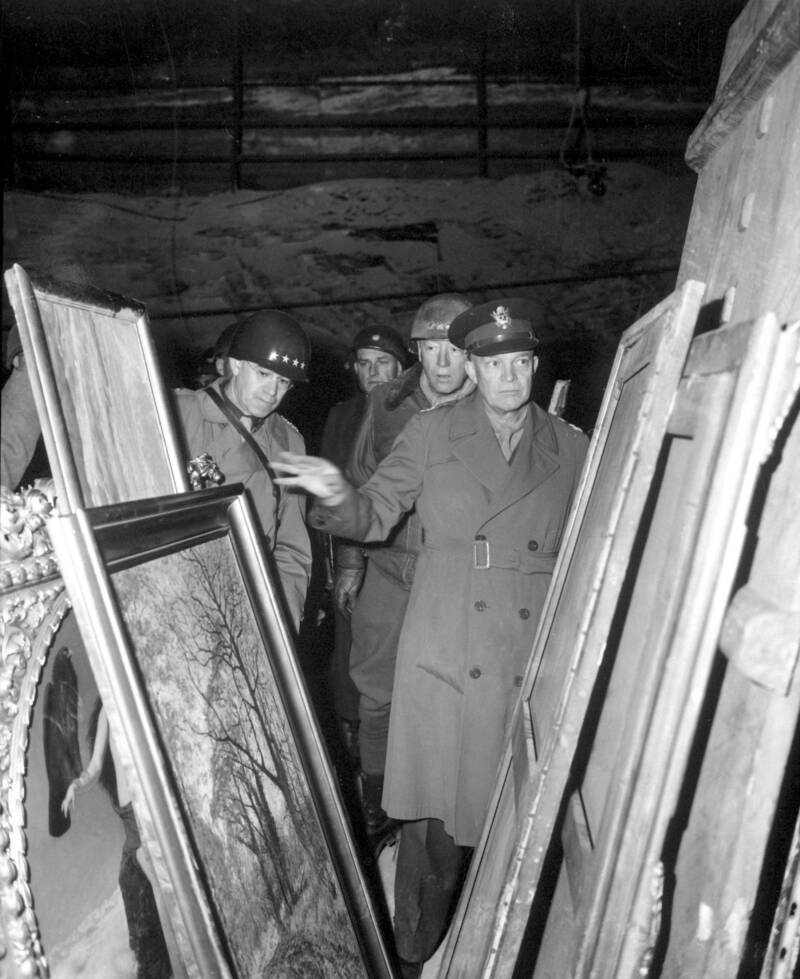 There was also no romantic entanglement between Rose Valland (played by Blanchett) and James Rorimer, the real-life figure who inspired Matt Damon’s character, James Granger. The two did cultivate a close relationship during their work with the Monuments Men but it was strictly professional.

Nevertheless, the film still delivers the most important message of all: that without the men and women of the MFAA, many of Europe’s most prized artifacts would have been lost forever.

Next, see how a priceless 17th-century Caravaggio painting was found behind mattresses in an old French attic. Then, read the true story of Artemisia Gentileschi, the Baroque master painter who took revenge on her rapist through her art.