Broadway and silent movie star Justine Johnstone got tired of the shallow roles she was offered, so she set her sights on medicine instead. 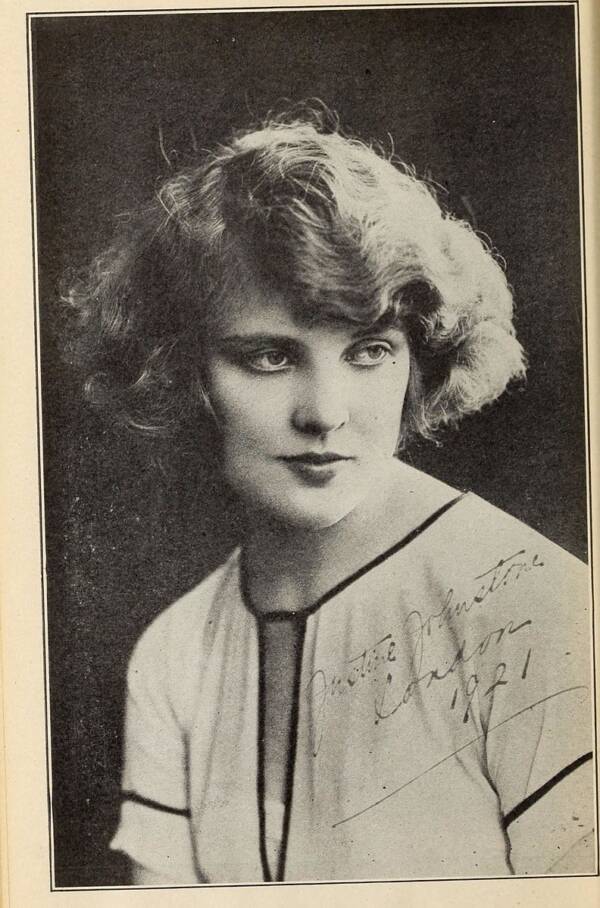 Justine Johnstone’s good looks made a splash on Broadway and in silent films of the 1910s and 1920s.

Starstruck classmates remembered that “her air had a meaning, her movements a grace.” The press dubbed her “the most beautiful woman in the world” and declared that “every flapper in New York seems to be imitating Justine Johnstone’s…[voice].”

With cool Nordic looks and a boarding school education, the Broadway and silent film star seemed to have everything a girl could want. But like fellow starlet-turned-scientist Hedy Lamarr, her beauty blinded people to her brilliance.

Though famous for her pretty face, this star of the stage and screen actually helped rewrite modern medicine as we know it with her research on the IV drip.

An Early Life Of Poverty

Justine Johnstone was born Gustina Johnson in 1895 to a poor Scandinavian immigrant family in New Jersey. She later described her mother and father as “stern parents of Viking ancestry.” 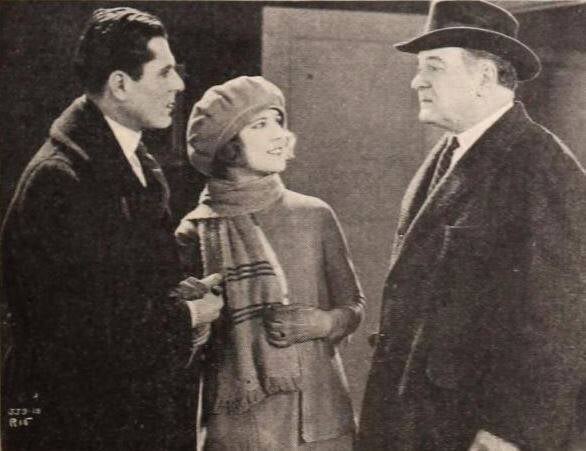 Despite their severity and poverty, Johnstone grew up in a household that honored the written word and the stage. The future actress lived in the melting pot of Hoboken, a cosmopolitan theatre capital just across the Hudson from New York City’s many stages.

Acting was in her blood, and on her mind as a child. In The Lives of Justine Johnstone: Follies Star, Research Scientist, Social Activist, writer Kathleen Vestuto quotes Johnstone: “When I was a child, I used to write plays in which my little chums and I acted. I hoped one day to write a real play.”

But she nursed another dream: academia.

“A cherished wish was to become — what do you think? — a librarian! But librarians can’t jump and dance all the time the way I like to do.”

Little did she know that fate would lead her to excel in both performing and academics.

But first, Justine Johnstone had to make a living, and her Nordic face and statuesque bearing commanded a fair price as a model — around $7 a week, a large sum for a young girl in that era. One day as she was shuffling back and forth from Hoboken to Manhattan, the poor immigrants’ daughter with the angelic face was discovered by Broadway press agent Walter Kingsley. 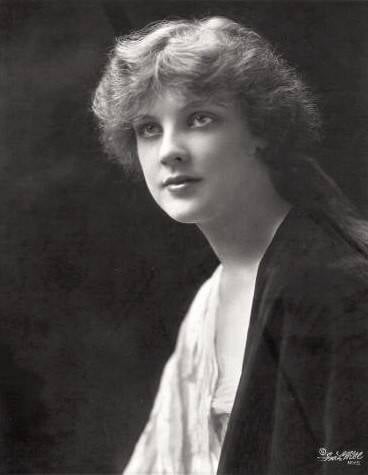 At Kingsley’s advice, she took on the stage name Justine Johnstone. In 1910, she got her start on stage at 15 years old, with a small part in a Broadway show called The Blue Bird. She dropped out of high school and moved on to perform in Hell/Temptations/Gaby in New York’s Folies-Bergère in 1911. This was a big gig: the price of admission to the Folies-Bergère was second only to the Metropolitan Opera.

Despite the attention Johnstone received as a ravishing chorus girl, the experience proved somewhat hollow. The show flopped, and she decided to rearrange her priorities and finish her education.

Justine Johnstone next set her sights on the Emma Willard School. A haven of blue-blood learning in upstate New York, the school suited the young actress with an air of quiet sophistication very nicely.

Her fees were paid by an older gentleman friend, though Johnstone swore it was a platonic arrangement. 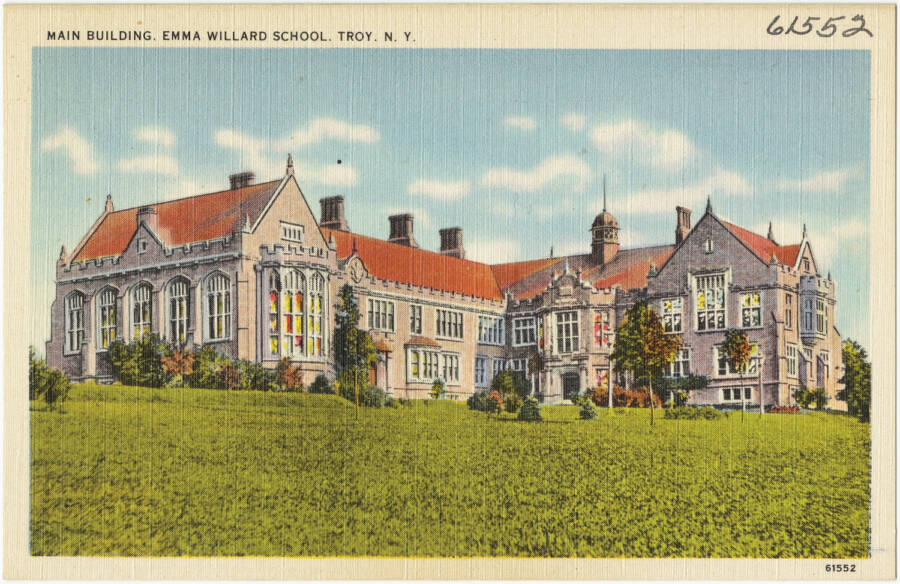 A few parents of the well-heeled students raised eyebrows that the Broadway dancer was joining their daughters’ ranks. But by all accounts, she was beloved by her peers in the class of 1914, who affectionately called her Ju-Jo.

After completing her education, Johnstone went back to acting. But her time at Emma Willard had firmed up Johnstone’s formal education, laying the groundwork for her future studies.

Johnstone returned to Broadway, commanding $75 a week in the Ziegfeld Follies and often sharing the stage with another future film star, Marion Davies. In 1917, producer Lee Schubert created a revue called Over the Top with a lead role written just for Justine, who had become known as “the girl who owns Broadway.”

During her days in the Follies she uttered one of her most prescient comments to a theatre critic: “As soon as a girl is called a beauty it is assumed that she has no brains.”

Not satisfied with stage roles that she felt relied more on her looks than her talent, Johnstone set her sites on the screen. She broke into pictures in the 1920s, in films like Blackbirds, Never the Twain Shall Meet, and Nothing But Lies. 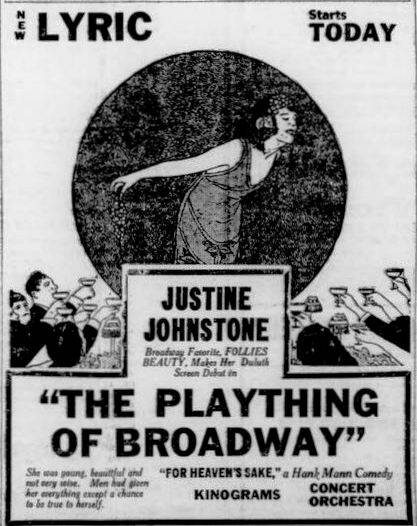 Duluth HeraldIn 1921, Justine Johnstone starred in the silent film, The Plaything of Broadway.

She would prove misguided perceptions of her intelligence wrong soon enough, but first Johnstone got married to a Hollywood producer.

Her Marriage To Walter Wanger And Time At Columbia University

Justine Johnstone first met her husband Walter Wanger during her Ziegfeld days, when he worked as a producer’s assistant. The two kept up correspondence during WWI when Wanger served as an aviator.

After his return from the war, they married in New York City Hall in 1919. Cosmopolitan Johnstone officially became Mrs. Justine Wanger, the name which she’d later use in her scientific career. 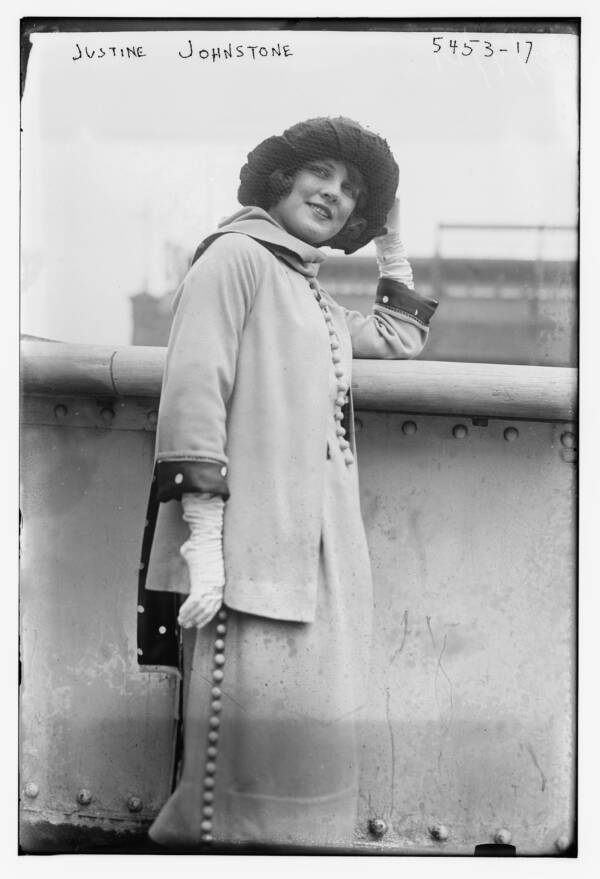 In 1920, Wanger took a job at Paramount and began to climb the ladder as a movie producer. During his long career, he would work on films like The Sheik (1921), Stagecoach (1939), and Cleopatra (1963), and serve as president of the Academy of Motion Picture Arts and Sciences.

As Wanger’s star was rising, Johnstone announced her retirement from acting in 1926. The beautiful star was unhappy with the lack of depth in the roles available to her. And her husband’s casting couch antics and predilection for young actresses only made matters worse. To escape from these woes, Johnstone found solace in another old love: learning.

Johnstone had formed a friendship with her husband’s doctor Samuel Hirschfeld. In 1927, at Hirschfeld’s urging, she began auditing classes at the Pharmacology Department of Columbia University’s School of Physicians and Surgeons. Soon the courses at Columbia turned into a job as an assistant in the laboratory, where she worked with Hirschfeld and Dr. Harold Thomas Hyman.

Their work focused on the phenomenon of “speed shock” in injections, which occurs when medications injected into the bloodstream have deadly effects if introduced too quickly. With Hirschfeld and Hyman, she co-authored the 1931 paper “Influence of Velocity on the Response to Intravenous Injections,” positing a safer slow-drip method.

Their research would lead to the modern IV drip and a pre-penicillin treatment for syphilis. When news of her new career in medicine reached the press in 1941, reporters clamored to interview Johnstone, who refused all of them.

Though the press viewed her transition from screen siren to scientific researcher as an exotic phenomenon, Johnstone saw herself as an ordinary working woman. And after her early fame, the retired movie star treasured her privacy. 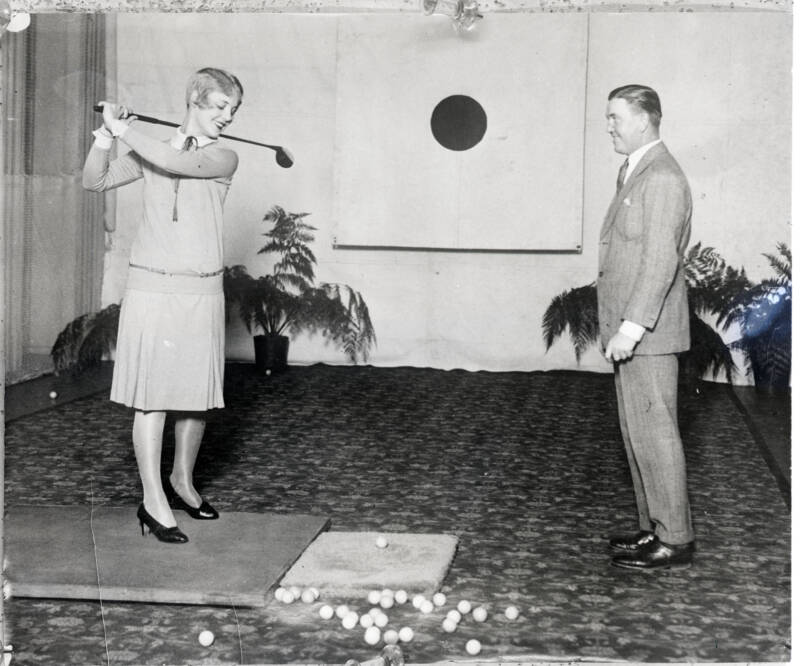 Getty ImagesJohnstone became very private in her later years and even requested no obituaries upon her death.

In 1931, Justine Johnstone left New York, following her husband to LA for his new job at Columbia Pictures. But her scientific work didn’t stop. She continued to research disease cures at Caltech, joined independent studies for cancer research, and was renowned as an expert on syphilis.

After several unhappy years, she and Wanger divorced in 1938, though she continued to work under the name Justine Wanger. She made a rare public comment then, telling the New York Times that Wanger was, “abrupt, surly, and discourteous.”

As a single woman, she adopted two sons whom she raised on her own. A 1941 article in Independent Woman magazine described her during this time as, “white-haired, serene, and happy.”

As a feminist, she would fight against the blacklist in the ’50s and for women’s political equality all her life, all while maintaining a very guarded private life. She died in 1982 in Los Angeles from congestive heart failure at the age of 87. By her request, there were no obituaries. 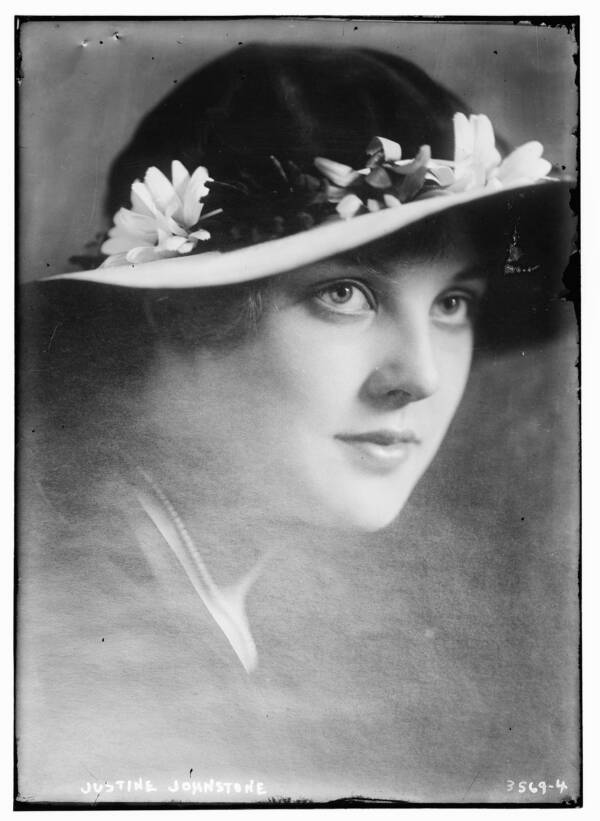 From showgirl and film star to pioneering researcher and single mother in the early 20th century, Johnstone lived many lives. She’s often remembered only as one of the most beautiful women of her era, but her life was much richer than that.

She famously said, “Doing something, and doing it well…is a joy.” If so, the joy Justine Johnstone found in her 87 years must have been profound.

Now that you’ve learned about Justine Johnstone’s incredible life, read up on Hedy Lamarr, the Hollywood actress who invented technology that made WiFi possible. Then, get to know Dolores Hart, the starlet who left movies behind to become a nun.