The Story Of Marion Davies, From Silent Film Star To ‘Citizen Kane’ Punchline

A member of the Ziegfeld Follies and a box office star in the 1920s, Marion Davies's legacy was overshadowed by her extramarital relationship with William Randolph Hearst.

In the Roaring Twenties, Marion Davies was a superstar. Appearing in nearly four dozen films, both silent and “talkies,” Davies was everywhere. But many didn’t believe that she achieved her fame due to talent alone.

Davies was known for being the mistress of William Randolph Hearst — businessman, politician, and most notably, newspaper publisher.

A man with tremendous power, Hearst was even rumored to have started the Spanish-American War by printing a slew of provocative articles. It’s no wonder, then, why some believed that he built Davies’ career.

It didn’t help that Marion Davies enjoyed a lifestyle that was largely considered scandalous. She was also rumored to have had affairs with other men in Hollywood, including Charlie Chaplin and a producer named Thomas Ince, who died after a weekend on Hearst’s yacht. 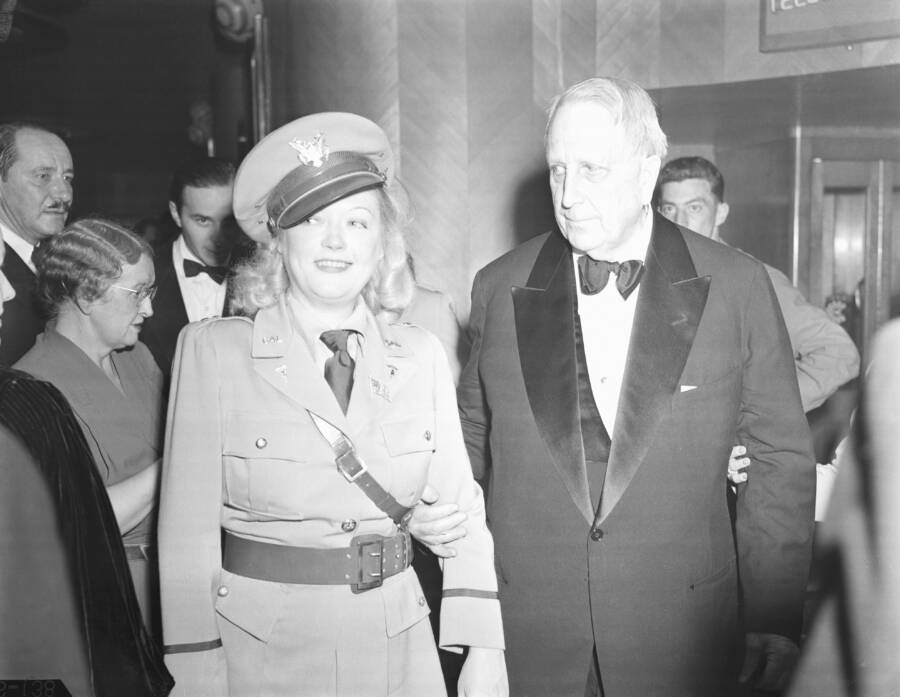 Bettmann/Getty ImagesWilliam Randolph Hearst and Marion Davies at the California State Guard Military Ball at the Hollywood Palladium in 1942.

But what caused the most damage to Davies’ reputation was her alleged portrayal in the 1941 film Citizen Kane, which has often been called the greatest American movie of all time.

Davies was assumed to have been the inspiration behind the character Susan Alexander, the untalented mistress of the media mogul Charles Foster Kane (who was allegedly based on Hearst). Thus, Davies garnered a reputation as a trifling, vapid actress buoyed only by her connection to Hearst.

The real story of Marion Davies is more complicated than that. But like other notable women of her time, she was in a precarious position as she stood beside a powerful man. As such, an ocean of chance encounters, deadly incidents, and controversy followed her wherever she went.

The Early Years Of Marion Davies 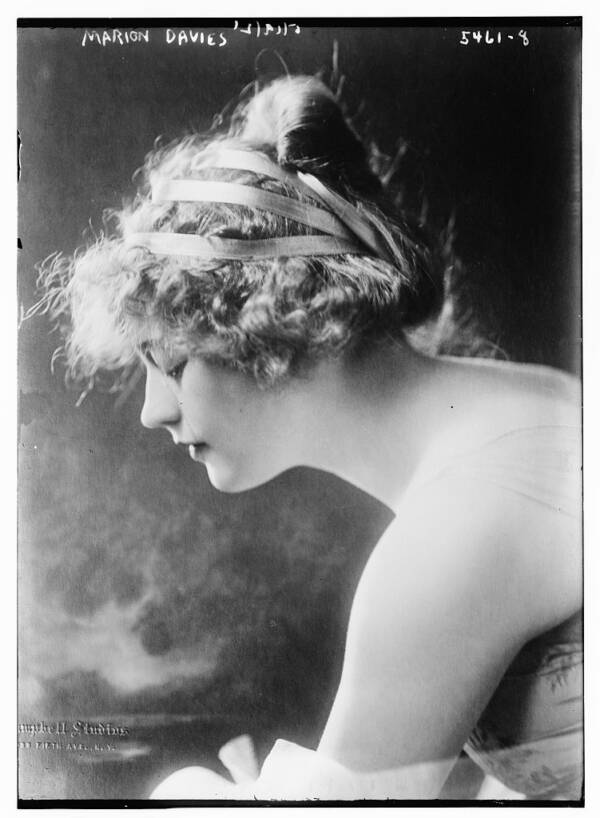 Library of CongressMarion Davies was a gifted comedienne, but Hearst tried to transform her into a more serious actress.

Marion Cecilia Douras was born on January 3, 1897, in Brooklyn, New York. She was the youngest of five children.

Her father, Bernard J. Douras, was a New York City magistrate and a lawyer. Her mother, Rose Reilly, tended to the home. At some point, the family chose to change their surname from “Douras” to “Davies.”

Davies was educated in a convent, but she dropped out to pursue a career in show business instead. She got her start as a chorus girl on Broadway.

By 1916, she was signed on as a main player in Broadway’s Ziegfeld Follies, a series of theatrical productions.

That’s how Marion Davies first caught the eye of the historic media mogul and business tycoon William Randolph Hearst. It didn’t take long for the pair to start a relationship — despite the fact that Hearst was already married.

The Rise Of Marion Davies 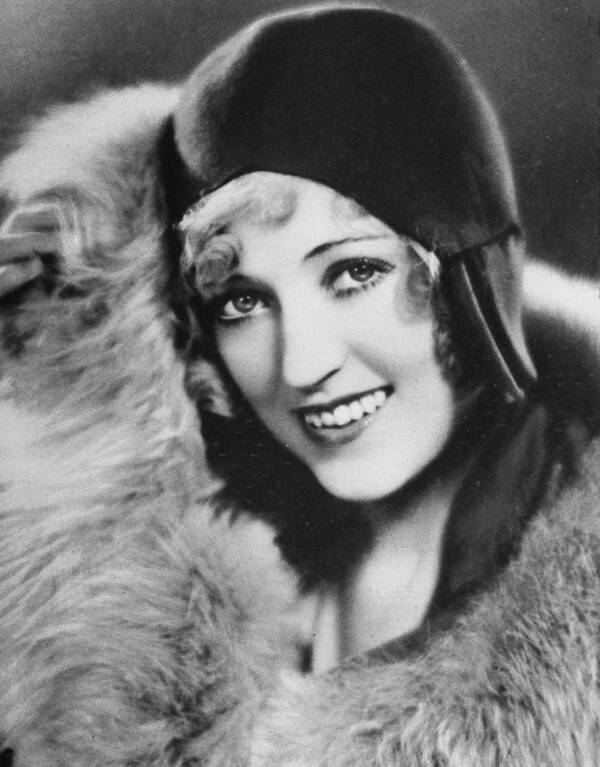 It is widely believed that Marion Davies’ extramarital affair with Hearst gave the upcoming talent her start in Hollywood.

Davies’ filmography would span over two decades, beginning shortly after she and Hearst started dating. Rather than have her audition for bit parts, Hearst simply established a movie studio and employed her as one of its permanent installments.

While starring in several films doesn’t necessarily ensure success, having a partner in charge of national and local news can certainly be a huge advantage. Hearst ordered that all of his papers give Davies positive reviews whenever she starred in a new project.

However, the young actress was an actual talent. Not only did she star in two of the greatest comedies of the Roaring Twenties, The Patsy and Show People, she helped produce films as well. It’s largely agreed that the actress had a knack for show business — regardless of her link to Hearst.

A scene from Five and Ten, where Marion Davies showcased her dramatic skills after transitioning from silent films to talkies.

Even when films transitioned from silent to “talkies,” Davies managed the change despite suffering from a slight stutter.

“I couldn’t act,” Davies wrote in one of her memoirs. “But the idea of silent pictures appealed to me because I couldn’t talk either.”

It was 1922’s When Knighthood Was in Flower that firmly established Davies as a superstar. Not only was it considered the most expensive motion picture ever made up to that time, it also became a box office success.

However, not everything was as rosy behind the scenes, as dating William Randolph Hearst had just as many disadvantages as it had advantages.

Her Relationship With William Randolph Hearst 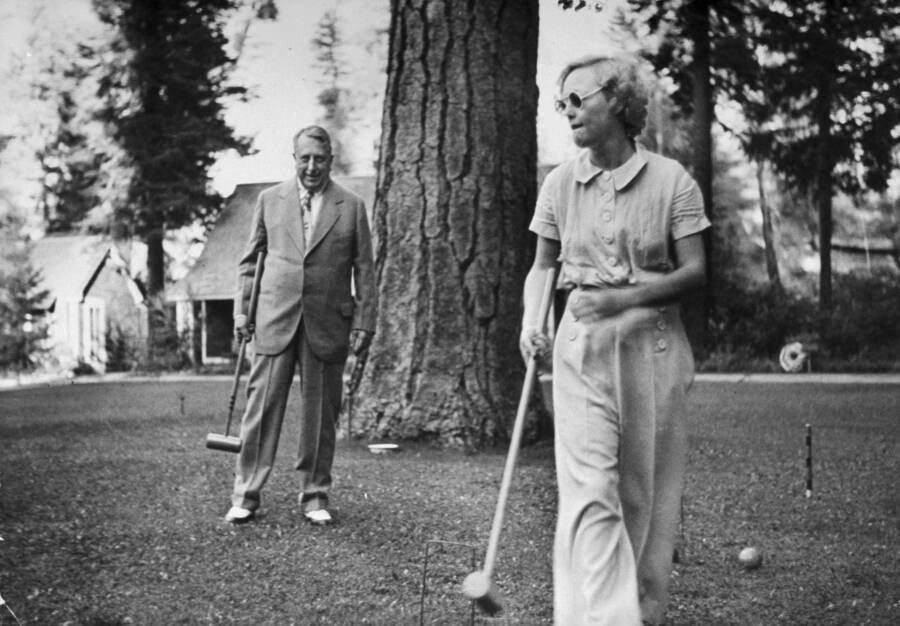 While Marion Davies shined in comedic roles, Hearst was desperate to transform her into serious actress. Unfortunately, his ruthless behavior with studio heads at places like Metro-Goldwyn-Mayer eventually cost her a career. Nonetheless, Davies still adored him.

“God, I’d give everything I have to marry that silly old man. Not for the money and security — he’s given me more than I’ll ever need. Not because he’s such a cozy companion, either… No, you know what he gives me, sugar? He gives me the feeling I’m worth something to him.”

However, William Randolph Hearst remained married to his wife. While the pair eventually became estranged due to Hearst’s increasingly open relationship with Davies, Hearst’s wife apparently refused to accept a divorce.

On top of that, rumors circulated at one point that Davies was having an affair with Chaplin. Although Hearst believed that Davies was involved with another man, he actually thought that she was seeing the film producer Thomas Ince instead. 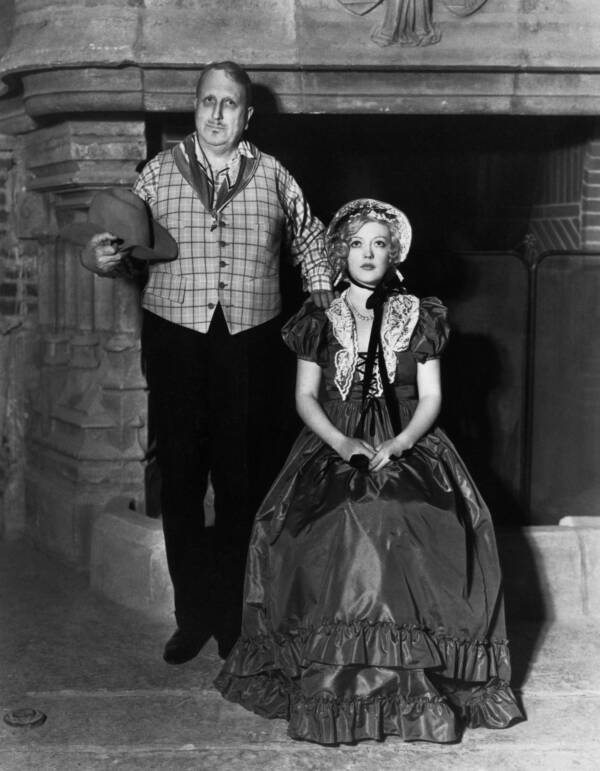 In November 1924, shortly after returning from a weekend party aboard Hearst’s yacht, Ince died under mysterious circumstances. Some suspected that Ince had been poisoned by Hearst, but his autopsy later showed that he’d died of an attack of acute indigestion.

Apparently, he had been keeping his failing health, ulcer, and heart troubles to himself, and died in his Hollywood home. But despite the autopsy, his death still caused a scandal as rumors continued to swirl that he had been murdered by Hearst due to a fight over Davies.

But as bad as that was for Davies’ reputation, arguably no scandal hurt her quite as much as her alleged depiction in Citizen Kane.

Citizen Kane And The True Story Of Mank

Orson Welles’ masterpiece, Citizen Kane, is said to feature a character that was loosely based on Marion Davies. If true, it’s a terribly unflattering portrayal. The character named Susan Alexander is primarily known for being the mistress of media mogul Charles Foster Kane. Although Alexander is depicted as beautiful, she is also supremely untalented.

The fictional character of Susan Alexander quickly sparked a barrage of ridicule for the real-life Davies. Meanwhile, Hearst’s movie gossip columnist, Hedda Hopper, saw the film and told him that he was portrayed blatantly and horribly as the main character in the movie.

The tycoon subsequently ordered his papers to never mention the film — and to discredit Welles whenever possible.

But screenwriter Herman J. Mankiewicz — whose work on Citizen Kane was recently depicted in David Fincher’s movie Mank — claimed that Kane was not inspired by Hearst. However, few believed him, especially since the movie features a few quotes from the Hearst mythology, including this one: “You provide the pictures, we’ll provide the war.” 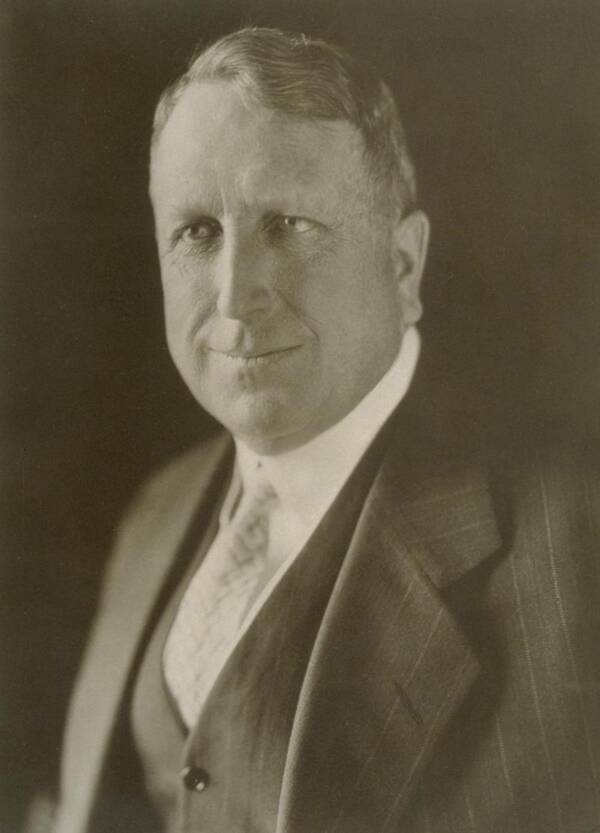 Wikimedia CommonsSome believe it was the use of the word “Rosebud” in Citizen Kane that angered Hearst the most.

Some, including the legendary American writer Gore Vidal, believed that Kane’s infamous use of the word “Rosebud” was a reference to Hearst’s pet name for Davies’ “tender button.” This, above all, was what reportedly infuriated Hearst the most about the movie.

It’s no wonder why the universally lauded film lost money at the box office and was largely snubbed at the Oscars. 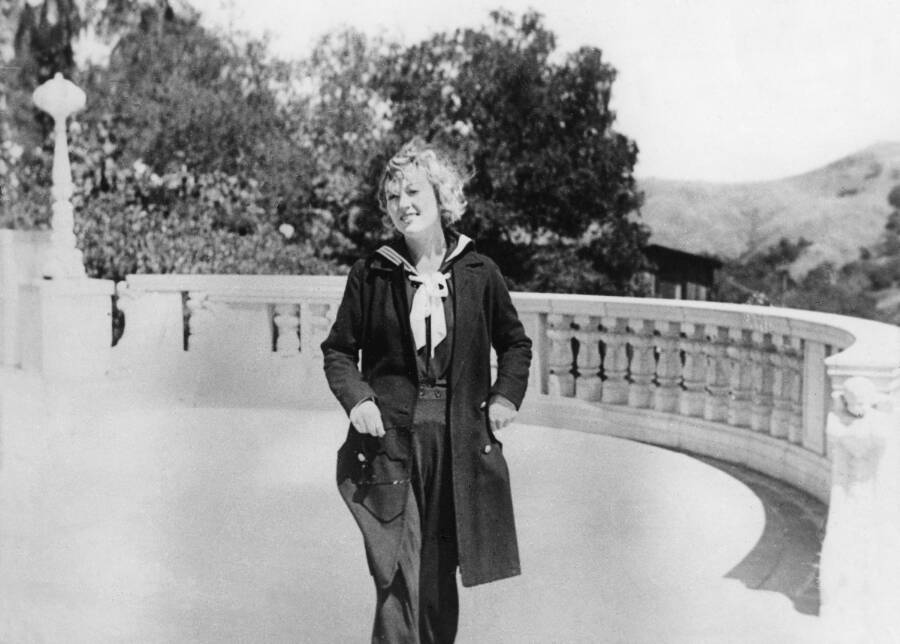 BPK/Salomon/Ullstein Bild/Getty ImagesMarion Davies taking a morning walk in sailor’s regalia. She stood by Hearst until his dying breath.

Orson Welles would later express regret for the way that Davies was treated by the public after the movie. In the foreword to Davies’ posthumous memoir, Welles wrote: “Marion Davies was one of the most delightfully accomplished comediennes in the whole history of the screen… she would have been a star if Hearst had never happened.”

The director also maintained that the character of Susan Alexander was meant to be more positive, rather than critical.

“Xanadu was a lonely fortress, and Susan was quite right to escape it,” Welles wrote. “The mistress was never one of Hearst’s possessions; he was always their suitor, and she was the precious treasure of his heart for more than 30 years, until his last breath of life.”

Marion Davies would stay by Hearst’s side until his death in 1951. And she often claimed that she was unbothered by the film, and that she and Hearst had never even seen it.

Davies married for the first time at age 54, shortly after Hearst’s death. She died 10 years later of stomach cancer.

A trailer for the 2020 movie Mank, which aims to paint a more realistic picture of who Davies really was.

Even though Marion Davies certainly made a name for herself in the world of Old Hollywood, it was hard for her audiences and many in the business to separate her filmography from her infamous relationship with Hearst.

But in recent years, people have begun to look at her talents outside of her personal life. In 2002, Charlize Theron narrated the documentary Captured on Film — The True Story of Marion Davies and film historian Edward Larusso released a 182-page illustrated work of her film stills. And the 2020 movie Mank has attempted to paint a more realistic depiction of Davies.

In that sense, Marion Davies has finally made it — and might finally be remembered as the on-screen superstar she really was.

After learning about the controversial life of Marion Davies, read about the rise and fall of actress Frances Farmer. Then, learn about how actress Jean Seberg was driven to suicide by a covert FBI program.