"The ice is receding, and polar bears (are looking) for new ways to survive and the easiest way is coming to people." 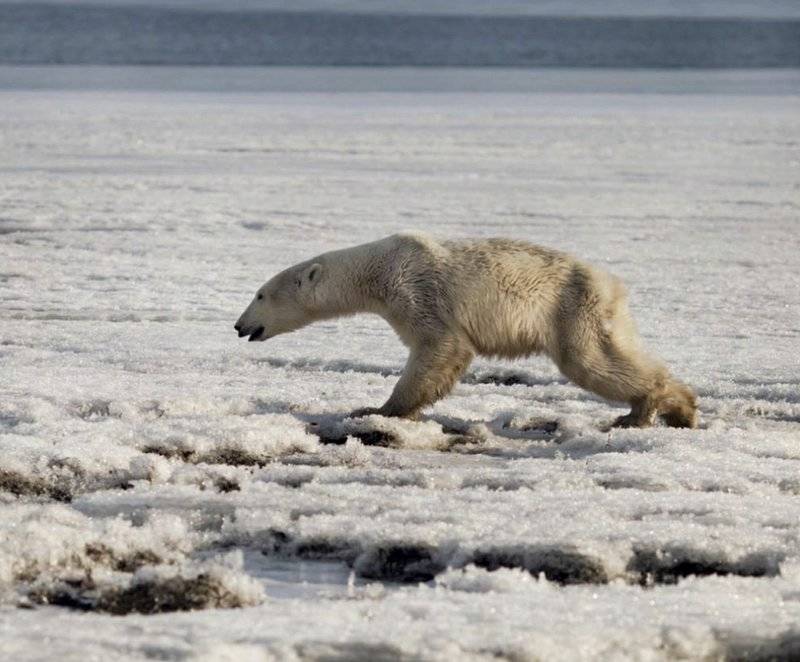 Alina Ukolova/APThe polar bear has been disoriented since its arrival and appears emaciated.

In February, the Arctic settlement of Novaya Zemlya in northern Russia experienced an invasion unlike any other. Polar bears, driven out of their usual territory farther to the north, had encroached on the remote encampment.

According to The Moscow Times, direct examples of this phenomenon have only increased since then. Most recently, a young, exhausted male bear who washed up on an ice floe has now been spotted in Russia’s far east — 435 miles south of its natural habitat.

Naturally, warmer climates and their subsequent effects on dangerous wildlife such as polar bears directly correlate to their presence in populated towns and villages. The issue became so dire in February that authorities in Novaya Zemlya declared a state of emergency.

This has begun to pose serious risks for normal civilians, who might suddenly be confronted by one of these predators after walking out their front doors. Even the Russian military got involved last winter, to help manage the situation.

Residents of a Russian village are trying to save this polar bear, lost 450 miles from home https://t.co/LeTcVAw80M pic.twitter.com/BlJdAP6hp0

The particular bear that was recently spotted waltzed into the Korf and Tilichiki villages of the Kamchatka region on Sunday. According to The Independent, environmentalists believe the predator likely lost all innate sense of direction after its ice floe traveled south.

“Due to climate change, the Arctic is getting warmer (and the) hunting environment (is getting) smaller and less convenient,” said Vladimir Chuprov from Greenpeace. “The ice is receding, and polar bears (are looking) for new ways to survive and the easiest way is coming to people.”

Villagers have captured plenty of footage of the bear since its arrival in their region. Residents have watched the animal swim ashore, get chased away, and rummage for food, while Tilichiki’s online safety guide advises all locals to “make each encounter positive for both yourself and the bear.”

As it stands, Kamchatka authorities hope to airlift the predator back to Chukotka from whence it came. In order to do so, of course, they’ll have to sedate the animal with a tranquilizer, which is scheduled to happen at some point this week.

In order to garner a clearer understanding of just how far this bear managed to end up from home, the distance it traveled is essentially the same distance between Moscow and St. Petersburg, or New York and West Virginia.

Unfortunately, this polar bear’s arrival is a stark reminder of how serious our climate issues have become — and compounded by the fact that Russia classifies polar bears as an endangered species.

Hopefully, this underfed polar bear successfully manages to get back home and tracks down some well-deserved food as nature intended.

Next, see another emaciated polar bear that foreshadows the species’ grim future. Then, learn about evidence of the fabled “king” polar bear possibly having been discovered in Alaska.