Meet Félix Rodríguez, The CIA Operative Who Captured Che Guevara And May Have Tortured A DEA Agent

Félix Ismael Rodríguez spent his life as a special agent with the CIA fighting communism in Central and South America — and got his hands very dirty along the way. 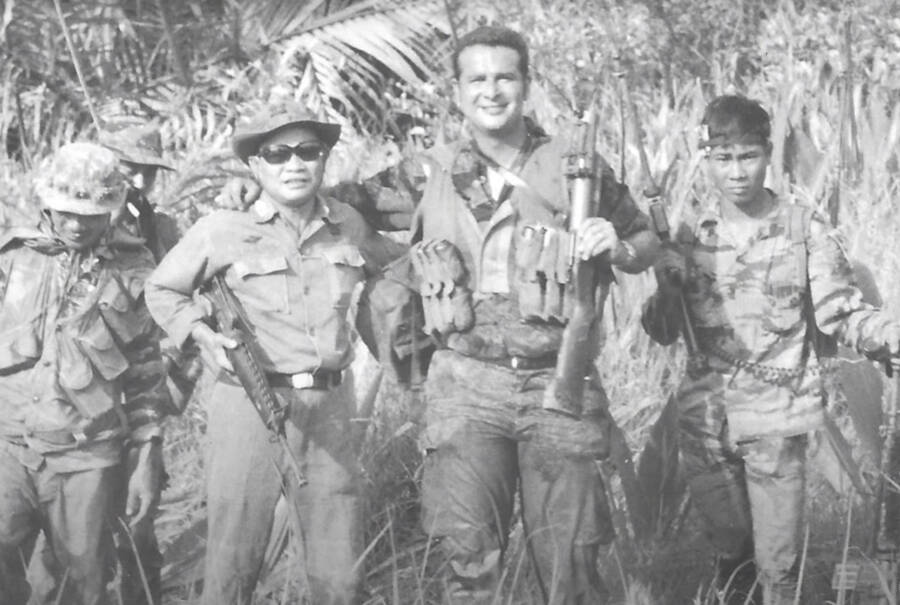 Félix Rodríguez is no stranger to regime change wars. He was born in Cuba to a wealthy, land-owning family before the revolution of 1959. His family fled to Miami that same year, and Rodríguez worked the rest of his life to fight communism as a CIA officer, and often went to extraordinary — and extra-legal — lengths to do so.

Rodríguez was part of some of the most controversial paramilitary operations of the 20th century, including the Bay of Pigs invasion and the execution of Che Guevara. Later, he flew black ops missions in Vietnam and worked closely with then-CIA director George H.W. Bush to set up the Iran-Contra arms sales.

And, according to DEA agent Hector Berrellez, he watched a Mexican cartel murder a DEA agent. Berrellez claims that Rodríguez was not only present at the interrogation of DEA agent Enrique “Kiki” Camarena, but directed part of the 36-hour torture preceding his death.

Berrellez believes that Camarena discovered the CIA in bed with the Guadalajara Cartel, using them to run drugs, weapons, and cash to fund Nicaragua’s anti-communist Contras — and Rodríguez stopped at nothing to protect that relationship.

The Bay Of Pigs And Che Guevara 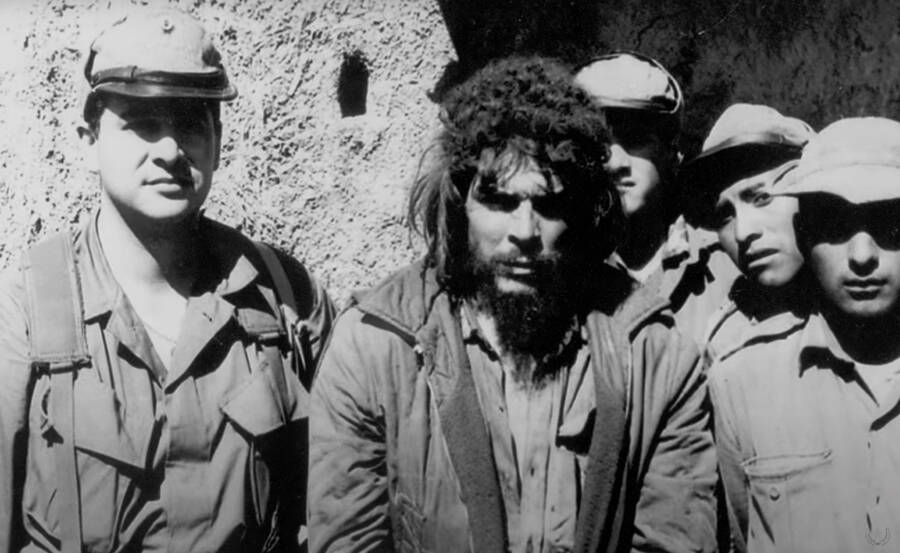 Born on May 31, 1941, in Sancti Spíritus, Cuba, Félix Ismael Rodríguez Mendigutia had dissidence in his blood. His grandfather Alejandro Rodríguez Velasco had fought for Cuban independence in the Ten Years’ War against Spain and become the first freely-elected mayor of Havana following the war.

His biggest hero was Máximo Gómez, an officer who had left his native Dominican Republic to help Cuban liberate itself from Spain. Rodríguez would later employ the alias of “Max Gómez” during his covert work for the CIA.

Despite his Latin American roots, Rodríguez’s education was American. He accepted an uncle’s offer to attend boarding school in the United States at the Perkiomen School in Pennsylvania. But he dropped out when his true calling emerged at the age of 17.

Fidel Castro was rising to power in 1958 and would seize communist control of Cuba within a year. Rodríguez returned to Cuba to join Dominican dictator Rafael Trujillo’s Anti-Communist League of the Caribbean to help to invade Cuba.

He landed in Santo Domingo (then called Ciudad Trujillo) on July 4, 1959. The fledgling league staged only one mission that ended in disaster. Rodríguez returned to Pennsylvania to finish his degree, then moved to Miami to be with his parents, who had fled Castro’s regime.

But by September 1960, Rodríguez had returned to paramilitary operations, and joined a group of Cuban exiles in Guatemala. 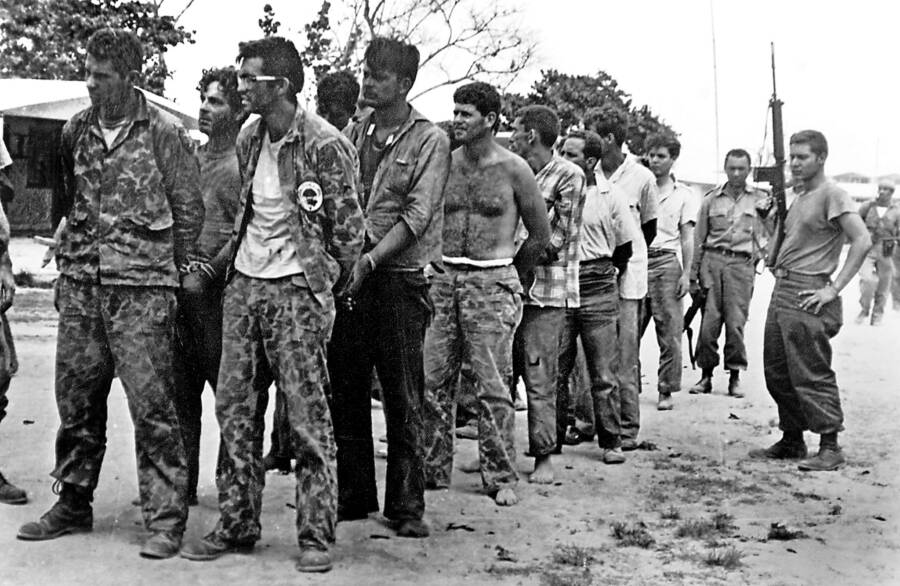 Miguel Vinas/AFP via Getty ImagesCaptured members of the Cuban counter-revolutionary Assault Brigade 2506 following the Bay of Pigs invasion in April 1961.

They were known as Brigade 2506, and they were supported by the CIA, which was training them for the Bay of Pigs invasion. Prepped to invade Cuba within months, Rodríguez and a small team infiltrated the island in February 1961. Their orders were to help local resistance fighters prepare for an impending invasion to topple Castro once and for all.

But the mission was a fiasco. Rodríguez barely escaped alive, finding himself sheltered in the Venezuelan embassy of Havana for five months before returning to his wife in Miami. Domesticated for six years, Rodríguez resumed his work for the CIA in 1967, when he received orders to locate and detain Che Guevara — a growing threat to U.S. interests galvanizing Bolivians into revolution.

Rodríguez managed to interrogate a guerrilla prisoner and lead Bolivian officials to Guevara on Oct. 8, 1967. The men met the next day, at which point the captured and shackled revolutionary shared his perspective on life, war, and philosophy with Rodríguez — who allowed officer Joaquín Zenteno Anaya to execute the man.

Then, Guevara’s last words were to Rodríguez. “If you can, tell my wife to marry again and try to be happy,” he said.

Félix Rodríguez And The CIA 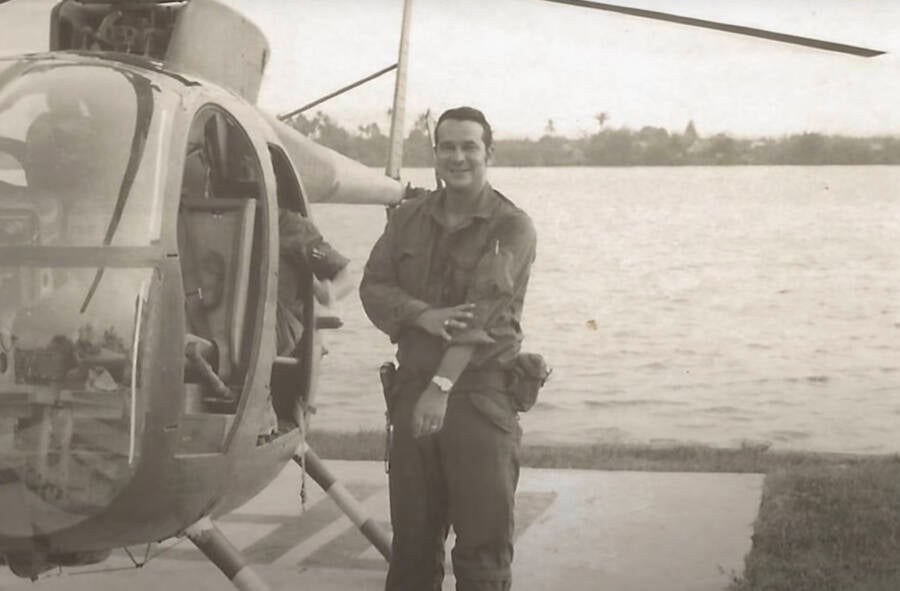 Félix Rodríguez volunteered for the Vietnam War, and spent his time between 1970 and 1972 in special operations. Under the adopted identity of “Max Gómez,” he flew countless helicopter missions and trained members of the Phoenix Program — a CIA project engaged in staggering atrocities until 1971.

According to investigative reporter Tom O’Neill, the macabre program aimed to win the hearts and minds of neutral Vietnamese civilians by murdering and torturing their countrymen and making it appear as though the Viet Cong had done so. Anthony Herbert, the most decorated veteran of Vietnam, described it thusly:

“They wanted me to take charge of execution teams that wiped out entire families and tried to make it appear as though the Viet Cong had done it themselves. The rationale was that the Viet Cong would see that other Viet Cong had killed their own and…make allegiance with us. The good guys.”

This involved surgically opening the skulls of prisoners, placing electrodes on their brains, and shocking them into killing each other. While Rodríguez’s capacity in any of this remains unknown, he reported directly to Ted Shackley, the head of the Phoenix Program who would later become George H.W. Bush’s top aide at the CIA, until 1972. 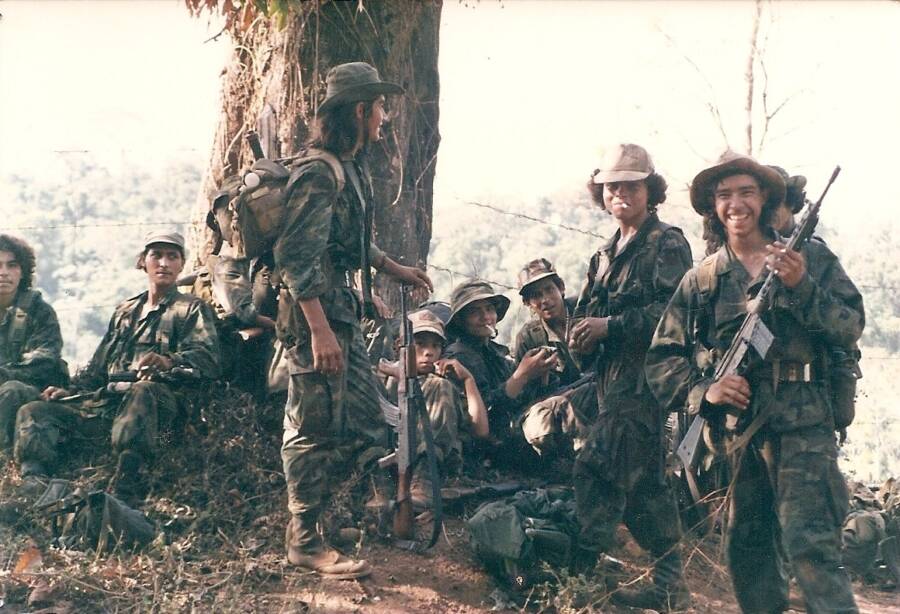 Ultimately, the United States left Vietnam and ended hostile operations in 1975. While Rodríguez claimed to have retired from the CIA the following year, curious claims during the Iran-Contra affair in the mid-1980s suggested otherwise, as White House staff member and known drug-runner Oliver North asked for his help.

Rodríguez agreed to help North resupply the Contras in Nicaragua with arms and equipment to overthrow the country’s Castro-backed government. Financed by the Reagan administration’s illegal arms sales to Iran, the CIA operation left thousands of people dead.

Rodríguez ultimately testified at the 1987 Iran-Contra hearings to detail his involvement without a lawyer present. While it seemed he regretted involvement in the illegal affair, he had nonetheless been a contributor to its bloody consequences.

Allegations Against ‘The Last Narc’ 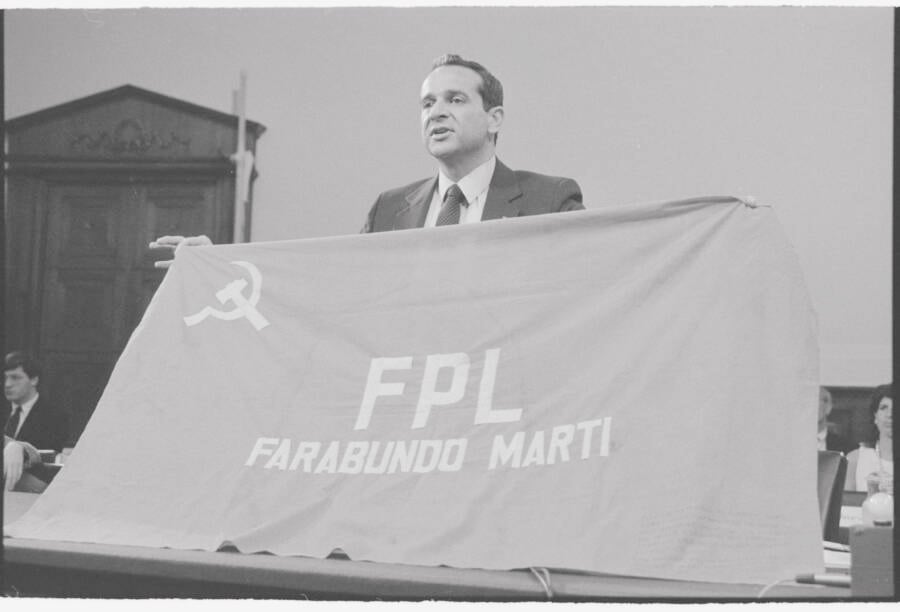 Bettmann/Getty ImagesFelix Rodriguez displays a flag which he claimed to have captured from communist guerillas in El Salvador.

If recent claims are to be believed, Félix Rodríguez’s activities in 1985 were equally ruthless.

That was the year Enrique “Kiki” Camarena was abducted, tortured, and murdered by the Guadalajara Cartel. The undercover DEA agent had dangerously encroached on the dealings of its kingpins, Miguel Ángel Félix Gallardo, Ernesto Fonseca Carrillo, and Rafael Caro Quintero.

Camarena had located their expansive marijuana plantation, Rancho Búfalo, with its subsequent destruction costing the cartel billions in profit. With everyone from local police and politicians to Mexico’s President Miguel de la Madrid on their payroll, seizing Camarena on Feb. 7, 1985, was a cakewalk.

Tortured for 36 hours and keep alive by doctor Humberto Álvarez Machaín, Camarena ultimately fell into a coma and was beaten to death. According to Berrellez and his claims in documentary The Last Narc, however, none other than Félix Rodríguez had overseen the crime — and helped torture the DEA agent.

“The CIA ordered the kidnapping and torture of ‘Kiki’ Camarena, and when they killed him, they made us believe it was Caro Quintero in order to cover up all the illegal things they were doing [with drug trafficking] in Mexico,” said Phil Jordan, former director of the El Paso Intelligence Center. 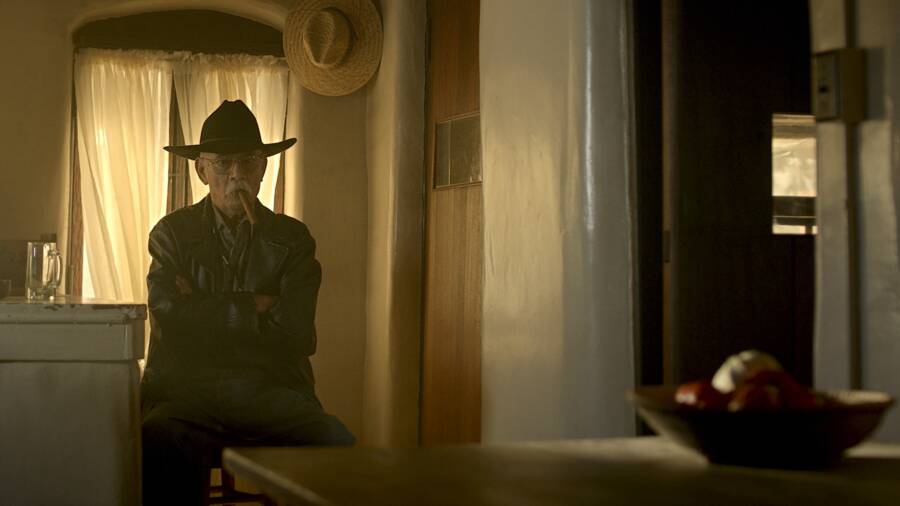 Amazon StudiosHector Berrellez is convinced that Félix Rodríguez was involved in the 1985 torture and murder of Enrique “Kiki” Camarena.

“During this investigation, we discovered that some members of a U.S. intelligence agency, who had infiltrated the DFS (the Mexican Federal Security Directorate), also participated in the kidnapping of Camarena,” said Berrellez. “Two witnesses identified Félix Ismael Rodríguez.”

While Rodríguez firmly denies even being in Mexico in 1985, former CIA pilot Terry Reed chronicled in his 1996 memoir to have met with the Cuban CIA asset in Veracruz in August of that year. He also explained that Rodríguez was hired by the intelligence agency specifically to run a weapons front in Guadalajara.

But despite these accusations, Félix Rodríguez continues to live a nice and quiet life in Miami with his family. Since 2004, he has served as president of a veteran’s association for Bay of Pigs survivors and even opened the Bay of Pigs Museum and Library in Miami.

And although the true extent of his actions for the CIA remain shrouded in mystery, he continues to speak and deliver lectures at universities and high schools around Florida on the perils of communism in Latin America.

After learning about Félix Rodríguez, read about Project MKUltra, the CIA’s quest for mind control. Then, learn about journalist Gary Webb linking the CIA to the crack epidemic.