This is the fourth reported sighting of a female anaconda squeezing her mate to death, but the first time it was caught on camera. 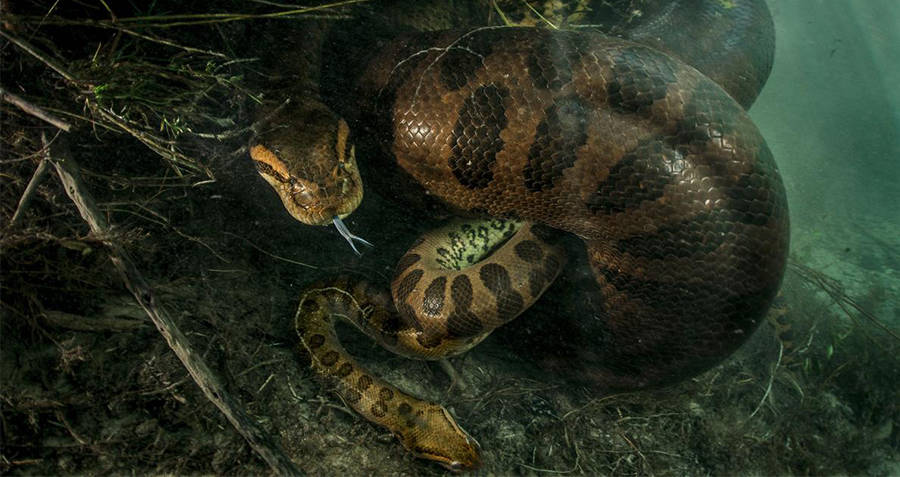 A photographer in Brazil has captured the first ever photograph of a female green anaconda squeezing her mate to death.

Luciano Candisani got more than he bargained for while hunting large snakes in the swamplands of Brazil — a photograph of a mating ritual gone horribly wrong for the male. The female anaconda, well known to local guides and as “thick as a truck tire,” was first noticed entangled with a male on the bottom of the river.

Upon first glance, Candisani thought that the female was just wrapping the smaller male in a post-mating embrace. However, after watching for a few hours, he realized what was really happening.

“I couldn’t actually understand what was going on at first,” Candisani told National Geographic. “But then she dragged the male’s body with her when she went into the grass.”

After realizing that the female intended to eat the male, (though he admits, he did not see it happen) Candisani took his photo to anaconda expert Jesus Rivas, a biologist with the New Mexico Highlands University. Rivas has studied reptiles in Venezuela for over 30 years and has documented a few cases of cannibalism among anacondas.

For the most part, it’s believed that the female eats the male for protein. Expecting anacondas often fast for their entire pregnancies, which are about seven months long. The extra protein at the start can really help.

“A full 30 percent of her bodyweight goes into making babies. Getting an extra seven or eight kilos of meat before you go into that stage isn’t such a bad idea,” Rivas said.

The size difference in the snakes also helps. Female anacondas average at 12 feet, though they can grow up to 17. Males usually measure at about 9 feet, making them easy prey.

Candisani estimated this snake at around 23 feet.

Rivas also said that Candisani’s photo is the first of it’s kind, and only the fourth reported occurrence of a female anaconda strangling her mate.

No one has reported seeing the snake since the photo was taken in 2012, but Candisani decided to share his photo for the first time now to raise awareness for the area. The area where the anacondas live is under threat by an increasing agricultural presence, as well as multiple wildfires. In February, a large fire near the river took five days to extinguish.

Enjoyed this? Check out these bizarre human mating rituals that’ll challenge your idea of romance. Then, read about the grizzly and polar bear hybrid.