A new analysis suggests that more and more money accumulates in fewer and fewer hands. 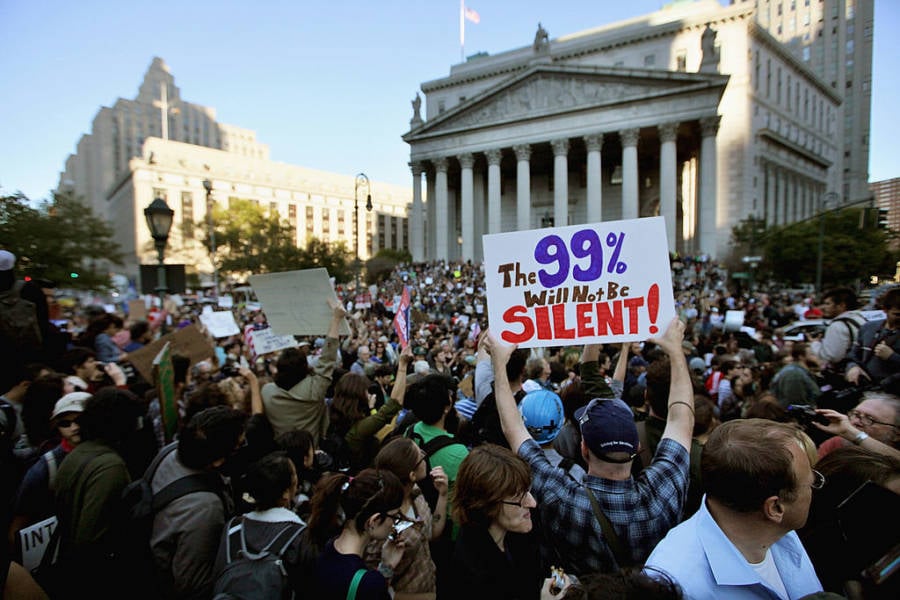 The incredible chasm between the top one percent of the world’s wealth-holders and everybody else is widening so quickly that, in the past six months alone, the number of people who hold the equivalent of half world population’s wealth has shrunk from eight, to six, to five.

As of June 16, the top five richest people in the world are:

Therefore, on average, each of those five men owns as much wealth as 750 million people.

“Most of the super-super-rich are Americans,” Paul Buchheit writes about his recent analysis. “We the American people created the Internet, developed and funded Artificial Intelligence, and built a massive transportation infrastructure, yet we let just a few individuals take almost all the credit, along with hundreds of billions of dollars.”

Because a glass of champagne is so necessary when driving. #inequality www.inequality.org

This is because, Buchheit argues, our society has been conditioned to believe in an American dream based on meritocracy, in which you earn everything that you deserve.

“A meritocracy? Bill Gates, Mark Zuckerberg, and Jeff Bezos have done little that wouldn’t have happened anyway,” he writes. “ALL modern U.S. technology started with—and to a great extent continues with—our tax dollars and our research institutes and our subsidies to corporations.”

According to the data, America’s one percent managed to shift $4 trillion away from the rest of the nation and into their own pockets. Half of that wealth came from the poorest 90%.

Trends like this have caused current income inequality in America to be greater than at any time since the 1920s.

“They have taken credit, along with their massive fortunes, for successes that derive from society rather than from a few individuals,” Buchheit writes. He adds that because these people did not truly earn their wealth alone, they shouldn’t get to choose where it goes alone.

“It should not be any one person’s decision about the proper use of that wealth. Instead a significant portion of annual national wealth gains should be promised to education, housing, health research, and infrastructure. That is what Americans and their parents and grandparents have earned after a half-century of hard work and productivity.”

But Donald Trump is thinking tax cuts for these guys could work, too.

Next, read about a study suggesting that the richest one percent are to blame for your unhappiness. Then, check out our list of the top ten richest people of all time. Finally, read up on Mansa Musa, who may have been the richest person of all time.