Fragging: When Soldiers In Vietnam Revolted Against Their Officers By Murdering Them With Grenades

In the jungles of Vietnam where order and discipline hung by a thread, some officers faced a danger greater than the Viet Cong: their own men. 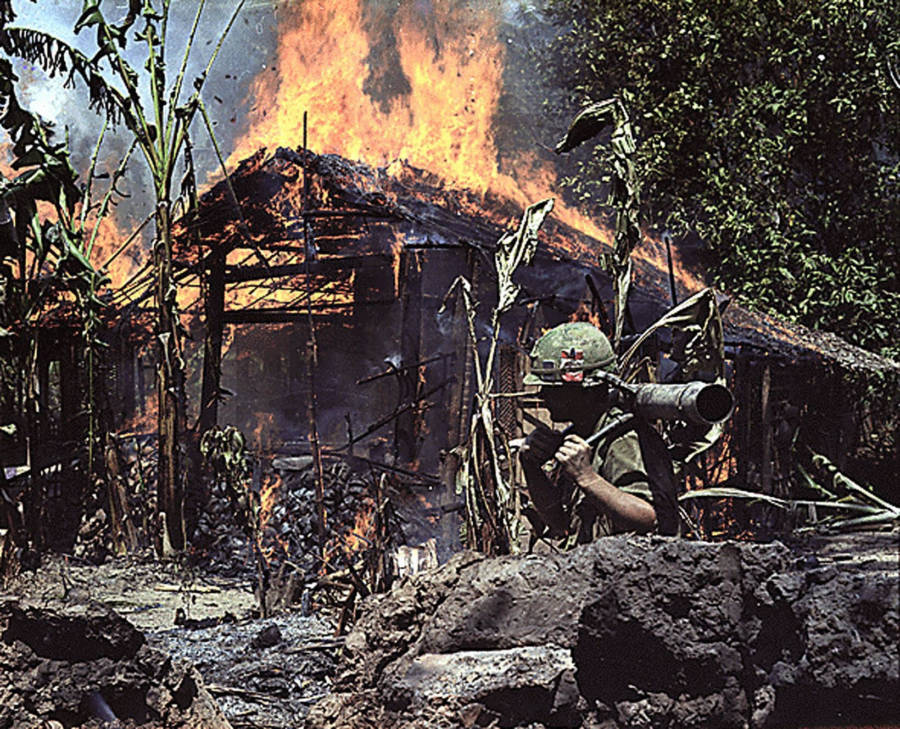 NATIONAL ARCHIVES/AFP/Getty ImagesMore incidents of fragging occured in the Vietnam War than in either World War.

As the Vietnam War dragged on, soldiers began to see the war as unjust and unwinnable, leading to openly mutinous behavior.

By way of a “fragmentation grenade,” from which the term “fragging” was derived, a soldier could effectively do away with an officer without leaving any evidence. Because the shell of the grenade was destroyed, any fingerprints were destroyed with it. Individual grenades were also not given unique serial numbers, so any effort to trace the murder weapon back to the murderer was unlikely.

Fragging attacks were usually retaliation for some disciplinary action, although they were also sometimes a convenient means for worried troops to get rid of an officer they thought was incompetent.

Targets were sometimes even given a warning in the form of a grenade with their names painted on it, planted in their sleeping quarters with the safety pin still in.

An Act Of Fragging? 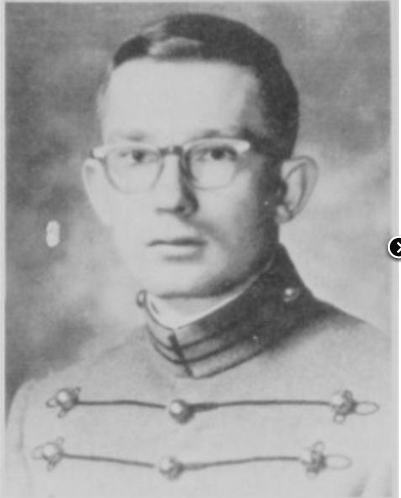 Vietnam Veterans MemorialLt. Thomas Dellwo was killed by a fellow soldier the day before he was slated to leave Vietnam.

On the night of March 15, 1971, a group of American artillery officers stationed at the Bien Hoa Air Force base were enjoying a rare “wonderful time of great food and fellowship” in a brief respite from the war.

The relaxed atmosphere was suddenly shattered around 1 a.m. when the sounds of an explosion ripped through the base. The officers assumed the blast was an attack by the Viet Cong and quickly prepared to defend themselves but strangely, there were no sounds of further hostilities.

They were soon informed by the battalion commander that the source of the commotion was a hand grenade that had been tossed through an open window into officers’ sleeping quarters. The attack had killed Second Lieutenant Richard E. Harlan and First Lieutenant Thomas A. Dellwo.

The officers soon determined that the attack had not come from the enemy at all, but rather they contended that the grenade that took the lives of their two superiors was tossed by a fellow soldier, Private Billy Dean Smith. 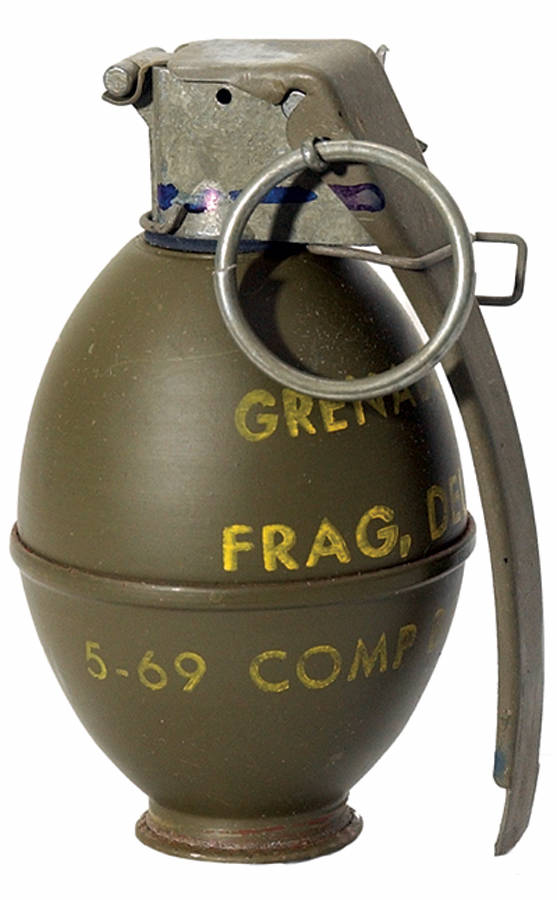 Wikimedia CommonsThe M26 Grenade that was often used for fragging during the Vietnam War.

The ensuing trial was fraught with allegations that a racist system had railroaded Smith, a black man who had made antiwar statements before the incident. The prosecution produced damning evidence, but ultimately, a jury acquitted Smith in 1972.

While Dellwo and Harlan may have been the first fragging casualties that the American public would hear about, and they weren’t the first and would not be the last. Indeed, fatal soldier-on-soldier attacks would only become more common as morale and discipline steadily deteriorated over the course of the Vietnam War.

Hand grenades had been used in combat since World War I yet there were very few incidents of fragging reported during the two World Wars or the Korean War.

Researchers speculate that this is in part due to the nature of the war itself. During the Vietnam War, the U.S. Army implemented a one-year rotation policy for soldiers and a six-month rotation for officers, meaning the men were unable to form the bonds that so often meant the difference between life and death in combat, as well as to cement the units with a sense of purpose and unity. 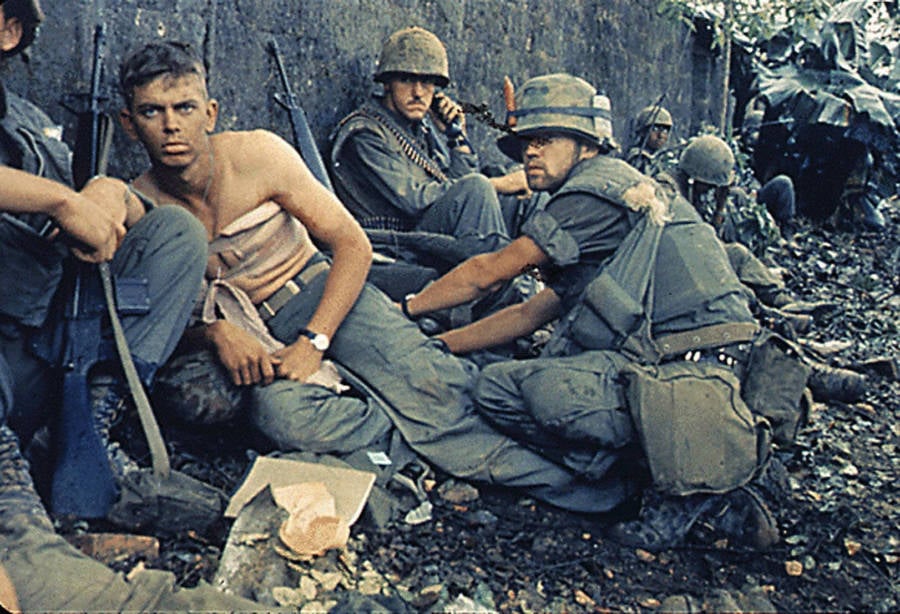 NATIONAL ARCHIVES/AFP/Getty ImagesAmerican soldiers at the frontlines during the Battle of Huế in early 1968.

A rise in drug use and the presence of a disproportionately high number of drug-addicted soldiers also contributed to the rise in fragging. Indeed, during his trial, Private Smith openly admitted that he had been high during the attack that killed Dellwo and Harlan — though he maintained that he didn’t perpetrate the attack.

Roy Moore, a former Chief Justice of Alabama who also served in the 88th Military Police Company in Vietnam in 1971, described how “drug use was widespread” so that he “administered many Article Fifteens, disciplinary charges filed against insubordinate or disobedient soldiers.”

Far from restoring order as Moore had hoped, his actions instead made him “a marked man” and he began receiving multiple fragging threats. Captain Moore, after refusing to be intimidated by the threats and continuing to hand out disciplinary charges, nearly met his end at the hands of “a known drug user by the name of Kidwell” who shot a first sergeant and was on his way to kill Moore before he was apprehended.

Also, as opposition to the war became more vocal and the Army began to draw down, discipline, consequently, began to disintegrate within the ranks. The men became less and less inclined to obey orders that would put their lives at risk in a war that they knew was already on its way to ending.

By 1971, Colonel Robert D. Heinl declared that “Our Army that now remains in Vietnam is in a state approaching collapse, with individual units avoiding or having refused combat, murdering their officers, drug-ridden, and dispirited where not near-mutinous.” 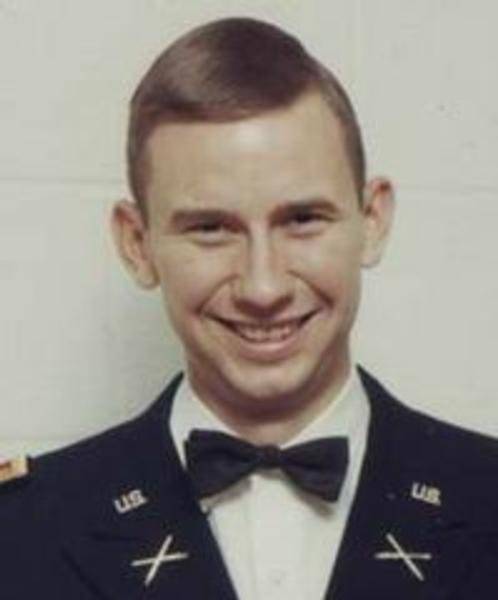 Vietnam Veterans Memorial Fund24-year old officer Richard Harlan was killed in his bed by a private who later admitted he was on drugs at the time.

Many officers began to feel unsafe simply because of their high-ranking position. Colin Powell, who served as a major in Vietnam, recalled that during his second tour from 1968 to 1969, “I moved my cot every night, partly to thwart Viet Cong informants who might be tracking me, but also because I did not rule out attacks on authority from within the battalion itself.”

Statistics Then and Now

Over the course of the entire Vietnam War, there were 800 documented fragging attempts in the Army and Marine Corps. By another account, over 1,000 such incidents were thought to have occurred. Between 1969 and 1970 alone, the U.S. Army reported 305 fraggings.

The true number of fragging incidents, however, may never be known. This is partly because the attacks themselves make it difficult to determine which were deliberate and partly because, in an attempt to spare the victims’ families further pain, the Army did not officially report the true cause of death of some of the officers.

The United State officially ended its involvement in Vietnam in 1973, along with its military draft. The end of the war also marked the end of the fragging epidemic, something which some historians speculate is not unrelated to the end of the draft.

Many professional military men believe that an army composed entirely of volunteers has a tendency towards higher morale, support, and discipline. This combined with stricter screening processes to rule out drug addicts and greater attention to soldiers’ psychological stress has miraculously reduced the number of fragging incidents.