Frank Lloyd Wright Practiced Sustainable Design Before It Was A Movement 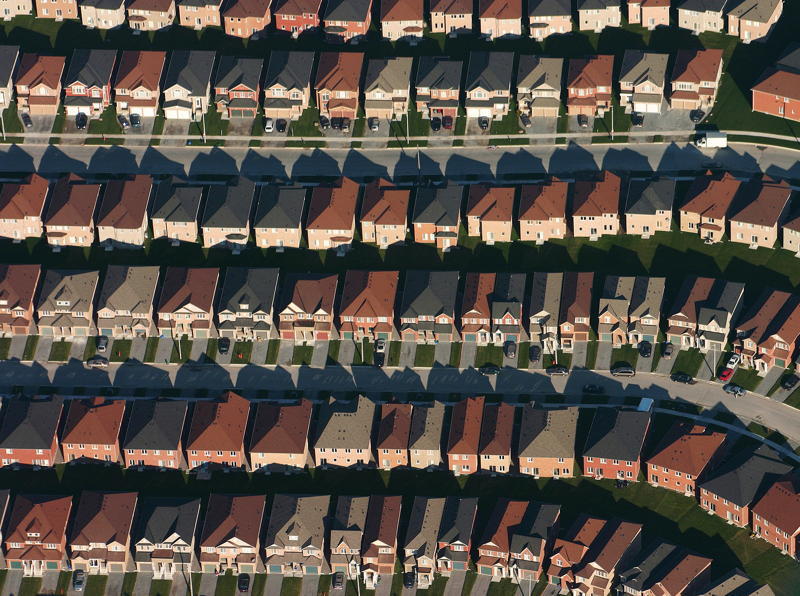 In the United States, many conceive of the 20th century as a time when man successfully separated humanity from nature. One of the most obvious examples of this can be found in popular visions of modern architecture.

After World War Two, the American economy thrived and suburban development quickly churned out homes to meet nationally increasing demand. And thus the suburbs as we think of them today were born. American city growth continued to expand outside of city centers and by the 1980s, suburbia was not just a growing reality but an ideal destination for many.

But some were uncomfortable with the cost of suburban sprawl. It seemed that homes grew bigger at the risk of habitat destruction and energy waste, while giving way to an aesthetically unpleasing uniformity.

Born out of the 1970s environmental movement, contemporary architects have injected the concept of sustainability into their designs, seeking not to use the home to separate people from nature but as a device to re-integrate the two. For these designers, new home plans are focused on native material usage, energy efficiency, recycling and blending nature with human construction. But this isn’t completely a new concept; it’s a rediscovery of earlier principles. 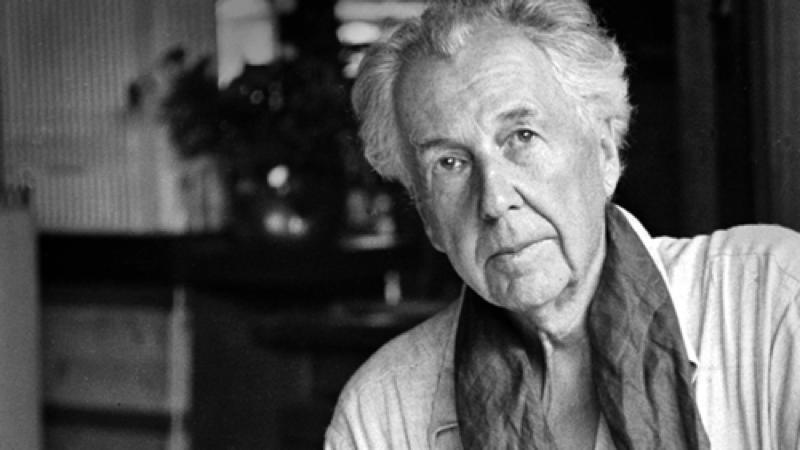 But in the early to mid 20th century, innovative architect and designer Frank Lloyd Wright was guided by these very conventions. Wright focused on harmony of parts in relation to the whole, and believed that a home shouldn’t overcome its surrounding landscape like the Addams Family mansion. Rather, it should blend with the environment in an act of architectural transcendentalism. Landscaping was crucial to his designs, as were windows and outdoor spaces that convened nature and living areas. 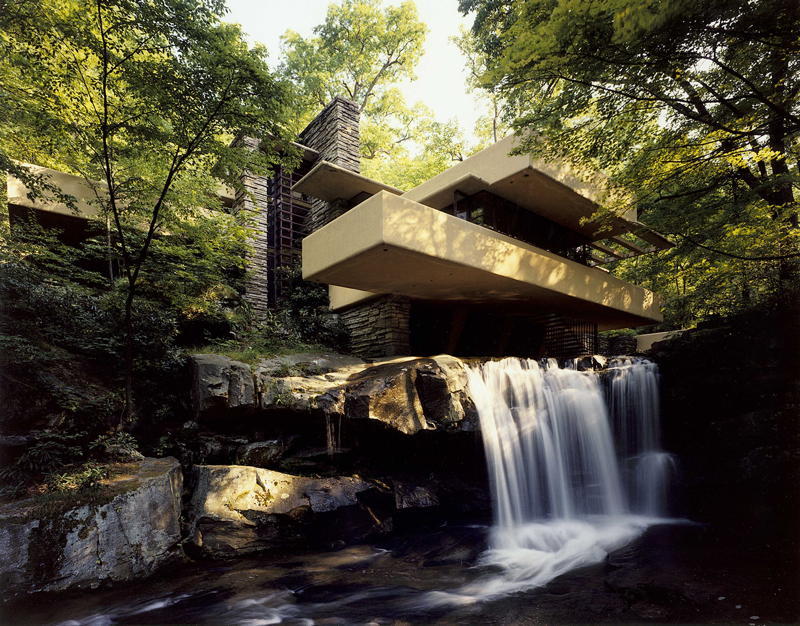 Wright championed his concerns about energy consumption in his designs. His Usonian houses were small and single-storied, focusing on liveability in minimum space, and giving owners unique designs at moderate cost. Wright utilized existing natural elements like sunlight and wind, and combined them with design to provide heating and cooling. These cost-effective features remain a significant part of sustainability architecture today.

As Wright said, “The architect must be a prophet – a prophet in the true sense of the term – if he can’t see at least ten years ahead, don’t call him an architect.” Obviously a visionary, these three houses signify Wright’s philosophy and convey the history of a sustainability movement that began almost a century ago: 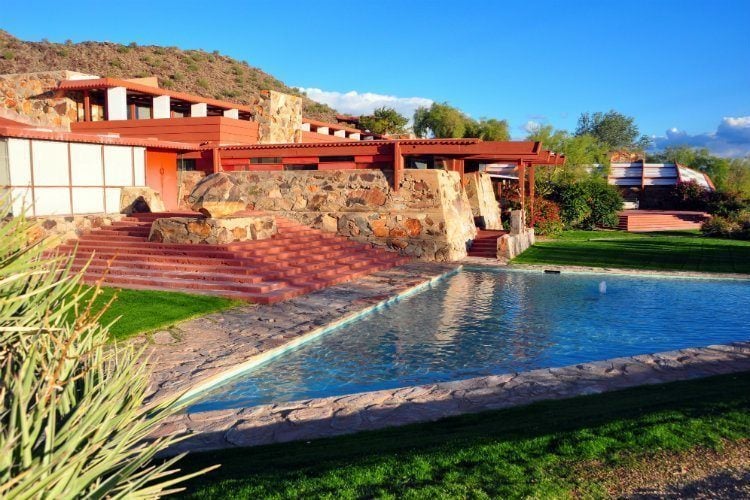 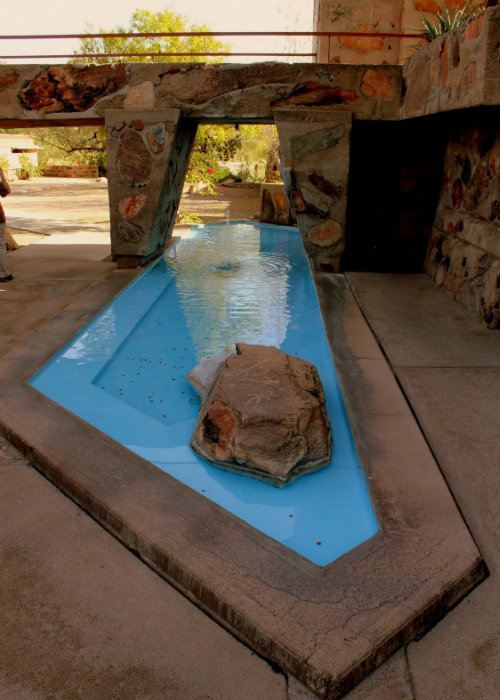 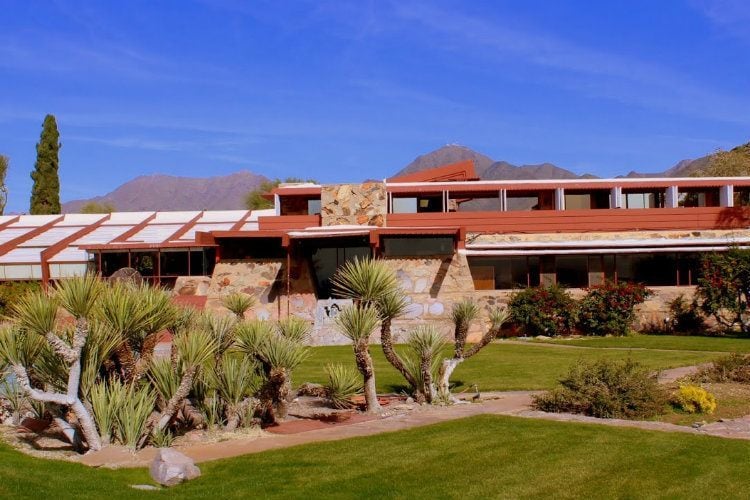 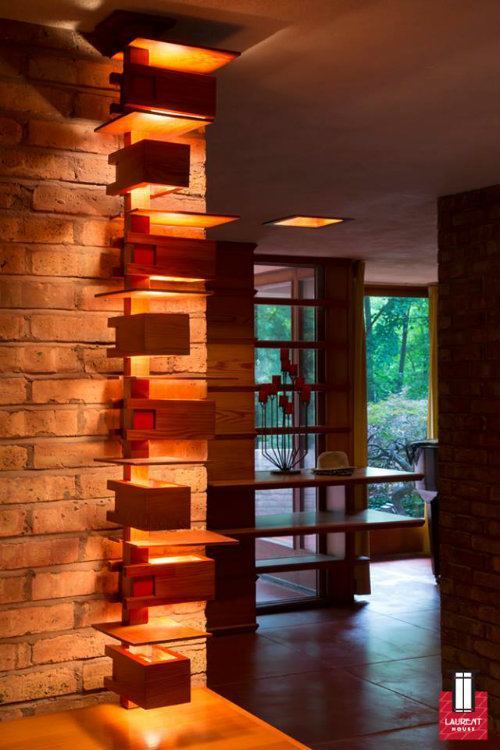 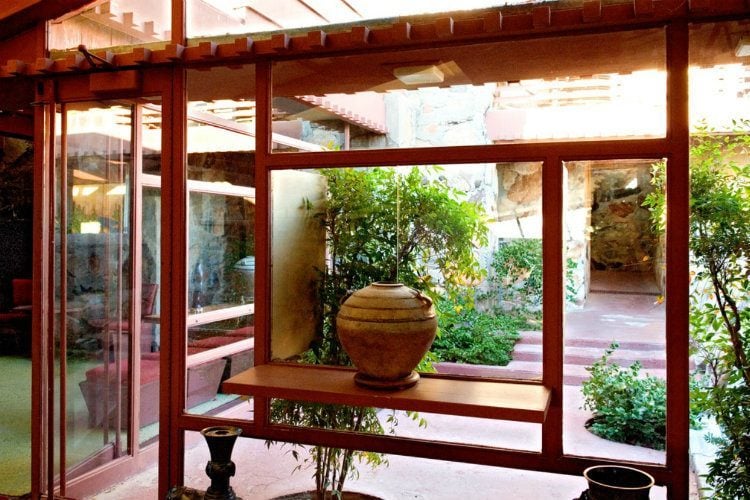 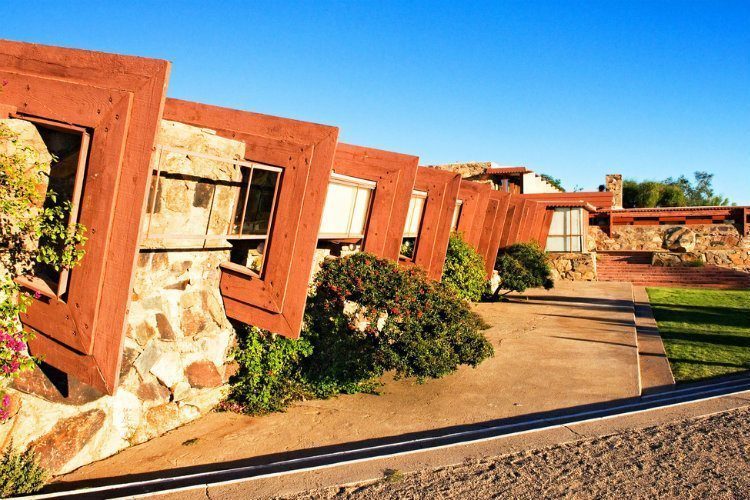 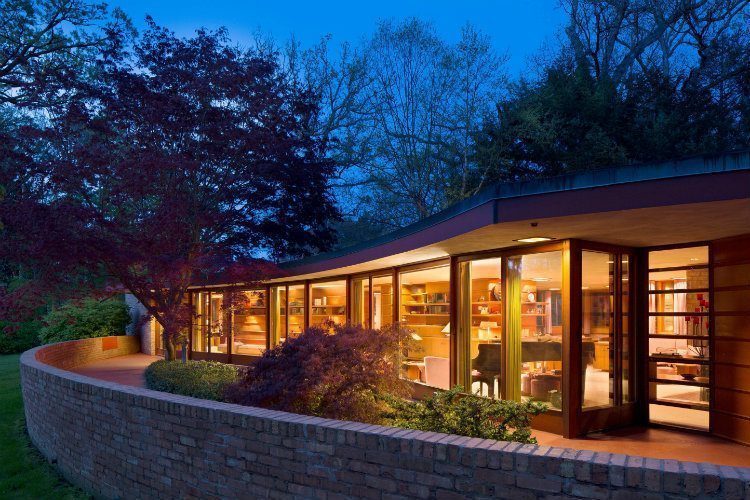 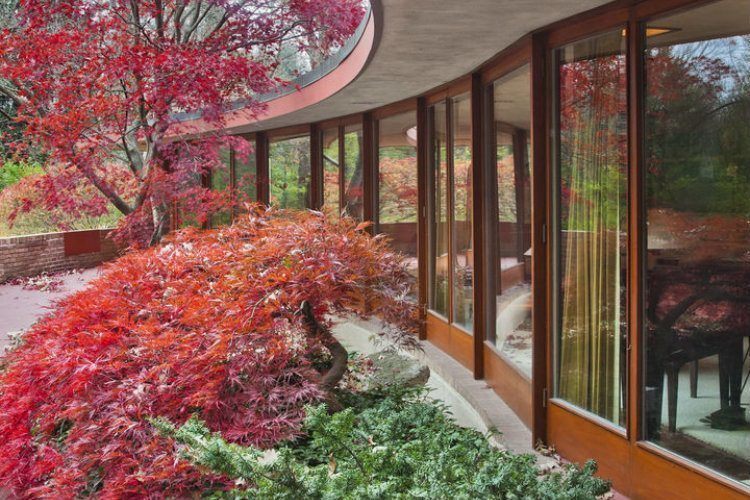 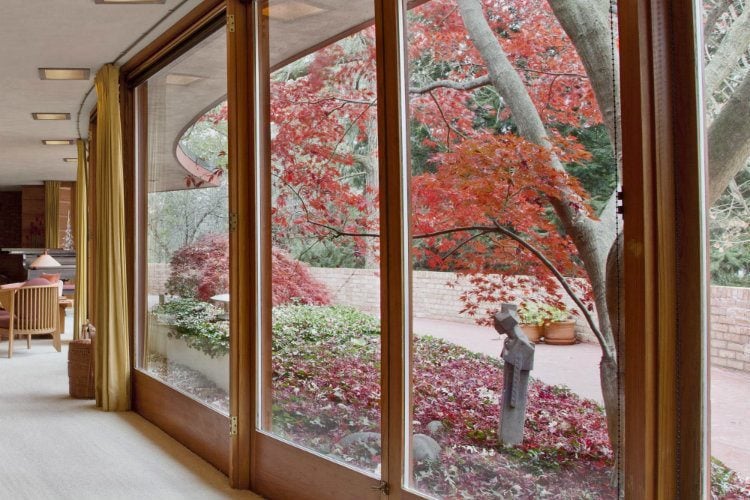 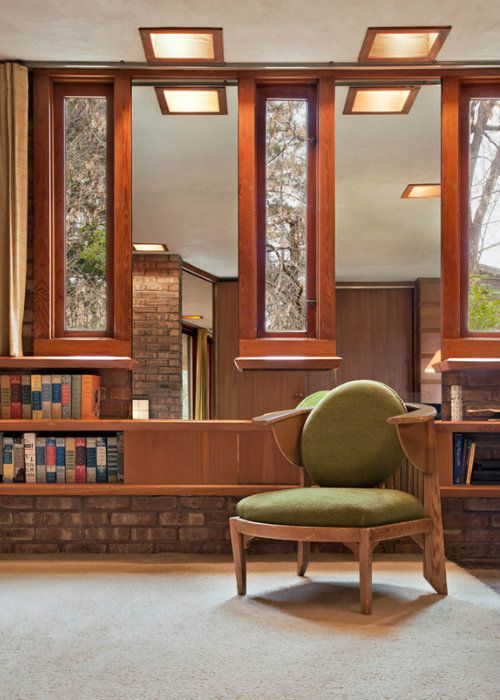 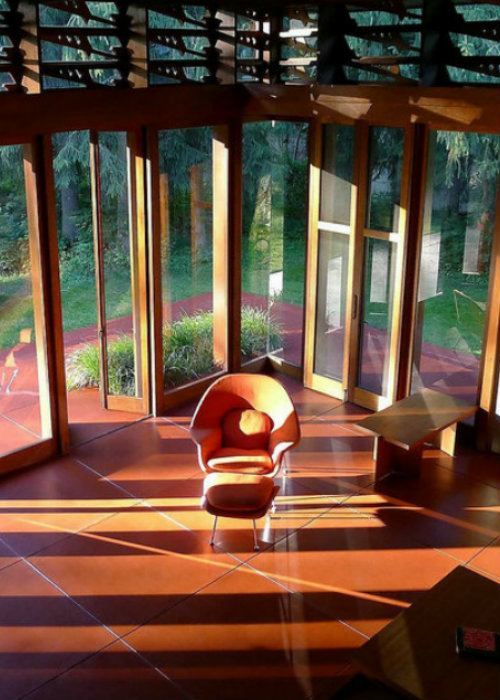 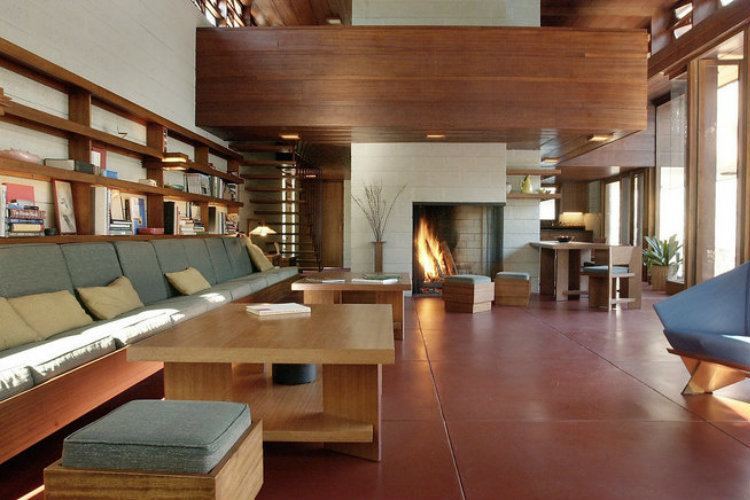 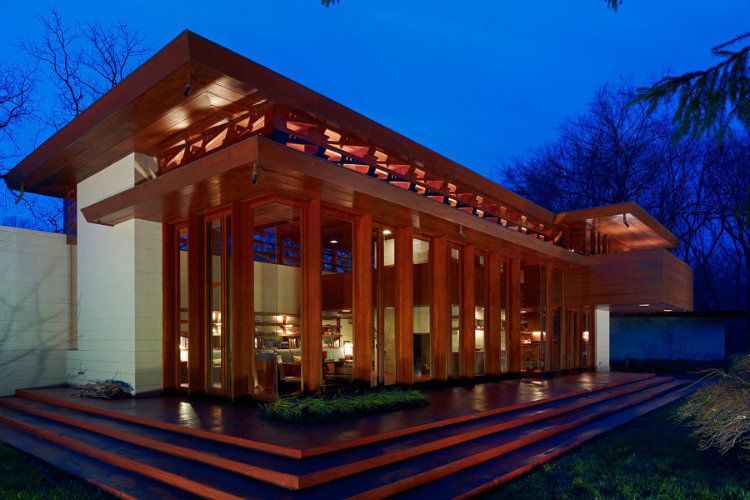 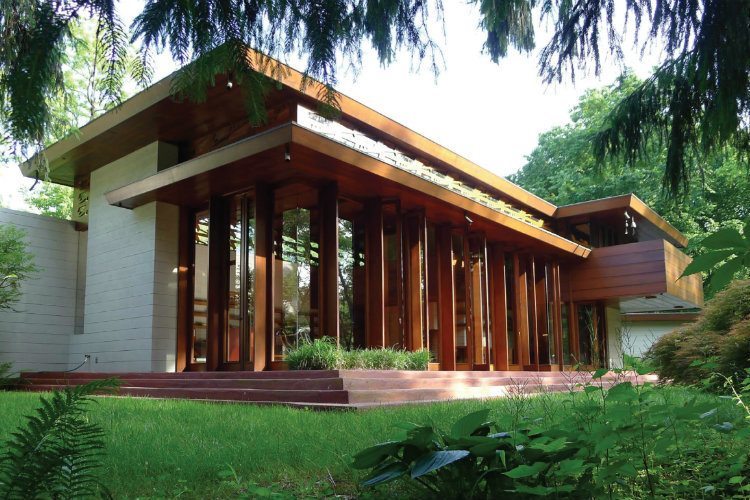 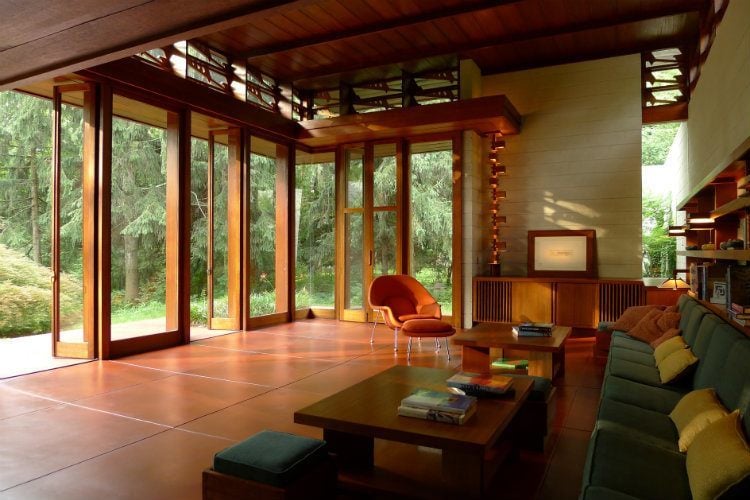 1 of 16
Taliesin West was Frank Lloyd Wright’s winter home from 1937 until his death in 1959. He felt strongly about the beauty of the Arizona desert and when he found the site outside of Scottsdale, he claimed it to be “the top of the world.” Source: Wikimedia
2 of 16
Local desert rocks surrounded by concrete serve as the primary construction materials. Wright designed the roof to extend over the windows on the south side to prevent harsh sunlight from directly entering the home. Source: Murray Chronicles
3 of 16
Taliesin’s large windows keep the outside close to the interior and remind visitors of the natural surroundings. Source: Murray Chronicles
4 of 16
5 of 16
The abstract colors and shapes call to mind the native plants and animals of the Sonoran desert. Wright was inspired by sweeping desert sands, the patterns of rattlesnakes and the saguaro cactus. Source: Wordpress
6 of 16
The home is now the main campus of the Frank Lloyd Wright School of Architecture. Students spend the winter in Arizona and the summer in at Taliesin, Wright’s other former home, in Wisconsin. Source: Pinterest
7 of 16
The Laurent House was built in Rockford, Illinois in 1951 using red tidewater cypress and Chicago common brick, with most materials sourced locally. Source: Dwell
8 of 16
This home is the only building that Wright ever designed for a person with a disability. Its beauty is complemented by its functionality, which provided for the wheelchair-using owner. The floors are level with outdoor walkways and the hallways are large enough to accommodate mobility devices. Source: Dwell
9 of 16
The home features a solar hemicycle design, which provides for natural cooling, along with an outdoor patio and fish pond. Source: Dwell
10 of 16
Mirrors in the living area reflect the natural surroundings of the home, keeping the focus on nature’s beauty. Source: Loftenberg
11 of 16
The Bachman Wilson home was constructed in 1954 in Millstone, New Jersey, though it was relocated in its entirety to Bentonville, Arkansas in 2014 as part of the Crystal Bridges Museum of American Art. Source: NJ
12 of 16
The front facing portion of the house provides privacy, while the opposite side features 10 foot tall windows that permit natural light to fill the home. Source: NJ
13 of 16
It has a second story, which is rare for a Usonian home, that overlooks the living area from cantilevered balconies. Ancillary spaces are minimized and radiant heat is employed, a common trait of green building practices. Source: Arsenic Arquitetos
14 of 16
The large windows are topped by decorative wooden panels that call to mind stylized Native American motifs and natural forms. The home wraps around a central hearth used for heating. Source: Crystal Bridges
15 of 16
The house was relocated because of area flooding in New Jersey that threatened the integrity of the home. The new location is in the middle of 120 acres and affirms Wright’s desire to integrate nature into his architecture. Source: Crystal Bridges
16 of 16