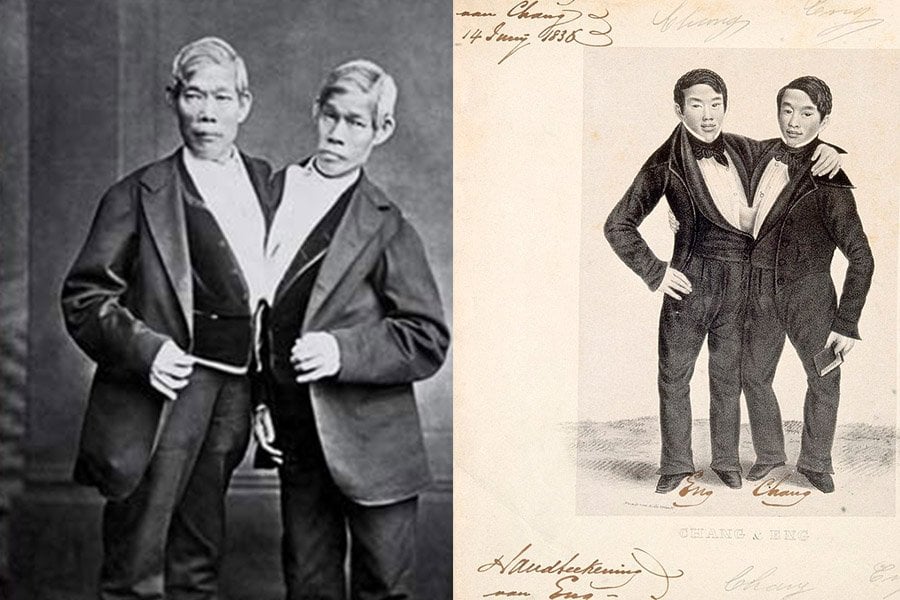 Wikimedia Commons Chang and Eng Bunker were the reason why “Siamese twins” became a synonym for “conjoined twins.”

In 1829, a Scottish merchant named Robert Hunter saw an unusual sight in the water while visiting the Kingdom of Siam (which is now known as Thailand): two boys, conjoined at the sternum, were taking a swim together.

The boys, who were named Chang and Eng Bunker, had been born in 1811 in a small town near Bangkok. They were considered medical marvels — especially since they had almost completely separate bodies save for a small, four-inch bridge of flesh that connected them.

Hunter immediately saw an opportunity to make a profit. He tracked down the twins’ mother, and paid her $500 to exhibit her children as a curiosity on a tour of the world as “The Siamese Twins.”

The brothers toured for three years, doing backflips and playing badminton for enthusiastic audiences. While they were a very popular act, they barely saw any money from their performances and were often treated like property rather than people while they were working with Hunter.

Tired of the exploitation, the brothers ended their contract with Hunter once they turned 21. For years afterward, they ran a show of their own, where they were able to earn their own money and perform on their own terms.

Still, they didn’t like being gawked at and quit performing in freak shows and circus performances altogether. They decided to become American citizens and bought a plantation in North Carolina.

But even though they were through with being exploited, this didn’t stop them from running their plantation off the backs of enslaved people. The brothers owned 18 slaves, many of whom had been bought as children.

Eventually, Chang and Eng Bunker married a pair of sisters — and they soon started families. Between the two of them, they fathered 21 children.

But things began to go downhill for them after the Civil War. They had invested a fortune into the Confederate States of America — which obviously did not pay off. The brothers ended up bankrupt, with Chang taking the news especially hard. He began drinking heavily and suffered a stroke in 1870.

In 1874, Chang caught bronchitis and died in his sleep. Eng awoke to find his brother dead. Within hours, Eng had passed away as well.