Fridtjof Nansen: The Nobel-Prize Winning Humanitarian Who Was The First To Cross Greenland

He was an arctic explorer, a scientist, and a humanitarian who saved upwards of 7 million people. The biography of Fridtjof Nansen almost defies belief. 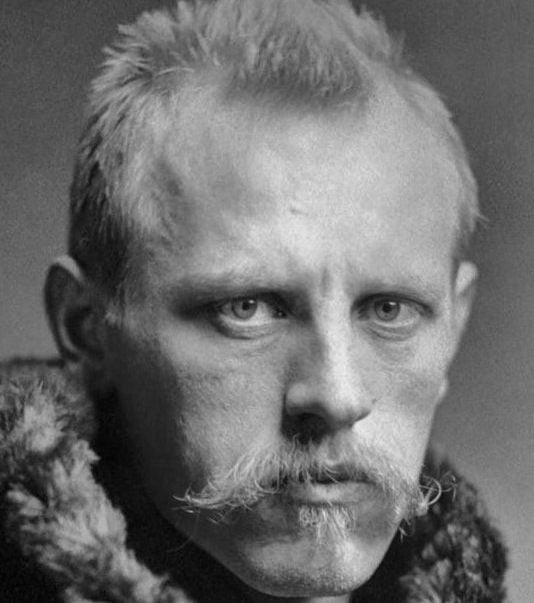 Few historical figures present a resume as varied and magnanimous as Fridtjof Nansen.

He was the first to traverse Greenland, ventured further into the Arctic than any man yet before him, and was an 11-time cross-country skiing national champion. When he wasn’t completing a feat of human endurance, he wrote scientific accounts of his adventures and became deeply involved in the global humanitarian crises in Russia and Armenia.

Nansen was born in Aker, Norway, on October 10, 1861, to Baldur and Adelaide Nansen. Baldur was a religious man who worked as a jurist. His wife had a fondness for the outdoors and snow-shoeing, which was an unconventional interest for a woman of her time.

Though Fridtjof’s parents were strict, they were caring and they worked hard to instill self-reliance and a sense of duty in their son. These would prove to be important qualities for his later adventures and allowed him to persevere where others had failed. 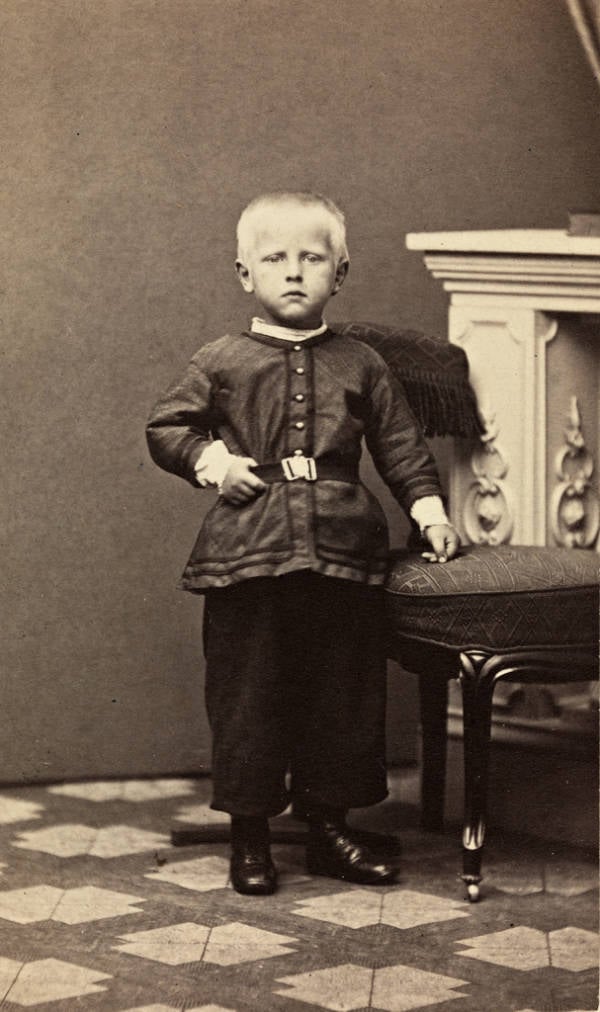 Fridtjof Nansen shared his mother’s love of the outdoors and the Norwegian countryside offered plenty of opportunities for him to develop his physical prowess. Nansen would often force himself into situations that would test his endurance and wander into the wilderness where he would “live like Robinson Crusoe.”

Eventually, he reached the point where he could ski 50 miles in a single day, and at 18 he broke the world one-mile skating record. The next year, he won the national cross-country skiing championship and did so 11 more times.

His athletic skill would become indispensable during his Arctic explorations. 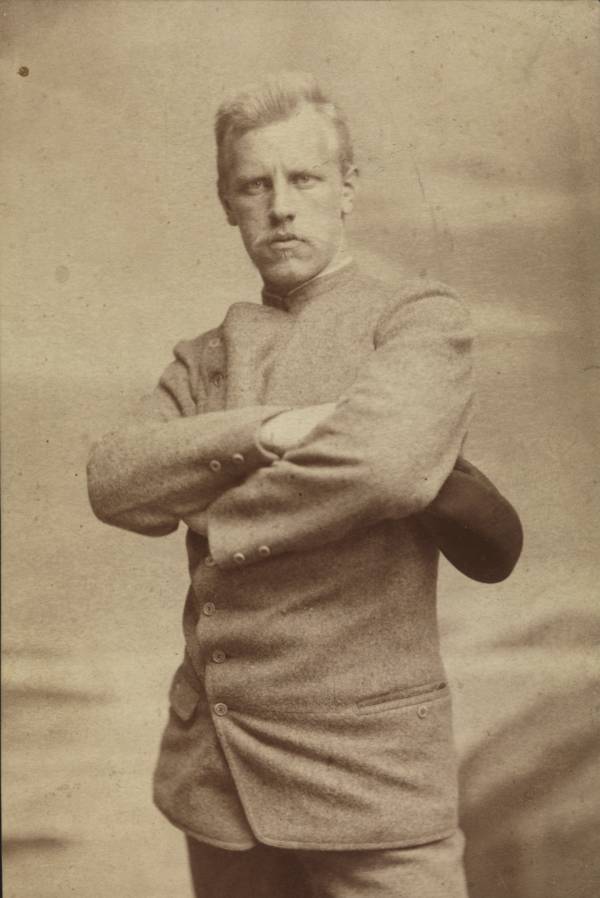 Wikimedia CommonsNansen trained himself to endure physical hardships from a young age.

Nansen enrolled in the University of Oslo in 1881 and decided to study zoology. This brought him the following year on a research expedition in Greenland. For four months, Nansen studied marine life on the sealer, the Viking.

Inhospitable Greenland fascinated Nansen and so in 1887, after he submitted his doctoral thesis, Nansen began a daring adventure into the island’s interior. The knowledge available to the Victorians about the vast majority of the island had changed little since the days of the Vikings centuries earlier — and Nansen was determined to change that. 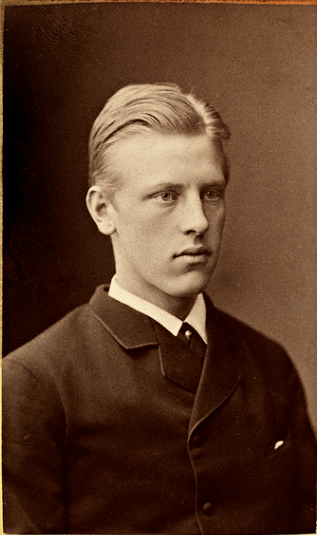 Wikimedia CommonsFridtjof Nansen during his days as a student.

Nansen and his team set off from Iceland in June of 1888. His route was considered extraordinarily precarious, as he decided to start off from Greenland’s sparsely-inhabited east coast and make his way west. Every previous expedition in Greenland had set off from the west, where there were people and supplies, but Nansen explained that he “always thought that the much-praised line of retreat is a snare for people who wish to reach their goal.”

In other words, once the team set off, they would have to push westwards or perish, having no safe haven waiting for them back east. 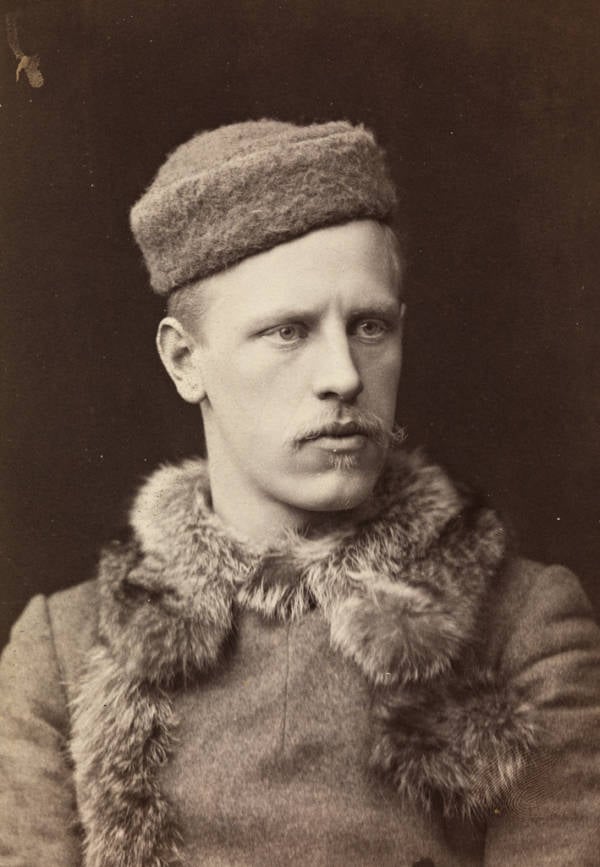 Wikimedia CommonsFridtjof Nansen was undaunted by the prospect of subzero temperatures and near-total isolation in the snow.

Nansen’s gamble paid off, though, and by October of the same year, he and his team safely arrived at an Eskimo village on the west coast. They survived temperatures as low as -49 degrees Fahrenheit and traversed nearly 2,500 miles on sleds and skis. They were the first explorers to traverse Greenland.

A Wife And The North Pole

Nansen took a brief hiatus from his adventures to wed Eva Sars in September of 1889. Eva was, like his mother, an unconventional woman for her time. A famous mezzo-soprano singer in Norway, Eva was also a pioneering skier. She was likely the first woman to cross the Hardangervidda mountain plateau on skis alongside Nansen.

In the early years of his marriage, Nansen wrote and published his accounts on the Greenland exploit. But the quiet life did not last. Four years later, he set out on another equally daring expedition this time to the North Pole.

Nansen had long been fascinated by the theory that there was a polar ocean current that moved from east to west, an idea which contradicted the prevailing notions of Arctic explorers of the day. Nansen came up with a revolutionary plan that involved heading towards the pole from the east, then allowing the drift of the current to pull his ship the rest of the way. 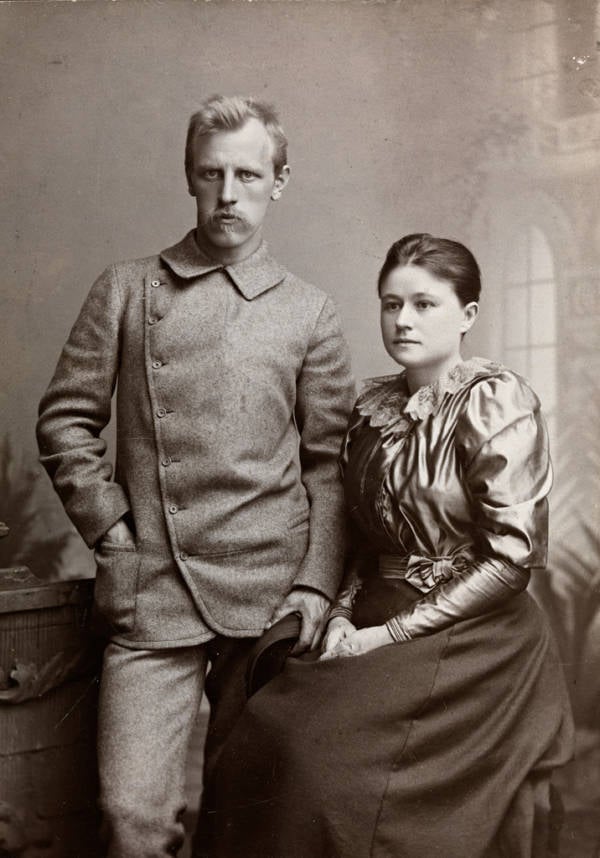 On June 24, 1893, Nansen and the crew of the Fram set off from Vardø on Norway’s northern tip. It didn’t take long for Nansen’s theory to prove correct; the wooden ship was carried hundreds of miles on the current. The drift, however, was not as straightforward as Nansen had hoped and sometimes the ship was carried in unpredictable directions. 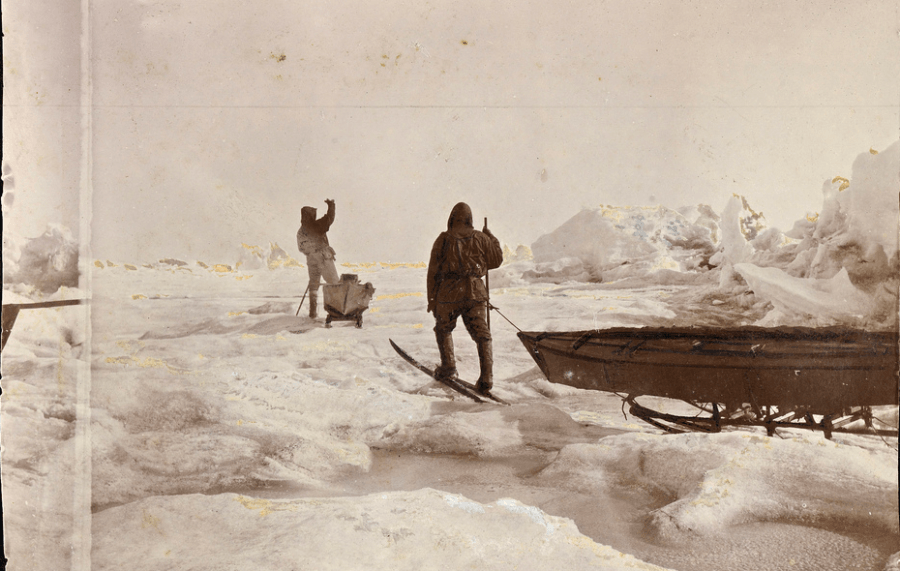 National Library of NorwayNansen exploring the arctic with his dog sled.

In March of 1895, realizing the Fram was not as close to the pole as he had predicted and was moving too slowly for Nansen to reach the pole in a sensible amount of time. He thus made the decision to set off with only one other crew member, Hjalmar Johansen, and continue North on dog sleds.

Kayaks had to be built onboard the ship and on March 14, 1895, the pair disembarked from the Fram and ventured into uncharted territory. There was nothing but the blue of the horizon to break up the empty whiteness of the snow-covered landscape. Besides the potential danger of hypothermia or attack by a polar bear (or walrus, as it turned out), the men also ran the very real risk that their supplies would simply run out before they could return. Yet despite this, the two persevered. 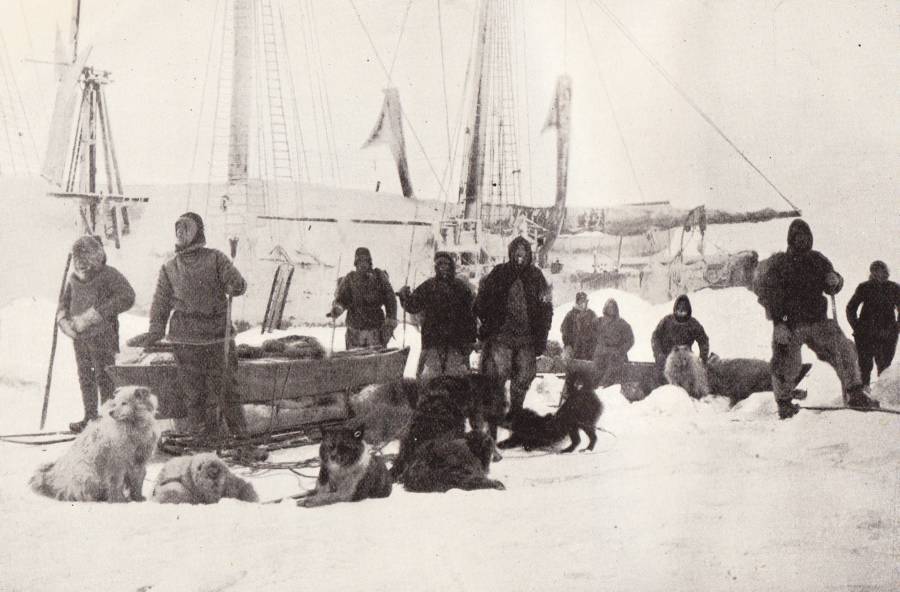 Wikimedia CommonsNansen and Johansen set off on their sleighs.

Nansen and Johansen traveled 140 miles over 23 days in the frozen tundra and, although they were forced to turn back before they reached the North Pole, they had gotten closer than anyone else had before. After spending the winter in a crude hut they had constructed in Franz Josef Land, the pair made their way home to Norway after an extraordinary “Stanley-Livingstone“-type encounter with the British explorer Frederick Jackson smack in the middle of the frozen wasteland. 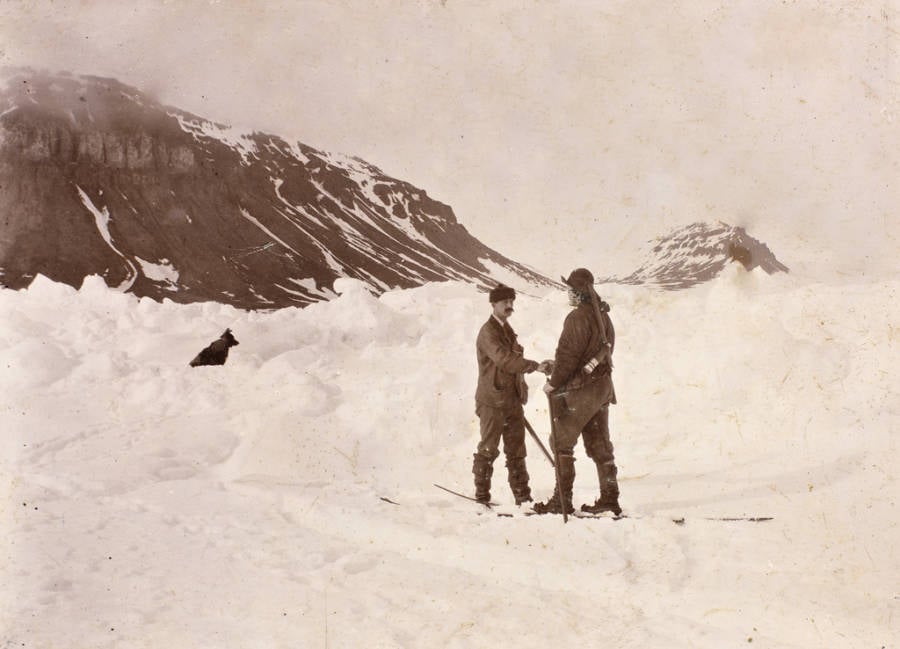 Wikimedia CommonsNansen had a stroke of tremendous good luck when he met British explorer Frederick Jackson in the middle of the Arctic.

The Fram and the rest of the crew had, in the meantime, endured a harrowing three-year voyage through the ice packs of the Arctic Ocean. The ship made a triumphant return to Vardø in September of 1896.

Fridtjof Nansen published his account of his Arctic adventures across six books. His explorations had resulted in a tremendous wealth of new research and the explorer was considered the leading expert on the polar regions. Over the next 15 years, he would make several other research voyages that produced important new information about the oceans.

The Humanitarian Work Of Fridtjof Nansen And Later Life 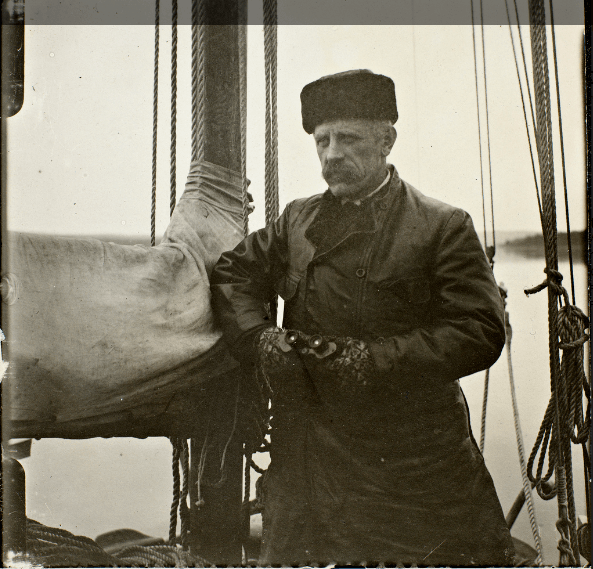 National Library of NorwayAlthough he did not reach the North Pole, Nansen had traveled further North than anyone on record by that time.

Nansen’s explorations were brought to a swift halt at the outbreak of World War I in 1914. Not one for sitting idly at home, Nansen headed the Norwegian Union of Defense. Although Norway had declared neutrality, the country’s food supplies became threatened by blockades as the war went on.

Things became exceptionally critical in 1917 after the United States entered the war and imposed severe trade restrictions, prompting Nansen to travel to Washington himself and negotiate an agreement that eventually resulted in a relaxation of the blockade to allow vital food supplies to reach his home country. 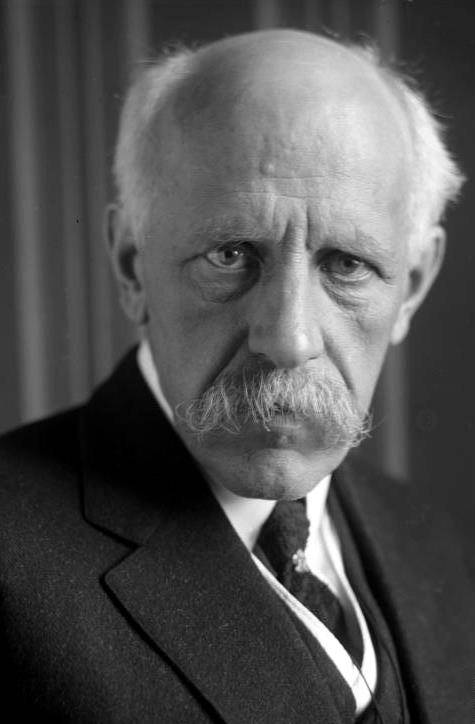 After the war ended, Nansen was appointed the president of the Norwegian Union for the League of Nations and attended the Peace Conference in Paris, where he was a fervent lobbyist and argued strongly for the recognition of the rights of smaller, less influential countries.

In 1920 he helped repatriate nearly half a million prisoners of war at the League’s request and in 1921 he nearly single-handedly organized relief efforts for victims of famine in Russia, saving an enormous number of lives, estimated between seven and 22 million. 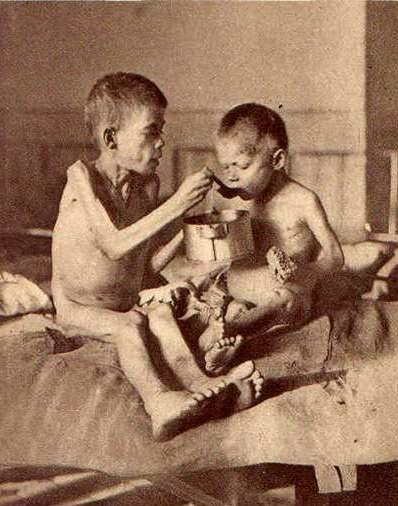 Wikimedia CommonsNansen himself took this photo of two Ukranian boys suffering from the famine as part of his efforts to raise awareness and money for their relief.

One of Nansen’s most important humanitarian efforts was his development of the “Nansen Passport.” In the aftermath of the war and the Russian Revolution, there were hundreds of thousands of refugees who lacked the necessary identification and documentation to emigrate due to the turmoil in their homelands.

Fridtjof Nansen solved this problem by issuing a special passport to these “stateless persons” which enabled them to cross the borders of any country whose government accepted the Nansen Passports, of which there were quickly more than 50. 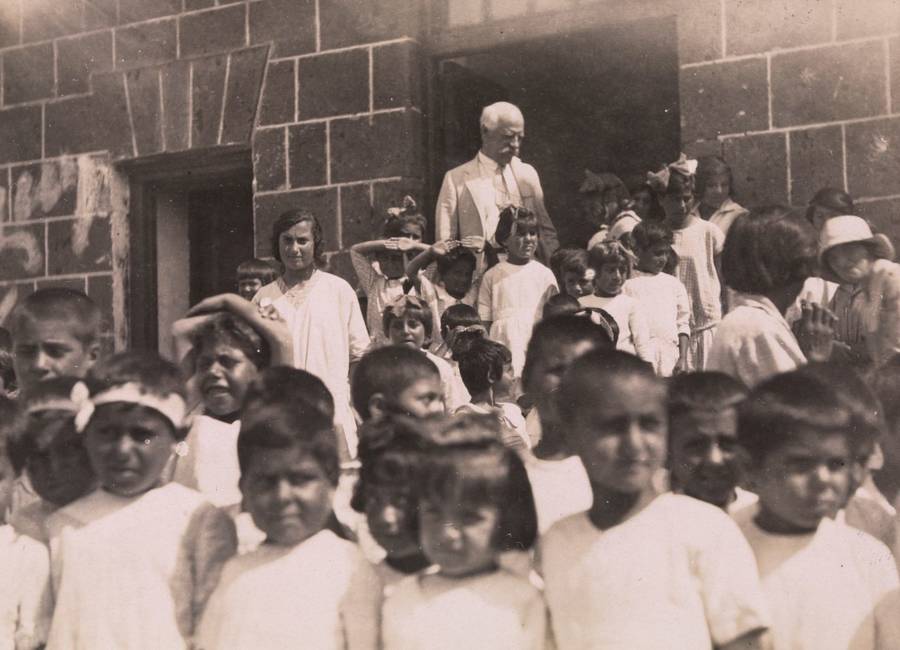 Wikimedia CommonsNansen stands with a group of Armenian orphans.

For his “work for the repatriation of the prisoners of war, his work for the Russian refugees, his work to bring succor to the millions of Russians afflicted by famine, and finally his present work for the refugees in Asia Minor and Thrace,” Fridtjof Nansen was awarded the 1922 Nobel Peace Prize.

The famed arctic explorer passed away from a heart attack in 1930. His passing was marked by tributes not only in Norway but all over the world, all in recognition of the tremendous humanitarian services he provided.

After this look at explorer and humanitarian Fridtjof Nansen, read about another famous explorer who raced to the North Pole, Roald Amundsen. Then, read more about the Armenian genocide whose victims Nansen helped.