Frito Bandito was the animated mascot for Fritos Corn Chips from 1967 to 1971. It was the brainchild of Tex Avery, one of America’s most famous cartoonists responsible for the likes of Bugs Bunny, Porky Pig, Daffy Duck and Speedy Gonzales.

Frito Bandito As A Mexican Stereotype

But for about four years, Frito Bandito was also one of the most racist product mascots.

In one spot, he sings a song about wanting to take his corn chips from the viewer. He’s wearing a sombrero, has a thin mustache, and carries to six-shooter pistols on his hips. “Give me Fritos Corn Chips and I’ll be your friend. The Frito Bandito you must not offend!”

The mascot then takes a bag of Fritos and puts it underneath his hat as if he’s stealing it. Meanwhile, he sings and speaks in broken English with a thick accent.

The print ads were worse. Kids would see Frito Bandito with a wanted poster and a mug shot. The ads warn them to protect themselves from Frito Bandito and his horrible corn chip-stealing ways. 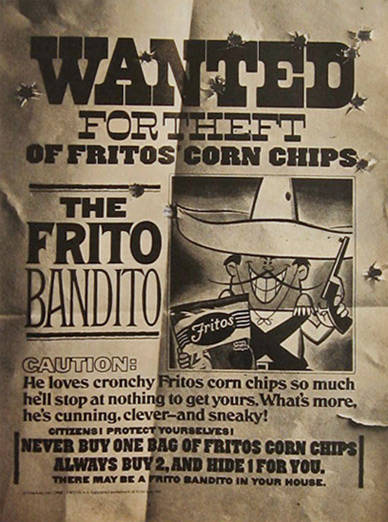 In this color TV spot, Frito Bandito offers someone silver and gold to buy a bag of Fritos. Then, he twirls his pistols around and says, “You like better some lead, hah?”

Again, Frito Bandito is shown as an outlaw who loves to make threats. In another commercial, the bandito says the Fritos Bureau of Investigation (F.B.I., get it?) is after him because he’s a bad man. Somehow, this stuff sold a lot of corn chips in the late 1960s and early 1970s. Kids (or their parents) related to an outlaw and a bandit in cartoon form.

Ads like this were commonplace because racism was more overt in American culture then.

The Frito Bandito ceased his antics in 1971 after pressure from Mexican-American advocacy groups. Historians note the irony in the ads in that Frito-Lay likely took a Mexican corn chip recipe and turned it into an American icon. Perhaps Frito Bandito was out for justice.

Racist Mascots Still In Use

Shoppers in the pancake aisle have only to look at Aunt Jemima since around 1889, depicted as a black woman in a servant role. A former slave even posed for the initial drawings of Aunt Jemima, and those drawings evolved into the ads and syrup bottles consumers see today.

When consumers head to the rice aisle, there’s Uncle Ben’s Rice. Uncle Ben is an elderly black man wearing something akin to what a butler would wear, hinting at some sort of servant role. Anti-discrimination advocates say the title of “Uncle” is pejorative and reminiscent of slavery. While not quite as blatant as Frito Bandito, these product mascots also cross a cultural line.

Next, check out these 31 appallingly racist ads from decades past. Then learn about the racist origins of the most famous ice cream truck song.