Meet Gaston Means, The Swindler Who Loved Ripping Off Bootleggers During Prohibition

Gaston Means used his connections to President Warren Harding to convince bootleggers that he could protect them from the law for a price — and pocketed up to $60,000 a day. 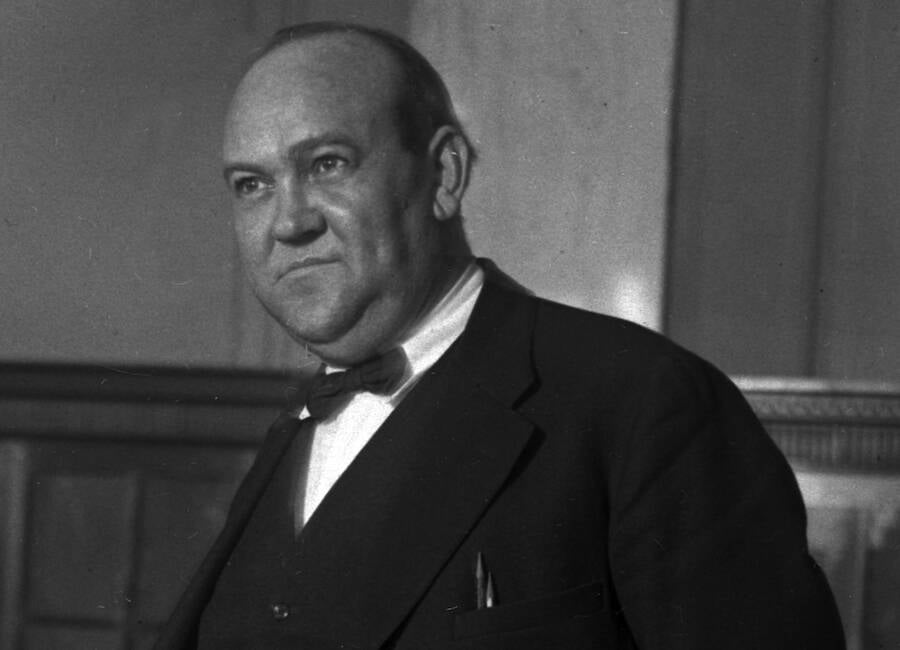 Daily News/NY Daily News Via Getty ImagesGaston Means was one of the most shameless grifters of the 1920s and 1930s.

Gaston Means was a natural-born swindler. Though little-known today, this Prohibition-era conman was entangled in some of the highest-profile scandals of the early 20th century.

His talent for fraud, profiteering, and telling shockingly bold lies would touch politicians, kingpins, and even public heroes.

An Early Fondness For Crime

Gaston Bullock Means was born into a wealthy Southern family near Concord, North Carolina, on July 11, 1879. Although he was a bright boy, he inherited the nastiness his father and grandfather had been known for, and neighbors later described Means as “meaner than hell.”

Means himself later claimed that his earliest happy memory was stealing money from his mother’s purse and then gleefully looking on as a maid in his home was fired for the theft.

After a short stint at the University of North Carolina and working as a salesman, Means’ natural talent for trickery drew him to detective work. In 1914, he joined William J. Burns’ detective agency in New York. Burns was the former chief of the U.S. Secret Service.

In 1915, Gaston Means attracted national press when he was found scheming to produce a propaganda scoop for the Germans (a scheme which failed). But he later rationalized his partnership with the Germans by claiming it went on before the U.S. had entered the war.

While working with the Germans, he was also involved in another dupe that actually led to the death of his victim. After a brief period of swindling wealthy widow Maude King out of her fortune, he invited King on a short hunting trip, during which she mysteriously got shot.

A coroner’s jury ruled her death as an accident, but the circumstances were so suspicious that Means was later put on trial. But he was acquitted after he claimed that King committed suicide — and that the case against him had been put together by German espionage agents. 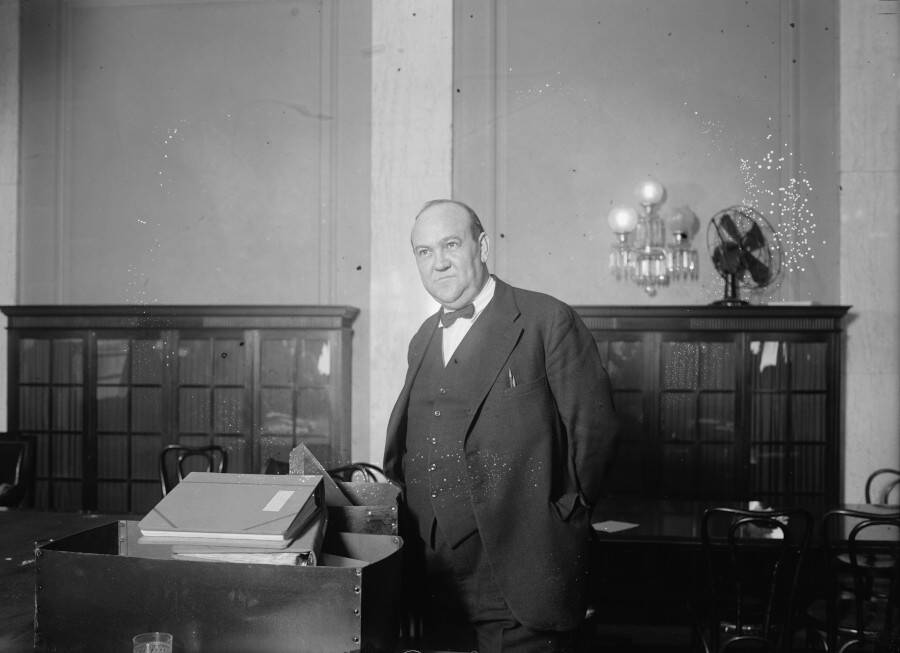 Gaston Means had a talent for always being in the right place at the right time, as well as being able to lie his way out of the wrong one. In 1921, Means’ former boss, William J. Burns, was appointed to head the Justice Department’s Federal Bureau of Investigation. Burns brought Means along as an investigator, appreciative of his talents as a detective.

At the time, President Warren Harding had perhaps unknowingly brought along a crew of crooks when he came to Washington that later came to be known as the Ohio Gang. These were the men who were loosely associated with Harding’s attorney general, Harry Daugherty.

These small-time politicians and opportunists had gathered around the new president and had been his cheerleaders when he called for a return to “normalcy” after World War I. But what they were really after were opportunities for bribes, insider information, and other corrupt activities.

Means fit right in with the group. He ended up working under Jess Smith, a hanger-on of Daugherty. And before long, Smith and Means were running a successful swindle in the midst of the Prohibition.

Means would use his skills as a detective to gather information on bootleggers, and Smith would help arrange meetings with them, during which he would offer them protection from the law – for a price.

Meanwhile, Means collected payments through a fishbowl in an empty hotel room, into which his customers would deposit as much as $60,000 per day. He always looked on from a hiding spot. 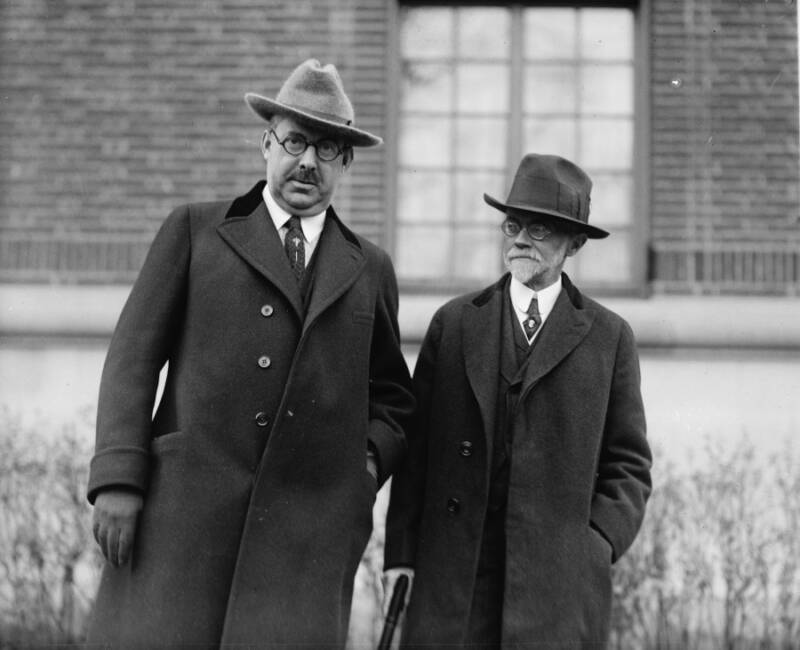 It seemed as though the profits of corruption would never end, but little did they know that the Federal Bureau of Investigation was about to receive a startling makeover.

“The Department of Easy Virtue,” as the Justice Department was nicknamed at the time, was a natural home for Gaston Means, a fraudster and compulsive liar who loved ripping off bootleggers.

A prime opportunity came in 1922, when George Remus, perhaps the most successful bootlegger in the country, got caught violating the Volstead Act, otherwise known as the National Prohibition Act.

Means saw this as a chance to line his pockets. He approached Remus and told him he could fix his case on appeal. All it would cost him was $125,000. But Remus went to prison anyway.

Though not everyone fell for Means’ tricks, he continued making money from schemes like fraudulently selling glass coffins. Before long, people started to turn on him, even people like Daugherty. Then, Means’ greatest enemy pounced. 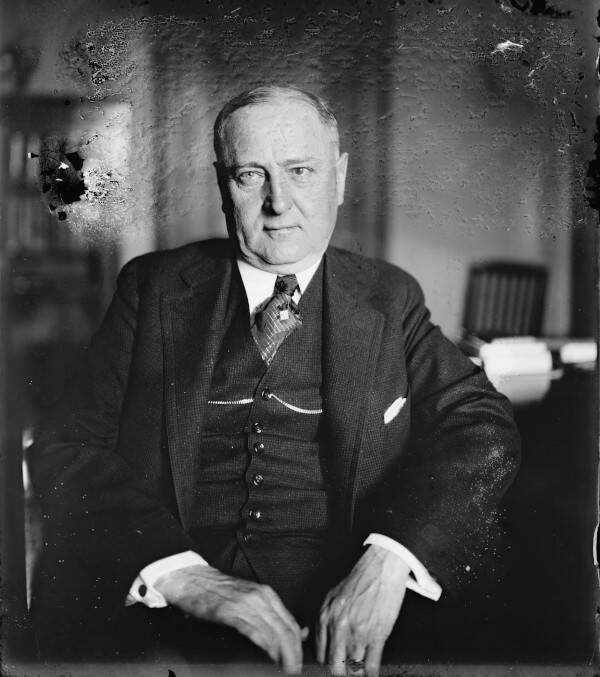 Library of CongressAttorney General Harry Daugherty. Circa 1921 to 1924.

J. Edgar Hoover had been a rising star in the Federal Bureau of Investigation. As an honest official, he was disgusted by the blatant corruption that took place during the Harding administration.

He especially loathed Means, who was known for tricks such as hiring a made-up investigator to pocket the imaginary person’s salary and working as a customs official when he’d been suspended from the Justice Department, all while continuing to occupy an official office.

With Hoover’s hatred guiding them, prosecutors convicted Means of violating the Volstead Act in July 1924. He received a sentence of two years’ imprisonment and a $10,000 fine. 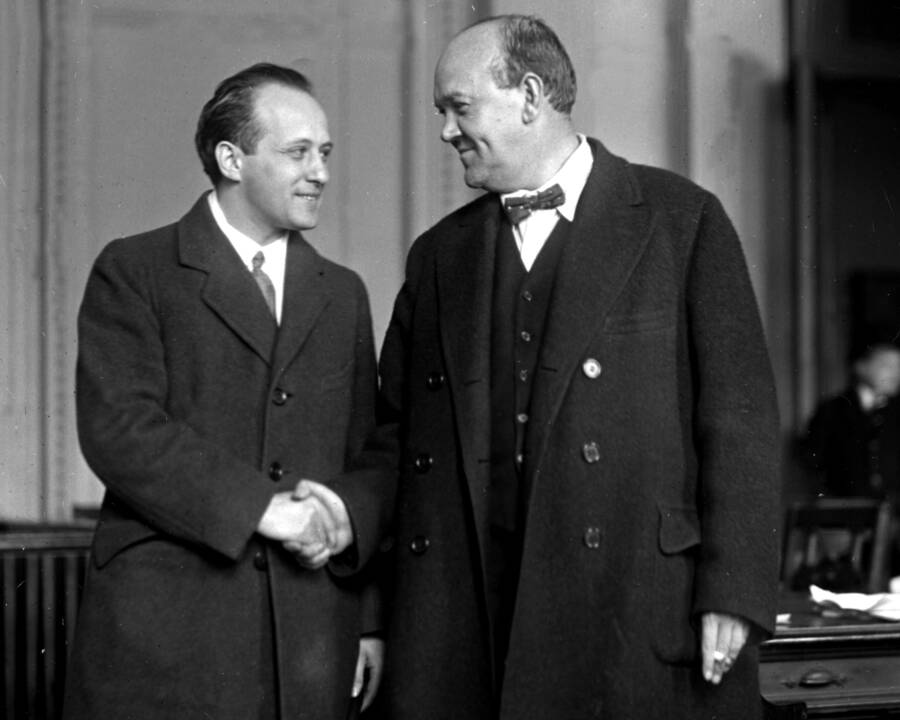 Even in prison, Gaston Means was still known as a trader of secrets. But he struggled to find ways to remain relevant in America.

While behind bars, Means’ most notable achievement was a ghostwritten libelous book about President Harding, which falsely claimed that his wife had poisoned him.

However, one last swindling adventure awaited Means after he was released. When the infant son of Charles Lindbergh was reported missing, the story gripped the nation in panic and speculation. So Means sat up and paid attention, wondering how he might profit off of the mystery.

He used his connections to introduce himself to wealthy socialite Evalyn Walsh McLean and Lindbergh cousin Captain Emory Land. Means convinced them that he could use his underworld contacts to locate the missing Lindbergh baby, provided they pay him with the necessary funds. 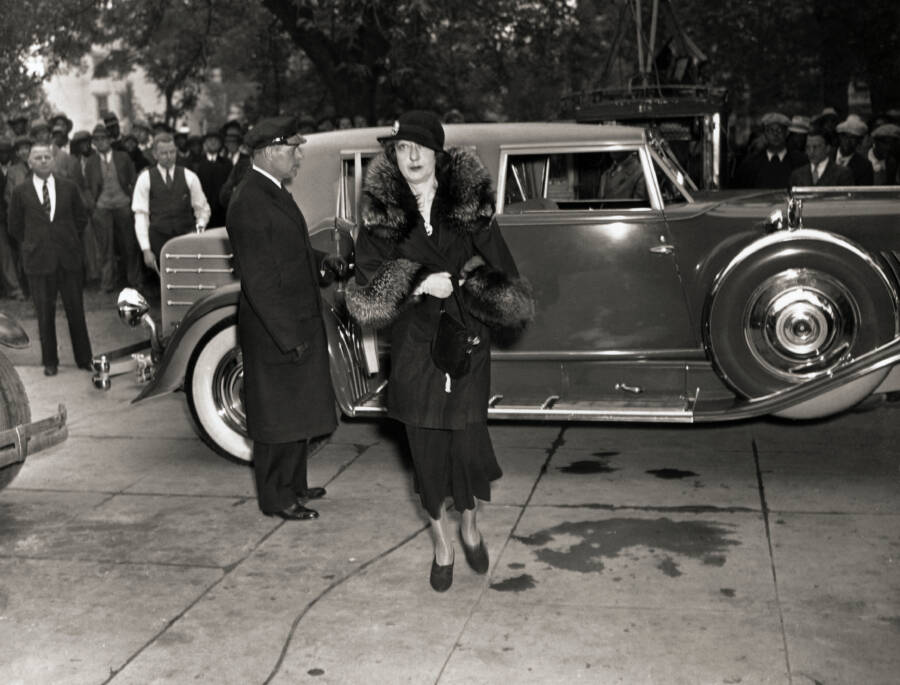 Bettmann/Getty ImagesEvalyn Walsh McLean enters District of Columbia Supreme Court to attend the trial of Gaston B. Means and Norman T. Whitaker, who were charged with conspiracy to defraud her. 1933.

Escaping with the $104,000 McLean gave him, Means had a friend feed her false information about the fantastic chase he supposedly undertook in the search for the baby — who was ultimately found dead months later.

But Gaston Means’ downfall actually came when he demanded another $35,000 to complete the search. McLean’s suspicious lawyers informed the FBI, and Hoover was more than happy to help take Means down.

Found guilty of larceny after trust and sentenced to another 15 years in prison, Means suffered from poor health, estrangement from his fellow prisoners, and the final demise of his reputation.

On December 12, 1938, the most brazen swindler of the early 20th century died in prison at age 59 after a series of gallbladder issues and heart failure.

After decades of obscurity in true crime books, Gaston Means was restored to the popular imagination with a portrayal by Stephen Root in HBO’s Boardwalk Empire in 2012.

The show’s version of Means is one of the few characters whose biography the writers didn’t change much.

The fictional Means is a secretive Southerner who takes bribes from bootleggers by way of a fishbowl, and has no scruples about corruption from behind the curtain.

The character is more than happy to pit two sides against each another and is always seeking to fill his pockets. As many historians know, the fictional depiction is not far at all from the truth.

Now that you’ve learned the incredible tale of Gaston Means, you can find out more about the tragic events of the Lindbergh kidnapping. Then, see what the world looked like on the day that Prohibition ended.