After a man from Georgia came across a mysterious sea creature on the shore, everyone was from locals to marine experts are weighing in on what the strange creature could be. 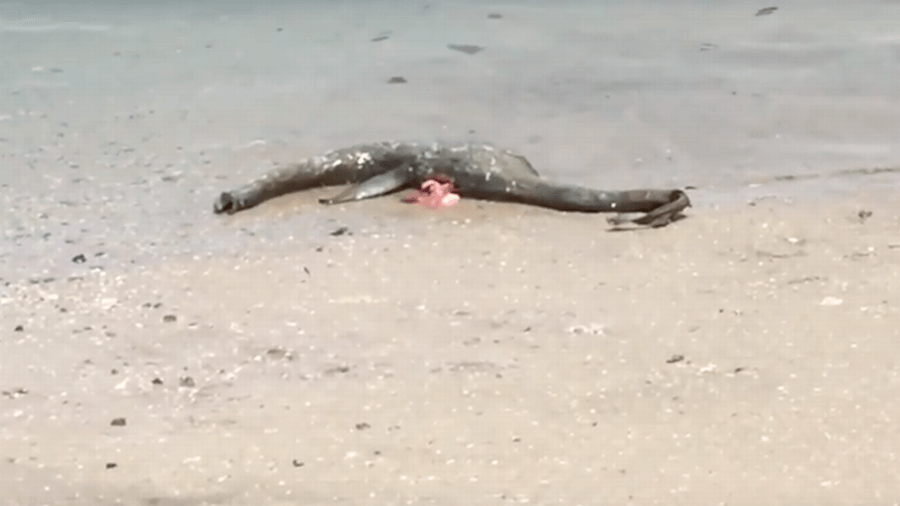 The OlympianThe unidentifiable sea creature on shore of Georgia beach

Jeff Warren of Waycross, Ga. was walking with his son along Wolf Island Beach in Georgia when he spotted something washed up on the shore. A heron bird was pecking at the carcass. Warren’s first assumption was that it was a dead seal, but after inching closer, the creature turned out to be something far more mysterious.

Almost prehistoric-looking, the carcass appears to have an elongated neck and a small head. After seeing the photos and video Warren captured, area residents immediately were reminded of the local legend of “Alty,” or Altahama – their own version of the Loch Ness Monster. Since the 1830s, townspeople have periodically claimed to spot a giant sea creature known as Alty.

Warren saw the creature on March 16, and it hasn’t been officially identified yet by experts. But many have speculated on what it could be.

Twitter users chimed in with their suggestions, which ranged from Water Demogorgon, to a sea lamprey, to a baby Nessie, to an alien from Star Wars.

Meanwhile, Chantal Audran, a one marine scientist at the Tybee Island Marine Science Center said, “It looks like a deep-sea shark, like a frilled shark. Although I don’t see gill slits.” Mark Dodd of the Georgia Department of Natural Resources seconded the opinion.

Tara Cox is an Associate Professor of Marine Sciences at Savannah State University and guessed the creature was actually a basking shark, which “looks surprisingly like a mythological/prehistoric sea serpent when it decomposes.”

Dwight and George Gale are brothers and shrimping boat captains with another take on what the mysterious creature could be.

“It looks like a fish is on a piece of wood and its guts have been pulled out,” George Gale said.

Director Dan Ashe of the U.S. Fish and Wildlife Services didn’t name the creature, but said that some sea animals have a way of decomposing where they can resemble a Plesiosaur.

So when will marine biologist be able to identify Warren’s finding? Maybe they won’t be able to at all. As the Twitter user who described it as a baby Nessie said in her tweet, “the seas have a lot of mysteries.”

If you found this story interesting, you might be interested in a huge sea creature that washed ashore in Indonesia and turned the water red. Then check out, this mysterious sound scientists identified coming from the Marianas Trench.