The Strange History of Gereja Ayam, The Chicken Church Of Indonesia

Though it was supposed to resemble a dove, the church ended up looking more like a chicken. 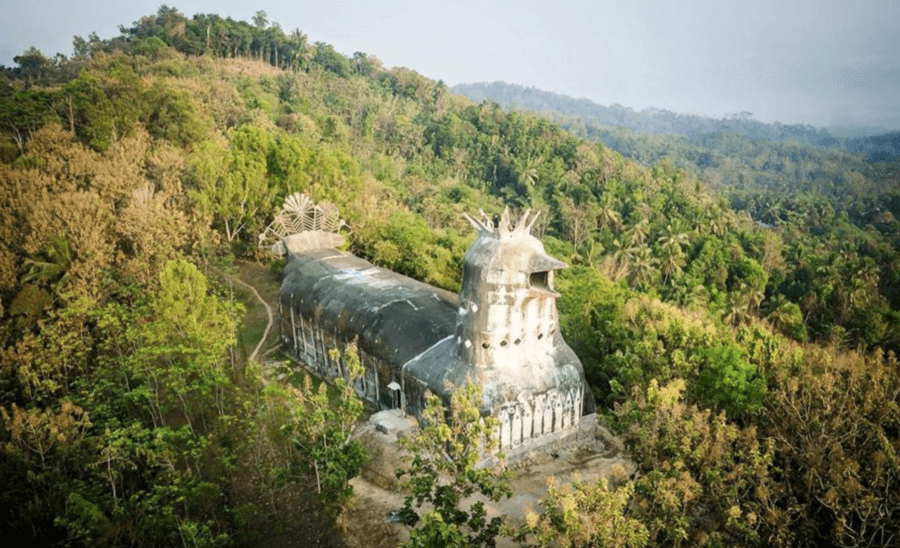 Daniel Alamsjah’s wife is from the Magelang area on the island of Java, Indonesia. It’s an area that Alamsjah had visited before, and they, for the most part, had been unremarkable trips. But one night, working hundreds of miles away in Jakarta in 1989, Alamsjah received a vision: a dove resting on top of a hill, and a voice clearly telling him to build a house of prayer for all people to come and worship in the hills near Magelang.

Alamsjah tried to dismiss the vision, but he was unable to forget about it.

Indeed, nothing may have come of it, except the following year, in 1990 he visited the Magelang area, this time with an employee who was also from the area. The pair visited Rhema Hill, and Alamsjah was shocked to find it was the exact same view from the same hill he had seen in his vision. Now unable to dismiss the vision, he prayed and read the Bible for guidance. 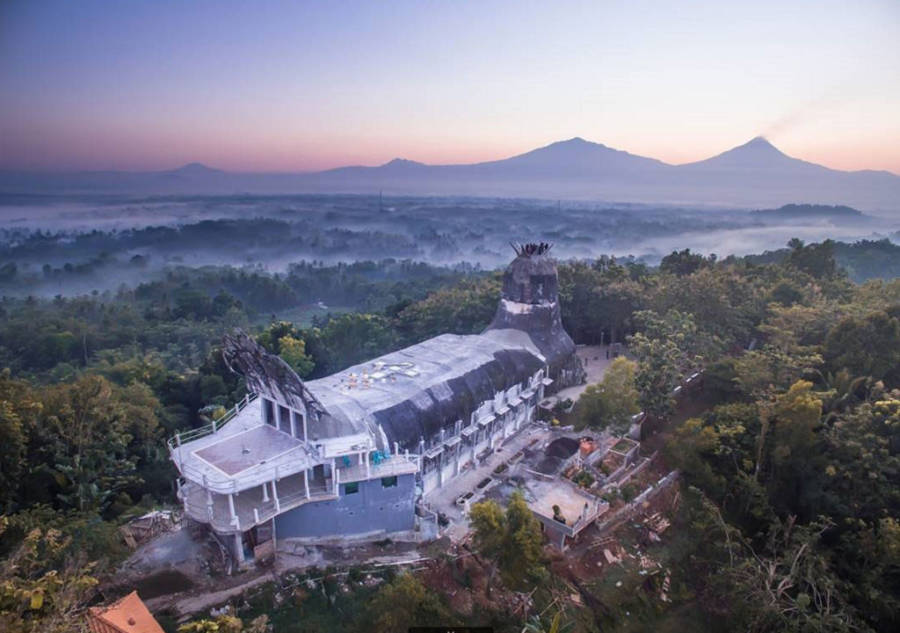 FlickrThe back of Gereja Ayam.

He came across the Bible verse Isaiah 2:2. “In the last days, the mountain of the Lord’s temple will be established as the highest of the mountains; it will be exalted above the hills, and all nations will stream to it.”

This finally convinced him that his vision was not a mere hallucination, but a true calling from God. Two weeks later, he bought a plot of land on Rhema Hill and began construction on his place of worship. Staying true to his vision, he wanted to make sure it was a place where all would be welcome. Christians, Muslims, Buddhists, even atheists would all be welcome to worship at the temple.

However, almost as soon as he began construction, he ran into trouble. Alamsjah is a Christian man, and the Muslim neighborhood in the surrounding Magelang area did not know or did not care that the temple he was building was not exclusively a Christian place of worship. Some resentful local residents began filing complaints against the building of the church, which slowed his progress down.

He began to run out of money, and in the year 2000, construction on the prayer house stopped entirely. He could not afford a caretaker, so the whole building began to fall into disrepair. 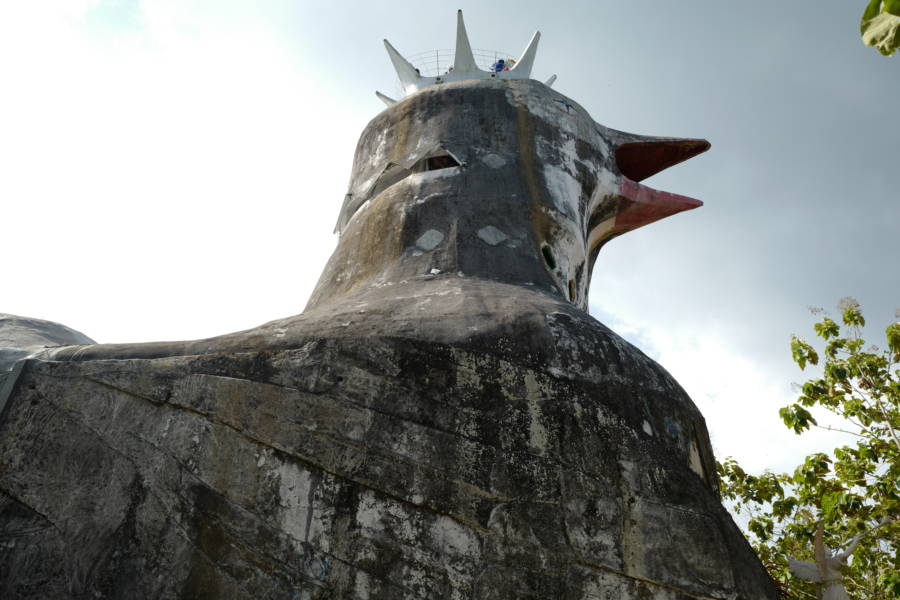 He had insisted that the church be shaped like a dove, to match the dove that came to him in his vision, including a crown to resemble its holiness. The design, however, came out a little differently than imagined. To most people passing by, the structure did not look like a dove at all. Instead, the crown reminded most people of a rooster crest. By the time constriction ceased, the whole structure instead resembled a giant chicken.

However, that may have been a blessing in disguise. The structure became known as “Gereja Ayam,” which translates into “Chicken Church.” It began attracting tourists who had heard about the unique church shaped like a chicken and wanted to see it for themselves.

More and more people began to visit, taking pictures and spreading the word of the unique architecture. And the more popular it became, the more money Alamsjah was able to make by charging admission to go inside. Although the admission prices were cheap, not more than one U.S. dollar, enough people were drawn to the structure that he was able to make enough money to reinvest in renovating the rooms in the church. 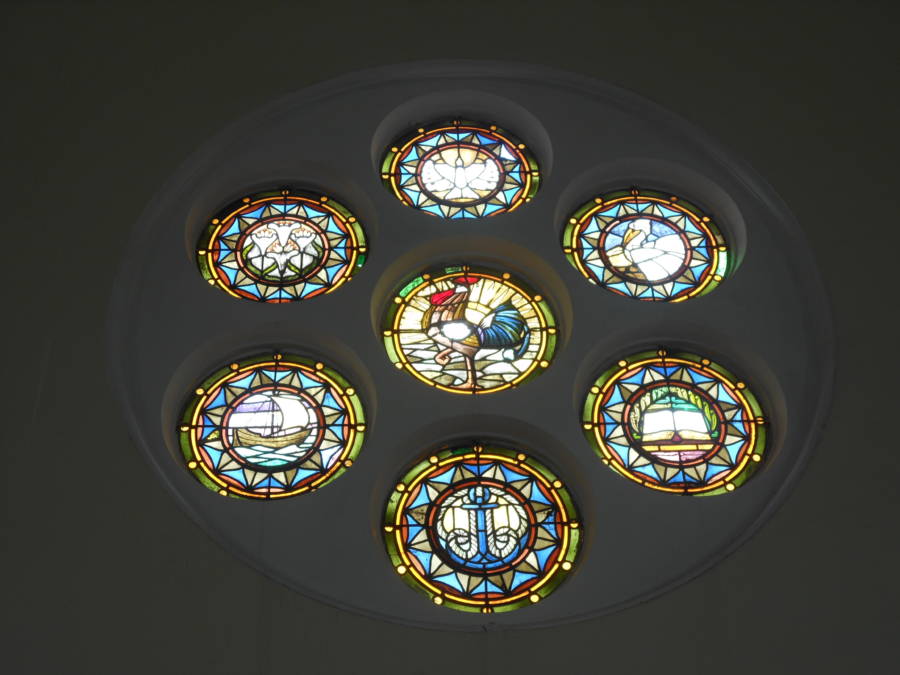 FlickrThe windows of the Gereja Ayam.

As of this year, Alamsjah was finally able to finish construction on the windows and pave the roads. The surrounding grounds are being tended to again, and the underground prayer rooms have been refurbished. It’s become a bright and vibrant tourist attraction, with murals from local artists decorating the walls. There is even a café in the back, where tourists can sit back and enjoy traditional Indonesian treats inside the body of the giant holy Chicken.

Next, check out the Unification Church that does mass wedding ceremonies. Then, read about the strange rituals of the Palmarian Church.