Giovanni Falcone: The Judge Who Took On The Sicilian Mafia And Paid With His Life

Giovanni Falcone dedicated his life to fighting the Mafia. He always knew he'd die for his crusade — and ultimately he did. 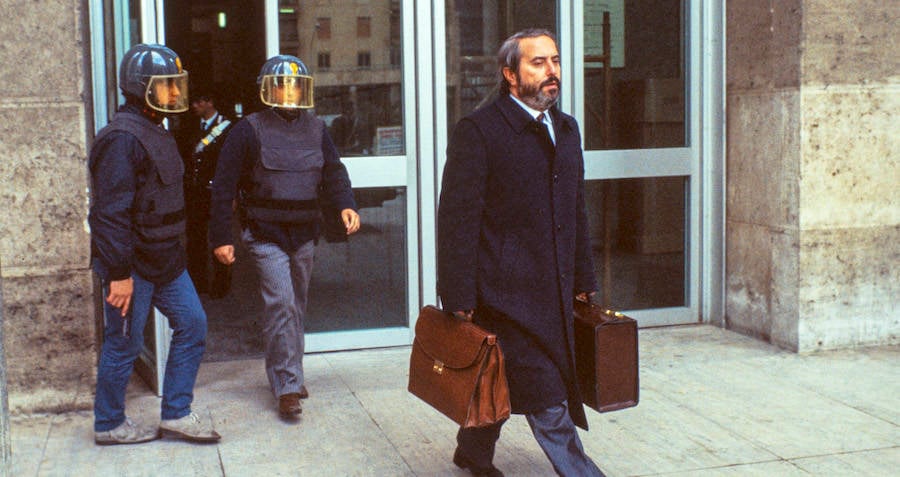 Vittoriano Rastelli/Corbis via Getty ImagesGiovanni Falcone is escorted by police out of the Court of Palermo, Italy, on May 16, 1985.

On May 23, 1992, Giovanni Falcone — one of Italy’s most important prosecutors — was assassinated in broad daylight by the Sicilian Mafia (La Cosa Nostra). Falcone’s murder was executed via a car bomb filled with more than a half-ton of explosives, and it came not long after he had presided over the historic Maxi Trial against the Mafia.

Throughout that trial and for much of his adult life beforehand, Giovanni Falcone had fought the Mafia with all his might. He was always sure that such a dangerous endeavor would cost him life. And, in the end, he was right.

Born into a poor district of Palermo, Sicily, Giovanni Falcone had a childhood marred with horrors perpetrated by the Mafia — which helped encourage his drive to thwart these criminals as an adult.

Falcone studied law at the University of Palermo and graduated in 1961. He practiced law for just three years before he became a judge in 1964.

Assigned to investigate bankruptcy cases, Falcone soon traced much of the corruption back to Mafia bosses and his initial prosecutions led to the death of a chief magistrate thanks to Mafia retaliation.

By 1980, Falcone had indoctrinated himself in the world of anti-Mafia law through the Office of Instruction — the investigative branch of the Prosecution Office of Palermo, Sicily’s capital.

Falcone joined this branch during an especially dangerous time in Palermo. Not long before his arrival, La Cosa Nostra had assassinated Judge Cesare Terranova and head of police Boris Giuliano — both of whom were leading prosecutors in the Mafia’s drug trafficking operations, among other crimes. They had presided over the branch that Falcone had just joined. In some respects, Falcone may as well have signed his own death warrant the day he joined Palermo’s Prosecution office. 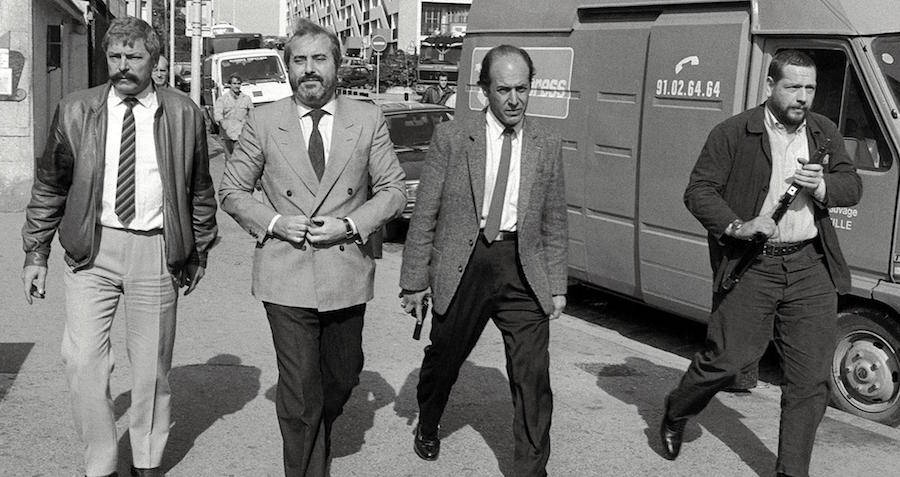 GERARD FOUET/AFP/Getty Images Giovanni Falcone (second from left), surrounded by armed bodyguards, arrives in Marseille on Oct. 21, 1986 to meet his French counterparts in charge of the investigation of the Mafia “Pizza Connection” criminal plot.

But Falcone’s passion for anti-Mafia investigative work proved stronger than his fear of death. Giovanni Falcone said that death was “no more important to me than the button on my jacket- I’m a real Sicilian.”

Giovanni Falcone executed all his work for the prosecution office from a bazooka-proof bunker underneath the city’s law courts. His workspace was surrounded by security footage of the halls and rooms around his office. His home reflected the same level of vigilance and wherever Falcone went, he was escorted by a barrage of armored vehicles.

This level of secrecy and security permeated every facet of Falcone’s life. He married his wife in isolation, unaccompanied by family or friends, joined only by the mayor himself who presided over the service. Every effort had to be taken to ensure the safety of not only Falcone himself, but those closest to him.

Falcone’s success as a prosecutor bought him entry into an informal collective, dubbed the Antimafia Pool. The group consisted of select investigators that shared information in an effort to concoct prosecutorial strategies against the mob.

Pool members, judges Paolo Borsellino, Giuseppe Di Lello and Leonardo Guarnotta, all signed off on a non-disclosure contract of sorts, which protected their investigation and themselves from possible Cosa Nostra threat.

The work done by the men of the Antimafia pool informed the biggest trial to ever hit La Cosa Nostra in its centuries-old history: The Maxi Trial.

The Maxi Trial is the most important and effective trial ever brought against the Sicilian Mafia and is widely regarded as one of the biggest trials in history.

It was the first time that the Cosa Nostra’s existence was judicially confirmed, and the significance of this acknowledgment was insurmountable. A total of 474 Mafiosi were indicted for a wide range of crimes, and 360 of those defendants were convicted.

2,665 years of prison sentences were doled out to those defendants — and that’s not even including the 19 life sentences that were given to the leading Mafia bosses and hitmen.

The biggest moment of the trail — besides the indictment of such a significant amount of Cosa Nostra members — was the testimony of Tommaso Buscetta. Buscetta was the first ever Mafia boss to become an informant. Buscetta warned Falcone of his investigations, “This will make you famous, and bring your death.” 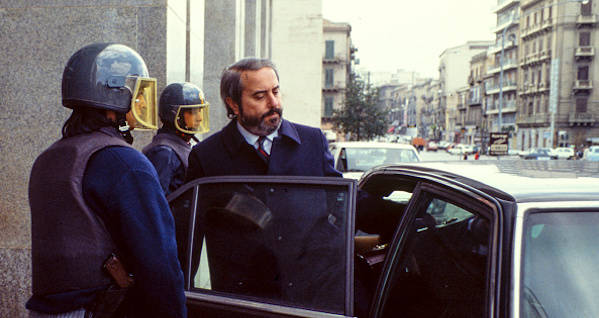 Vittoriano Rastelli/Corbis via Getty ImagesGiovanni Falcone is escorted by police out of the Court of Palermo, Italy, on May 16, 1985.

It was known that the Mafiosi Rosario Spatola and Salvatore Inzerillo moved heroin from Sicily to the Gambino crime family in New York. So Falcone collaborated with Rudy Giuliani, who at the time served the U.S. Attorney for the Southern District of New York. Together they investigated the operations against the Gambino and Inzerillo families.

Giuliani’s work alongside Falcone was instrumental in his cracking the Mafia drug ring in what’s known as the “Pizza Connection” case.

The Assassination Of Giovanni Falcone

Giovanni Falcone’s work both in Sicily and outside of Sicily began to severely frustrate the mob. In June 1989, a sack filled with dynamite was discovered by police near a beach house that Falcone rented out, but for some reason, the bomb never detonated.

Following this assassination attempt, Falcone remarked to a colleague, “My life is mapped out: it is my destiny to take a bullet by the Mafia some day. The only thing I don’t know is when.”

That day came not long after the Maxi Trial convictions were upheld by the Supreme Court in January 1992. As this was a major blow to La Cosa Nostra’s power, the council of top bosses felt they needed to retaliate accordingly. 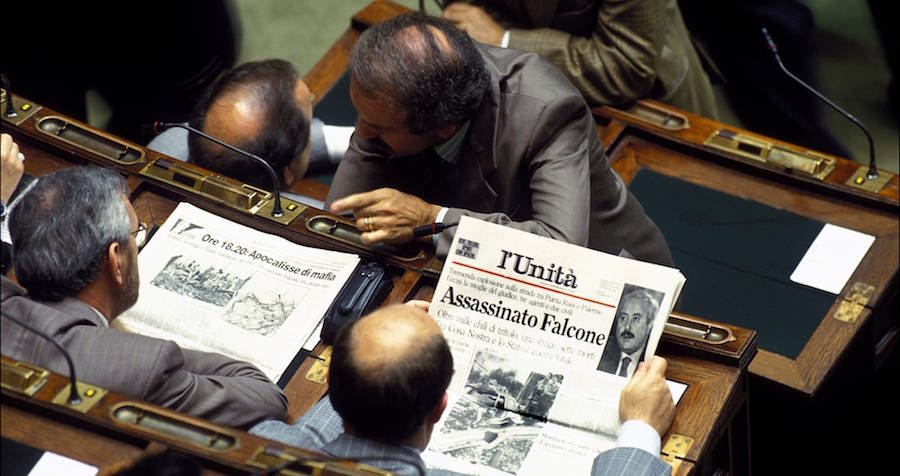 Livio ANTICOLI/Gamma-Rapho via Getty Images Government officials read about the assassination of Giovanni Falcone in Rome. May 1992.

Salvatore Riina, chief of La Cosa Nostra, assigned the task of assassinating Falcone to Giovanni Brusca, who was known as “lo scannacristiani” a.k.a. “the people slaughterer.”

The May 23, 1992 attack was executed on the highway from the Palermo International Airport into the city, which was along the route that Falcone took to get home during his weekly visits to Sicily. Brusca detonated the car bombs using a remote control, exploding a portion of the highway and killing Falcone, his wife, and three members of his security detail in the process.

The airport from which Giovanni Falcone had left is now named for him and he was posthumously awarded the Train Foundation’s Civil Courage Prize in recognition of his heroic actions that left him dead — and left an incredible mark on history.

After this look at Giovanni Falcone, check out these chilling images of the grisliest mob hits in history. Then, read about “Iceman” Richard Kuklinski — perhaps the most prolific hitman in Mafia history.